We stayed in an anchorage not far out of Kake, Alaska under the protection of a small island with a low slung conifer {Kerri corrected me} forest. For two days we swung around our anchor in Hamilton Bay while the work week ran it’s course. By Saturday morning the boat was prepared to take off on another weekend long adventure. Our first stop, and only a few miles away from our respite in Hamilton Bay, was the dual-named cove of Honkers Bay, or Goose Bay, depending on which navigation software you are using at the time. Personally I preferred Honkers, as it is just a much funnier word. We left for Honkers, motoring as usual as that is all Alaska allows, passing numerous sea otters who gawked at us in surprise as we interrupted their evening meals – floating on their back as they do – but not much else took place. 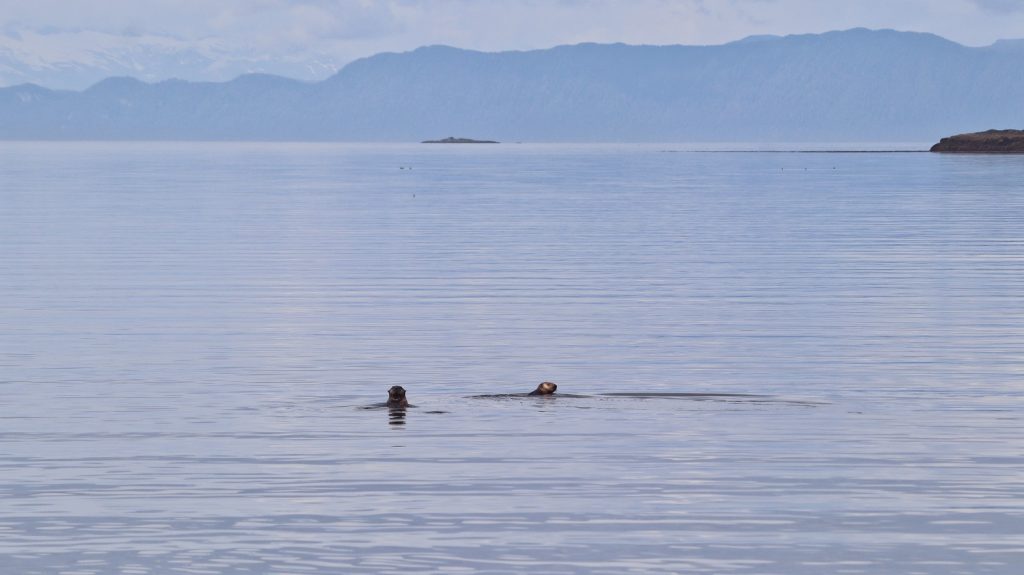 The entrance to Honkers Bay was quite narrow. Narrow is fine, but toss in shallow too and things can get hairy. To make matters worse, our depth gauge likes to read “—” a lot more than giving us an accurate reading, so tensions were higher than normal. Staying clear of the obvious rock to our port (left) I found myself too close to the shallow shores to our starboard (right). When I spied the gauge to get a fix on how deep the water was it gave me a definitive 7-point-it-doesn’t-matter. This is less than two feet from running aground again! A quick heading adjustment cured that issue and we safely dropped anchor a few minutes later in a tiny bay barely two football fields in size. We were all alone but for two floating shacks in the shallows, which we took the dinghy out to explore, startling yet another sea otter who had taken up residence in one. 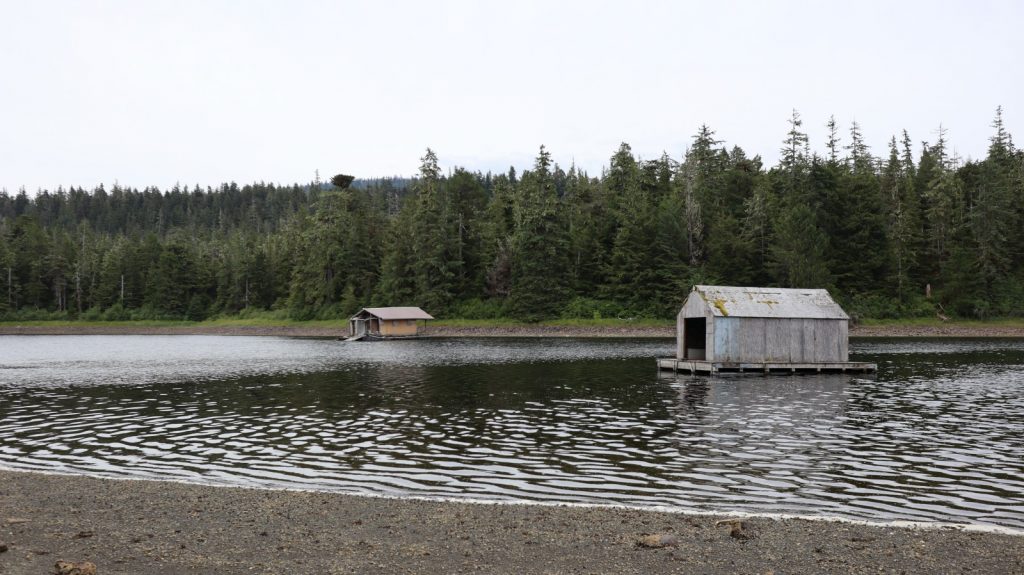 We took to the shores to stretch our legs and continue our run on living {some} off the land/sea. Kerri found no fungus, but did gather a handful of sea beans, which I reluctantly agreed to try in a stir-fry (they were okay in the end). The berries were plentiful so a bag was filled, which magically turned into a pie by the end of that evening. The crab pot she dropped came up empty a few hours later. And I took the time to supplement our firewood stores by burning threw our three chainsaw batteries, collecting a few fires worth of small branches. 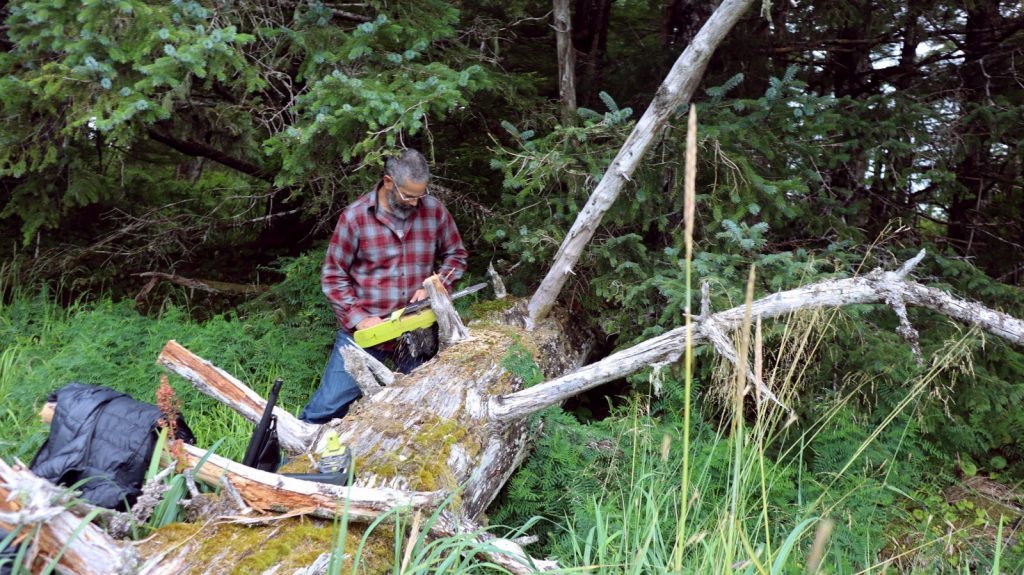 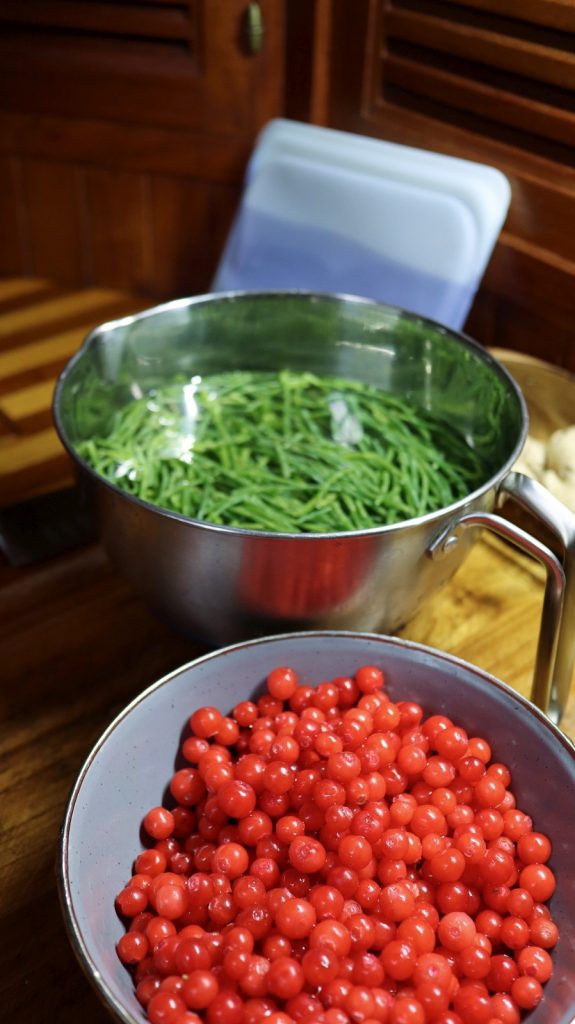 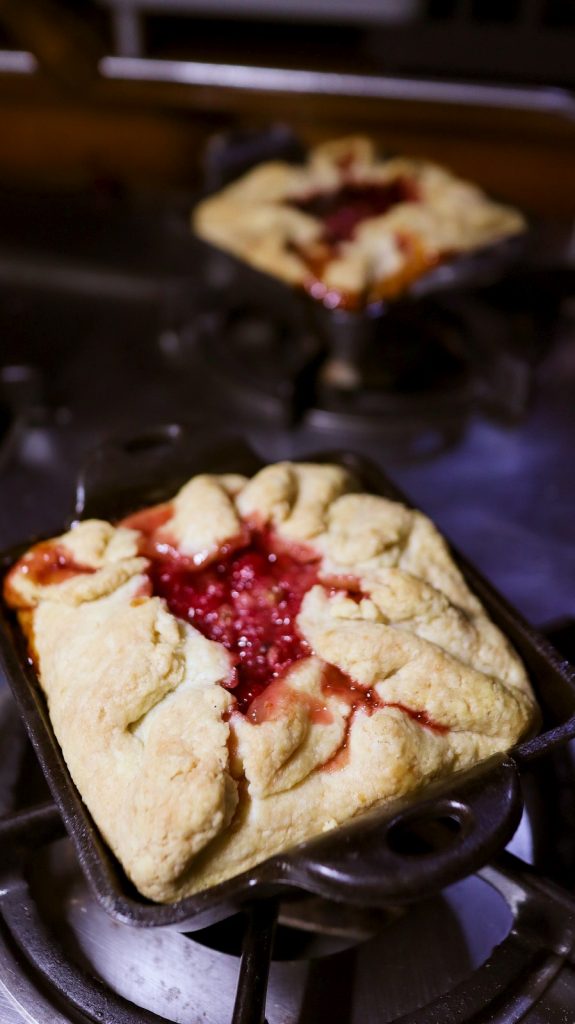 The guide book talked about the sheer number of bears that visit the shores here. We stayed alert during our time on shore, but we saw none. Not even signs of bears were found. That has been a running theme for us – not just this time in Alaska but also our trip up in the trailer in 2015 – we come across zero bears in a state full of them. Just our luck I guess.

We would stay only the single night as the plan was to go to Kake at the end of the weekend for a single day to resupply, shower, and do the normal household chores, then head back to an anchorage for the work week. We had another anchorage we wanted to visit before that return to city life.

Nature, she provides. Our self-sufficiency game was on this weekend. After a lot of shuffling of plans over the past weeks, due to work, weather, cell signals and such, our planned provisioning stop got pushed to the wayside, and by the time we headed out to explore for the weekend, the only fresh veggies we had left was a sad old bag of Brussels sprouts. But at our first anchorage, as we approached shore, what I thought was a football field sized blanket of sea grass along the shoreline was actually the biggest carpet of fresh sea beans (or sea asparagus, samphire, pickleweed, whatever you prefer to call it) that I’ve ever seen. Sea veggies carpeted the tidal zone. In this episode of Will Tim Eat It? Yes! I made an Japanese style salad of just the raw beans, to highlight their fresh, crunchy, salty goodness, and though he wasn’t a fan of that, he said he’s definitely use them in a stir fry or mixed into a salad with other things.
Cold weather also snuck up on us quickly this year, and our leftover pressed log firewood from winter has taken on some moisture, so we went out to procure some firewood from nature as well.
All in all, I’d gathered and made sea bean salad, huckleberry syrup, huckleberry mini-galettes, quick-pickled bull kelp stipes, tried to dry the fronds for kombu (failed), and Bladderwrack (another type of seaweed) “cheese puffs” (semi-failure). – Kerri