Rested and recovered, we are ready to get back to our lives living and traveling on our boat. Already supplies were being ordered and shipped into Friday Harbor – not only replacements to our broken items, but also some new items after lessons learned in the wide open ocean. We had some new estimated dates to start our hybrid inside passage route to Alaska. I say hybrid because we only plan to use the “inside” portion for the first half of the distance (up Vancouver Island) then crossing 300 miles of Queen Charlotte Sound and Hecate Straight over multiple days and nights at sail. This so we can do some overnight sails, and reduce a huge amount of motoring required to navigate the whole inside passage. 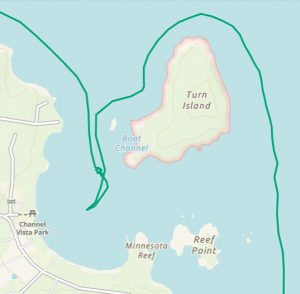 Forgetting how to plan a quick sail, we made our way up there at the worst possible time of the day – opposing the current – bah. We made it nevertheless only to find our planned anchorage on the north-west side of the island to be way too rolly (rollie? rollee? rolley? hmmm…) for our liking. We moved on to our backup on the south-western tip, but Kerri was not liking that we would be anchored in the traffic lane between the two islands. We moved on to our third choice near Channel Vista Park on the main island, but before we got anywhere near a clear spot to anchor the depth shallowed abruptly. Within just a few boat lengths we went from a safe depth to having less than a foot of water under our keel. Meriwether has never backed up so fast or straight before. We had just come so close to running our boat aground – which will happen eventually, but not this day. No, not this day.

We went back to choice number two, anchoring out in the open channel (img #2 below) and forcing any boat traffic to navigate around us. The current in this channel was strong, and would flip it’s direction multiple times each day. We had trust that our anchor would also flip and reset each time without dragging too far, and it did. Although, we did time our hike on the island at a time just before the first tidal change so we could be aboard Meriwether during that anchor reset just in case. 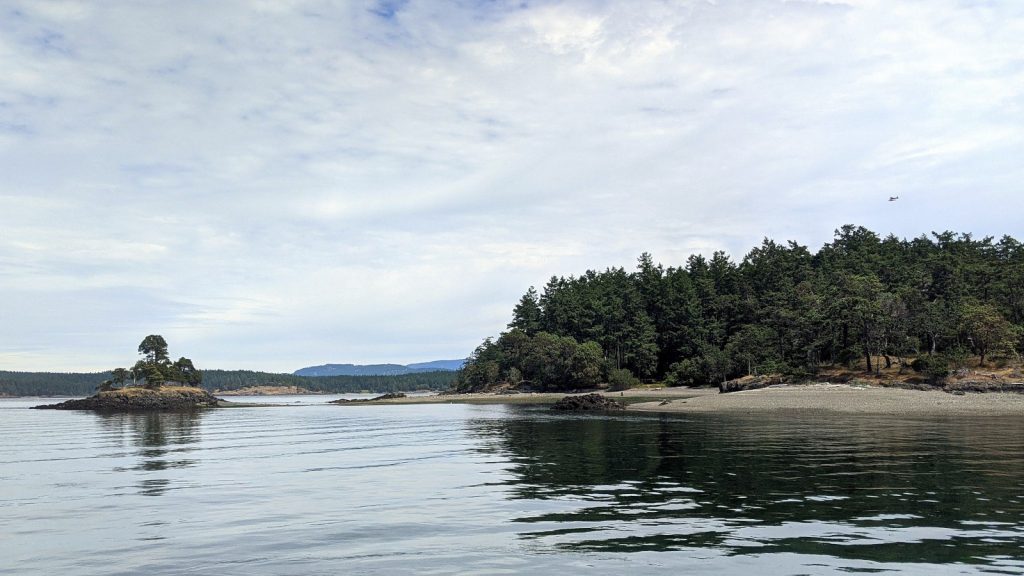 View of Turn Island from our anchored boat 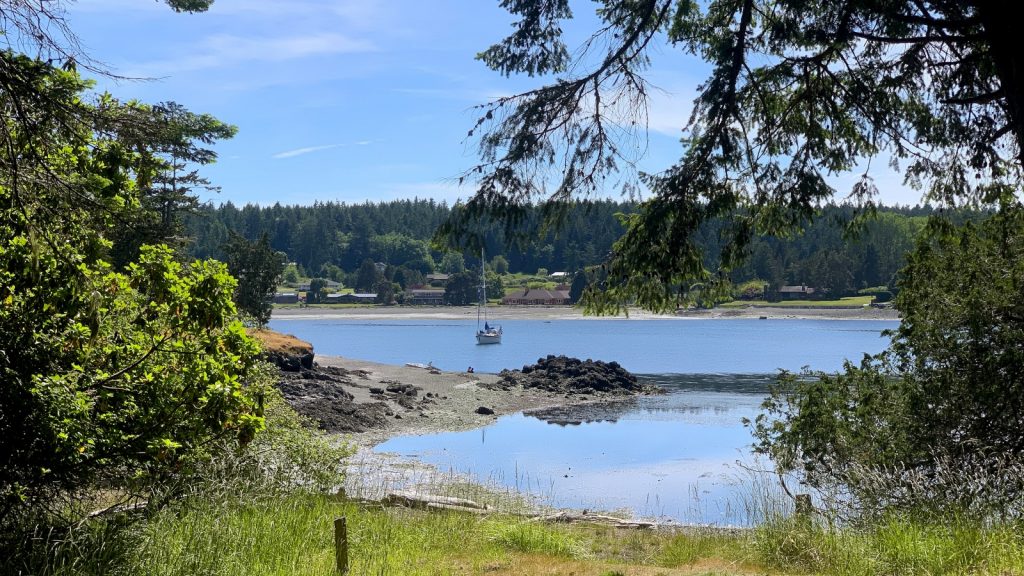 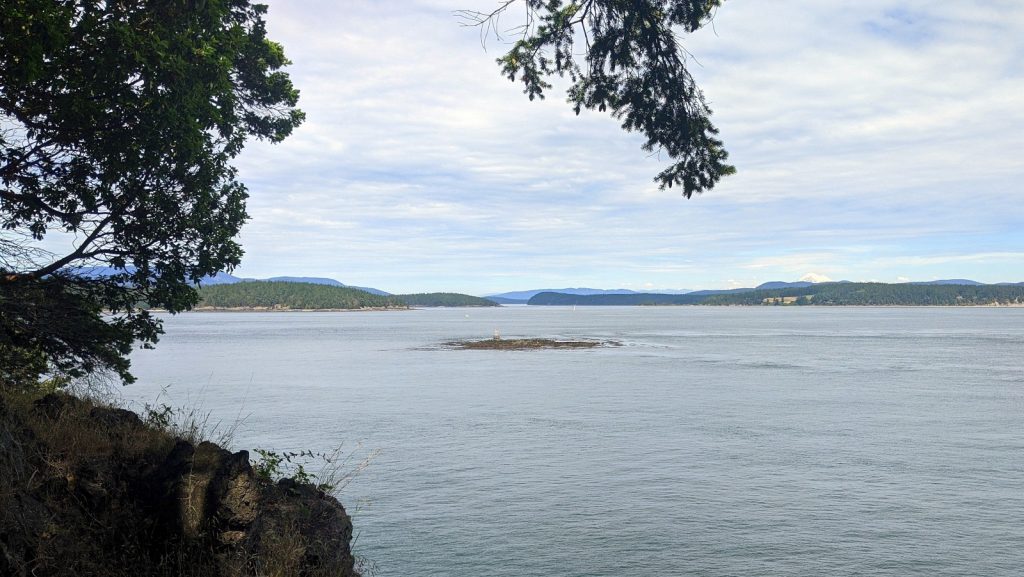 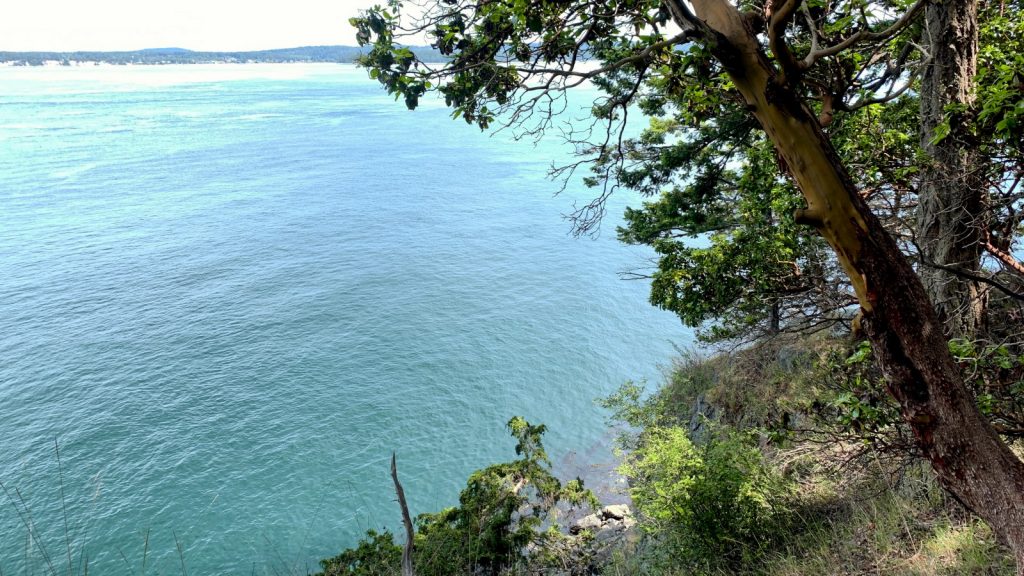 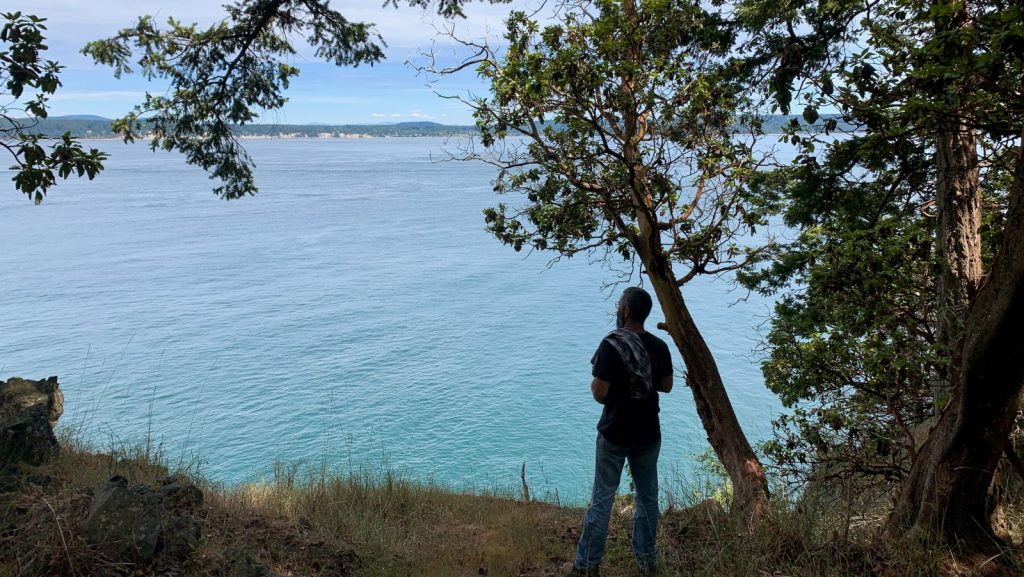 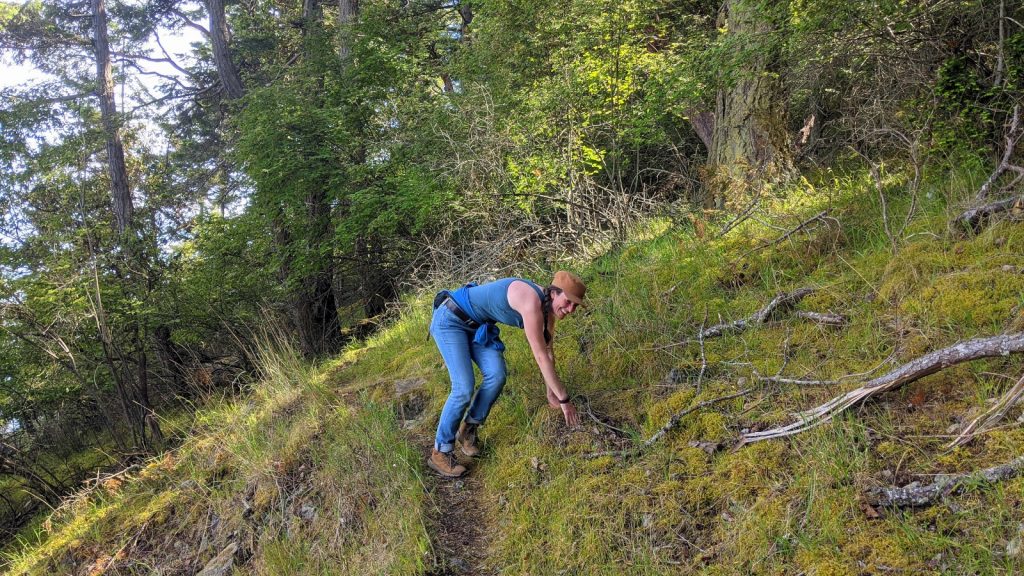 It was a steep cliff I tell ya!

Days earlier we had put ourselves on a list to [hopefully] get vaccinated during our time in Friday Harbor. Unfortunately it was looking like this was not going to happen, so Kerri did what she does; research more. Lucky she did too, because there was a walk-in clinic happening that night with the one-shot vaccination. Anchors up! Let’s go get vaccinated!

Kerri speaks! (via her social media) 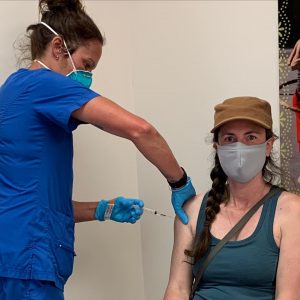 At last! It’s been a long slog toward getting poked for us two boat nomads in WA. The phase for our age group didn’t open up until mid-April in WA, and though we knew many people our age getting walk-in “leftover” vaccines earlier, it just wasn’t feasible for our slow meandering craft and no vehicle. Because it’s unreliable to schedule being at a certain place at a certain time when weather is your master, we also wanted the J&J one-and-done shot, but as luck would have it, it went on pause just about as soon as WA opened up vaccines for us. Then, it came back right before our planned passage, and we weren’t about to take it then immediately jump out to sea without knowing how we’d react. So we were planning to get it once we reached AK — they’re giving them away like they’re Oprah up there. But we’re back here in the San Juans, and Friday Harbor has a weekly walk-in clinic with J&J. Such a relief to finally have this done!

During our week at Friday Harbor we stayed out at anchor. Partly so we did not incur the costs of a slip, and partly because we are real live-aboards now – we don’t need no stinkin’ dock! Our anchor would get us by just fine in this protected bay (it has held true in much worse conditions) and we far prefer the overnight feel of a boat at anchor than tied to a dock.

Friday Harbor is a busy place and a busy anchorage. Boats come and go regularly, as do the sea-planes which are quite loud. Depending on the wind direction, the planes will take off or land directly between anchored boats – exciting, but scary to watch. The only real issue was the ferry – which moored only a couple hundred yards away and are quite regular in Friday Harbor – would occasionally (though not every time) blow its horn when departing – startling the snot out of us both each time.

Being such a busy anchorage there is sometimes drama. Occasionally a fellow pleasure boater will anchor out of sync with everyone else and cause all sorts of chaos. This happened late in our stay with one boater anchoring opposite to all other boats, then paying out way too much rode (anchor chain and rope). They then went ashore only to have their boat slowly drift towards another (our neighbor), coming within a boat-length of hitting, which is way too close. If there had been a breeze, there would have been a collision. I was extremely happy that when these folks were originally anchoring I popped my head up to let them know they were too close to us. Thankfully they listened and move further away or it would have been us they would have drifted into. Oh the drama’s of boat-life, eh? 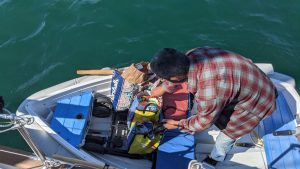 Before the end of the week the new fridge had come in and was installed and new groceries filled the cool box, laundry and showers were completed, our diesel and water tanks were filled, and more than a few small boat-projects were also done – because the list never ends. Twice each day I would dinghy to shore and walk across town to pickup boxes and other tools and/or parts to complete tasks. Life near a working town is never a relaxing time for me. My back was still in pain from my incident weeks back, and all these boxes and projects were not helping the matter. I was eager to get out of Friday Harbor as quickly as possible. 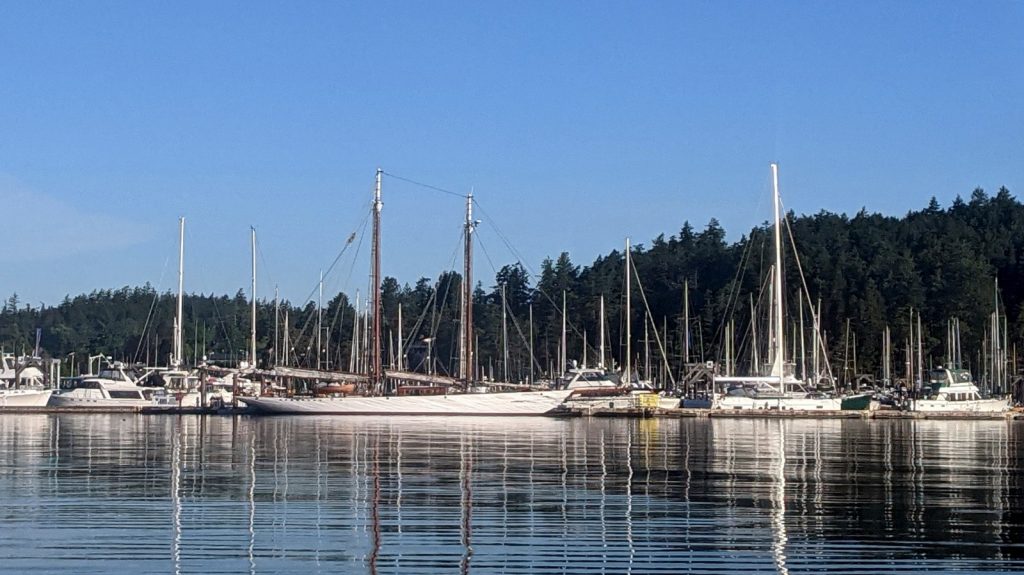 The Adventuress was in town 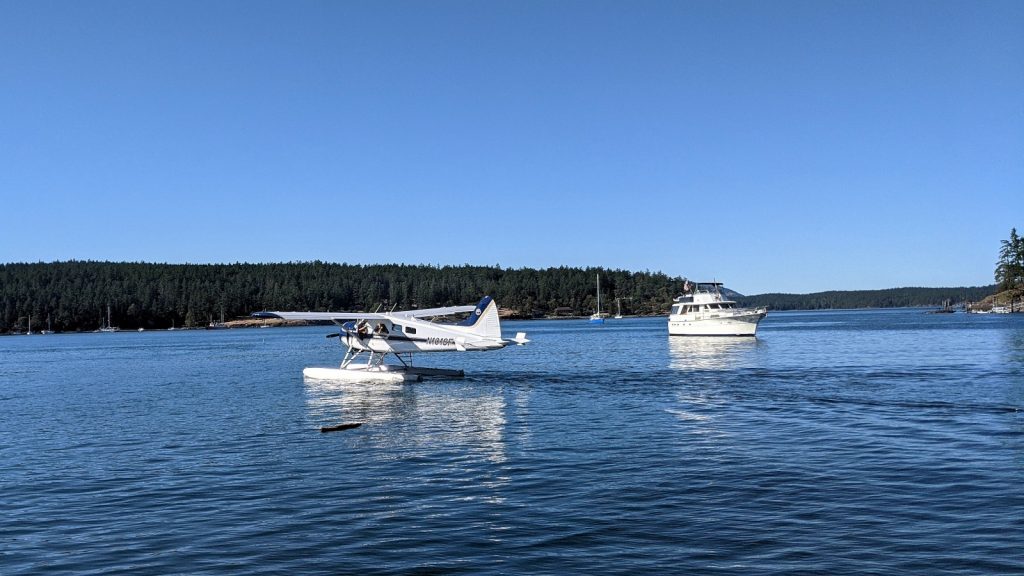 A seaplane taxis right beside us 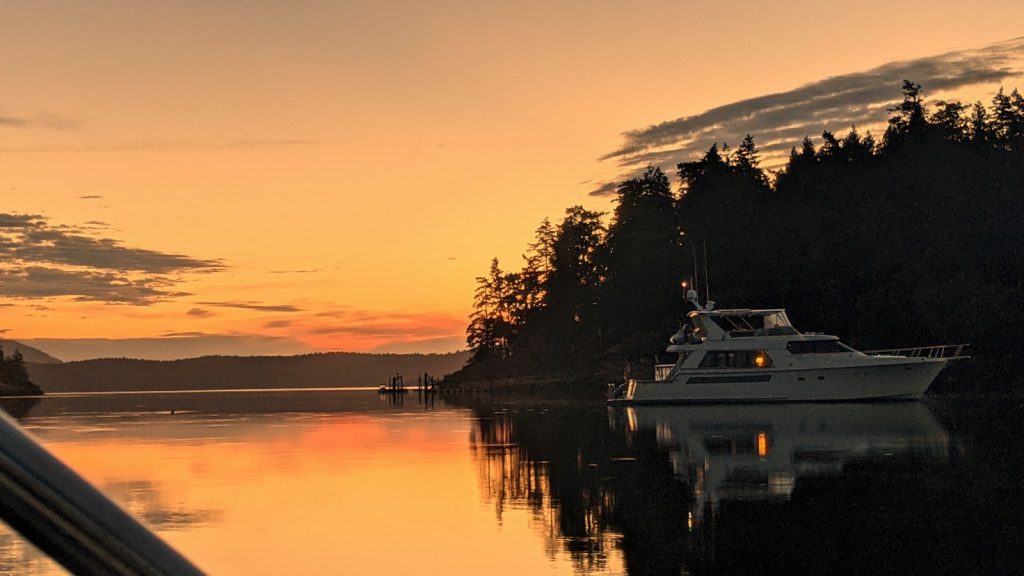