Mugged by dolphins and mother nature

Kerri took the first watch of our first overnight at sea. From 10 PM to 1 AM she ensured all was well as we sailed west (with a smidge of south) with only the moon and an audio book to keep her company. She did tell me that she passed by a few ships during those hours, but I can not verify such wild claims. She handed the boat over to me not long after 1:30 AM. A couple hours in to my watch the moon left me, but the entire milky way dropped in for a visit. I had forgotten that this was one of the things I wanted to see the most when at sea; 360 degrees of stars with absolutely zero light pollution – we were 40 miles from land. It was one hell of a sight, and as I write this days later I wish I had spent more time gazing up into the stars that night.

Sunrise came at 5 in the morning. I woke Kerri who came up and assisted in completing the tack to face north-ish. Unfortunately, our northern heading had a whole lot of east in it… nearly heading backwards on our overnight track. It is so deflating to tack only to find that you turn nearly 180 degrees and have made little to no headway towards your destination. On top of that deflation, Kerri informed me that she could not take over for me. She was still incapacitated from sea sickness, so much more than either of us thought was possible. We have been at sea for only 24 hours and I have personally sailed 21 of those hours and have only gotten 3 hours of sleep in the past 27 hours. I continued sailing while Kerri went back down below. 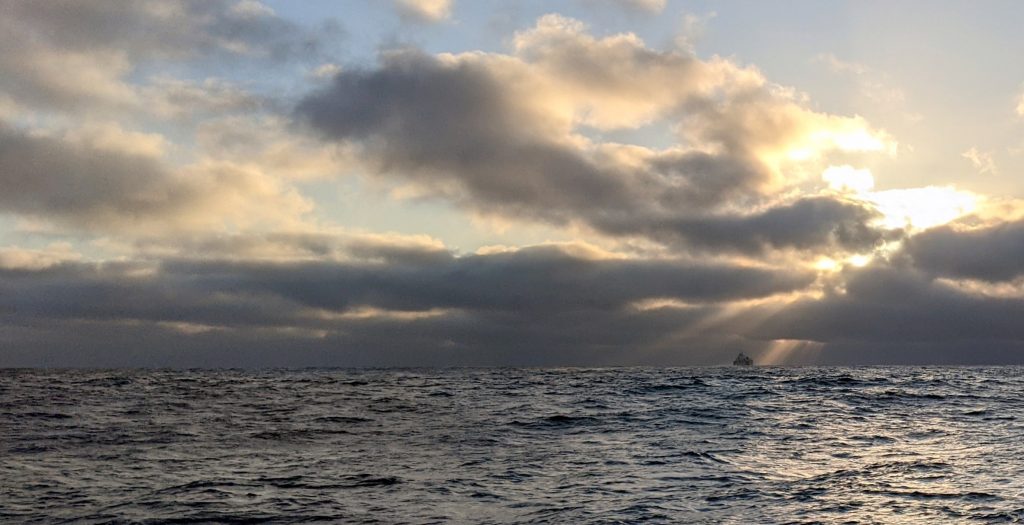 It wasn’t long after that I got one of those iconic experiences of being at sea; a pod of dolphins swam with Meriwether. I say a “pod” but that word just doesn’t do it justice. Literally hundreds of Pacific White Sided Dolphins were swimming with us, some practically within arms reach, stretching hundreds of yards in all directions. I could see them bow riding when I looked over the dodger, but I dared not step out of the safety of the cockpit even for that. For more than a half an hour these beautiful creatures escorted us. Having them beside became such the norm so that I stopped paying them any attention, and the next time I looked up they were gone. It was just me and the sea again.

A couple hours later I would get the latest gribs (weather files) in over the sat phone and my heart broke. Our sail plan was being torn apart by mother nature – and she didn’t give a rats ass of care. She had decided that the wind forecast would be re-written to be strong(er) and even more in our face, at least for another three days. While I can live with the uncomfortableness of beating against the wind, this also meant at least three more days of Kerri being incapacitated and me sailing 20+ hours each day by myself. This was neither achievable, or safe. We had to make the tough decision of whether to continue or to call off our passage before we got to a point that we could not do. After a discussion, we both felt it was the right thing to do to swallow our pride and make a run for one of a few pre-marked safe anchorages along Vancouver Island’s western shoreline. Although it was still 10 hours away via sailboat, we could at least arrive there before the wind would pick up too much that evening.

Thanks to the heading change we were no longer beating against the wind and waves together. At least the ride became increasingly comfortable. The side effect of calmer seas is that Kerri could come out of zombie mode. As lunch time closed in on us Kerri came to relieve me. I was asleep even before I made it down the companionway. She woke me a few hours later, just off the Canadian coastline where we had arranged to shelter from the wind for a night. I was feeling a mix of emotions; tired as all that is holy, glad to be able to anchor and sleep, sad that we turned back, and worried about what the future would bring. I was even having serious doubts if sailing was still in our future at all. If we can’t go in the oceans there is no reason for this to continue. Maybe things would feel better after a nap… 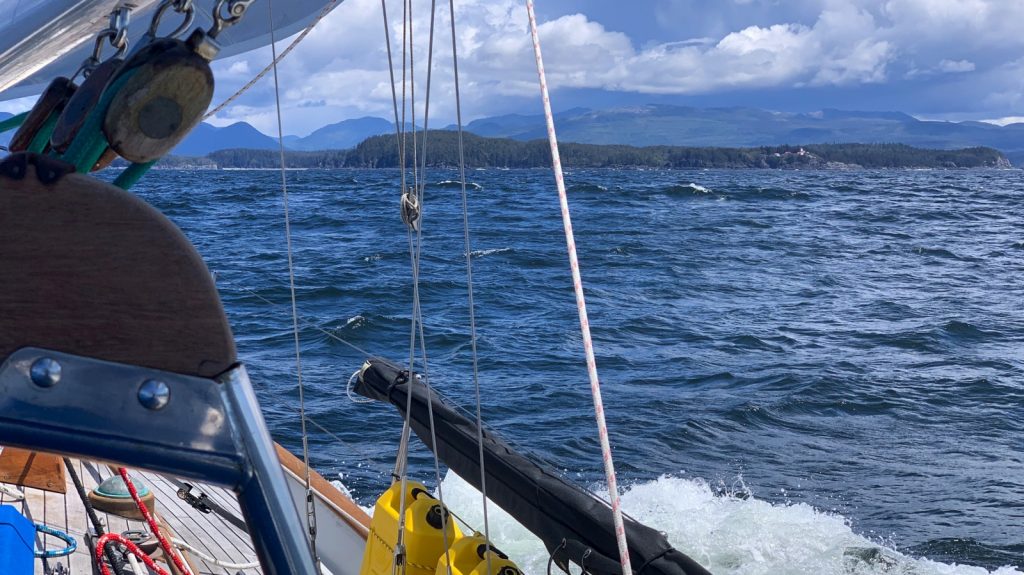