It was still an early morning departure but we were ready after some good sleep and minor adjustments to Meriwether’s storage the day before. Kerri was back from the dead and ready for what was ahead. We raised anchor and left the safety of Neah Bay, back into Juan De Fuca and pointing ourselves towards the Pacific. This time we were determined to break free of the Straight and get out into the wide open Pacific. 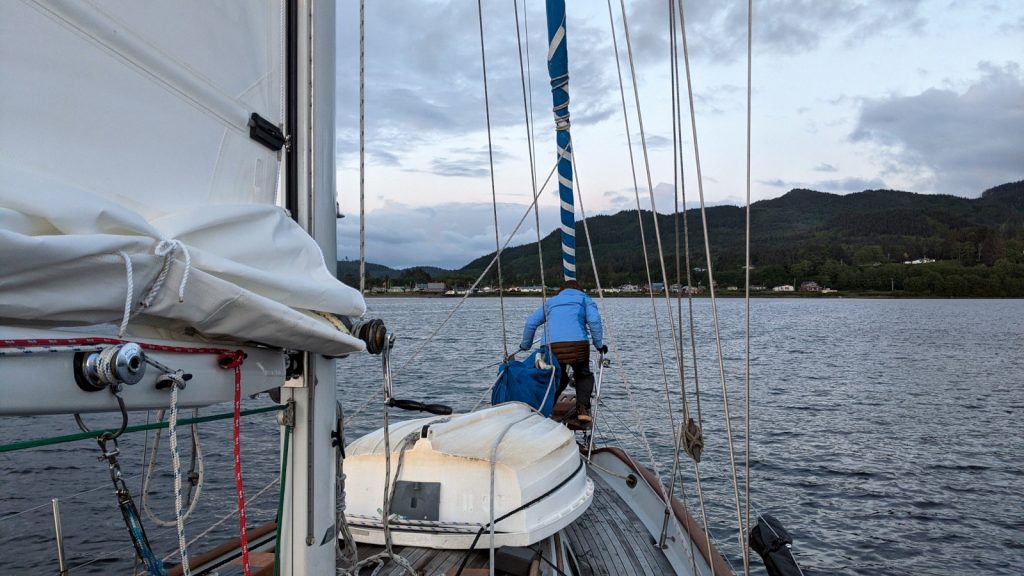 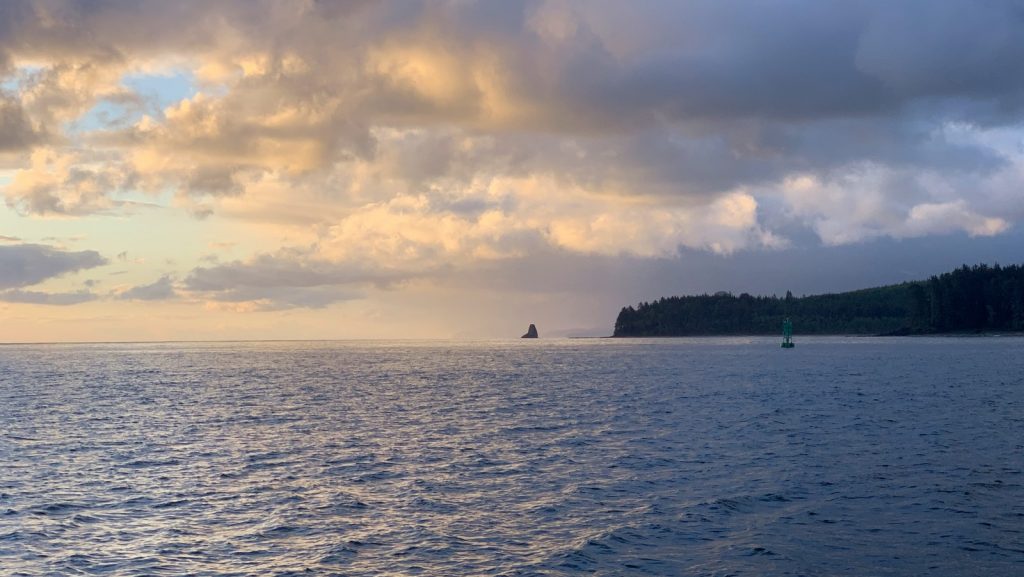 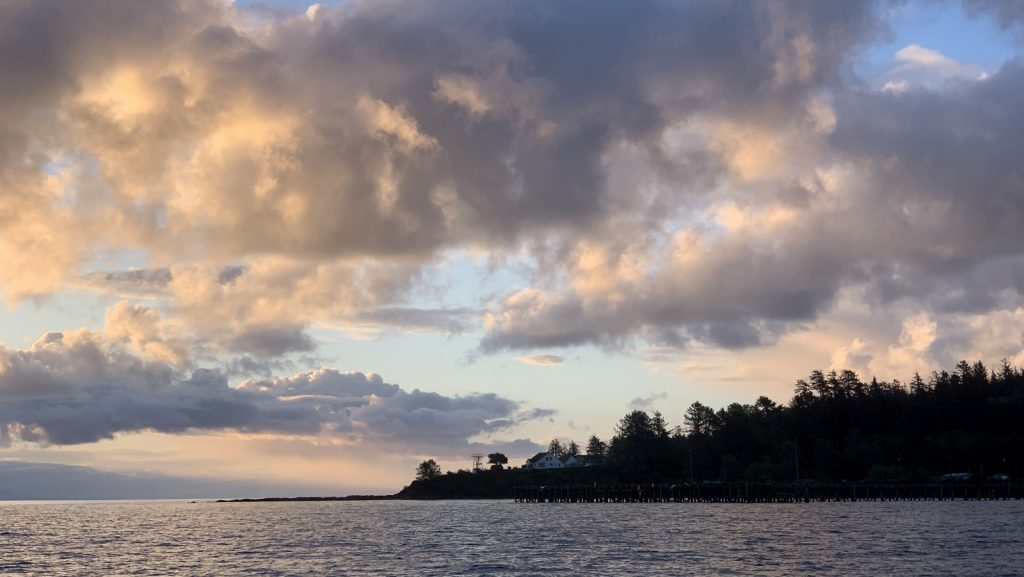 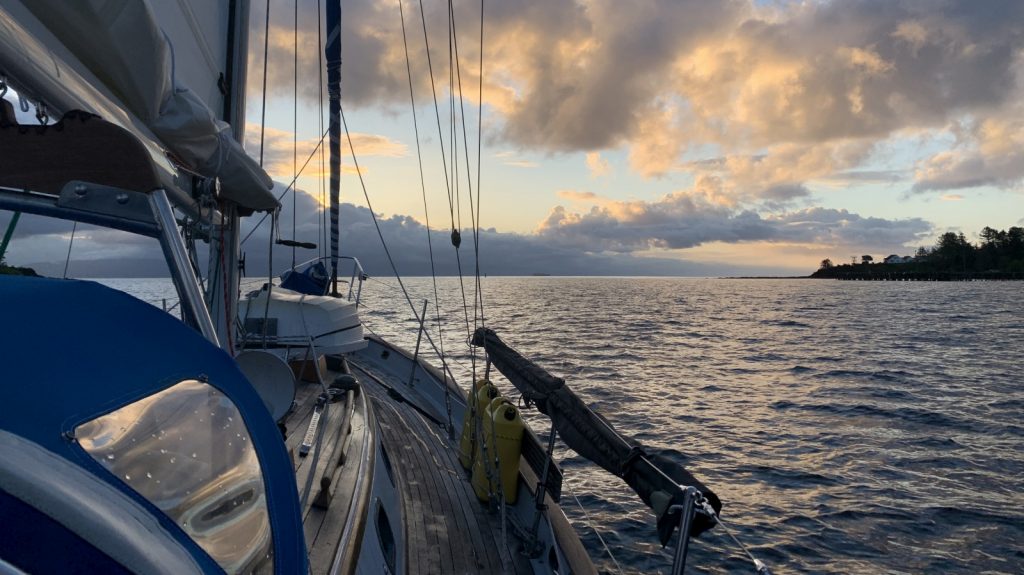 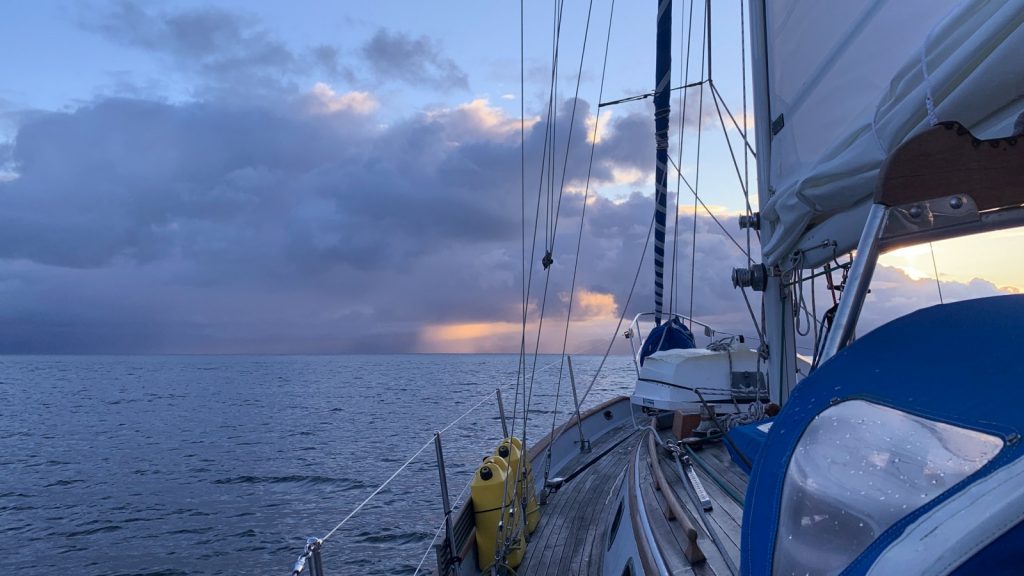 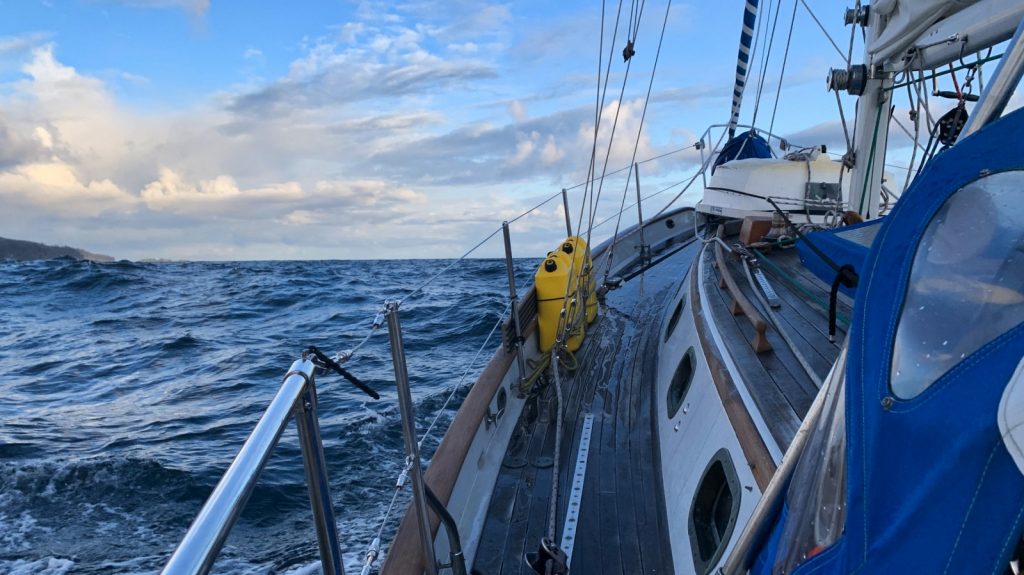 The miles crept slowly by. Even with the current now slack – no longer with an opposing wind – the ocean swells were still 6-10 feet making for a bumpy ride on our way out. We still had not begun sailing as we were just trying to get clear of the convergence of shipping lanes at the mouth of the Straight. Our main sail was up only to curb some of the rocking caused by the swell and waves. It took about 8 miles of rough riding to finally get clear of the worst of it, but not before we would have a serious scare: 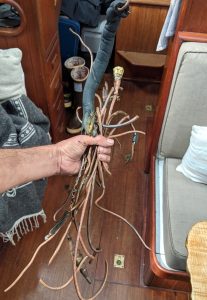 As we bucked up and down one of the large swells there was a loud bang under our feet and the engine was making a horrific noise (caught in video at the bottom of this post at 0:36). I immediately put the gearbox in neutral and the noise subsided. My hyperactive brain told me that we just blew up our gearbox, only two hours offshore, and right in the middle of the shipping lanes. I quickly begun digging my way down to the gearbox, through hundreds of pounds of gear stored in our lazarette, and found what I thought was the culprit; our fridge compressor. It was no longer where it was mounted on the bulkhead, being ripped from it’s perch. Looking towards the prop shaft and gearbox I saw that the entire length of the fridge’s copper pipe was now wrapped around the prop shaft, along with our oil soaking boom which resides at the bottom of our bilge. As luck would have it, the boom was launched high enough to grab the prop shaft, getting tangled, and pulling all the copper hose into the bilge and around the prop shaft with it. It took 90 minutes to clear the mess, and as luck would have it the wind would die so we could not sail either. We were at the mercy of the swells while drifting towards Canada in the middle of a shipping lane. Not how we wanted to start this voyage. 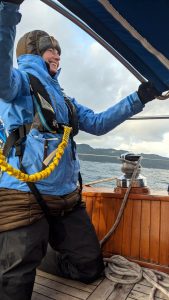 Fixes were made and we got back underway, knowing that all the food in our fridge would be spoiled within 72 hours. Nevertheless, hopes were still high that we can make 50 miles to the North West before sunset, where we could then turn to the West-ish for an overnight heading. The wind made a return shortly after the whole ordeal and we were able to get to the sailing part of sailboat life. The wind speed was great for sailing with 15-20 knots rushing through the sails pretty consistently. The direction of the wind was the problem; directly from the heading we want to go. This seems to be our curse. No matter what the forecast says there is always a pocket of wind (the tiny area that we are in) that the wind is at its worst heading. Jokingly, we discussed renaming our boat to “20 knots on the nose…. always”. We are extremely experienced at close-hauled and beating against mother nature, but it is not how we want to spend the next week at sea. But, this day we would spend tacking every few hours, beating against the wind, making little overall headway towards our Alaskan destination. This hard sailing brought Kerri’s sea-sickness back in full force, and by afternoon she was down below and effectively incapacitated again. 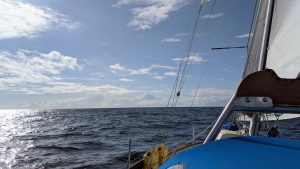 Late in the evening the swell calmed enough for Kerri to come up by sunset and even enjoy a couple hours without feeling completely miserable. The seas, though still with a fair swell, felt nice, and the wind was ideal even though from the perfectly wrong direction. This is what we needed for another seven days, just at a different angle. Spirits were lifted when a pod of humpback whales slowly cruised past Meriwether. While one or two came within 100 feet of us, the majority stayed at least a quarter mile out. My reaction time was not up to snuff to get any good photo or video of the encounter, but it was still damn nice to see the beasts. 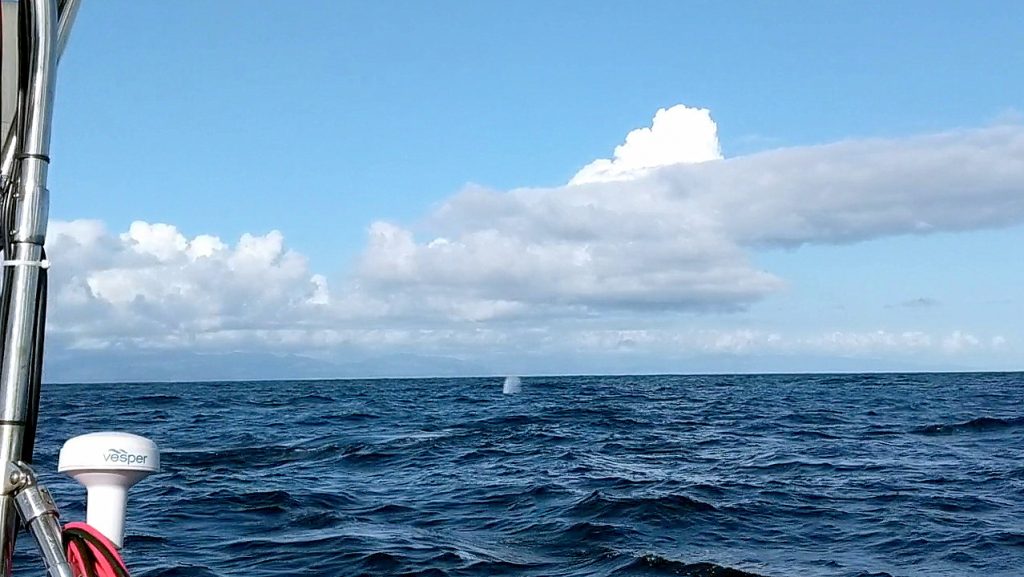 At sunset (about 40 miles up the coast of Vancouver Island) we tacked one more time to hold a westerly-ish heading through the night.  Since I woke at 3 AM, had been sailing since 6 AM, and it was now closing in on 10 PM, Kerri worked up the energy to kick me out of the cockpit and take over so I could get some sleep. I do not even recall making it horizontal before I was completely asleep with the sounds of the wind in the sails and the Pacific rushing past.