It happened regularly when we were land based nomads; that “I’ve been here before” feeling. Once we anchored in the waters just outside of Port Hadlock, chilled for a night, then set out to the laundromat just up the hill the following morning, that feeling came around once again. Yep, we have been here before in the van in 2018, and I took the bus up from Port Ludlow last year to do laundry. I thought Port Hadlock was going to be all new for us, but it turned out to be another repeat town for us, we just didn’t know it from the water. Nevertheless, we got our laundry done and a bit of provisioning (that’s what we sailors call grocery shopping, because we are cool like that) at the store next door. The town itself it quite small. Stores line the main highway for only a few hundred yards in all four directions of the one major intersection, and that is it. Besides the grocery and laundry, there is a hardware store, which proved useful, as well as a single fuel station which had a corndog-and-popsicle lunch I was in need of – truly. 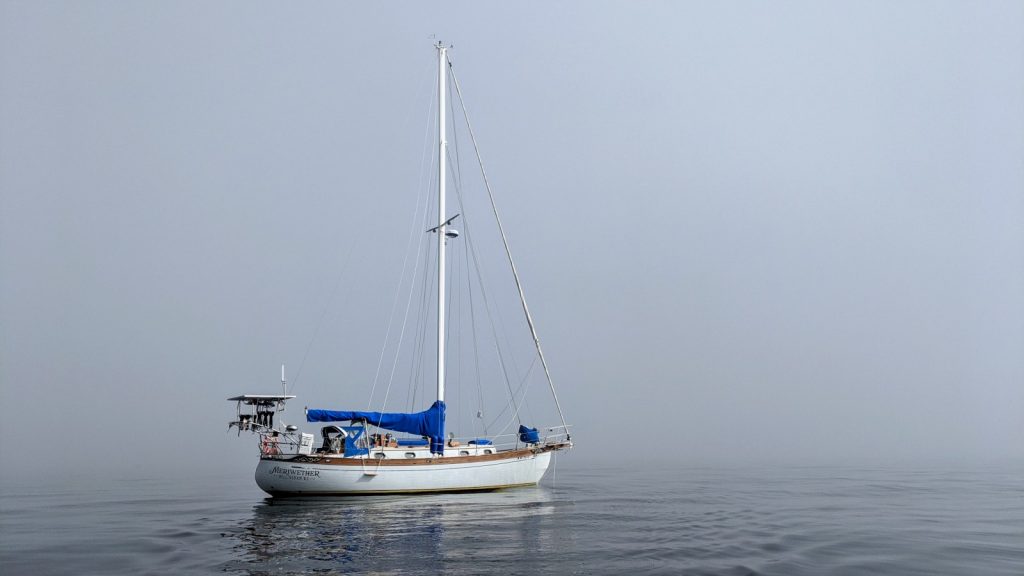 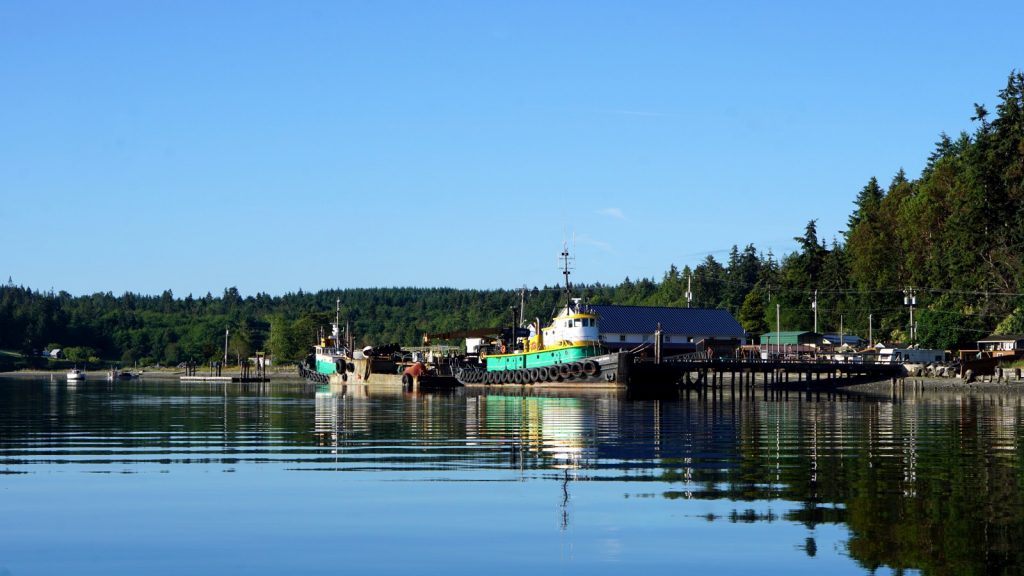 During the work week we did our normal things. Kerri tapped away on her laptop, and I set about replacing as many deck bungs and caulking as I could during the dry days. It seems to be a never ending task – the bung replacement. No matter how thorough a job one does, more bungs start to show their age the very next day. It is why these boats with teak decks are nick named “leaky teaky”, as there is no such thing as a 100% leak free teak deck boat. By early afternoon of each day our battery bank would be topped off and I’d get to fire up the water maker which would run for an hour or two, making water at a rate of 8-10 gallons per hour – making more water in a single hour than we use in an entire day. This thing is amazing. 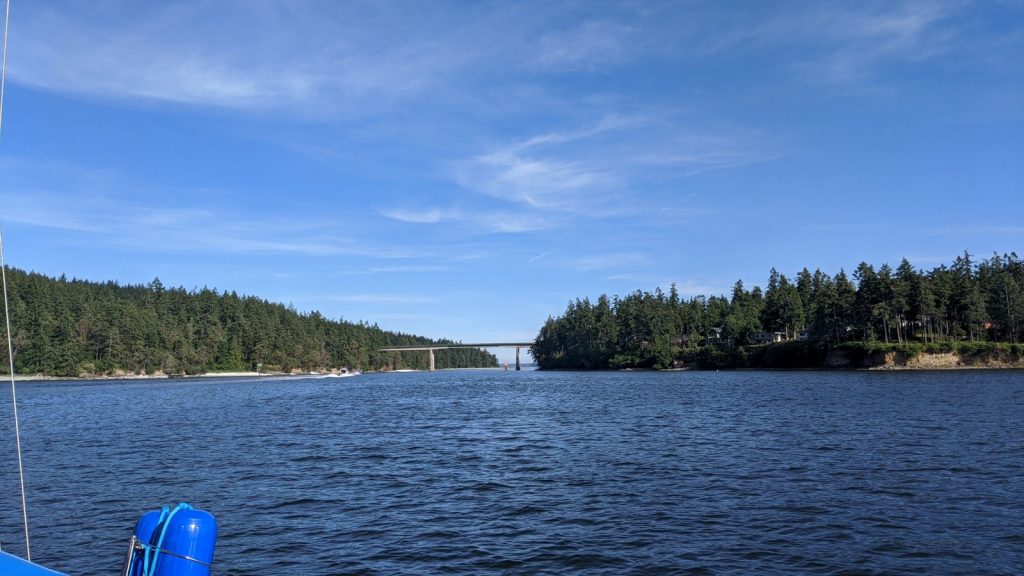 A canal with a low slung bridge lay to our south which we planned to sail the upcoming weekend. I say low slung, but we researched it numerous times over and it is advertised at 58 feet above the high-tide water. Meriwether’s mast is right around 55 feet off the water. Even though all the facts agreed that we would fit, we still wanted to go under the bridge at low tide, which would give us just a little more clearance. And that wasn’t the only thing to consider, as the current flow is exaggerated through these tight canals, reaching 6 knots and above at the worst of time. Not only did we want low tide, we needed a flood tide so we did not have to fight against a strong current. Thursday afternoon was to be the best day and time to pull it off so we set out to motor the three-quarters of a mile to the other side of the canal.  Watching our mast as we started under the bridge was likely the most frightening few seconds in my sailing to date. I knew the math, but none of that logic stuff matters in those few seconds.

The day before we left our initial anchorage, boat traffic in the little bay picked up to an unusual pace compared to the first few days. Now, boats were speeding out into the waters, dropping crab/shrimp pots, then speeding back to shore to load up on more pots to repeat the processes. Neither patience nor courtesy towards us was on these fishermen’s mind. Every boat that sped past would leave us a few-foot-high wake to deal with, only to be repeated a few minutes later when he returned to shore. By early afternoon the entire bay was filled with colored buoys marking the dozens upon dozens of pots below. One fisherman even had the complete lack of awareness to drop his pot only two boat lengths directly in front of us. I called out to him explaining that we were lifting anchor in a few hours and that he just dropped his pot pretty much exactly on top of our anchor, and that I may be forced to cut his line to prevent it fouling my prop. He thanked me for the warning and left the pot in place, because blind expediency is apparently what catches the most shrimp. In the end, I did not have to cut his line, but that call was made by only a few feet.

We arrived on the other side of the canal and set anchor in the only area not also filled with buoys from the same fishermen. It was a prettier view from this side of the canal, with a campground and park as our backdrop. The local wooden sailboat – Longdory Dragonheart – sailed through the canal after us and past us a few times full of kids eating pizza and having a good time.

The wind picked on our second and final night, but we mostly slept right through it. I even recall waking a few times in the night thinking, “this wind would have kept me awake all night last year”. Now, in our second year sailing, we just don’t seem to lose sleep as easily. Go figure. 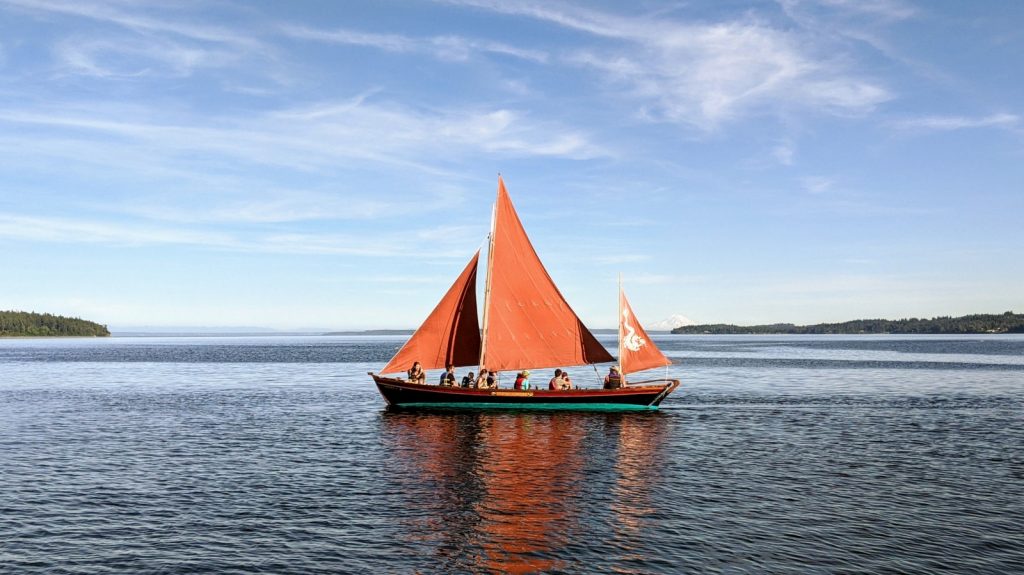