Hunter Bay proved to be a peaceful place for the work week. Well sheltered, our boat barely moved all week no matter what the wind was doing just outside the bay, but we were ready to move on. Saturday was advertised as no-wind and drizzle, while Sunday was partly cloudy with good wind speed and direction. So we decided to do our crossing of the Juan deFuca Straight on Sunday, following a rare ‘do nothing’ day. In fact, with the forecast 15-20 knots of westerly wind and damn perfect timing with the tidal currents, we expected to sail at record speeds over our 30 mile route. 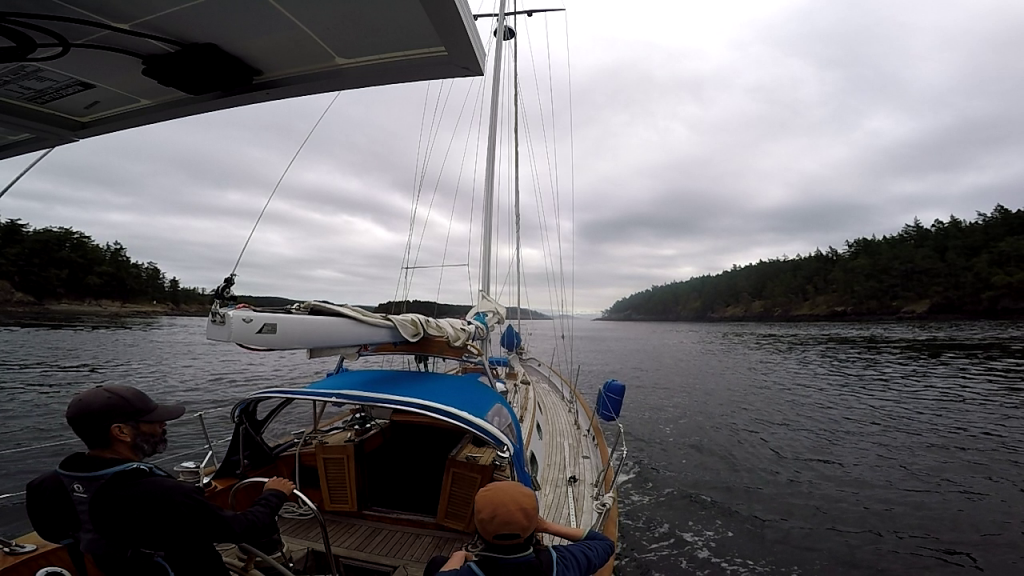 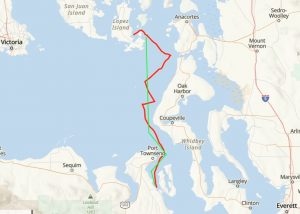 The wind in the Puget Sound, however, likes to play games. If there is one guarantee in a sailor’s day here, it is that the wind will do that one exact thing that you were hoping it would not, no matter the forecast. This day would be no different. As we motored out of Lopez Pass and into Rosario Straight we expected to turn south and have the wind on our beam (side). Instead, the thick-headed wind had decided to come from the south – directly where we wanted to go. This meant we would have to beat against the wind, increasing the mileage out on the water. Not that I minded the extra distance – it is doing our resume a lot of good – but I was very much looking forward to something other than close-hauled and tacking, which we do 90% of the time.

Not a great deal happened in the first four hours other than being heeled over and sailing nicely. The water that day had dimension to it, with some rolls, waves, and all around texture. I think Kerri and I both seek out slightly rougher seas/winds each time. We want to experience harsher sails so we gain the experience from it. All in all, just some good sailing along with a few other boats around which we would have to account for here and there. All good reminders and practice of the rules of the road. Kerri was at the helm for the vast majority of the day – she is the better helmsman of us – other than a few short periods where she had something else to accomplish. We are learning more and more about the importance of extending each tack as far as possible. An extra quarter mile further on our first tack would have meant we could have slipped past Smith Island and avoided our second tack all together. We were forced into that tack, or run aground at the island, only just being unable to skip past. Not that we find tacking a difficult process, even with all three sails, but the less physical stuff we have to do the better over a long day of sailing. 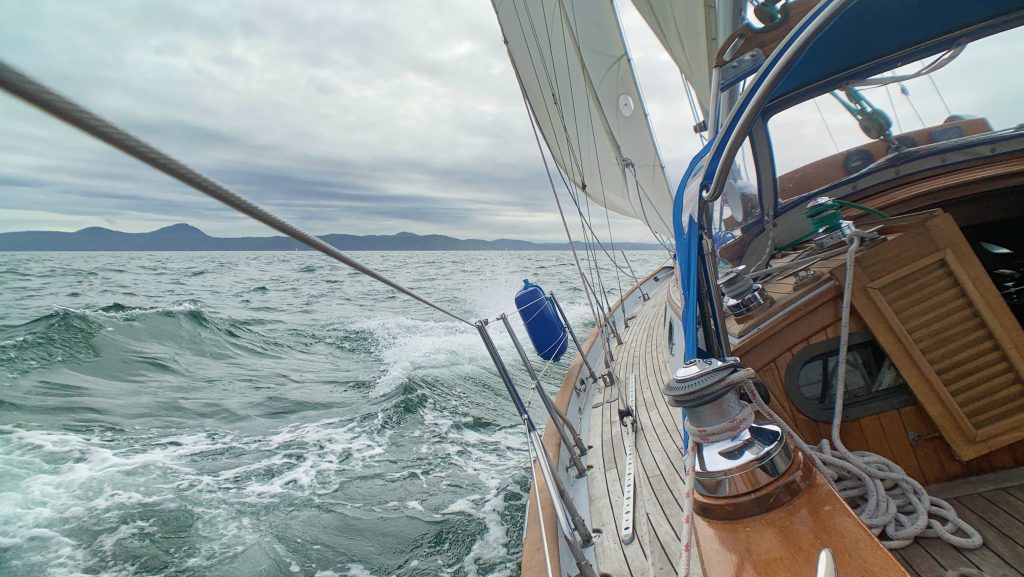 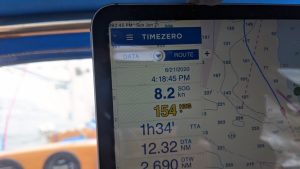 Nearing five hours into the day, we started coming to Point Wilson. It was here, just 11 months ago, that the wind set about teaching us a few important lessons – the hard way. We had not forgotten, and were on our tip-toes in hopes to avoid Wilson’s swinging elbows this time around. In the end, the wind didn’t try anything spectacular, but the fast moving current in this area sure threw some tumultuous waters our way. This would likely have frightened us last year, but now it was just pure excitement. Water crashing over the bow is a welcomed thing now. Bring it on! Between the wind and the 4+ knot current, Meriwether was seriously hauling canoe-shaped-ass at 8+ knots.

We were just about to make our run across the shipping lane and into Port Towsend Bay when a tanker became the discussion of the hour. Kerri had been tracking it on our navigation for some time, and now that we needed to cross the lane, it was too close (meaning within a mile or so). I considered using the radio but didn’t, simply out of VHF-shyness. Then we both heard the VHF radio, “Sailing vessel Meriwether, Sailing vessel Meriwether…“, in the clearest voice we have ever heard come through it. The tanker Captain had hailed us (this AIS system is awesome!), causing me to get over my shyness and converse with him. I confirmed that we would cross to his stern and he would give us as much room in the lane as he could, so we could continue into the bay without having to change course by much. In the end, we slowed while he slid up beside us. We then turned into the bay, crossing his wake behind him… way behind. Sailing life moves so slowly that it is sometimes difficult to work out closing speeds, so our paths ended up not that close at all. 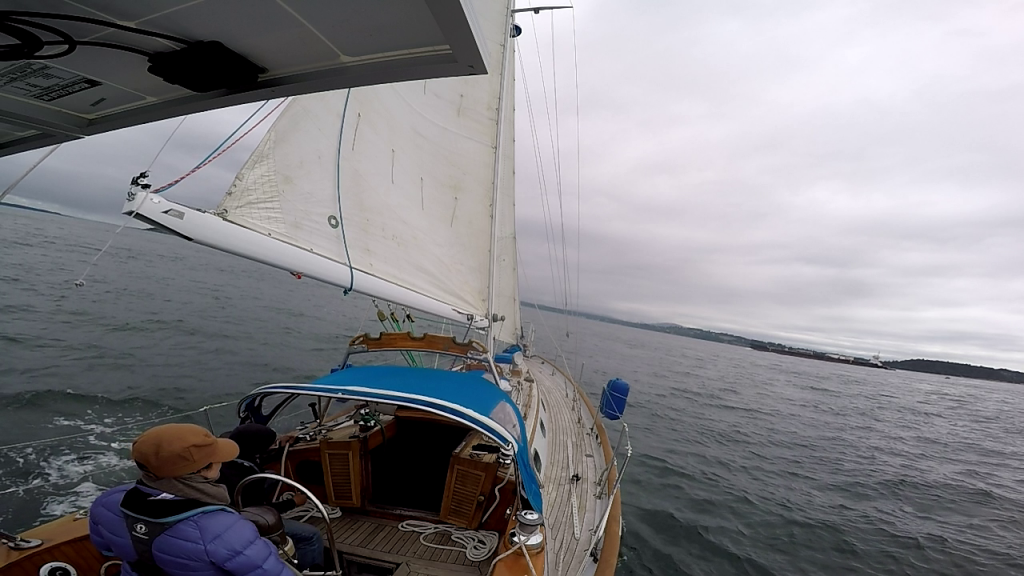 Things began to relax as we sailed past Port Townsend. As much as we would have liked to have pulled into PT and stay, with most things still closed there wasn’t much of a draw to stop yet. We would wait until later in the year. We sailed on towards Port Hadlock, another hour to the south. Once we were heading mostly down wind, I dropped the staysail and packed it away. Then Kerri and I set about dropping the main to flake and cover it in the quiet of a jib-only sail. By the time all the work was complete, we were right on top of where we wanted to drop anchor. At the last moment, I turned towards land and furled in the jib, and only at this moment did we fire up the old diesel motor. As tempting as it was to anchor without it, I’m just not there yet. Especially at an unknown anchorage with a dozen boats to our lee (down wind) on mooring balls.

When the day was complete we were on the water for eight hours and fifteen minutes and navigated 36.2 nautical miles which is the largest distance we have sailed in a single day. We have sailed longer time (9+ hours), but did not make as much distance in that sail. It felt good to utilize our increasing knowledge and the upgraded systems on board to easily set a new distance record. We still have not figured out how to relax though. With us both on alert at all times, it wears us both out by the end of the day. On these longer hauls, we do need to find a way for one of us to “turn off” and do something else; read, nap, etc. One day… 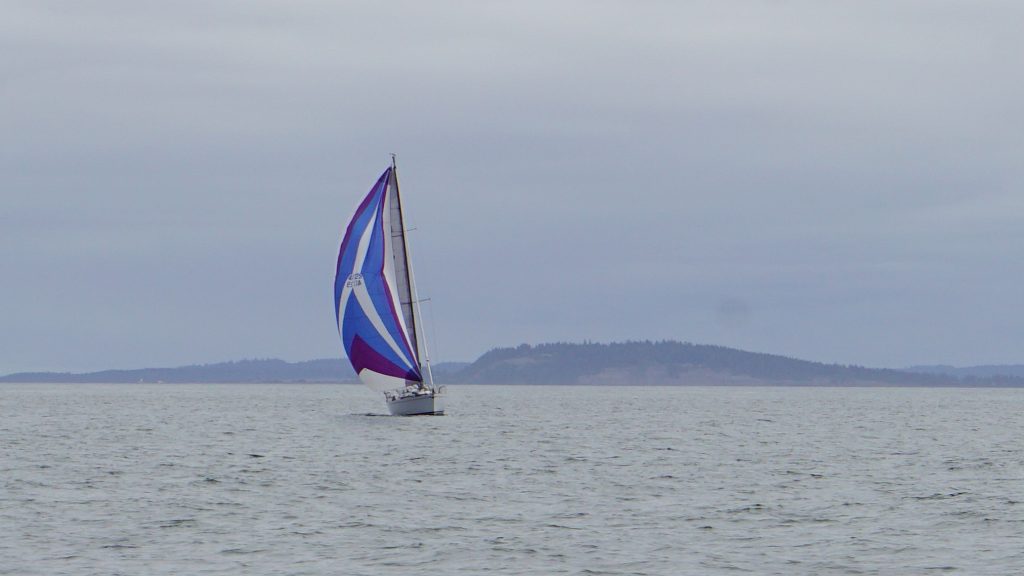 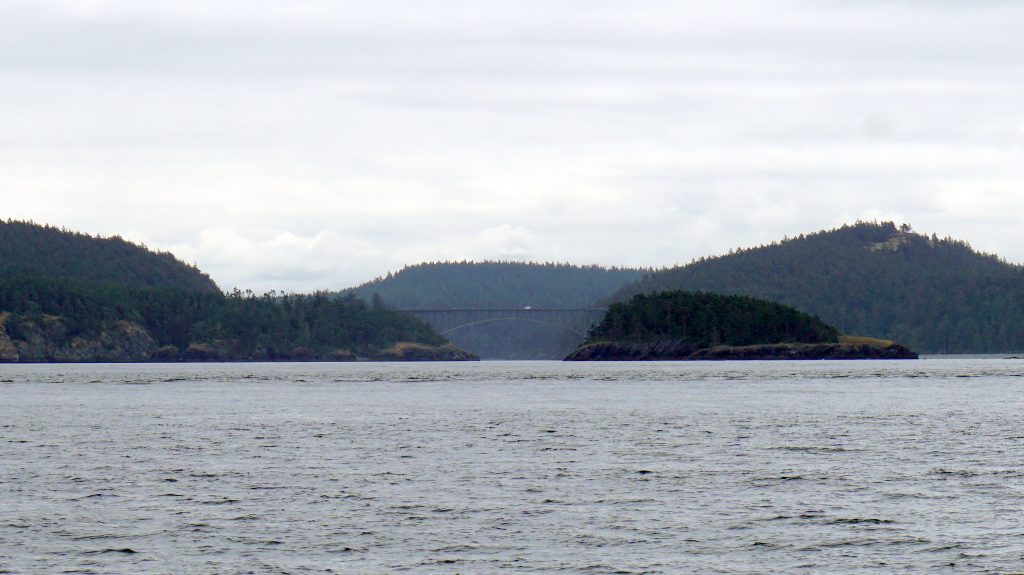