Not a single seagull about

We decided to get out of the marina for a few days. Mostly to get rid of the stationary-itch that has been plaguing us the past few weeks, but also just to get further away from civilization for a spell. We knew we were returning within a week, so the journey was not far – just a return trip to Lummi Island’s Inati Bay was the plan. There we could isolate in nature yet keep within two hours of our home port. This would be our first time sailing the boat since our return after the winter. A gentle shake-down sail was in order anyway.

The weather did provide a gentle breeze on our way out although the wind was coming directly from the direction we wanted to travel, as usual. We sailed close-hauled at a mild speed. Surely not the most exciting sail, but it was good to get the canvas up and feel the water slipping under us again. After two hours, we still had half way to go and we were not moving very fast toward our destination, so we fired up the motor. Within no time we were waiving an ‘ahoy’ to the boat already anchored in the tiny bay, and dropped our anchor far enough away to be polite. Our position in the bay placed the small waterfall on land right outside our cockpit. The sound of the falls combined with the birds surrounding us relieved us of all our stresses within mere minutes. Kerri kept mentioning how much she needed some nature and didn’t even know it. Myself, I knew it. The one thing we truly appreciated was the lack of seagulls this far away from the mainland. Those squawking rats-that-fly never shut up back at the marina, so peace and quite is hard to find there. Instead we got the sounds of the random bald eagle or two. It’ll do I guess. 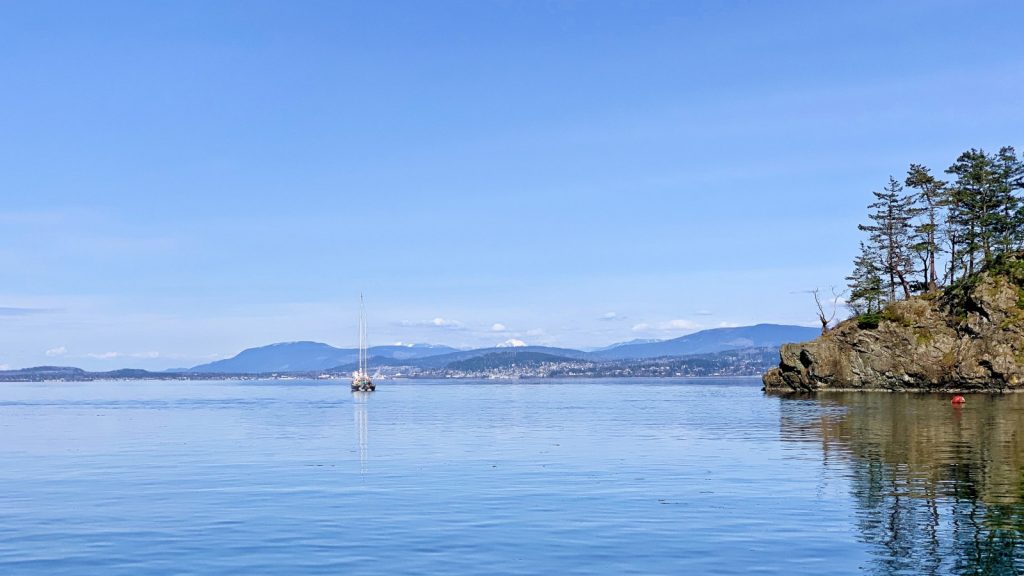 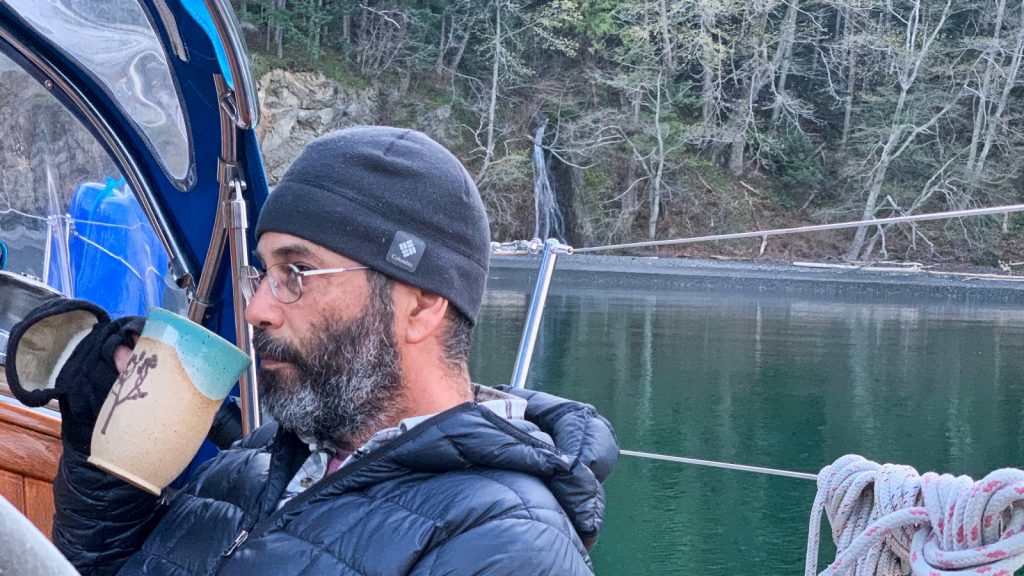 We stayed for five nights in the bay and never left the boat. Each afternoon a few boats would arrive and anchor, then leave in the morning. Rinse and repeat each day. Friday night enough boats came in to anchor that we felt the need to drop our stern anchor to prevent possible collisions in the middle of the night. Weary of the last time we stern anchored here we did so anyway, and went to bed for what would be our final night in the bay.

In the morning the winds – which hadn’t been forecast at all – showed up in force and from the one direction that blew right into this little bay. The bow anchor line was stretched well out and we were only a few dozen feet from being pushed ashore. All was holding well, but the waves coming into the bay were causing the worst bucking up and down that we have experienced to date. We chose to abandon the bay and get back to the marina. The only problem was that the wind was coming directly from that direction, again. This time at 30+ knots though, which meant we had 8-10 foot waves crashing over the bow, spraying us time and time again. Our old motor could not power against that wind at anymore more than 1.5 knots an hour. At that speed it would take five hours to get home, even though it was right there in front of us!

We motored for a while without much progress. I eventually talked Kerri into raising the main sail with two reefs in (each reef point equals a smaller sail) so we could pickup some speed at the cost of having to turn 45 degrees away from our target. We would have further to go, but we were now moving faster. Plus, with the wind applying some force to our sail, it bucked a lot less. This continued for another hour and a half until the winds were staying mostly below 30 knots (but still gusting to it occasionally). Not wanting to pass up on an opportunity to expand our experience level we eventually chose to pull out a partial head-sail. This doubled our speed digits and we were able to turn the motor off all together, which always makes life better, and quieter. 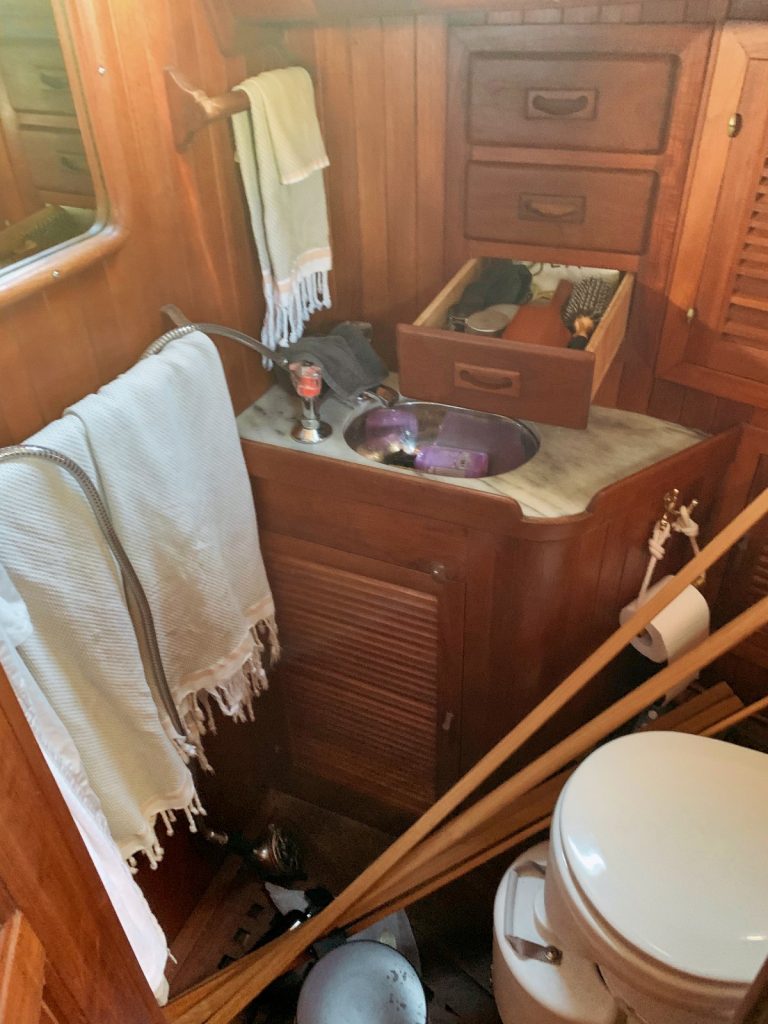 We sailed our asses off for the next two hours. Meriwether was heeled over hard as the winds tried repeatedly to kill us, but failed. We came out on top of the weather this day, busting through the poorest weather we have ever sailed. After four hours of sailing, we pulled into our slip without incident. It was scary. It was exciting. The boat was covered in salt. We were covered in salt. But we did it. The only casualties of the sail was a bit of a mess in the head and our bananas, which took a pounding. We learned a lot pushing our envelope this day and I’m pleased we did not chicken out by taking the motor all the way in. We have a long list of things we could have done better, which means we will… next time we are sailing with 30 knots of wind. 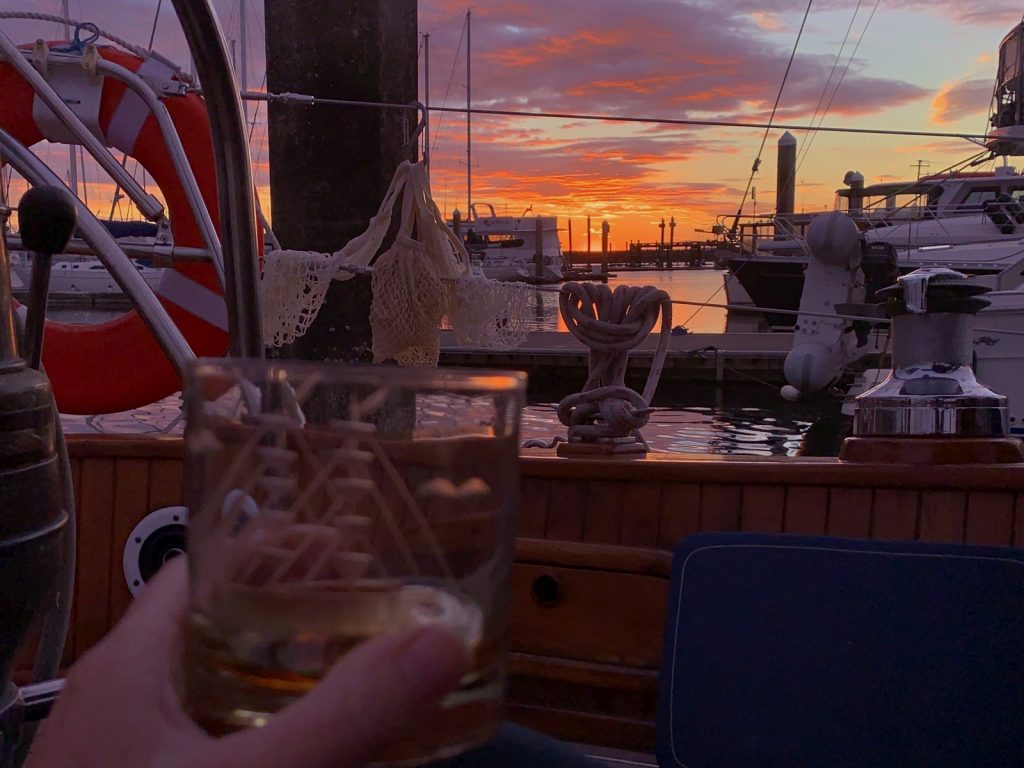