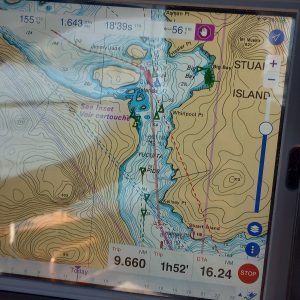 We didn’t know it at the time we signed on to this new route, but we soon found out that it brought us through the a trifecta of rapids, the first of which we had already passaged. Ahead lie two more – Dent Rapids and Yuculta Rapids – both of which came with dire warnings about timing our arrival at slack tide, which we were sure to do. Even so, being within a mile of these rapids puts you some quite frisky waters with the flow pushing Meriwether’s full keel all over the place at times. This is the time the autopilot gets a break, while I hand steer.

Once clear of the rapids we were able to pull out the jib and coast towards our destination on Cortes Island; Von Donop Inlet. Von Donop turned out to be a nice little gem. Though there was a line of other boats anchored, it didn’t feel overly crowded. The water – and ambient temperature – was warm enough for a dip and the evenings were perfect for happy hours. We stayed for a couple days soaking in the sun and just taking some time to enjoy ourselves. 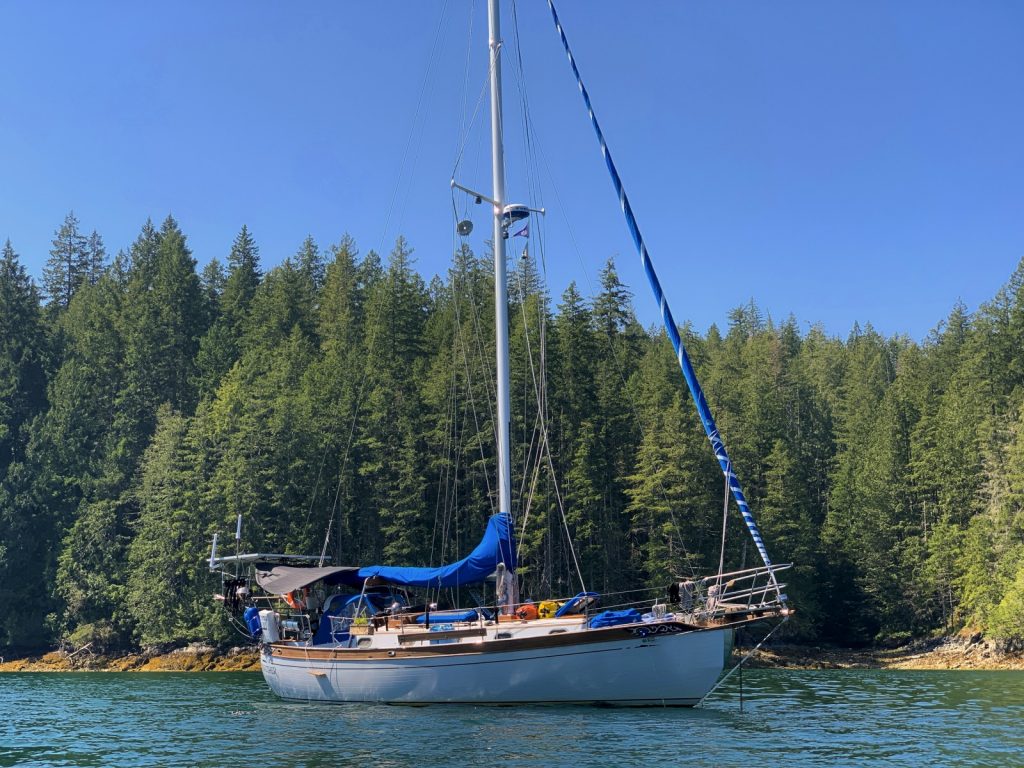 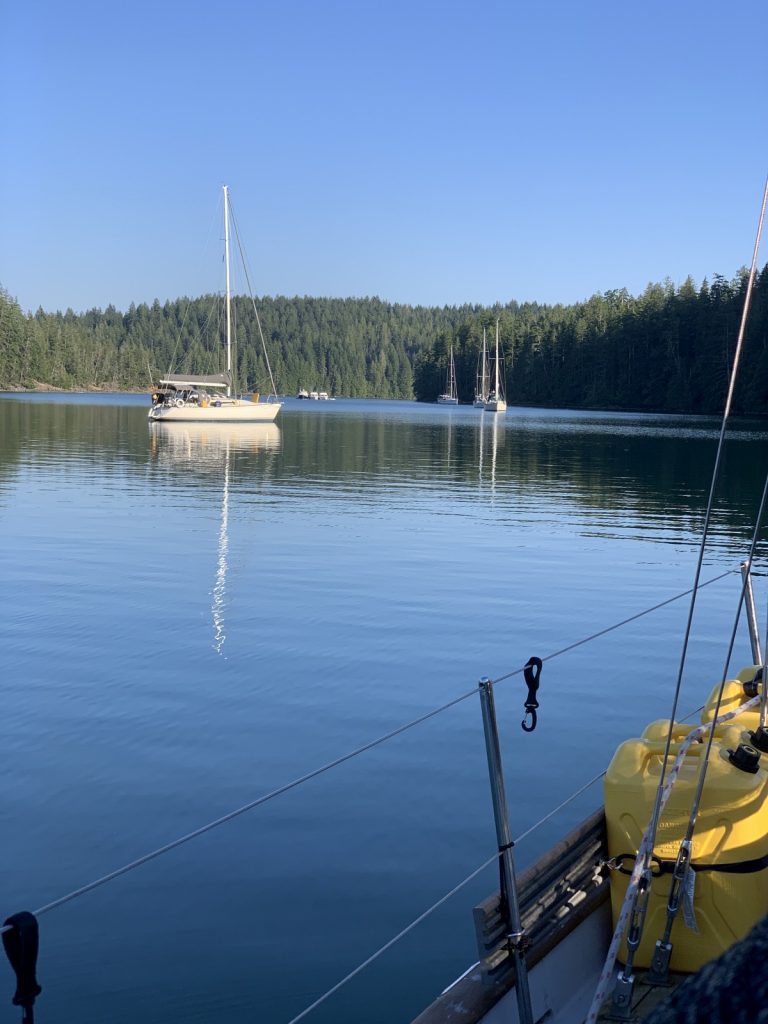 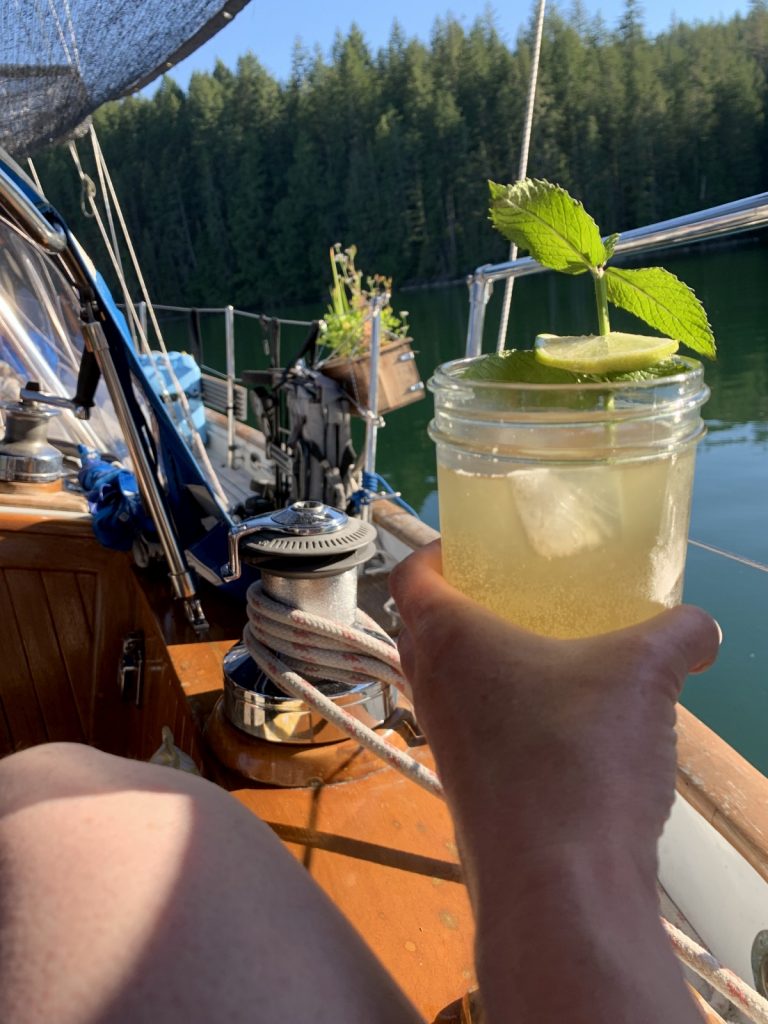 Fully rested, we chose to inch our way a little further South on Cortes Island. Around the other side of Cortes is Gorge Harbor. Protected from the weather from all directions, the only way in was through “the gorge” – a slot through a high cliff into the inner bay. Unfortunately, once inside the bay proved too crowded and lost cell signal, which we needed at the time. 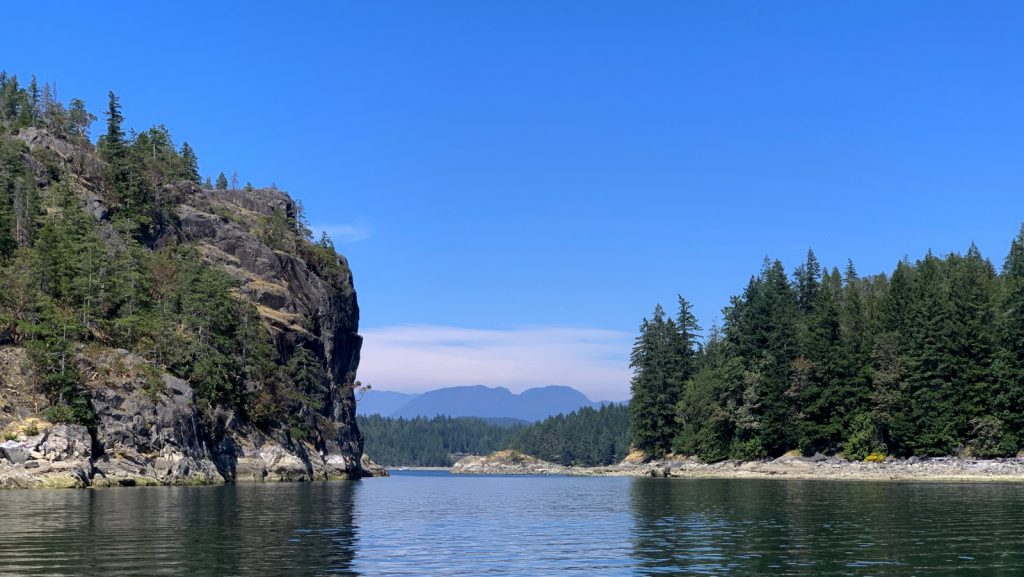 We turned about, passed through the Gorge again, and motored to the next anchorage on the list; Manson’s Landing. This turned out to be a mistake. The anchorage at Manson’s was deep. It was also just as crowded. And to make matters worse, the anchorage was sprinkled with mooring balls. The combination is not great. We needed long scope of anchor chain to be safe, but other boats were doing the same and finding room was not easy. Then, just make matters worse, we knew a few of the boats that were on moorings would not swing with the currents or wind. They would stay stationary, effectively blocking a huge patch of the anchorage from us who would swing at anchor. It was not a happy time, and a bit of frustration was present, but we finally dropped the anchor and got a night of sleep. 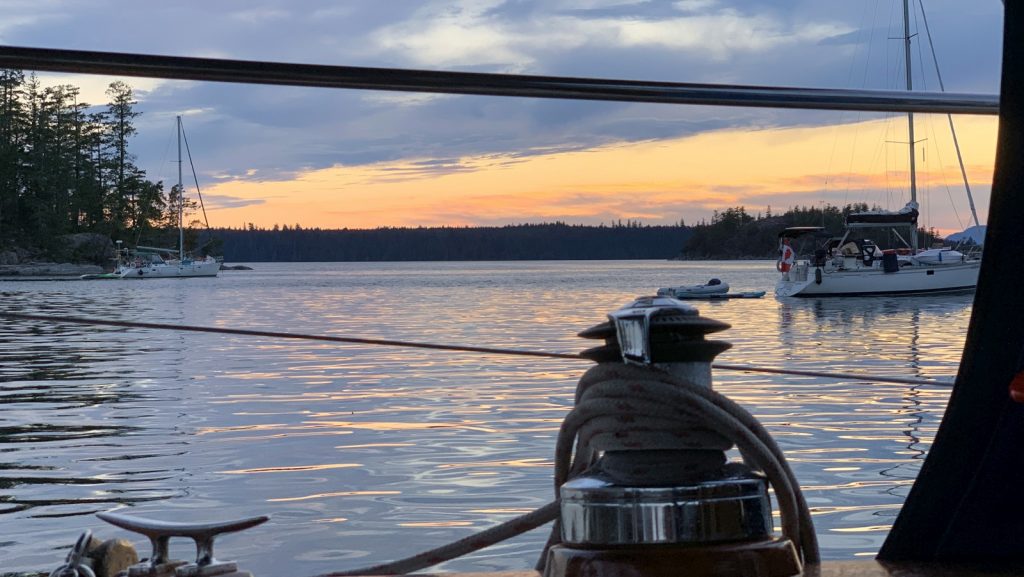 It wasn’t until the following morning that the ‘thud’ informed us that we were not in a good spot – we were crashing into one of those moored boats. At least it wasn’t at 3am! Still, by the time we had stepped up on deck we had separated from the other boat, but the damage to ego had already been done. We hauled up our anchor and repositioned. Even though we could see that no damage was done, a short dinghy ride over to the moored boat to leave a note felt like the right thing to do.

Safe, we headed out for a hike to the local grocery to replenish some supplies. Advised by another boater, we took the trail as opposed to the roadway. The trail lead past a lagoon that dries at low tide, and up to a fresh water lake that had bath-temperature water. We did not bring our suits, but it would have been an amazing bath, for sure. With a couple groceries in hand, and a popsicle in tummy, we returned to Meriwether to find it within a boat’s length of yet another boat on a mooring – Ugh! Done with this place, we picked up and left. 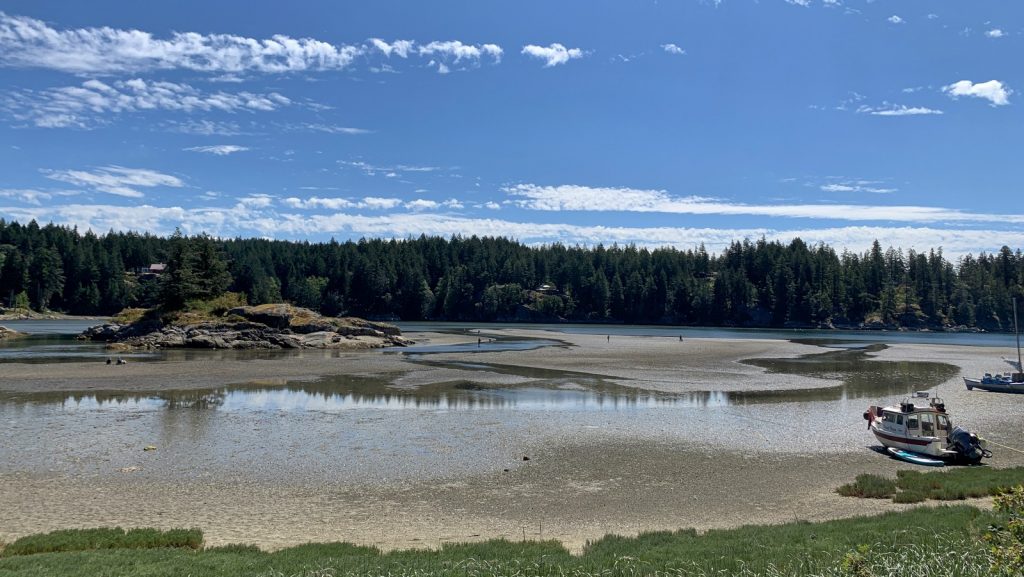 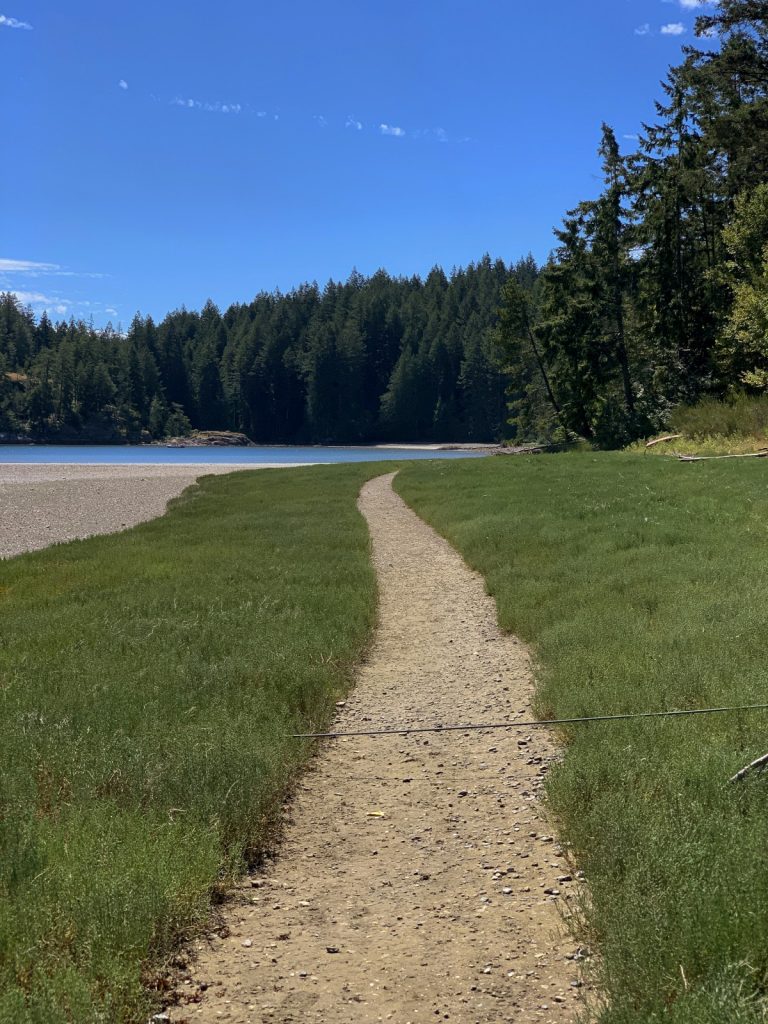 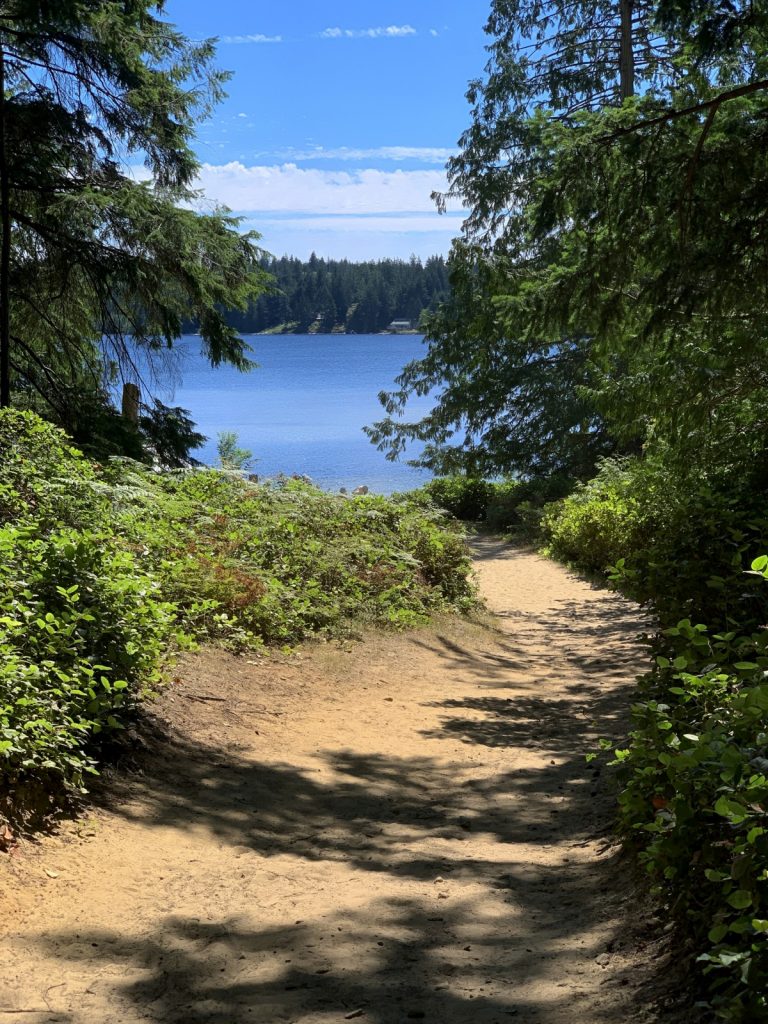 Barely 5 minutes after stowing our anchor the motor was turned off and the sails raised. Life always feels better at sail and we were going to sail a bit. Little did we know it at that moment, but we were going to get to sail the rest of our day… all the way into Desolation Sound proper. And somehow not a single picture was taken. The sail brought us past the southern tip of Cortes Island where we turned to the north east to pass between Twin Islands and Hernando Island. From there is was across open waters, around Sarah Point, and into Malaspina Inlet where we tucked into one of the first anchorage we could find – just for a single night.

We moved on, towards one of the main attractions of Desolation Sound; Melanie Cove and Prideaux Haven. Little did we know just how awful it would feel for us. The crowds were stifling. Boats were anchored – stern tied to shore – every few feet. Some were rafting together six wide to be able to party more efficiently with their buddy-boats. After we finally found a spot for us to anchor, a flotilla of dinghies, all tied together so only one person had to drive, crawled past for a happy hour tour of he bay. After two seasons in Alaska, with it’s huge expanses of wild areas and near empty of any human life, this was a shock to our systems. 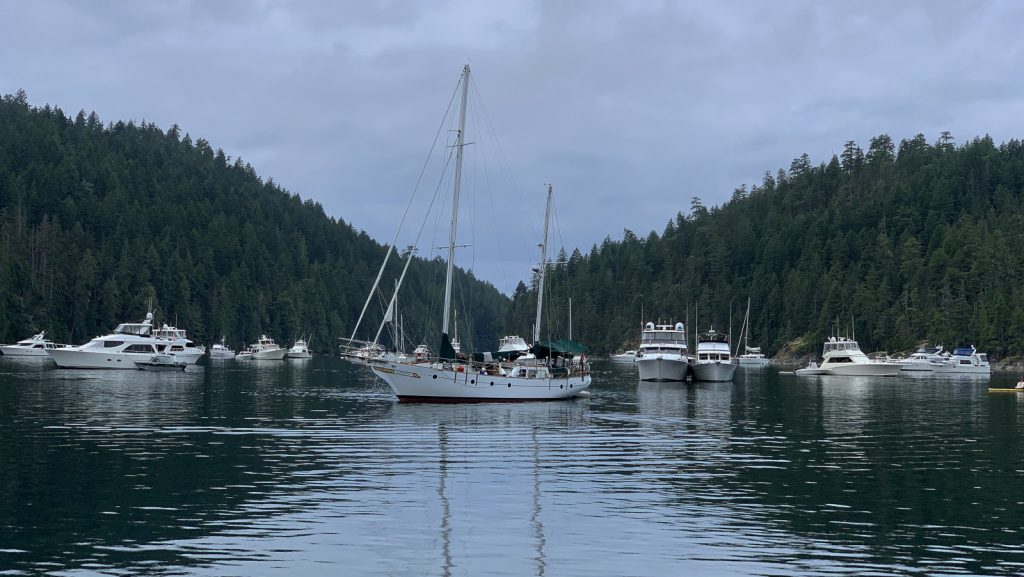 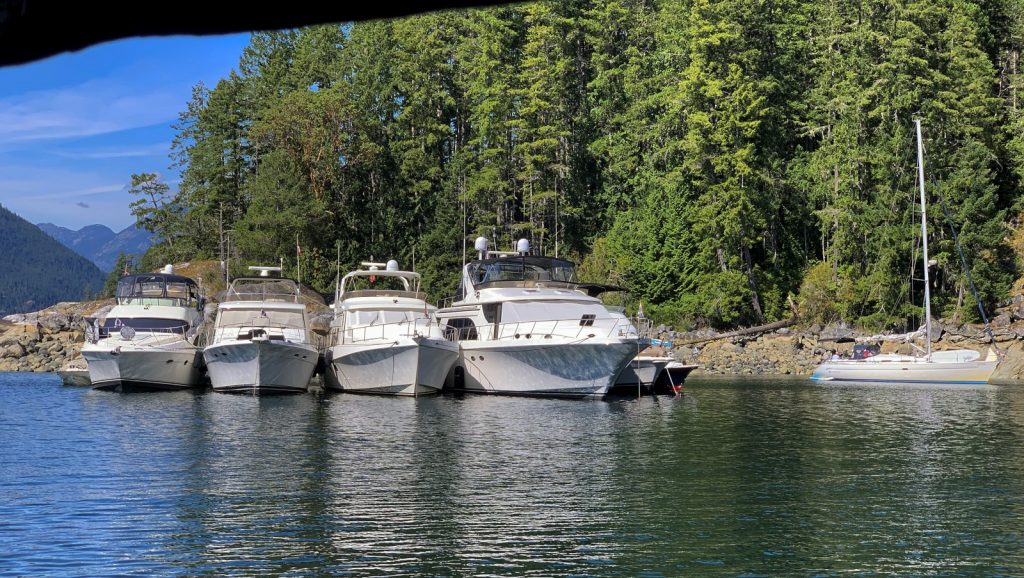 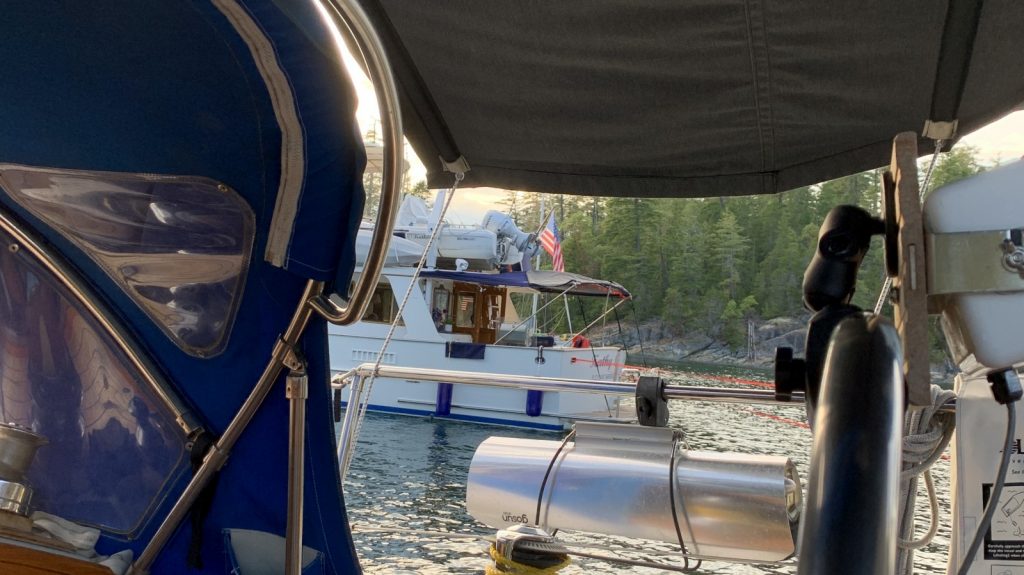 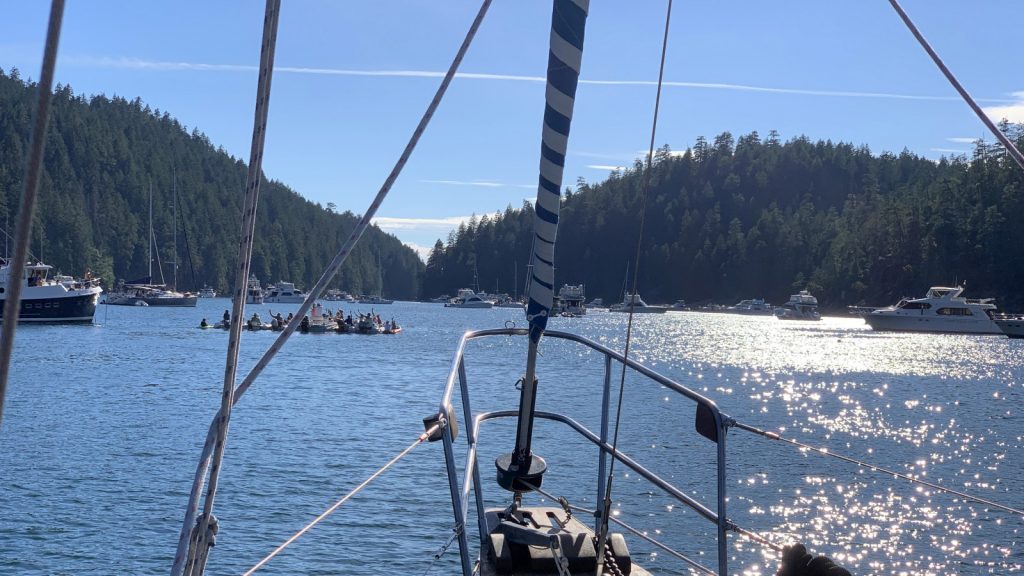 We left first thing in the morning to find a less party-mode bay. It didn’t require a long journey to get there either. Roscoe Bay was just across a small strait, but could only be entered at high tide, which it was in the morning. Inside the uber-protected little bay was a beautiful spot with a hiking trail out to a lake and some peace over the parties happening just a few short miles away. Although there were still numerous boats in this small bay, it didn’t feel anywhere near as crowded and the party scene was non-existent. A rainy day was a nice change, but we did get out for a bit of that hike. 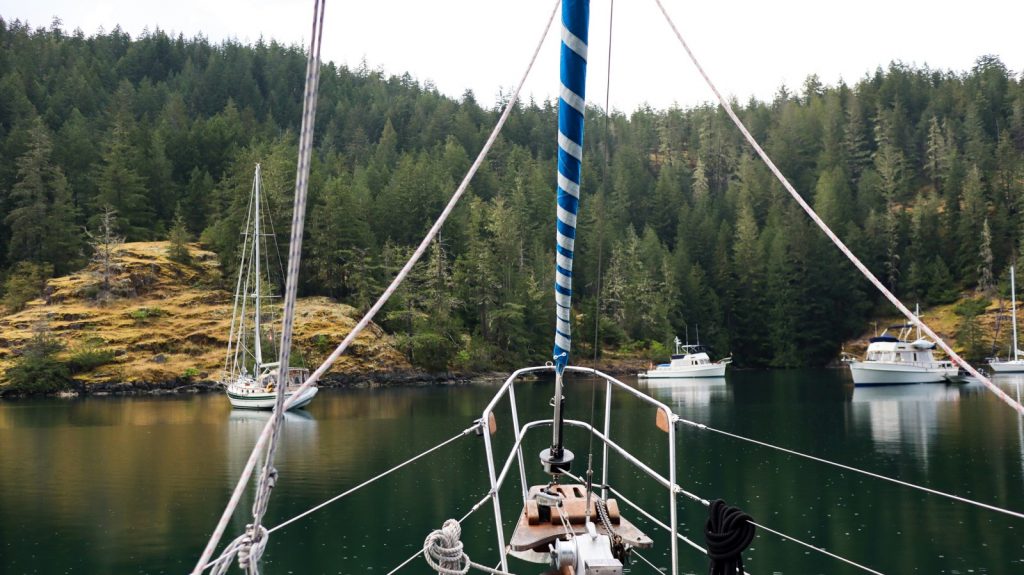 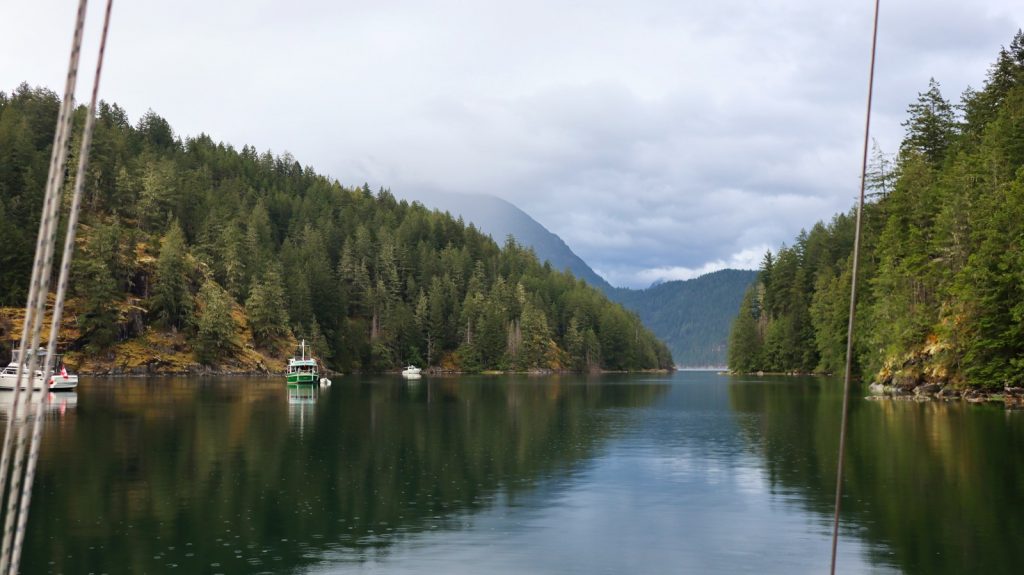 Roscoe Bay was right at the start of the way up to Pendrell Sound. Pendrell is famous for being the warmed Pacific-waters north of Mexico. The water is trapped here, with no current or river flow to move the water, it gets warmed by the sun over the course of the summer, reaching temperatures into the high 70’s. This proved not to be the case for our visit – of course – as the previous day of rain cooled the water a few degrees. it was still nice, but it was not living up to the hype that we had been told all year long. It had a crowd, once again, but not as bad as the worst of it. And apparently the scenery was nothing worthy of taking any photos.

We ended our visit to Desolation Sound by getting out as soon as we could after visiting the “sights”. We left feeling a bit underwhelmed. If we were to advise anyone wanting to come visit, we would be sure to mention to do so before going up to Alaska. BC, while beautiful, just does not compare. On our way out – south – we stopped in at Copeland Islands for some down time. Though still technically in Desolation Sound, there were not nearly as many boaters around on this far outskirt. We took a couple days to recoup and relax, tied to a rock and away from any other boat – though there were multiple anchored just around the corner. 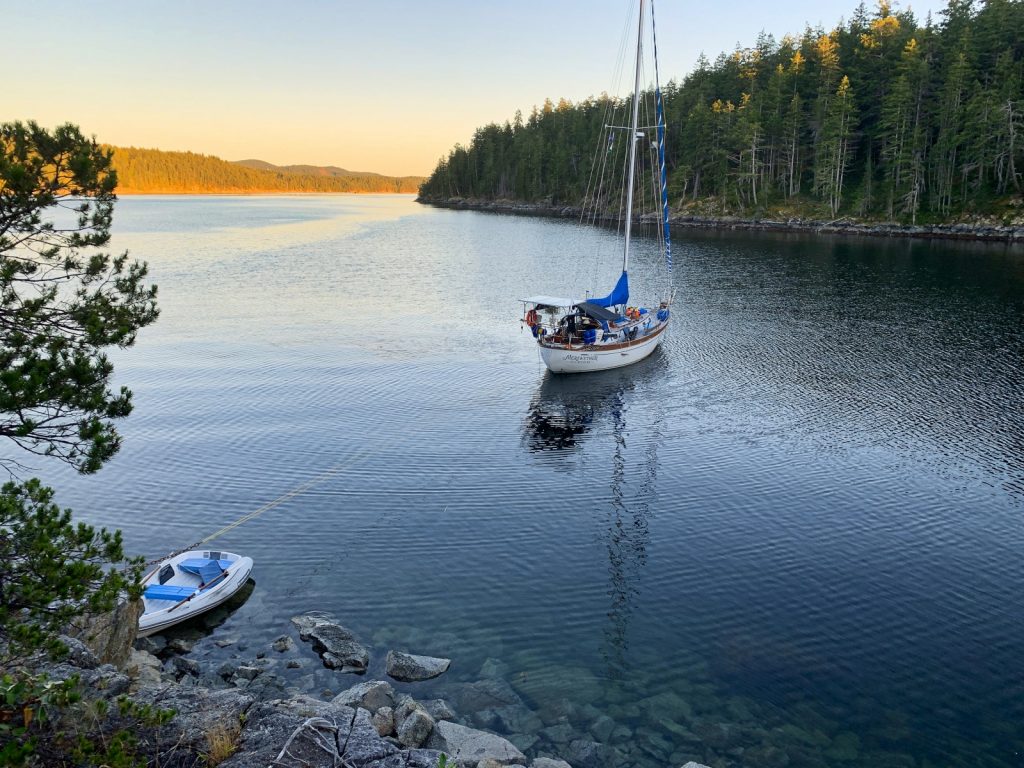 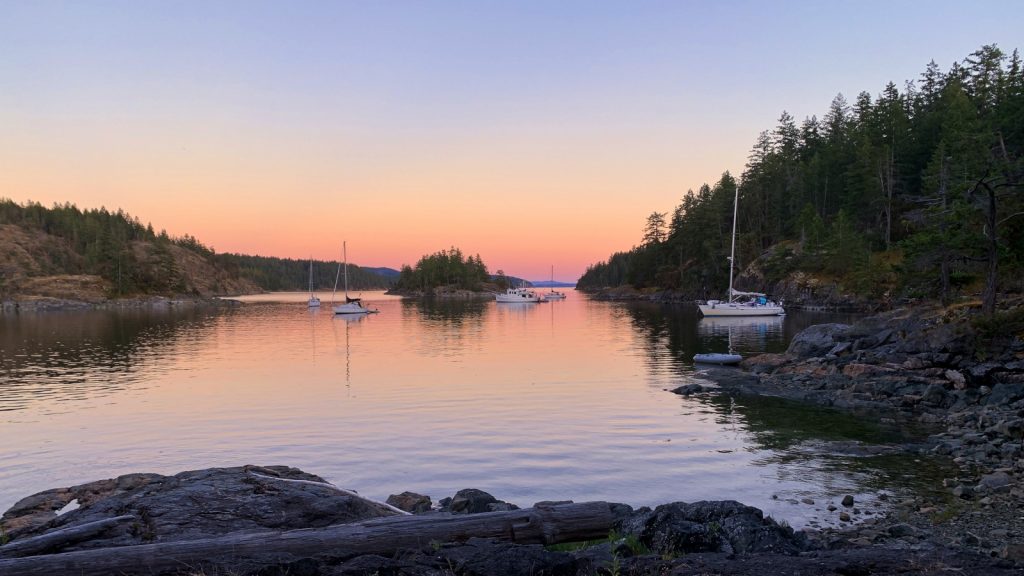 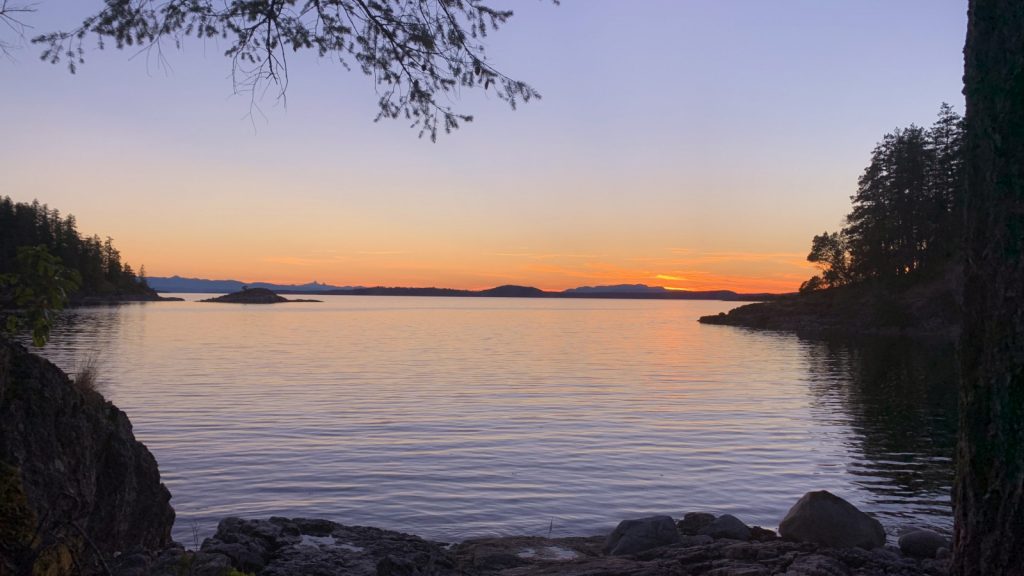 We had to make a decision coming back down south from Alaska — whether to take the outside coastal route of Vancouver Island, known for its rugged beauty and remoteness and favorite of hard-core cruisers, or the Inside Passage, famous for its must-see regions like The Broughtons, Desolation Sound and Princess Louisa Inlet. We had traveled up the Inside during COVID restrictions, and were permitted to through-transit only, “no dilly dallying or sightseeing”, and as we are continuing to head south on a timeline, this would be our last chance — one or the other. Like-minded boaters practically unanimously told us we’d prefer the outside route, not just for its beauty, but to avoid the crowds. But so many raves about the unlimited exploration in the Broughtons, the warm, swimmable waters (unheard of up here!) in Desolation Sound, the majesty of Princess Louis Inlet (which we haven’t gotten to yet), we felt like we’d regret not going. Though the main factor in our decision was the lack of areas with cell signal down the west coast. I’m in the middle of multiple website builds this summer, and I couldn’t figure a way to make it work without rushing from tower to tower. So we decided to embrace the crowds for once. Or so we thought.
The Broughtons were fine — a fair amount of boats, but so many places to go. If you don’t like an anchorage, there are another three choices 20 minutes away. The outskirts of Desolation Sound were fine, too, and I’m glad we it the during a heat wave. We got to enjoy those 70º+ waters without the stress of the what was to follow. But once we got to the main attractions of Desolation Sound, I found I was simply not prepared at all to embrace the circus. We’ve just gone too feral, I guess. It wasn’t just the crowds — it was the lack of courtesy, the snobbiness and cliquishness — the overall atmosphere. We’ve enjoyed socializing with all sorts of people on all sorts of boats, from those maintaining ones barely afloat to foreign super yacht owners. But in the places we typically meet them, every type is a like-minded adventurer and nature seeker. This is our first true experience trying to coexist with the “Spring Break” type crowd (though well over half were retirees, the mood still applies). I’m glad that part’s over. It was a Catch 22. We thought these were places we’d regret not seeing before we left the PNW. It turned out we would not have regretted skipping them. But we’d never know that unless we went, so if we skipped them, we still would have regretted it! (BTW, I bet Desolation Sound is just awesome in the shoulder seasons!)
Next up: Princess Louisa Inlet: crown jewel of BC’s Inside Passage. 40 miles of Majestic Fjord culminating in a spectacular waterfall. We’ll see if Alaska’s fjords already ruined us for all others… darn Hedonic Treadmill (thanks, Nina and Jeff).