The long approach to Caution

Leaving Bella Coola, after a three day rest, we were under no delusion – sailing would not be taking place this day. In fact, we were racing against the clock as the nearest anchorage was 6 hours down-channel, with strong winds that would oppose us by afternoon. Burke Channel is notorious for making life hard on sailors that are traversing out, so our plan to negate the risk was to leave at first-light; 5 AM.

It was not the most exciting of voyages; 29 miles of motoring over five and a half hours with not much happening but for passing by just two other boats. Lots of grand views, as fjords do, but for the most part Kerri worked down below while I kept us on course until we finally got to drop anchor at the only safe anchorage around – Cathedral Point – by noon. 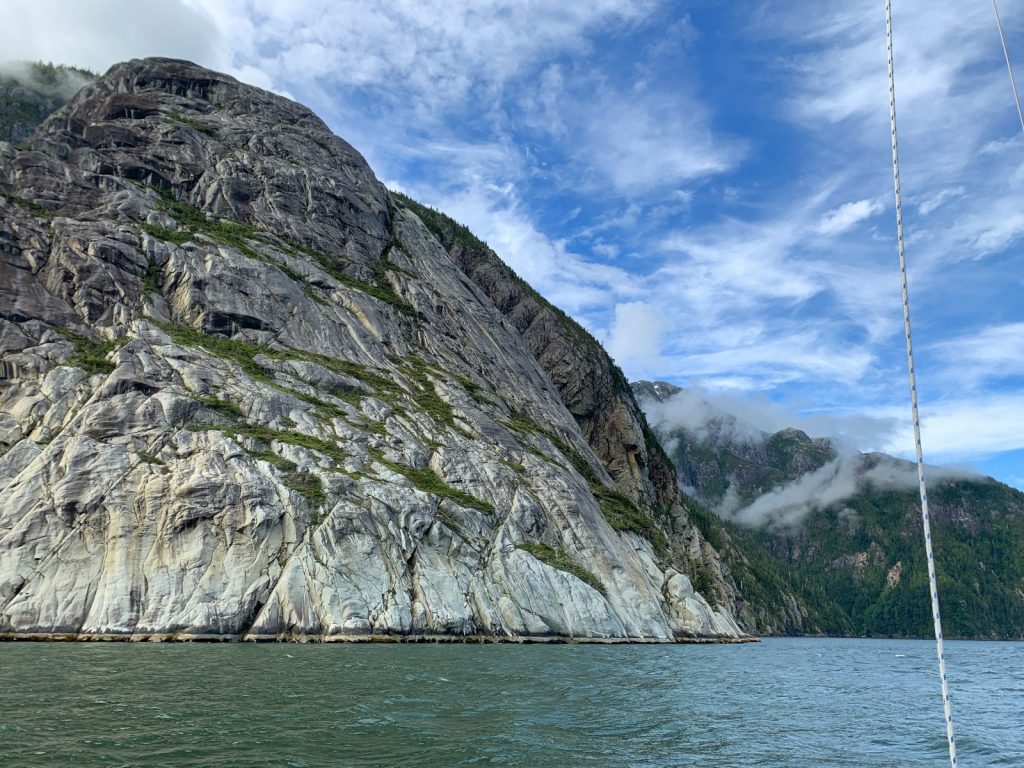 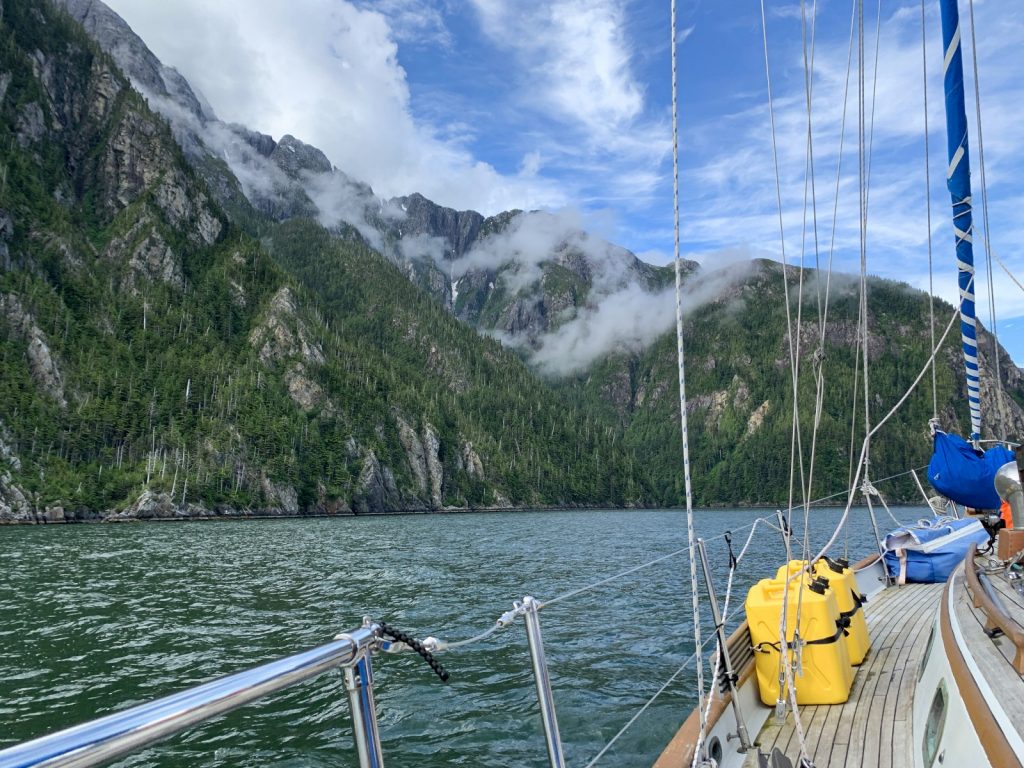 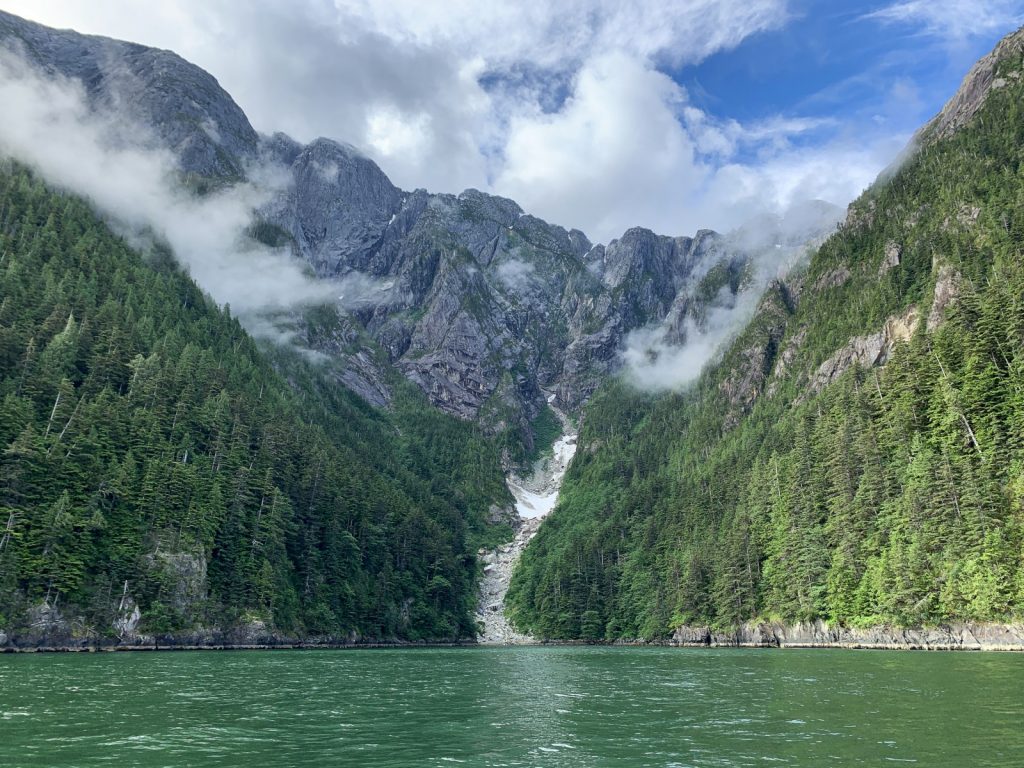 Lounging below deck soon after our arrival, we heard a most unique squeaking of a sound – coming through the water and hull of our boat. Though we were not sure what it was, we both felt it was dolphins nearby in the water. The sound being them talking to each other. Poking our heads up we found a pod of dolphins feeding not far from us, in our anchorage. Quite and enjoyable spectacle after such a boring day on the water. 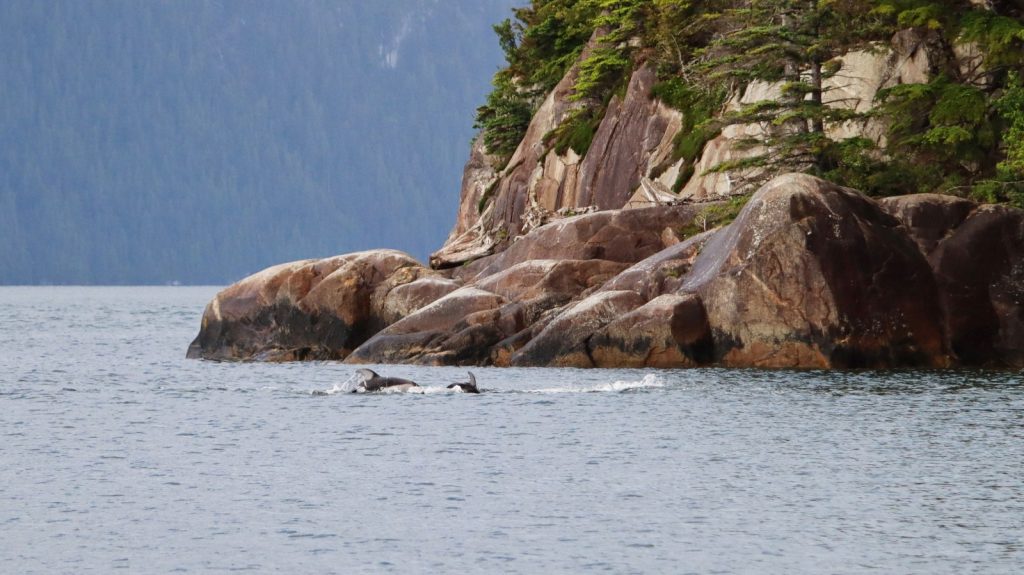 The following morning we were on the move again. This time sleeping in to an hour after first-light before getting started. It was another long-mileage day, the second of four schedule to get ourselves in position for the next geographical/nautical hurdle. We would sail this day. A single hour’s worth out of the nine hours we were moving. We chose to skip our first, and second, chosen anchorages as the weather was nice and we still had the energy to make it a super-long day and cut a day off the four. 48 miles total in the end, but it would give us a rest-day.

The first anchorage we decided to pass on was the old town of Namu. Long since abandoned, purchased, and re-abandoned, not much is left fully standing anymore. The guide books mentioned the toxins and debris that have leached into the nearby waters – another reason we chose to move on. Still, it made for some interesting photos. Hours later, we would be arriving to our non-scheduled anchorage just in time for the afternoon breeze to make it perfect sailing if only we had any more energy to keep going. With anchor firmly planted, the rest of the day was spent regretting not being out there sailing towards out overall destination. 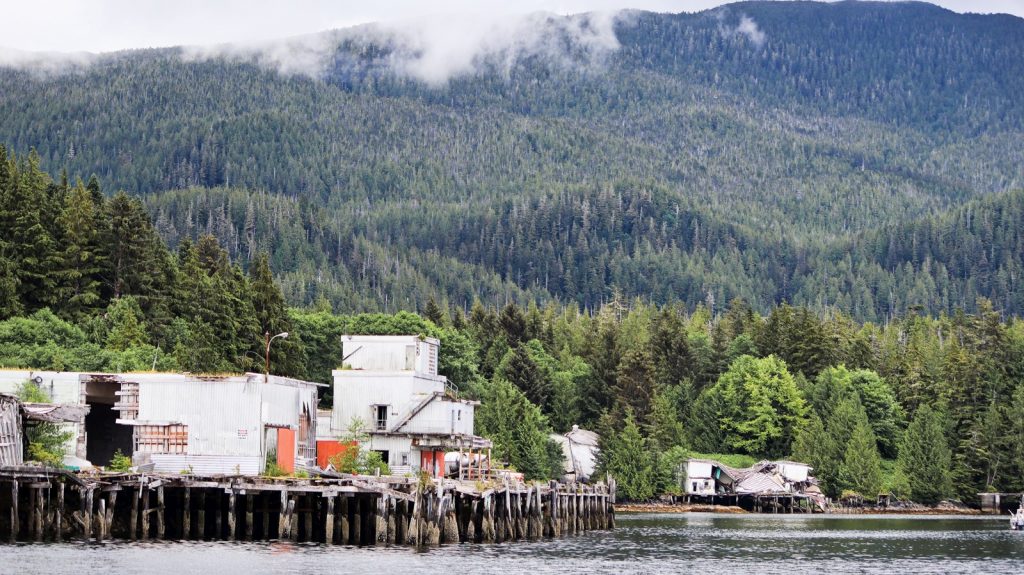 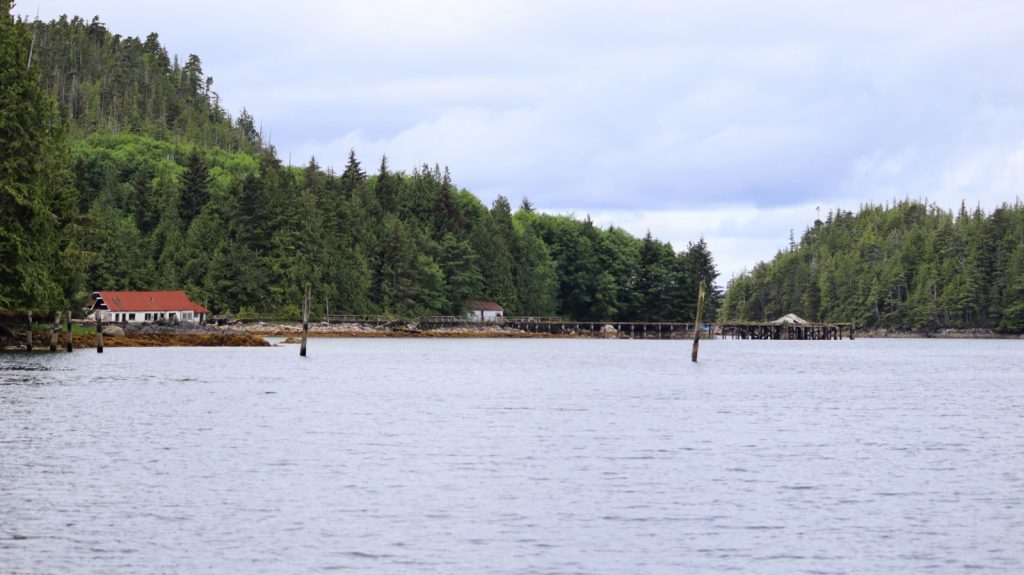 Morning came, and the urge to sail was to strong. No matter what, we would sail this day. The wind forecast agreed that it would be possible, though not all that brisk. We would be sailing into the wind, so tacking was in our day. At least our destination was only 26 miles away as the crow , and with an early morning start, we could take our time out there.

And time it took – just under 10 hours on the waters this day, but more than seven of them at sail! Even though the wind was pretty mild we were able to maintain a 3 – 4 knot speed at most times. Meriwether does pretty darn well upwind a gentle breeze with all three sails up, so we kept it going as long as we could; sailing down and out of Fitz Hugh Sound, out into Queen Charlotte Straight, and started our want into Smith Sound before being forced to crank up the ol’ Perkins to finish off the day at Fly Basin. Here we were only a few short miles from rounding the notorious Cape Caution which would put us in familiar territory and the last few hundred miles of Canada this boat will ever see. 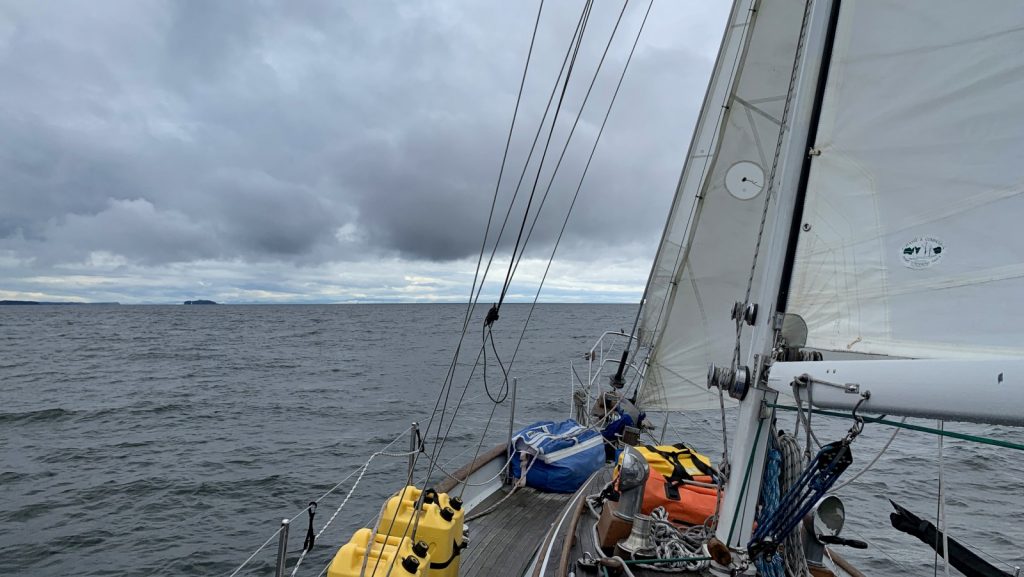 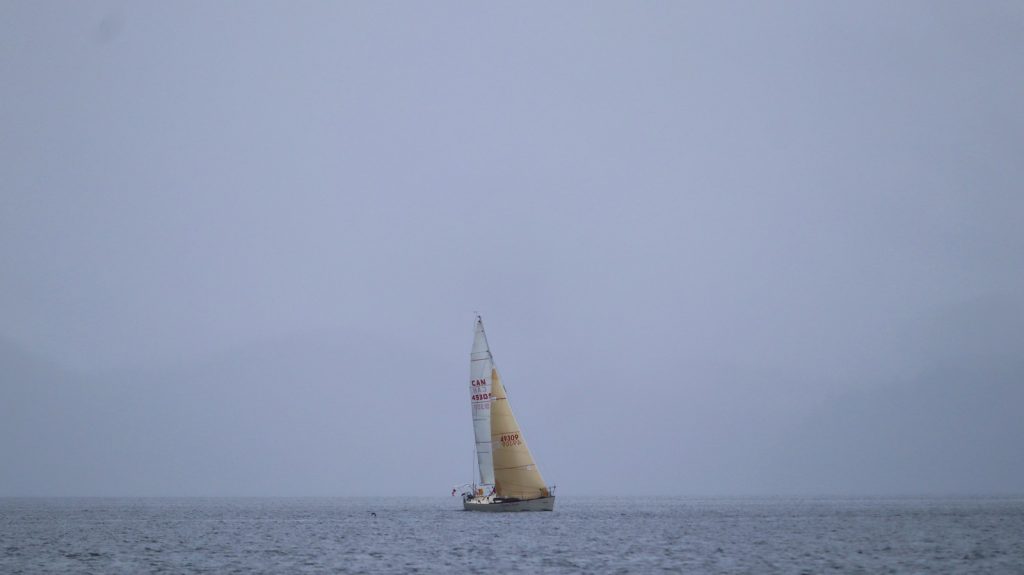 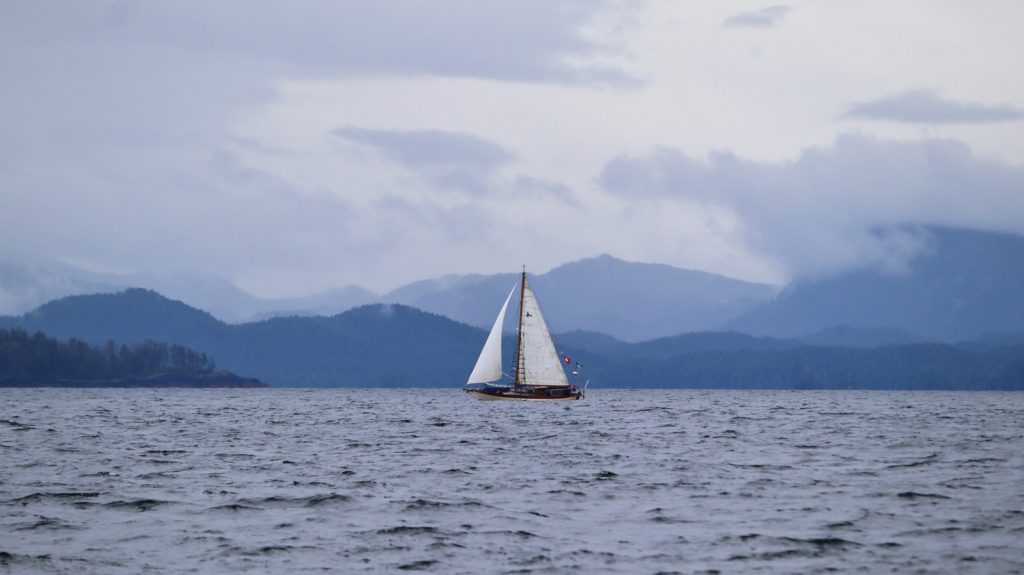 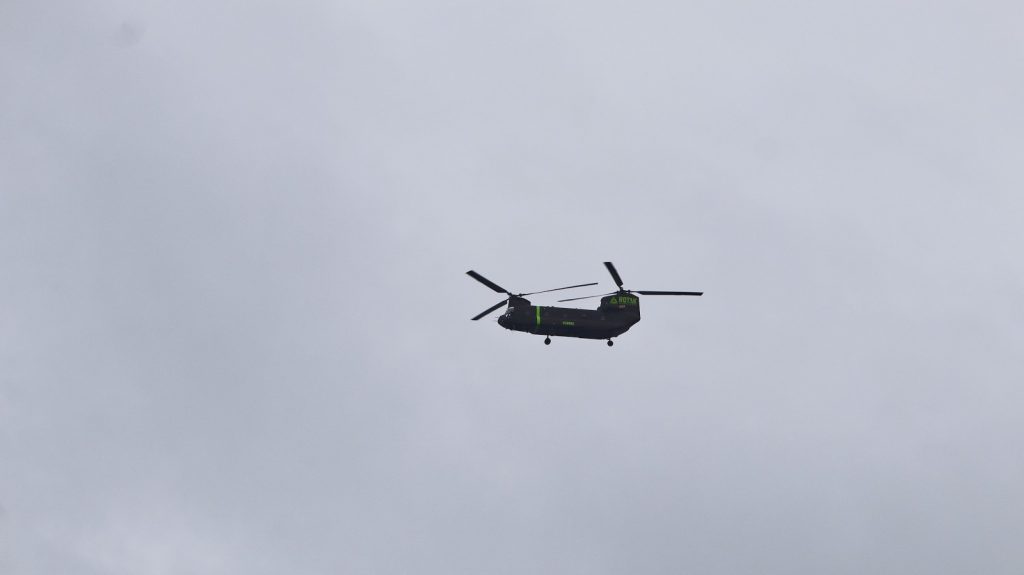