It’s just one of those weeks

Since Kerri took the time to type up long social media posts about our last week (or so), I leave it to her words… – Tim

They say in boating, you experience the highest highs and lowest lows. The past few days have highlighted both of those. After we left Glacier Bay, we anchored for a couple nights in a mediocre anchorage as far as protection, but one of the few places with decent cell service. We needed to move no later than Thursday, as big winds would start rolling in that night. We’ve been having (what we thought were) cold starting issues with the engine for a while, but have always managed to get it going. Not this time. 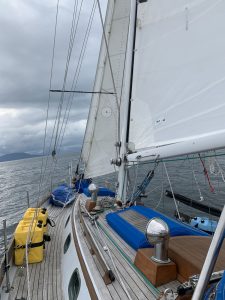 One battery drained, Tim took the dinghy a mile away and a cab ride to buy a new one. That one came to the boat DOA. We radioed a small fishing boat moored nearby to ask for a jump, and they came and spent over an hour with us recharging both our batteries on their generator. Still no go.

It became clear that our starter was fried. So at that point, Tim made a phone call to the CG, just to get a sense of what towing options we have just in case we need them. There are no official towing outfits in the region, no actual Coast Guard assets in the region either. There’s a guy who tows out of Hoonah (where we needed to get to), but we’re 30+ nautical miles away, and that tow would be over $1k from here. No problem, right? We’re on a sailboat. We can sail to the marina and just get towed to the slip. But there was no wind aside from the occasional 5 knot gust at our anchorage, though forecasts were predicted it to pick up to good speeds (on our nose) in an hour or two. So we weighed anchor and let the current push us out to the main channel, and started sailing for an hour or two with a decent 5-12 knots on our beam. Great. Then the wind died. 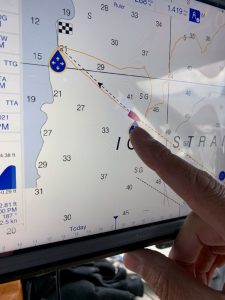 And for hours, we were carried backward by the two knot current, away from our destination and toward the Pacific. After 2NM in the wrong direction, we got in touch with the CG via phone and they put out a vessel assist (any nearby boat) VHF call for us, which got no response. Finally, we saw a fishing troller motoring back to Hoonah, and the really nice captain of FV Ariel agreed to give us a tow. Neither of us had ever towed or been towed before, but we worked it out…

…and, with our storm drogue and bridle as a tow line, Arial towed us into the night, back to Hoonah. Once inside the bay, the one professional tow boat in the region side tied and towed us into the same slip we left the prior week. All good and safe, but a long and tiring day.Hoonah is great tiny town with wonderful people. We knew that already from our last visit here, but people went far out of our way for us that day. It was an exhausting day, but didn’t feel that stressful. The stressful part for us is the other ramifications of not making it to Juneau by this week; the unromantic mundane stuff about terrible internet, work deadlines, etc. That’s the stuff that’s weighing heavy this week, especially yesterday. But, you can never expect things to go as planned on a boat. 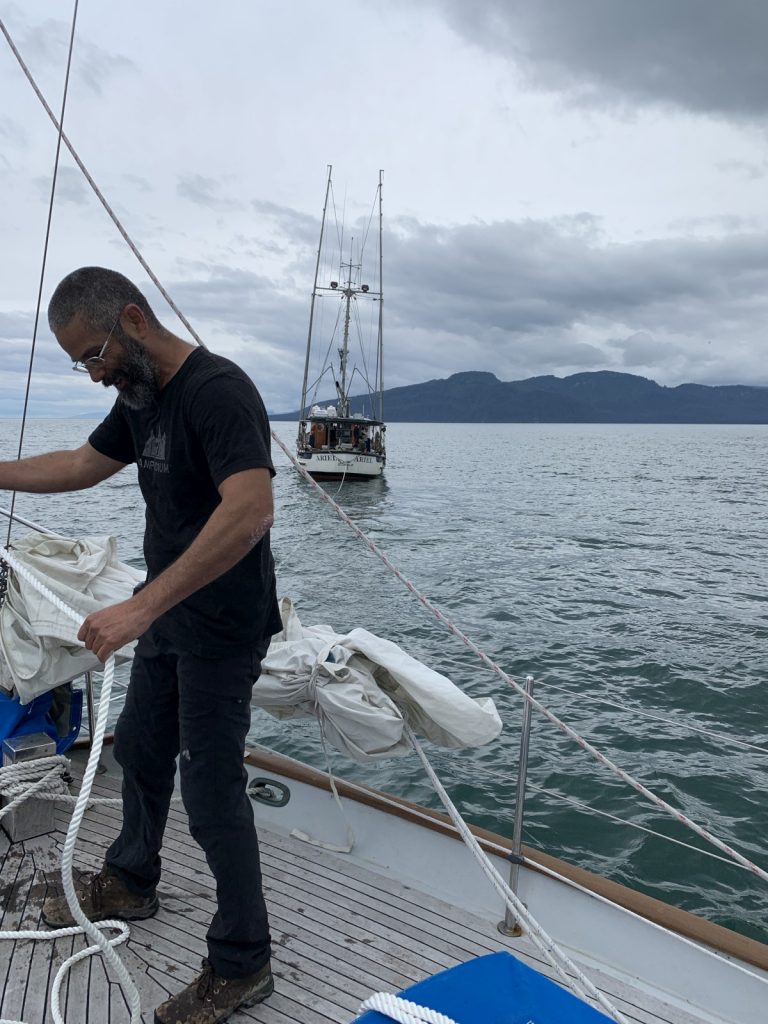 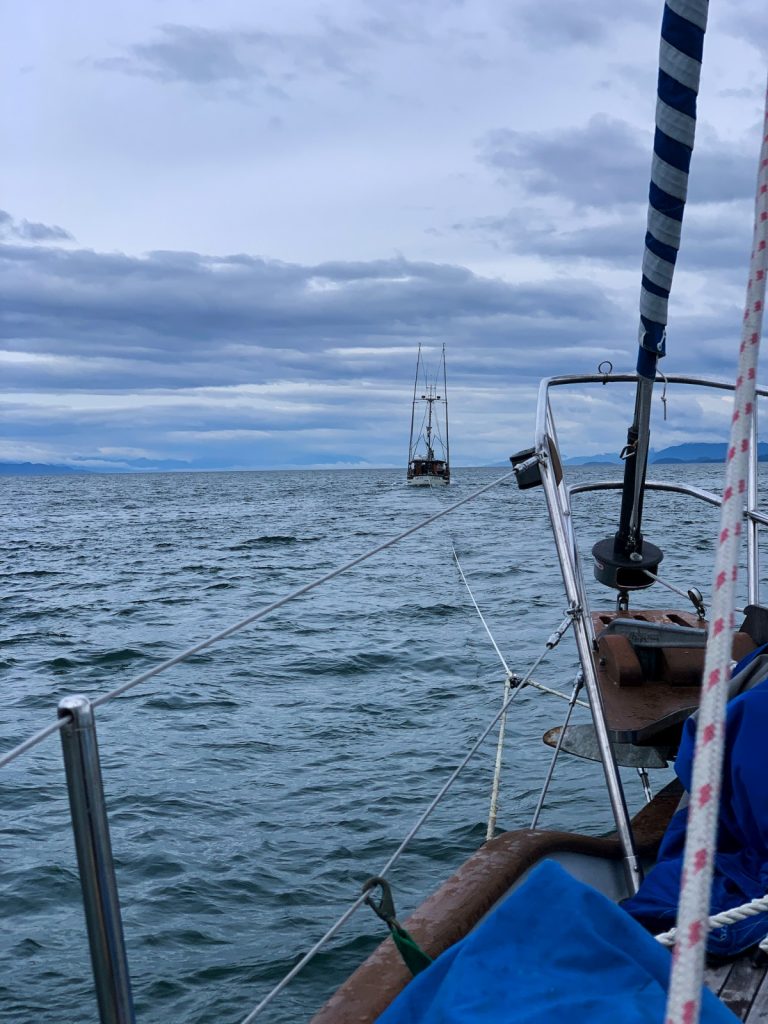 Well, it’s official. We’re staying in a Hoonah for the Fall and Winter season (at least most of it). Our starter situation still isn’t worked out, and the abysmal cell data situation here (the main stressor about being stuck here) forced the issue of getting a local wireless ISP connection set up ASAP. I had heard that the provider (Snowcloud) was backed up on new installs, but when I called, they promised a few days, and we had internet up and running just two days later! Fantastic customer service. 9Mbps up and 1 down isn’t anything to write home about, but it’s better than <0.5-to-nothing. 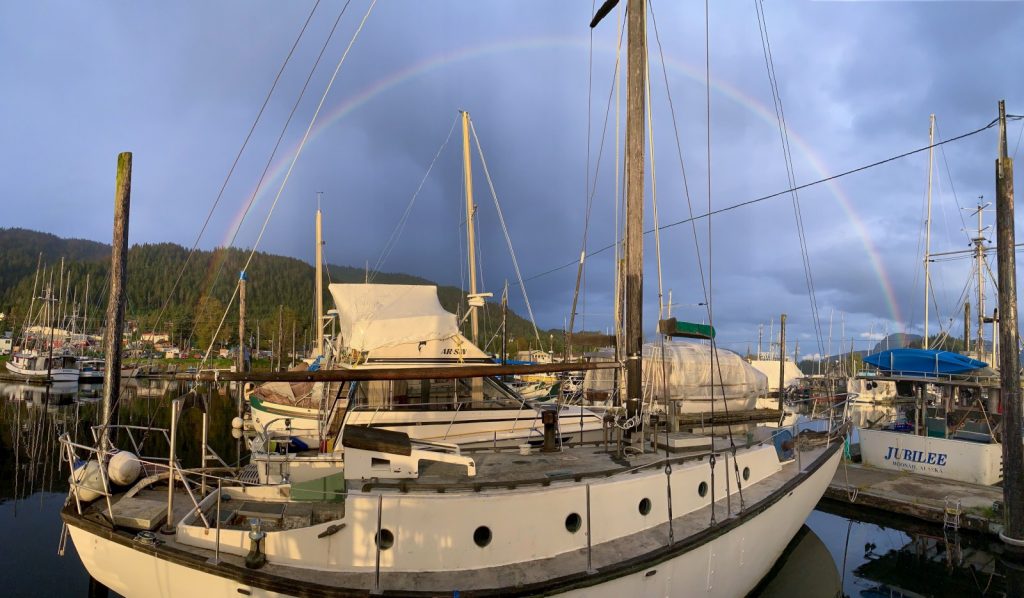 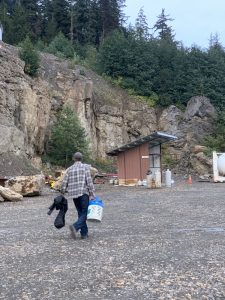 Before we even headed up to AK, we had several people tell us that Hoonah was the place to be for winter, so it was on the top of our list originally. But after visiting, the cell situation and the limited options at the grocery store were big deterrents. Juneau, with its restaurants, breweries, gyms, Instacart, and Lyft had better resources for a long winter. But then we got “stuck” here, and the more locals we met and talked to, the more the charms of tiny island life and the mysteries of how to get things done here started to open up. Internet: check. Groceries? Instacart from Juneau, and have them brought by AK Seaplane for 50¢/lb. Better yet, we’re already set up with a box of Full Circle Organics — sort of like a CSA, but more options and customization — dropped off at the little airport every other week. For propane, we walk up the road to the rock quarry, drop off a tank, and it gets refilled for pickup on Saturdays. The first time we came here, the gift shop owner’s son delivered us a cartful of their firewood for a small fee. We’re hoping to make that a regular event, but phone service has been out on the island for a couple of days, so that’s still up in the air.