After our backpacking adventure we both knew that returning to Ketchikan for me to jump on a flight was highly probable. And while neither of us wanted to return to Ketchikan, the next closest airport was many days away and we would have to skip all the adventures between. Time was somewhat important, but there was a few days leeway. Once we returned to a cell signal, and reviewed the ticket prices, it was clear that Ketchikan would be our target. 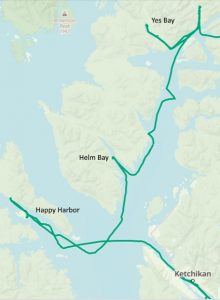 We left Bailey Bay and started heading South-West, passing Yes Bay once more. I was hopeful that we would get some sailing in during the day, but it just wasn’t to be. I only got the sails up for an hour, but we were beating against the wind and had a deadline (never a good combination) so for time’s sake we motored straight towards our next overnight anchorage while Kerri worked down below. Just two hours out Kerri took over to give me a break just as the wind, and waves, kicked up. It would have been some adventurous sailing but I declined to re-raise the main-sail, exhausted from this whole past week. Not too long before sunset we arrived in Helm Bay and tied to a public float to get some rest for the night.

The following day we spent another 7.5 hours on the move – mostly motoring again, but a few hours at sail helped. Kerri worked down below again until we neared our destination and the cell signal cut out. We were told about this place –  Happy Harbor – by the same local that told us about Bailey Bay. He informed us that it had great cell signal, so Kerri could finish off her work week here. Upon arrival the tide was too low to navigate the pass into the tiny harbor so we hung out for an hour waiting for a couple more feet of water to fill in. We had the place all to ourselves for the next two nights. It wasn’t as picturesque as the places we have been over the past week, but it definitely did the trick for winding down the whole adventure. 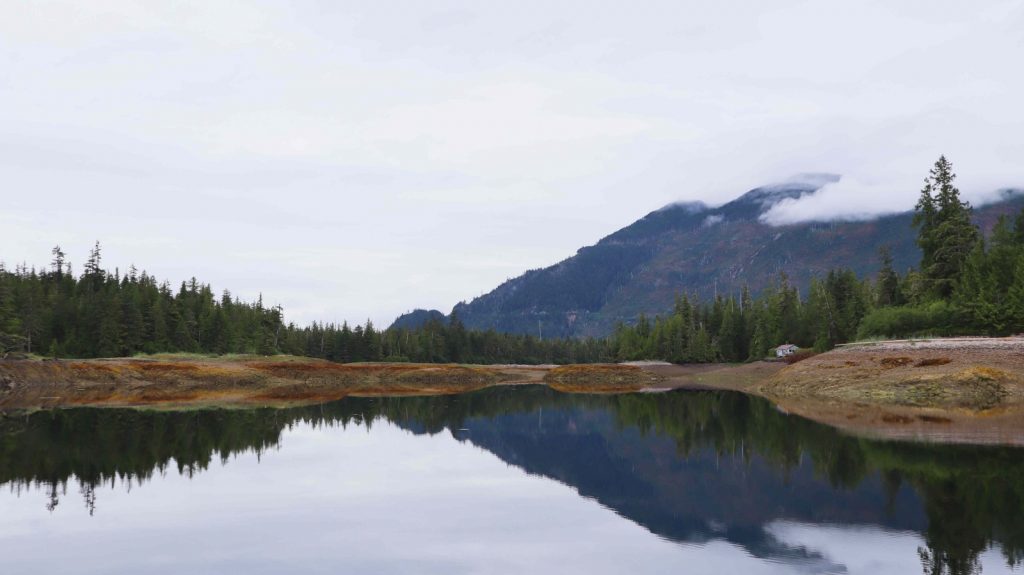 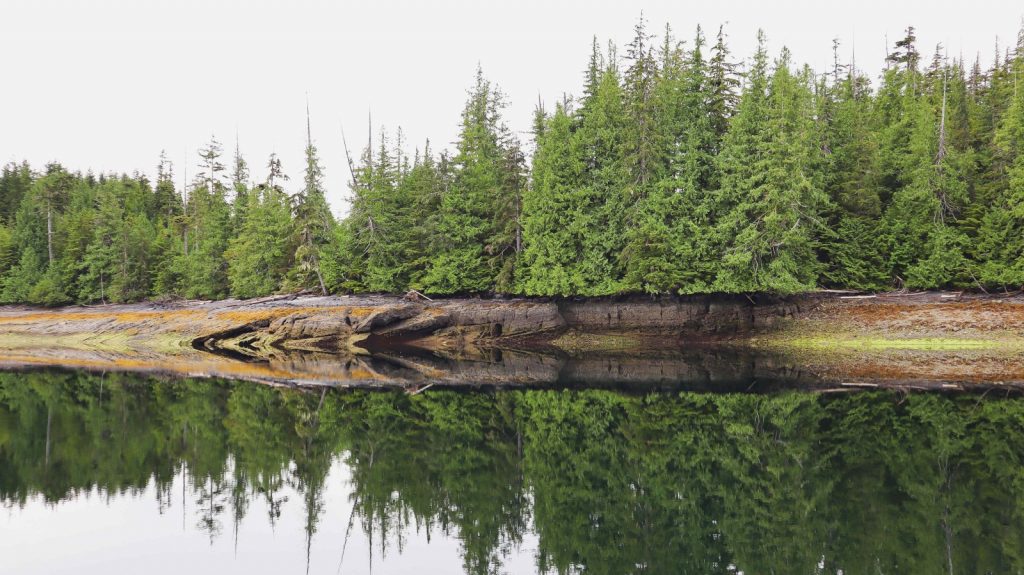 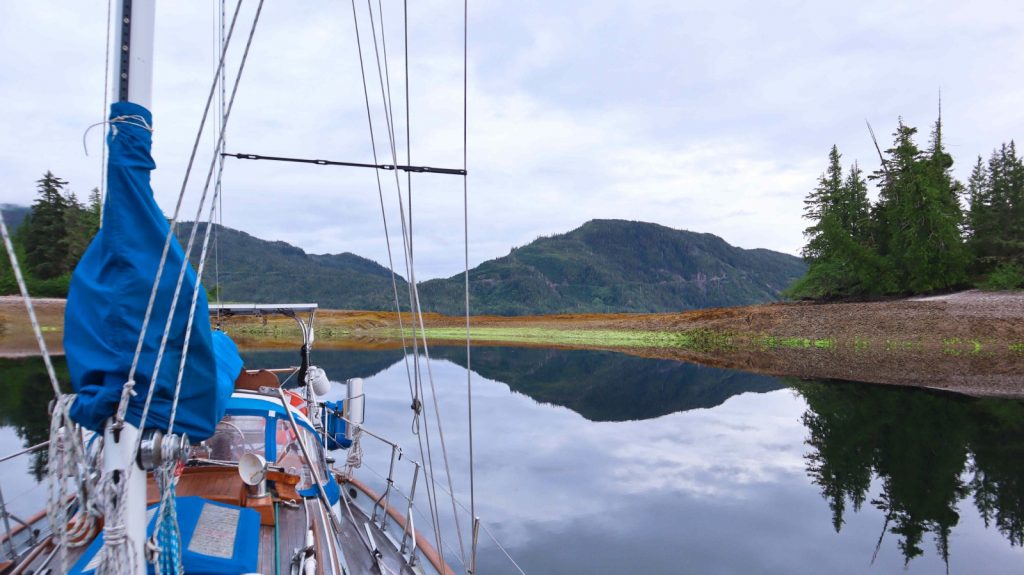 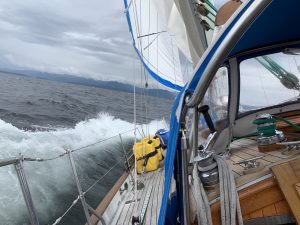 The day before my flight out of Ketchikan we started the 26 mile journey fully expecting to motor all day. The forecast showed pretty much no wind, but that was proven untrue almost immediately. Motoring straight into it (is there ever anything else?) I waited until we had a clear shot across Clarence Straight before pulling out the sails. Even though it was not the most comfortable sail (20+ knots of wind on our nose with just enough wave to make it feel worse) it felt good to get the sails out and fly for a change. With a single reef in the main and the head sail heavily furled we cruised through a fleet of fishing boats and across the straight. The slightly more than two hours we got to sail wasn’t even half the day, but it was worth it.

We arrived in Ketchikan to the first-come-first-serve marina just in time to get in the way of the first large cruise ship into Ketchikan in 18 months. It was just about to leave dock as we approached the marina, of which the entry was at the stern of the cruise ship. The Captain radioed to me and I did what I could to quickly get out of the way – not that Meriwether can ever be quick. Nevertheless, the Captain was extremely polite and patient as we motored past. I find out later that this very cruise ship is the federally mandated “test cruise” before the cruise lines can start cruising at full capacity again. It is coming soon, ugh. 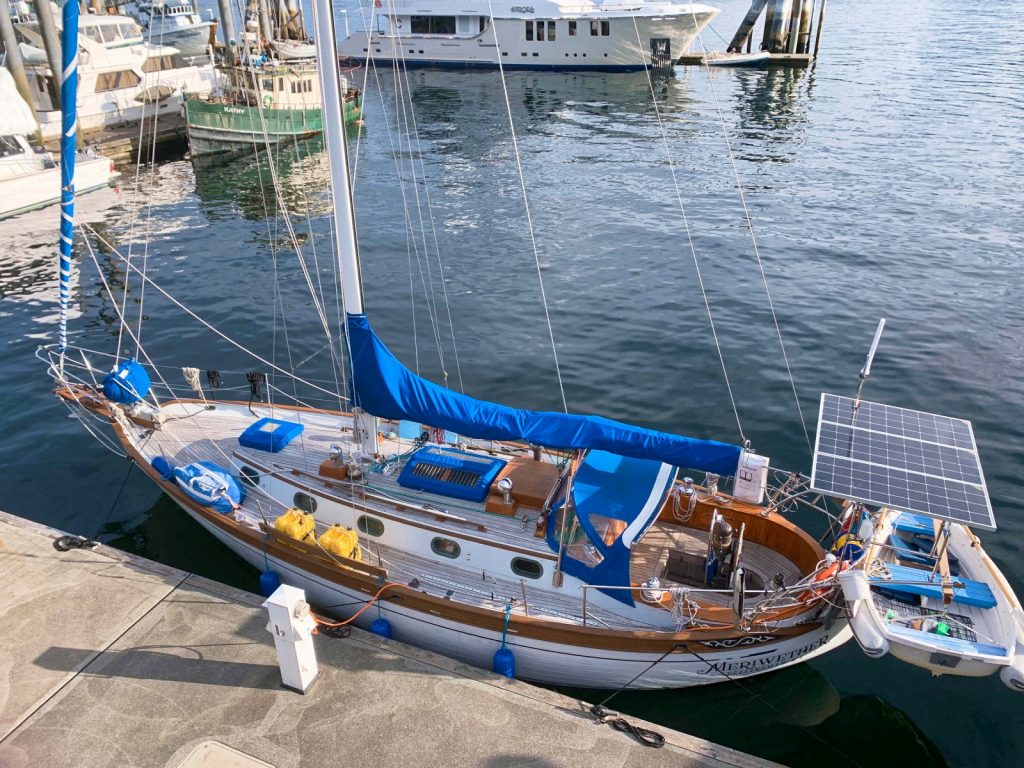 In the end we got tied to a dock, plugged in, and rested for a night, before I kissed my girl goodbye for a full eight days (we haven’t been apart this long since we met) before I took the bus to the airport to fly into Colorado to be with my son who had lost his mother to cancer a few days before. Of course this happened while I was out exploring Misty Fjords, out of cell coverage for five days, and days away from an airport. Her death was years in the making and not really much of a surprise. If anything, it is a relief that she is no longer suffering, but it ate me up that I couldn’t be there for him on the day it took place. He has a ton of friends that came to his aide, and I got to him a few days later. He is doing very well considering. Thank you in advance for your thoughts.