Before we came up to Alaska, Kerri and I both vigorously agreed that the backpacking gear would get some use this year. Sure, it has been since 2017 since we last used it, and we have carried all this gear around ever since, but this was all going to change damn it. As luck would have it, during our time stuck in Ketchikan we spoke to a local that told us about a particular bay – Bailey Bay – that has a single mooring ball and easy access to a trail that then lead out to a hot spring and lean-to for overnight camping. This was ticking all the boxes as our first overnight backpacking adventure in nearly five years and we both desperately wanted to pull it off. The only real problem was that it required us to get to the mooring ball before anyone else, literally on July 4th, and a small fishing boat was tied to that very ball we needed. Ugh! 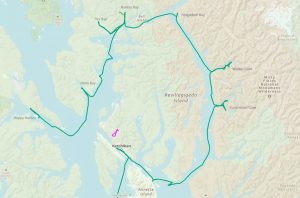 In a last ditch effort to salvage the weekend plan we motored up the very next cove (two hours away) to Yes Bay. Half way up the long bay is a resort, fuel dock, and even restaurant. The backup plan was to eat a good meal, refuel, and see if we can get that mooring ball the following morning. Unfortunately, the restaurant had no room for us that night and the fuel dock was no longer serving fuel, so we motored right on past and anchored at the end of Yes Bay in our own private piece of Alaskan paradise. There was no hiking to be had, but we took the dinghy out to explore the nearby shoreline and islands to keep ourselves entertained. We even set foot on ground for the first time in four days, which didn’t feel all that weird anymore. 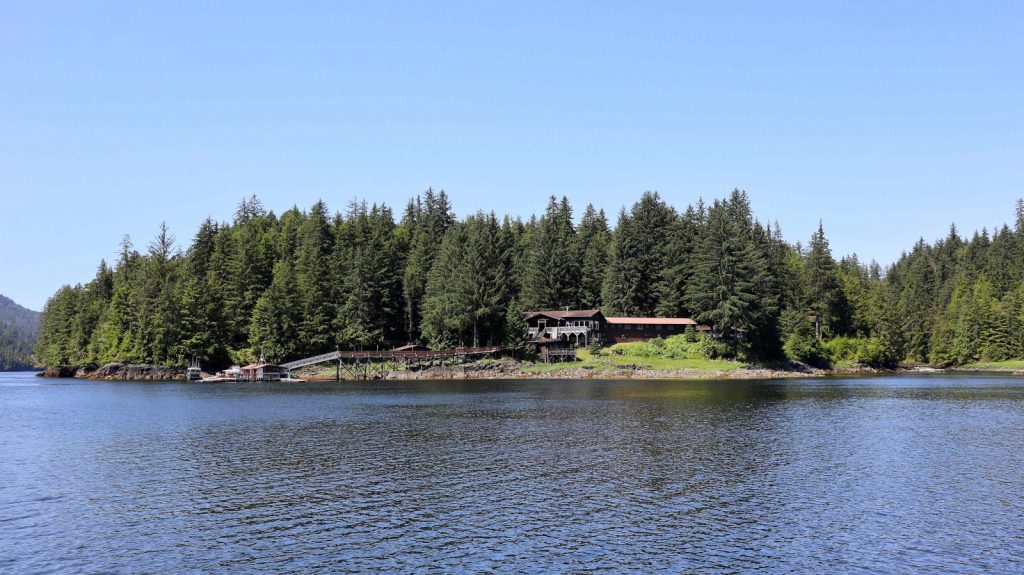 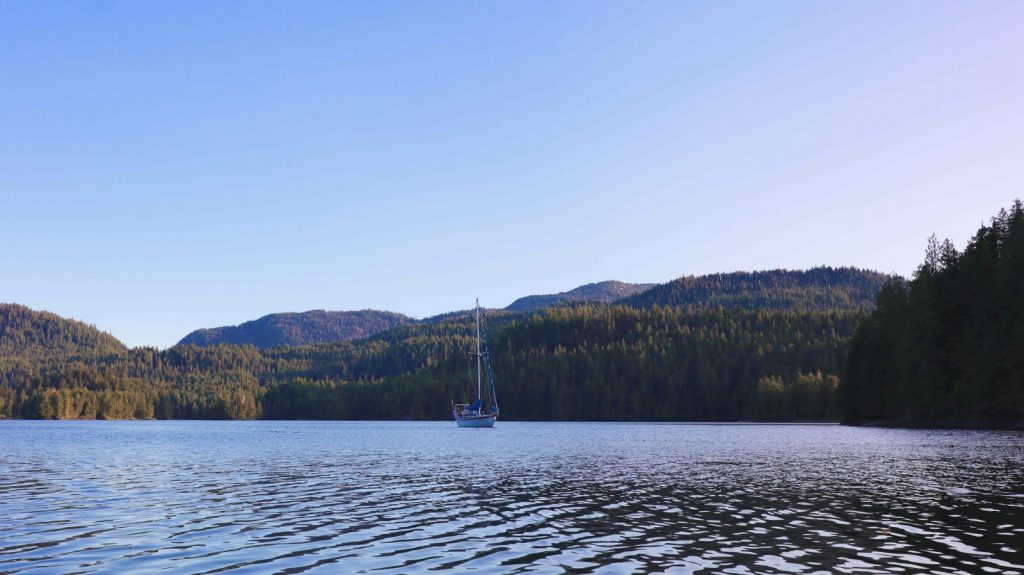 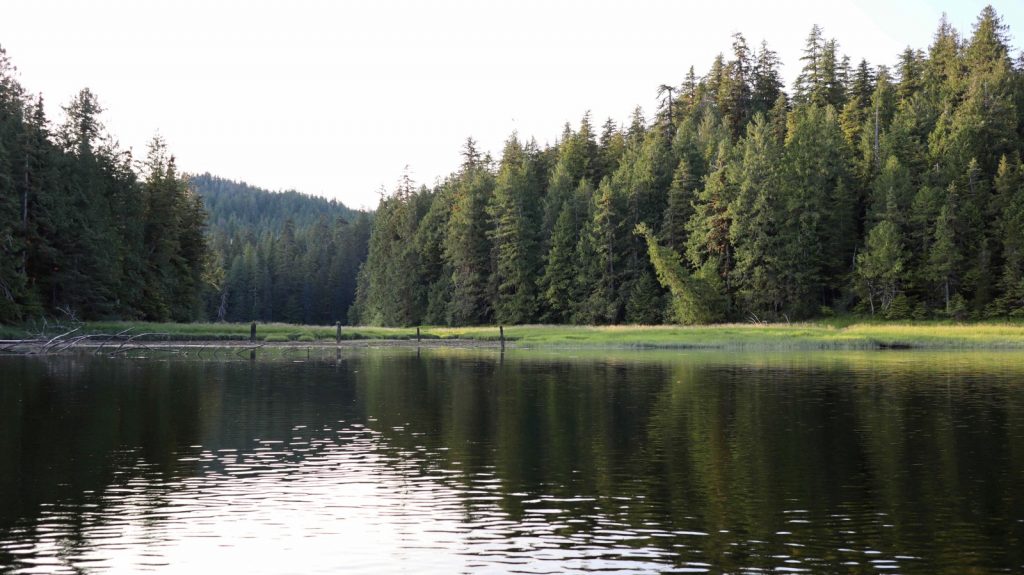 The following morning we got as early a start as our bodies allowed, (read: not really all that early) and motored the two hours back to Bailey Bay. Even a couple miles out from our destination I could see, through the binoculars, no boat on the ball. I motored ahead as fast as I could to get there before some speeding motor boat beat us too it. Lucky I did too as within minutes of our taking the ball, a motor boat was speeding up. They were only going out for an afternoon hike, and knowing how it feels to miss out on the single mooring ball, we tossed our fenders over one side of Meriwether and offered them to raft onto us. They chose to anchor (pride I think) but at least we hadn’t ruined their day.

Kerri and I set off to start our hike, complete with loaded backpacks for an overnight stay in the wilderness. Immediately the trail demanded we climb all the 400 feet in elevation gain scheduled for the day, which we did – sweating like no one’s business carrying all the extra weight on our backs. So it was nice that, at the top of the grade, there was a waterfall that we had to cross. The cool air and water was a relief, and once the socks got wet no matter how hard we tried not too, that also felt great. Another quarter mile and we came to Lake Shelokum where I had figured the trail would level out and become easy. The canoe supplied by the forest service should have been the warning, but we also knew the motor boat family planned to use said canoe, and we wanted to hike in anyway. We left the canoe and trudged on, soggy socks and all. 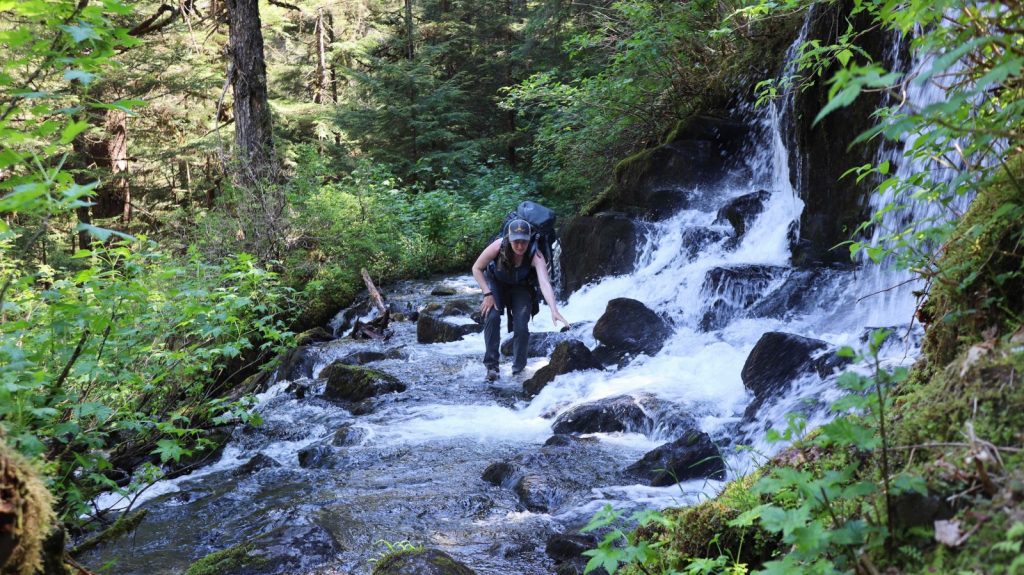 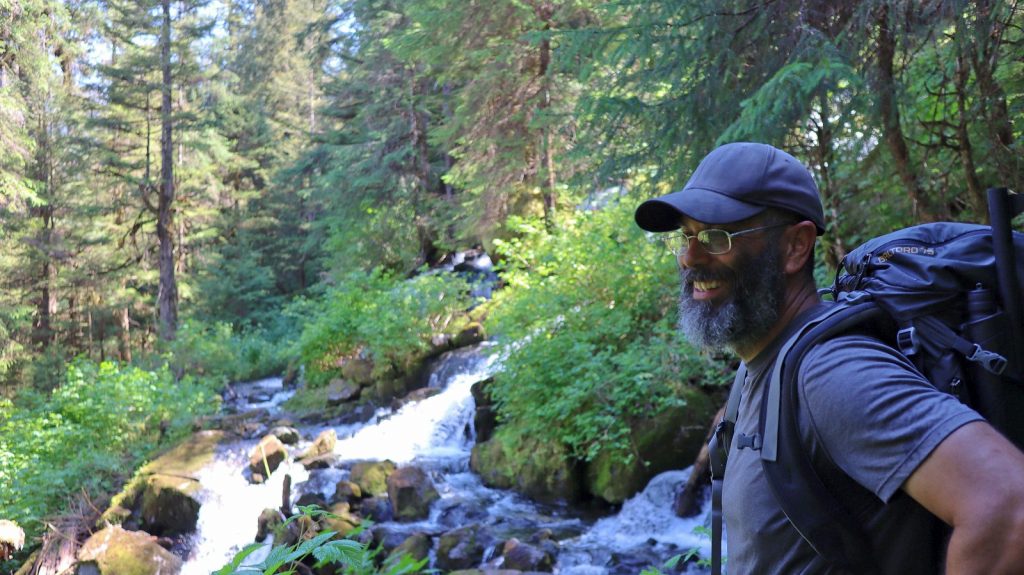 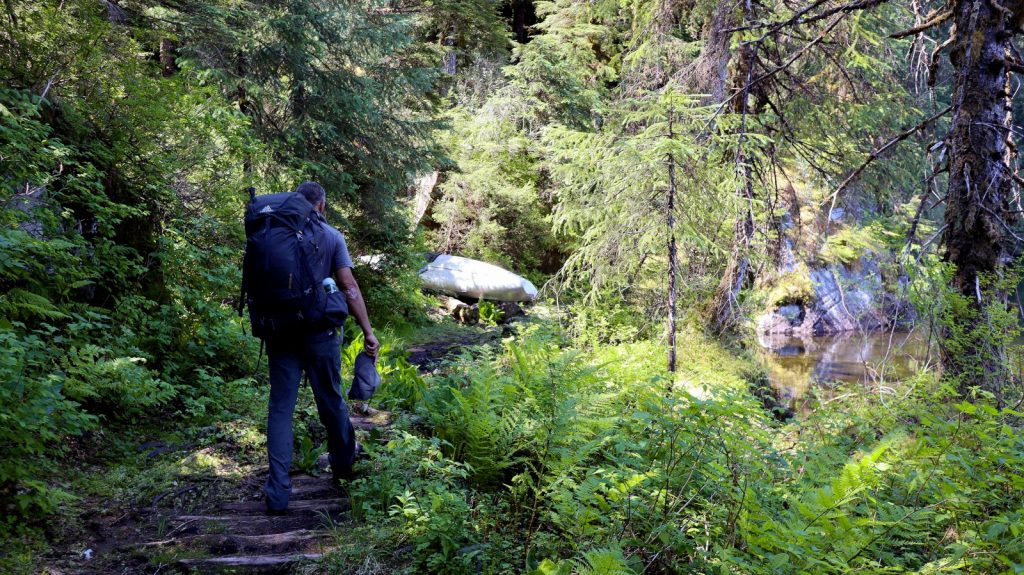 The trail after this point became like a cruel video game. Every few hundred feet another obstacle presented itself to be figured out and tackled. Between each min-boss-puzzle was a sprinkling of ankle breaking holes, rocks, and roots as if they were the dozens of easy minions we needed to pass before each boss. Each puzzle we came upon was more difficult than the previous. The crossing of large mud bogs, streams, and downed trees were easy enough. The scrambling through boulder crevasses – with backpacks – wasn’t as easy. Nor was the balancing act of a 1 foot wide trail along some of the cliffs overlooking the lake. Then came the outright dangerous climb down a fallen tree to the trail now one story below. I had even said it, “this must be the end because that was the boss of all the obstacles”. We really could not tackle a more difficult obstacle, so it was the end one way or another. 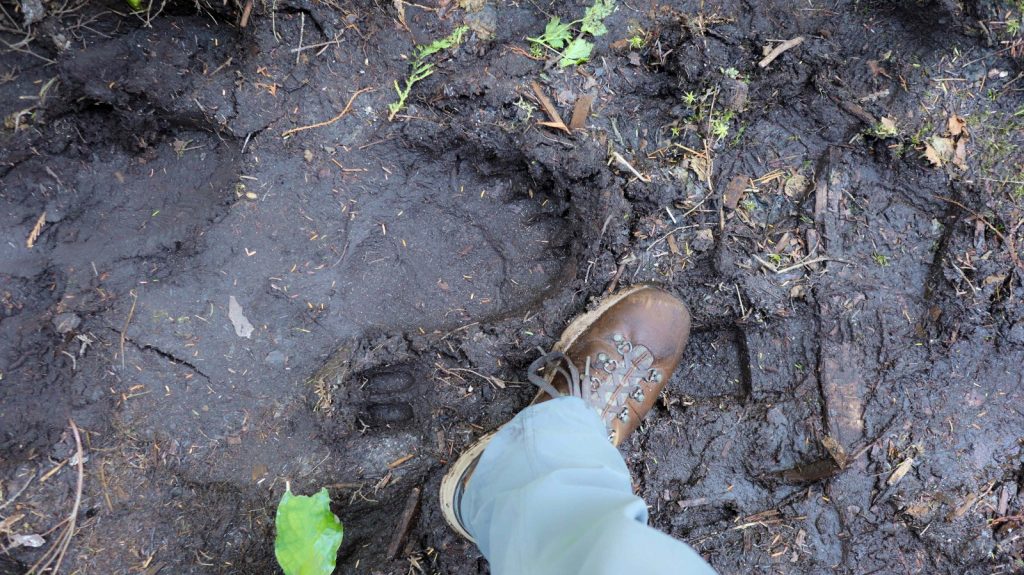 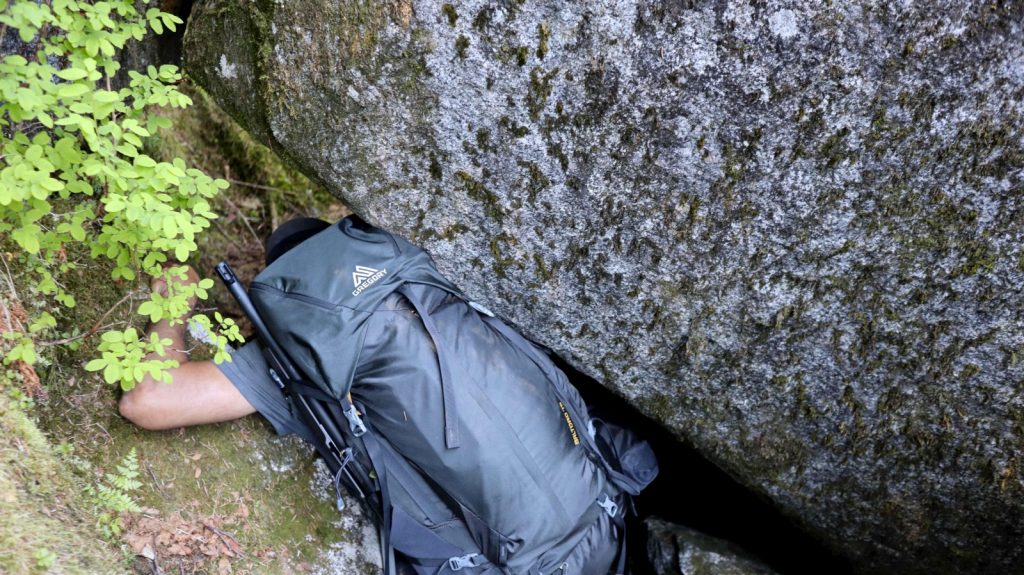 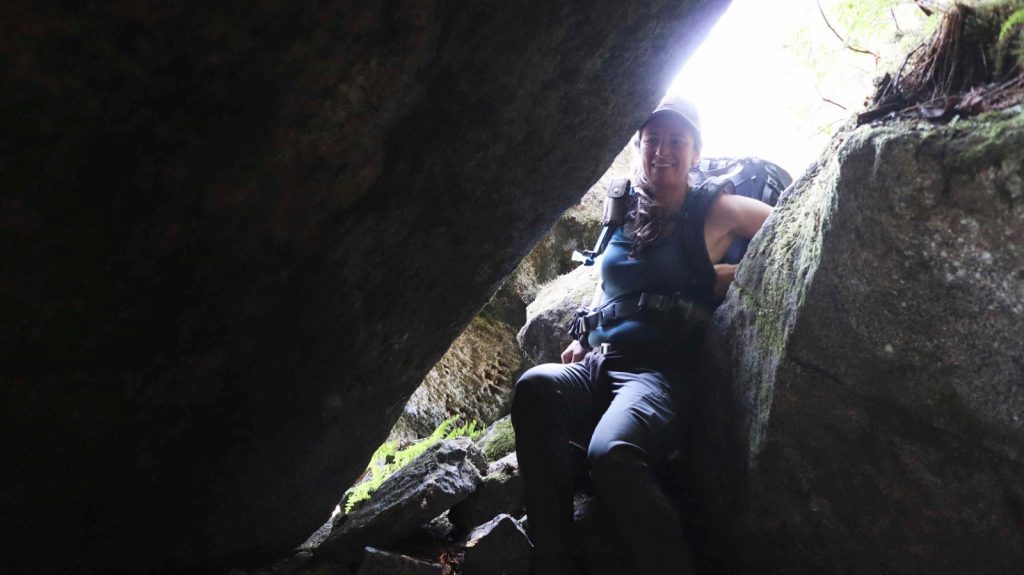 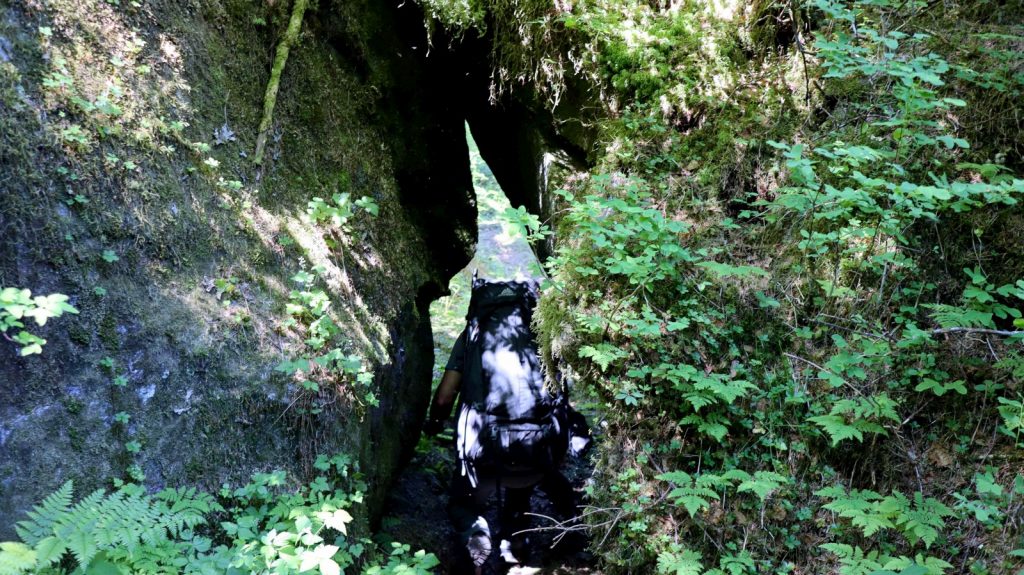 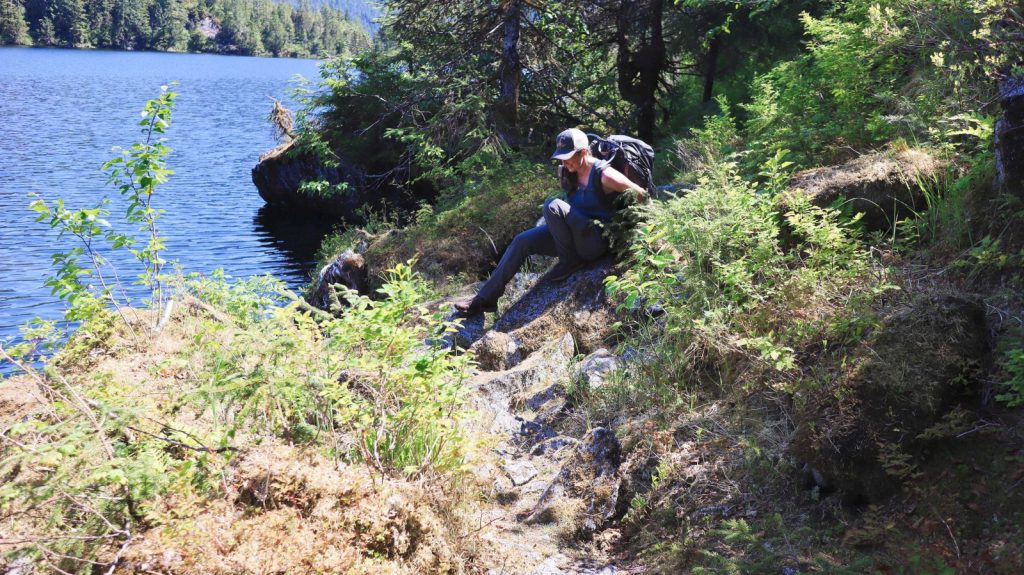 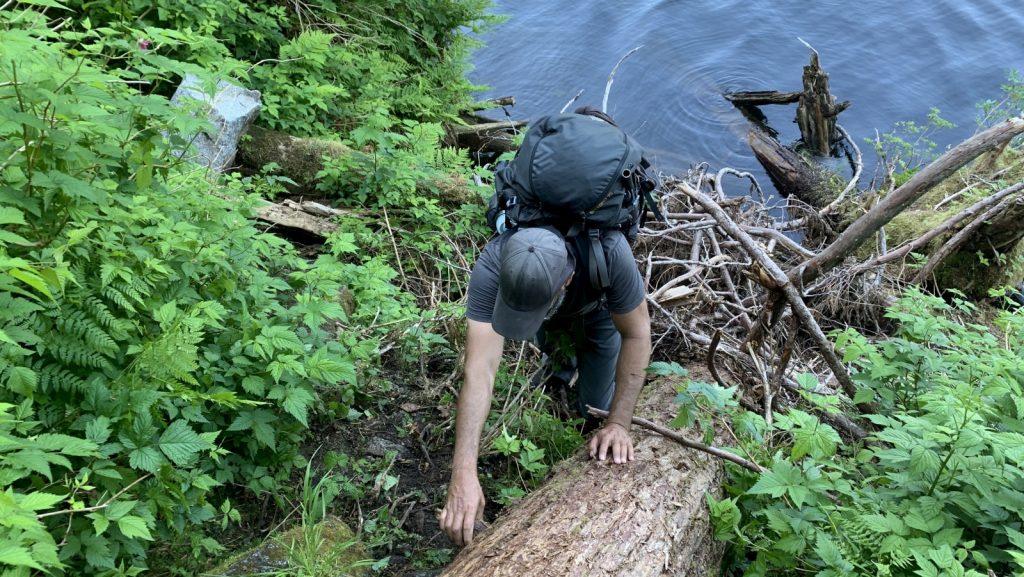 Luckily, I was correct. The trail soon opened up to a Yosemite-esque valley, complete with a half-dome style mountain on one side, and a green meadow and a river at the bottom. Honestly, we both were agreeing that Yosemite was having a tough time standing up to the beauty of this place, but I didn’t want to call it outright. It was a close second if not the top. 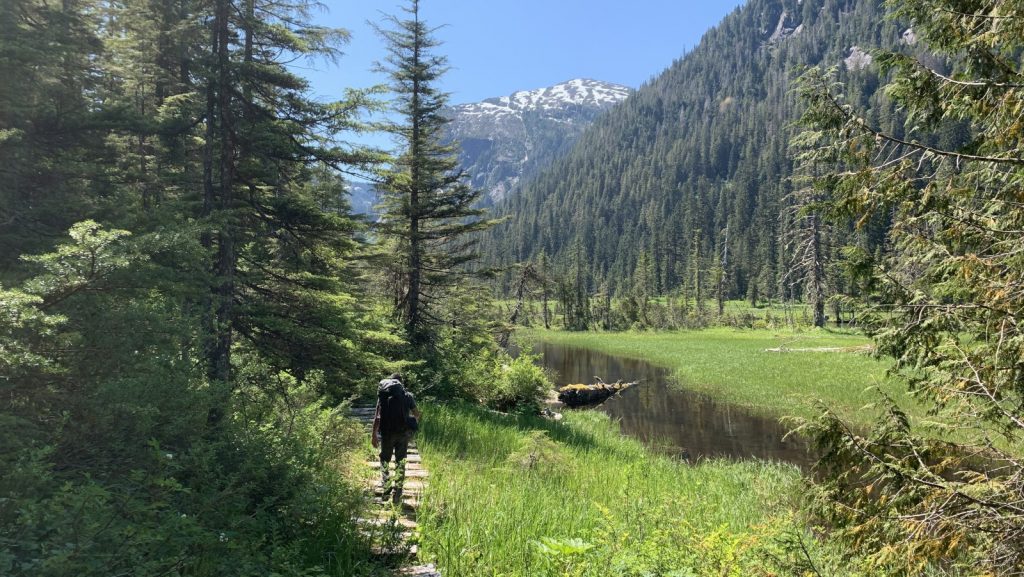 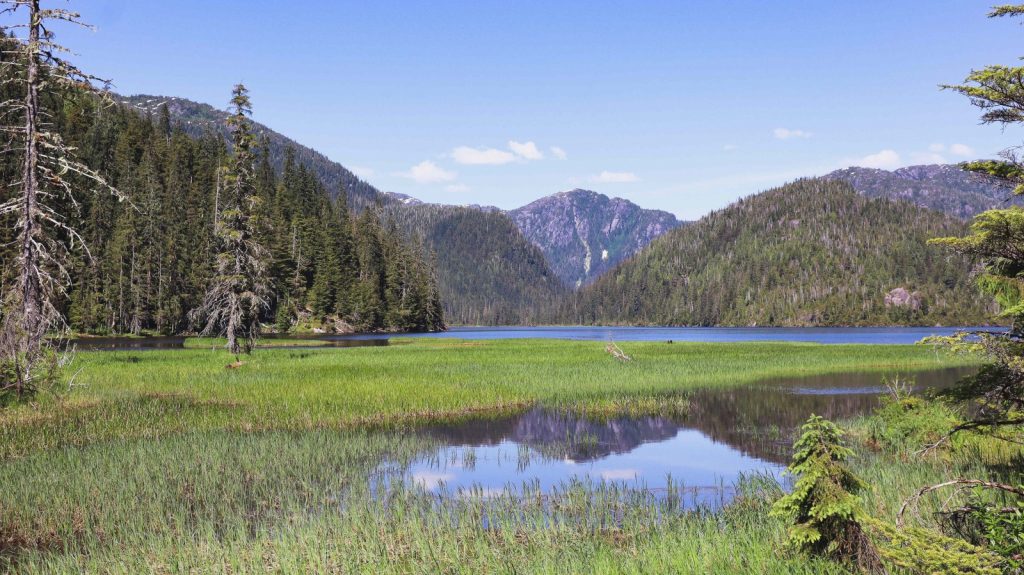 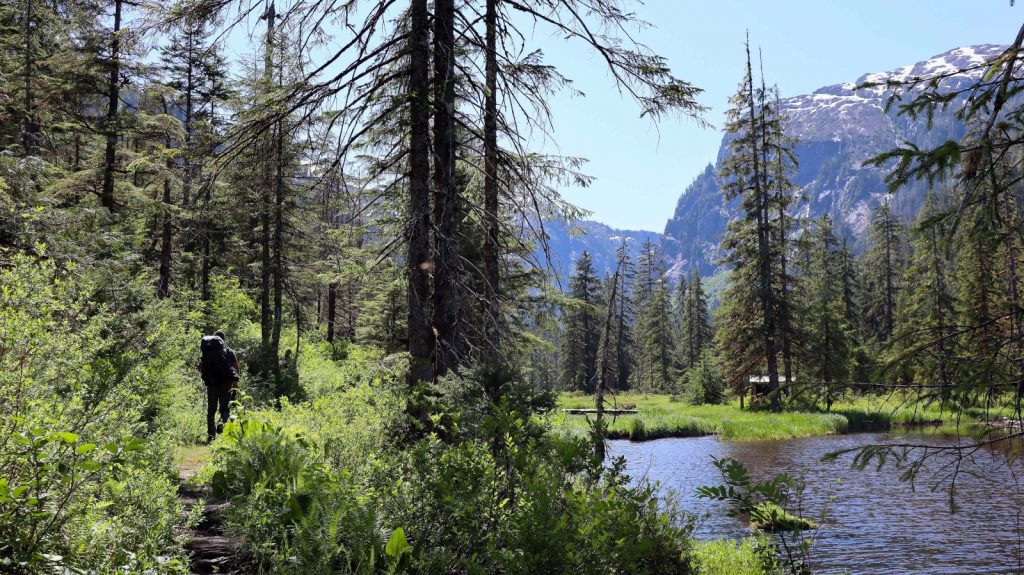 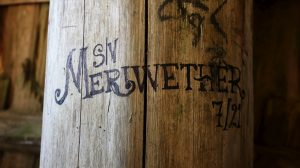 As we got near the hot springs we heard the voices of the family enjoying the springs. They had paddled past us about mid way up the trail, so it was expected. I came up with the idea of paddling back with them – if they allowed – and return with the canoe so Kerri and I would not have to re-tackle that hellish trail the next day. I was extremely happy when they agreed that I could ride along with them on the return trip, which began not that long after our arrival. I barely had time to drop the backpack before jumping into the canoe and paddled for an hour or so before I returned to camp. Yes, it was damn tiring. My neck muscles were cramping by this time, but at least we didn’t have to hike that trail again.

Kerri had already setup camp by the time I returned. At least now we could get to enjoying the hot spring, which was all ours. No one else would be coming this night, that was almost guaranteed between the single mooring ball, the trail from hell, and the fact that we had the only canoe. Our only company would be the gnats and mosquitoes, which showed up in force once the sun was low enough. 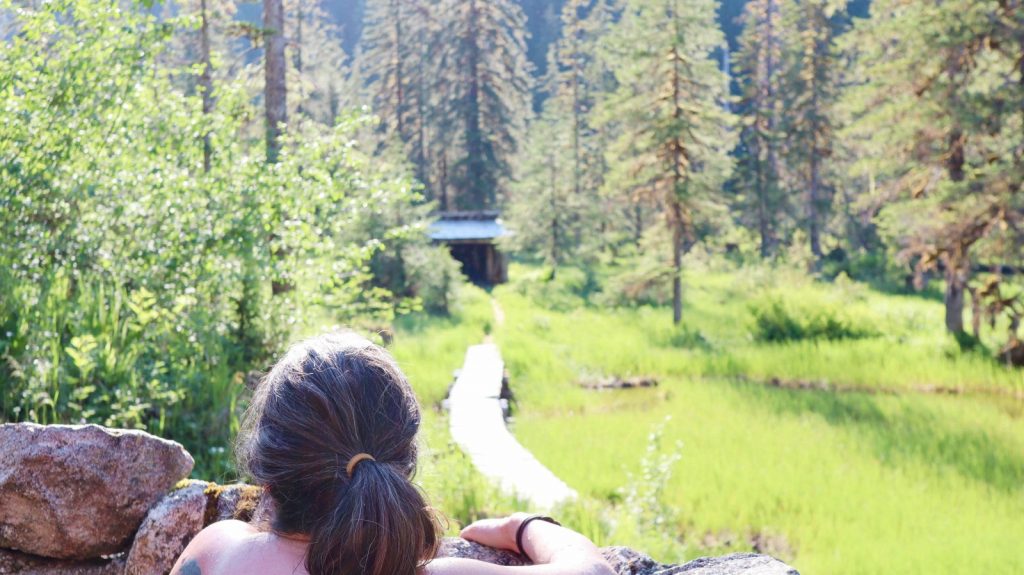 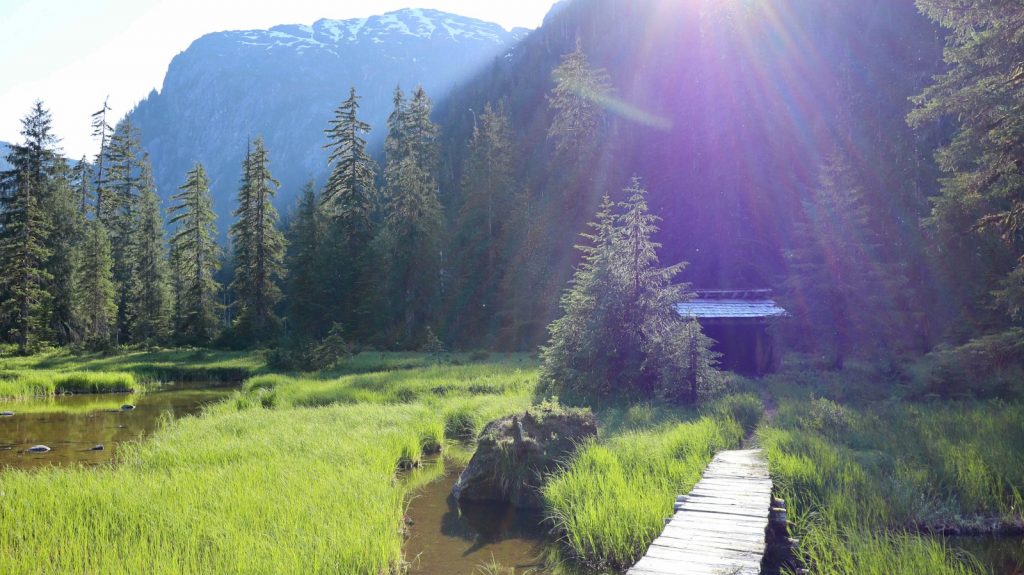 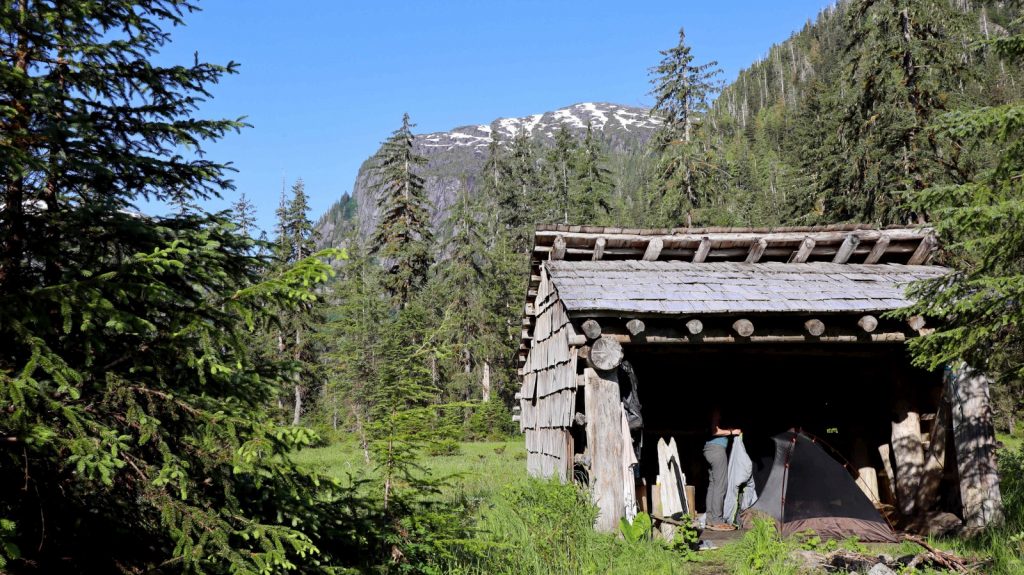 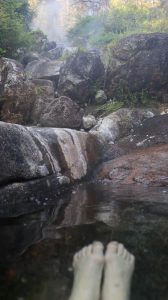 We soaked for a while, enjoyed a bug infested dinner, and retired to the only safe place from the little-flying-tyrants – the tent. Thank god we had the tent and that it was whole. The netting on it made this evening tolerable. We both thought we would do some reading before the sun set, but neither of us made it that far. Asleep well before 9pm was just fine. It was a long and strenuous day, polished off with a hot spring soak. Sleep was the proper next step.

In the morning, thinking the bugs would give it a rest this early in the day, we chose to jump back in the hot spring. This must have woken all the stinkers as they immediately went after us again. They were not biting or stinging all that much, but just the annoyance of a hundred gnats flying in your face (poor Kerri inhaled more than a few… I think my facial hair helped on that front) made it insufferable. We dealt with it as long as we could before starting the process of breaking down camp and packing everything into the packs, and finally the canoe. 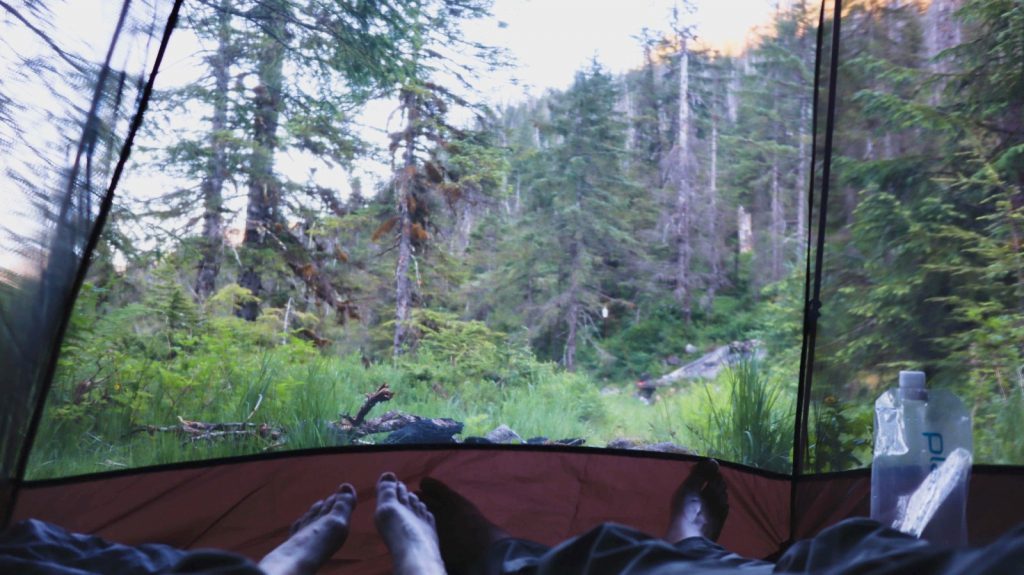 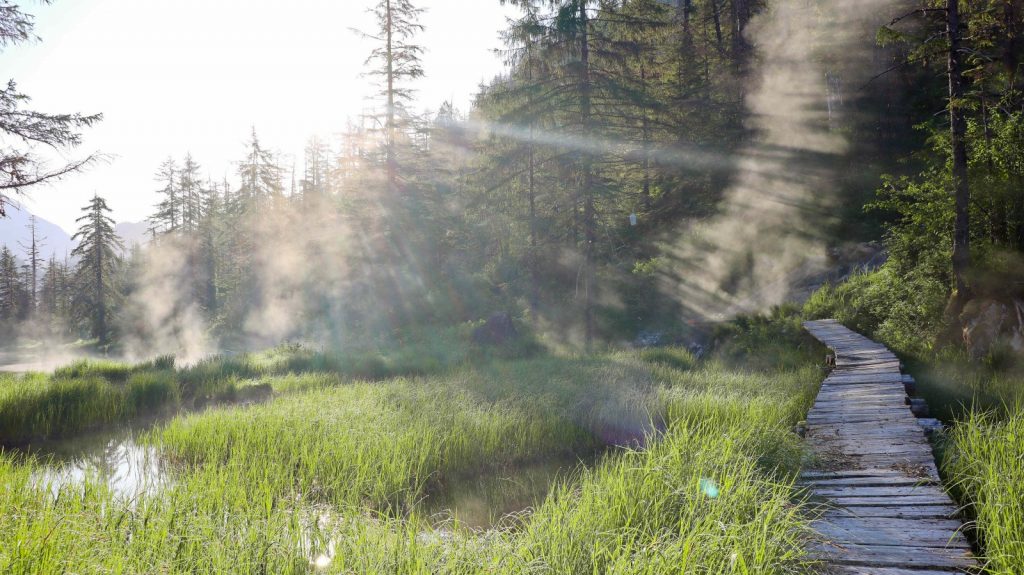 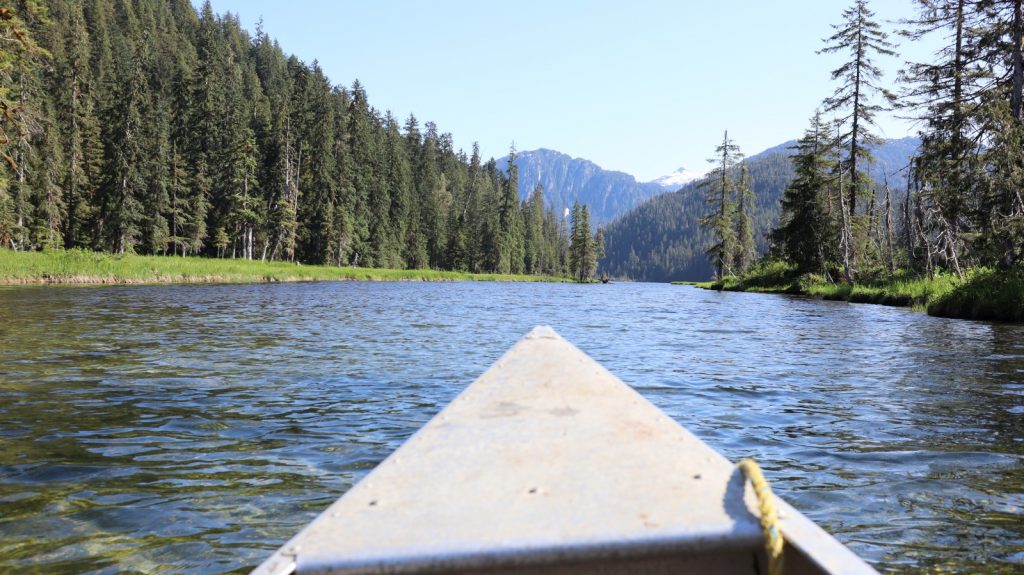 The paddle back was so much more pleasant than the hike. Not only was it easier on the body, the bugs did not come out into the lake. We made it to the waterfall, going shoeless across this time. Unlike the day before the water must have been 100 degrees colder, both of us struggling to make it across without toes falling off from frostbite, but we persisted and made it through. Not long after we met back up with Meriwether to start another long day of motoring to our next overnight anchorage.