A great sail around Maury

Leaving the marina felt amazing, and it was one helluva confidence booster, but our day on the water would be the cherry on top of one of our best sailing days to date. It started with the simple act of pulling the knob to kill the motor after only a few minutes of use to exit the marina break wall. The wind that had caused me near-panic when trying to leave our slip in the marina, was ideal for sailing the direction we wanted to go. That’s right, the wind was favorable for a change. With sails up, we sailed straight across the shipping lane and towards Maury Island with the wind on our starboard quarter (rear-right). Perfect clear weather accompanied us as well. The joy of being at a point of sail that we do not normally get to experience was not lost on us. 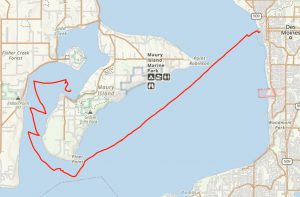 As we started around the south side of Maury Island, the northerly breeze would begin to be blocked by the island itself. With hindsight now, we should have sailed further south and away from the island to prevent the wind-shadowing that slowed our boat speed to a crawl for the next couple hours. A half mile further to the south, I could see other sailboats out there with a full serving of wind in their sails. We were in no rush and fully enjoying the calm sail in mild winds so held our course and took the chill approach. I should of raised our spinnaker – a much better light wind sail – but just felt lazy and was happy to relax instead. Snacks and chats were had under a glorious clear and sunny sky. 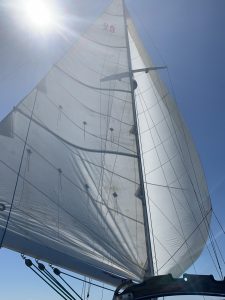 Eventually, as we closed in on the southern tip of Maury Island, the wind would attempt to ruin our day. Already running almost dead-downwind we needed to steer to the port (left) a few degrees to clear the island’s southern most tip; Piner Point. Kerri brought up the genius idea (because I was in a brain-fart loop) of going wing-on-wing, instead of jibing, to get around the island. It would mark our first time going wing-on-wing in Meriwether. We had done it on our training boats back in January of 2019, but not since. It does take a bit more concentration as there is a very small angle to the wind that we must keep Meriwether to prevent the boom from sweeping the deck (and causing damage to itself) or the head-sail from collapsing due to lack of wind. The challenge was exciting and fully enjoyed by us both.

The turn to the right rewarded us with a vortex of wind boiling off the southern tip of the island, causing extremely shifty and light winds at times (again, we should have gone further south to avoid the obvious). The wind here would eventually die off, then come at us from a completely different direction, only to die off again a few minutes later, and repeat the annoyances. We were not detoured and refused to allow it to ruin our so-far-perfect day on the water. We hung with it, making dozens of adjustments, eventually coming out the other side of the vortex area to be treated with a beautiful 15+ knot headwind. We knew we would be tacking up wind, but again we were in no rush. With Kerri at the helm and me handling the sails, we close-hauled and let the wind heel Meriwether over. As our speed increased, so did the apparent wind on the sails, which would generate even more speed… and more heel. We were seriously hauling with our toe-rail taking on water (something we feared not that long ago) and loving it all the way. There was no turning into the wind to flatten the boat, only active attempts to take sea water on our deck. Good times!

Five tacks later and we were deep enough in Quartermaster Harbor to start planning our anchoring spot just outside the marina at Dockton Park. Intentionally over shooting our desired anchoring spot, we found ourselves between the wind and the anchorage, allowed us to turn our back to the wind to wind-shadow our head-sail with the main to easily furl in the head-sail. This left us with only the main sail to deal with, which we turned Meriwether back around to stick her nose (and metaphorical middle finger) at the wind and take our time to drop and flake our mainsail. Only after all that was accomplished did I turn the key to start our motor again, which stayed running for only a few minutes as we dropped and set the anchor, ending a near perfect day of sailing – the motor getting less than 20 minutes of use in the four+ hours on the water. 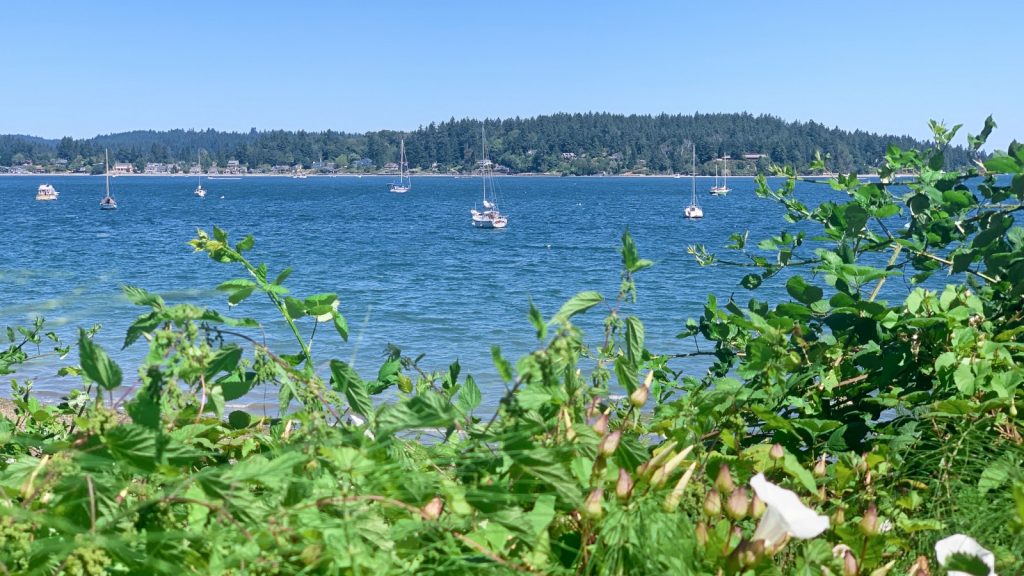 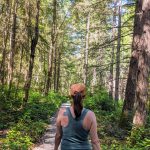 We set out the following day for a hike through some of the trails of Dockton Park but were unimpressed by them as hiking trails. There would be (and are) amazing mountain biking trails, but as hiking trails they were a bit boring – practically paved. So we hiked into the small town of Dockton to get a glimpse of the one hundred year old houses that lined the hillside above the harbor. I only went along in hopes of finding an ice cream shop, but did not. Maybe next time. 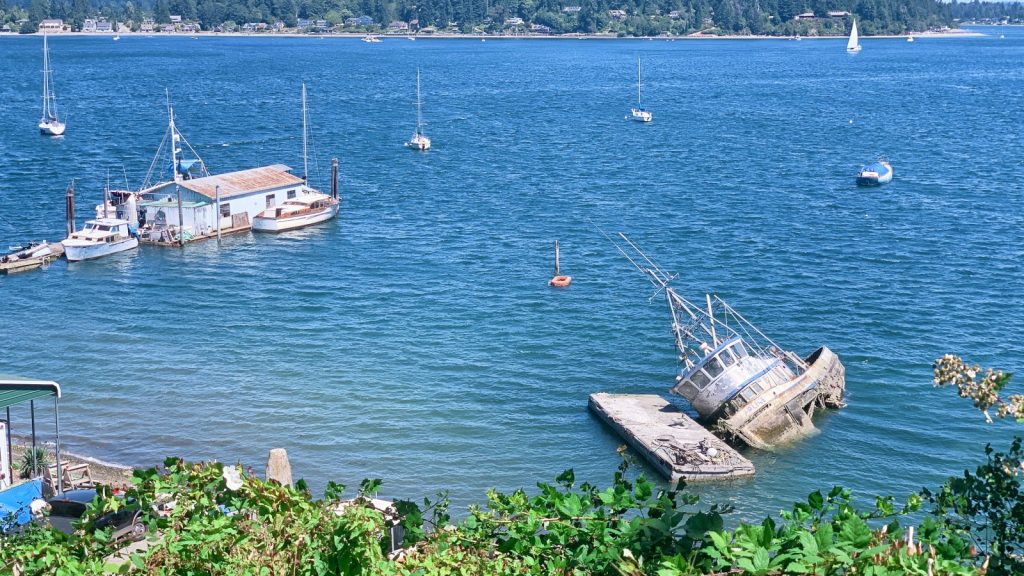 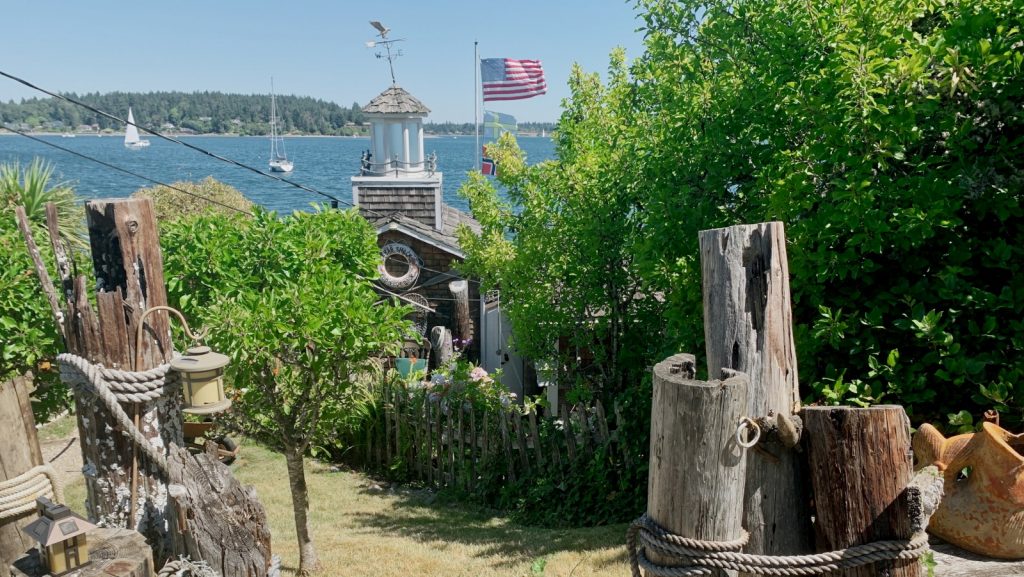