Patos Island is only a few miles away from our last stop. Barely enough time to raise the sails. Not that we had any wind anyway, so the decision was already made for us to motor over. At least the alternator will charge our house battery during the two hours (we cruised it, nice and slow). We even took the long way around the island to avoid some heavier current flows on the other side. We had time, so why not. It wasn’t very exciting – motoring never is – but we made the best of it. Finally, just as we started around the final corner to turn into our cove, something to our starboard caught my eye…

I thought it was a large rock, so I checked the tablet to see if it shows on the chart. How could I be so stupid as to allow a rock to sneak up on me?! I was just about to be furious with myself when I couldn’t find it on the chart. I looked back up and the rock was gone. What the…? I had just written it off as old-age when the rock rose back out of the water in front of my eyes. Kerri noticed it this time and we both watched the rock blow water into the sky. It’s our first whale!

I quickly positioned the boat to avoid the turn into the cove and set the transmission into neutral. I didn’t need to be any closer to it, but I didn’t want to immediately motor away either. Instead we just sat there, drifting, and the whale swam by, showing the arch of his back a few times. Finally, a blow, a breath, and dive under water finishing with a full-monty tail before leaving us there standing on our lower jaws. A finale fitting only of a whale. This boring little two hour cruise just got worth it. 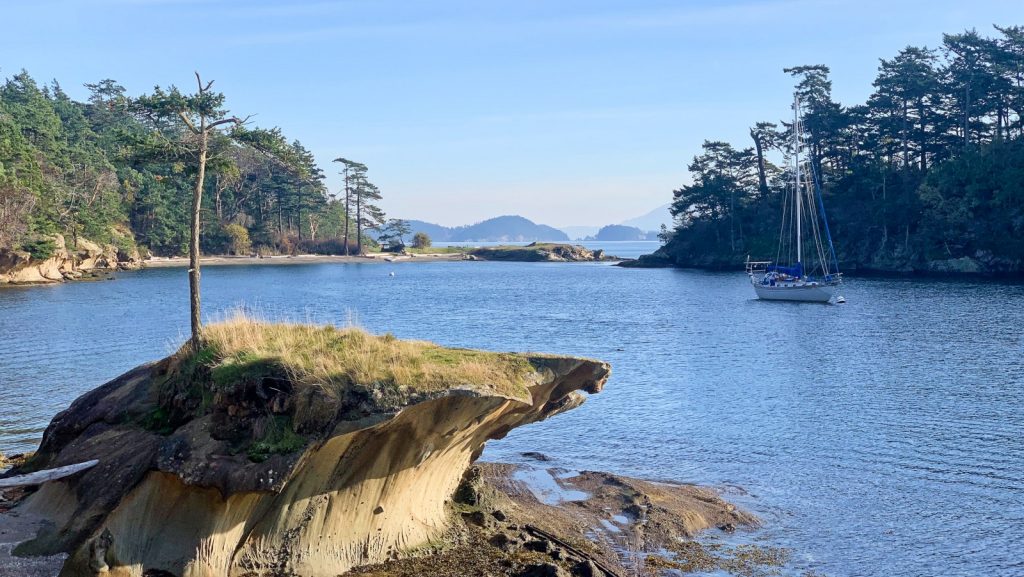 We finally regained ourselves enough to put the boat back into forward gear and started into the cove. A mooring ball awaited us, so we set out to perform this now mundane to us task. It was clear from the other boat in the cove that the water was flowing in (it was facing me) with the current so I passed the ball, made a U-turn and pointed Meriwether at the ball. Everything was going just fine, Kerri even got a line through the ball, until the current caught the bow of Meriwether and was pulling away from the ball. Kerri says, “I’m not sure I can hold onto it” and moments later let go of the mooring line. It was a fight that she had no chance of winning. We tried again… failed. Again… failed. And again… failed! We have never missed a mooring ball before, and now we just could not get the line through the ring and tied back up before the current would push us away. We kept our cool, knowing that it is no big deal really. At least we did not have an audience. We would eventually find the right combination of angle of approach, throttle, and rudder to grab the ball, and finally get to shut down the motor and start relaxing. 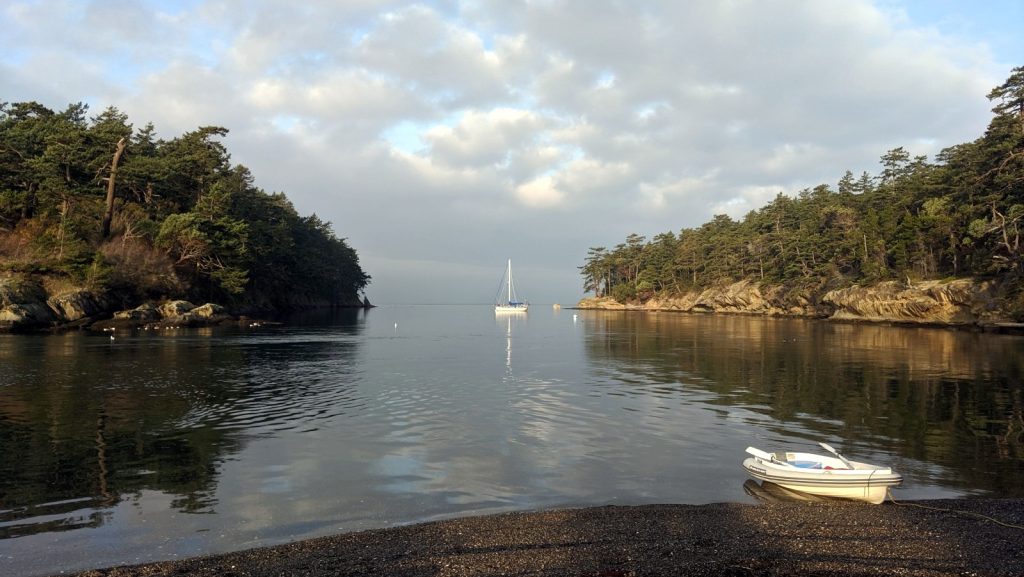 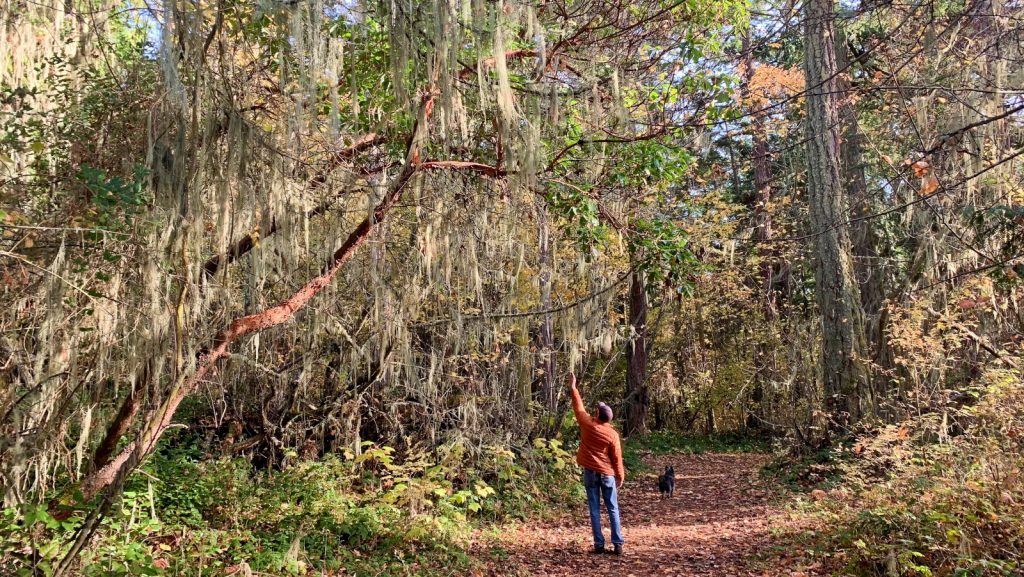 Knowing this was only going to be an overnight stop, Kerri and I both wanted to get to explore the island right away. It was a beautiful afternoon, so we decided to paddle ashore and go for a family hike – the three of us. The short trail on the island turned out to be a lot longer than expected, but the two or so miles around was good. For me, it brought back memories of us backpacking on Cumberland Island for some reason. It ended at the light house, which we explored and photographed as we do. The other boat in the cove was motoring away, leaving us on the island all by ourselves.

The evening came upon us fast, with sunsets happening in the 5 o’clock hour this time of the year. Not much to do but start a fire in the wood stove, fix a meal, and snuggle under the blankets together watching a movie long enough to not already be asleep before 8 pm, which does happen from time to time. 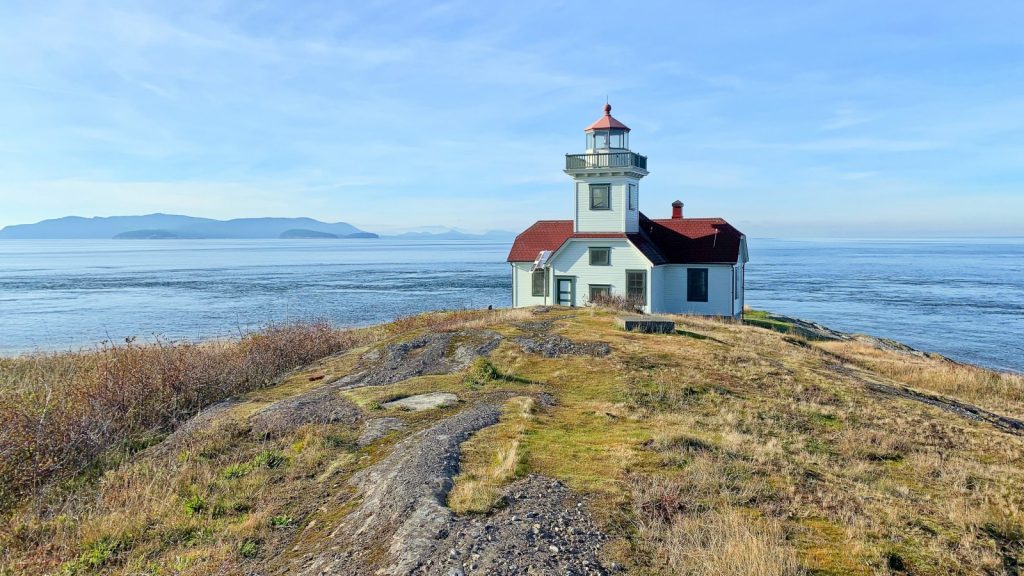 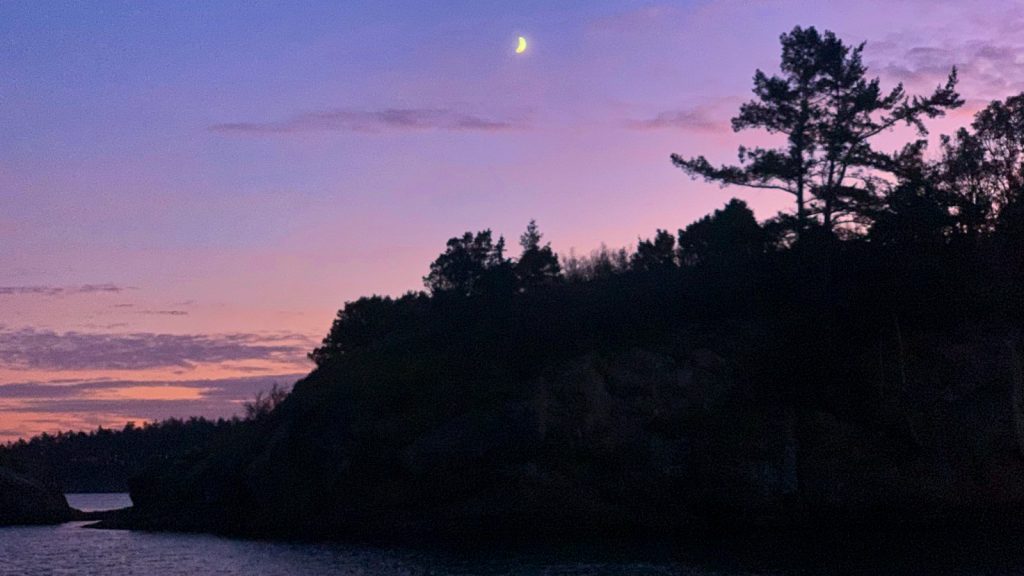