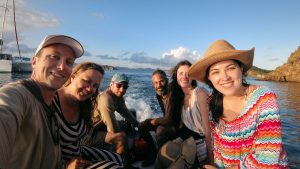 During the week long grind of life in the BVIs there were some happenings that stood out as highlights. I know. I know. The whole trip was one big highlight, but within that bigger picture there are a few memories that will stand out and I wanted to share those with greater detail.

Right out of the gate, on day-2, we were directed to an anchorage to explore a section of sea caves. We took a mooring ball between our sister boat and a massive 50+ foot yacht. I was the first person to put on the snorkeling gear and jump into the water. Just as I began swimming towards the caves I noticed how our boat was pivoting on the ball differently than the yacht. A collision was imminent! I quickly jumped back onboard, and we moved our boat to another ball. I’m sure happy I noticed that before swimming off, otherwise it would have been an expensive mistake. After the move, all of us got to swimming towards the caves. Just as the water shallowed, at the entrance of the cave, was a huge school of tiny fish. A wall of fish so thick it could not be seen through. Only when one of the large fish swam through would the smaller fish part, only to see even more fish behind. I went for it, gleefully penetrating the cloud of fish. Eventually I was completely surrounded by these fish. The cave was okay, the fish were insane. 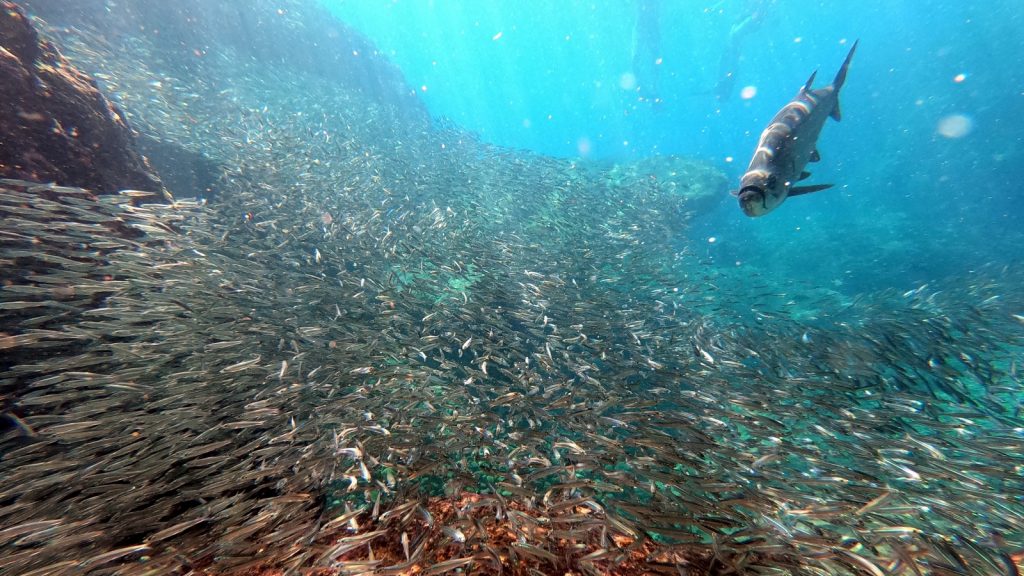 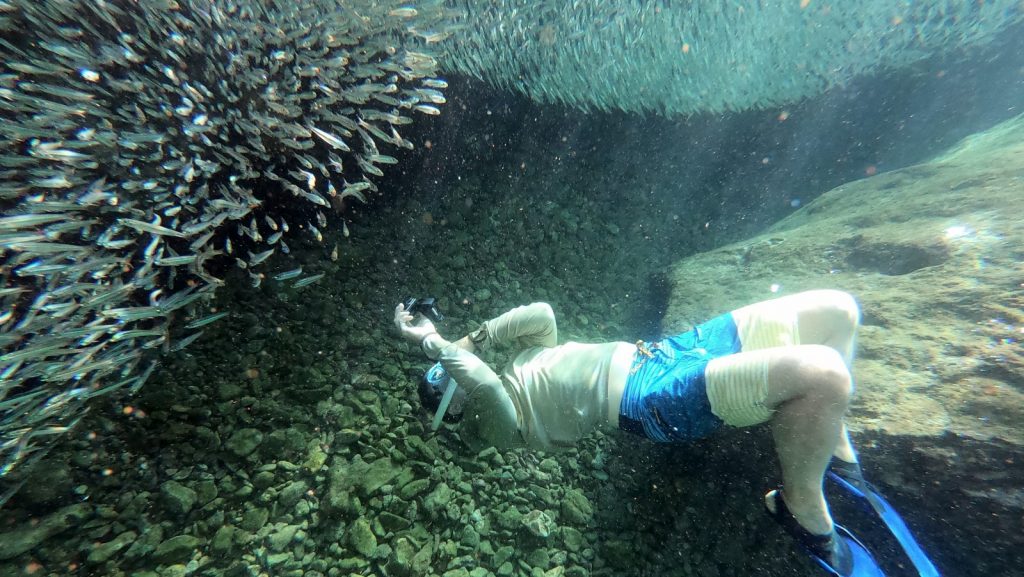 On our second full day of sailing we had a squall come in and just touched us. “Only the tip” became the joke for the rest of the week, because we only got the tip of the little storm. Still, if was a first for us (Kerri and myself) although not a whole lot of drama. I still put it on my mental sailing resume. Then came the following day as we were on the north side of the big island (Tortola) in more open waters. Not long before we would have reached our destination a larger squall appeared right in front of us. The wall of rain it was pouring down was visibly impenetrable, offering no view of the island we were aiming for once it entered the stage. The winds were still very nice for sailing even as we started to get a massive amount of rain. Only as we hit the center of the squall did the wind decide to make two large 180 degree changes on us, both of which tacked our sails without permission… both of which we caught and reacted too no big problem. It was pouring down like no one’s business as I made the call to drop the sails and motor the rest of the way through the rain. A call I regret in hindsight, but it was prudent at the time. I put everyone to work reigning in the sails while I did what I could keeping the boat pointed in a direction to make their jobs easier, half way successfully. It was an adrenaline filled 15 minutes which we all came out the other side soaking wet. The only casualty was our little plastic signal horn, which caught a gust and went overboard. Seth took the time to grab some video of it all before I put him on a line to work.

On Friday evening the crew on our boat decided to stay in. The crew on the sister boat seemed to be keeping it low key for the night (the night prior they partied hard) so we kept to ourselves. Out came the dinner, then some music (which I started complaining about), then some drinks. My complaints were heard and after a few rounds down everyone’s gullet, the challenge to find some music that would make me get up and move was accepted. Now, I don’t dance. I just don’t, so good luck trying to pressure me into it… it won’t happen. However, since the crew was having such a great time I offered them the slightest of hints that some level of disco-funk… or Ricky Martin… might do the trick with the amount of alcohol I had in me. It turns out that Mark Anthony did the trick. I partook in a few seconds of dance. Just a few though, otherwise I stayed seated enjoying the whole thing. A captain can’t be fraternizing with the crew… aaarg! 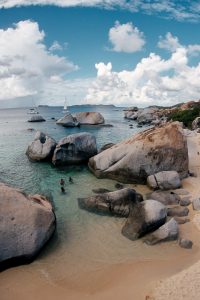 Late in the week, after a day of fantastic sailing, we met with the sister boat at The Baths, a National Park on the island of Virgin Gorda. Here we left our dinghy tied to a buoy not far from our boat and were shuttled to the other end of the park by one of the guys on the Catamaran. From that point we could hike through the rocks-and-beach that make up The Baths. It very much reminded me of formations in Utah, but at sea level… and in the beach. A lot of oooo’s and aaaahh’s from our group as we rounded one rock after another and took in the view of the next scene. Once we came out the other side we spent another half hour snorkeling the seaward side of the rocks, where numerous cracks and cliffs full of sea life awaited our exploring eyes. 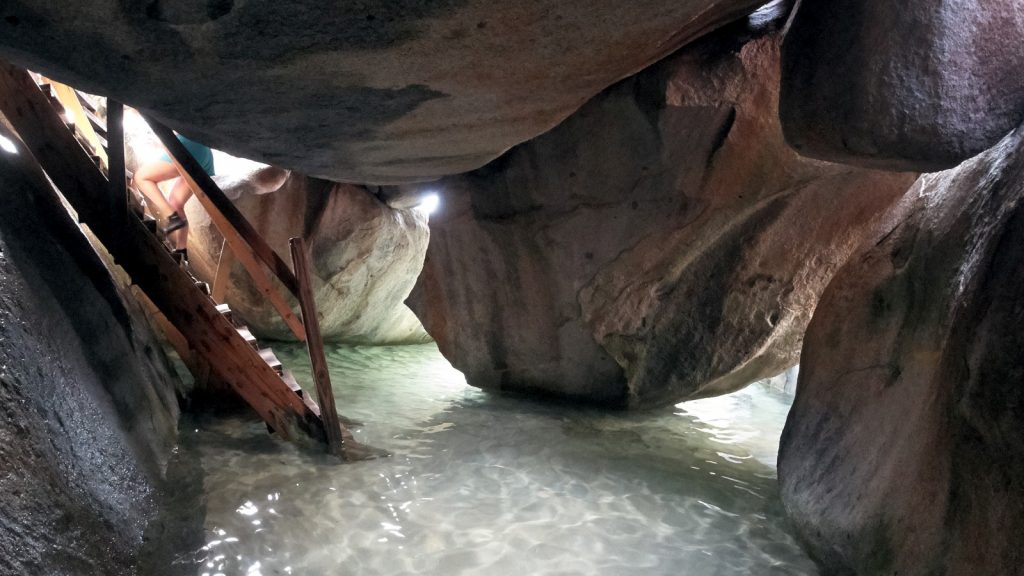 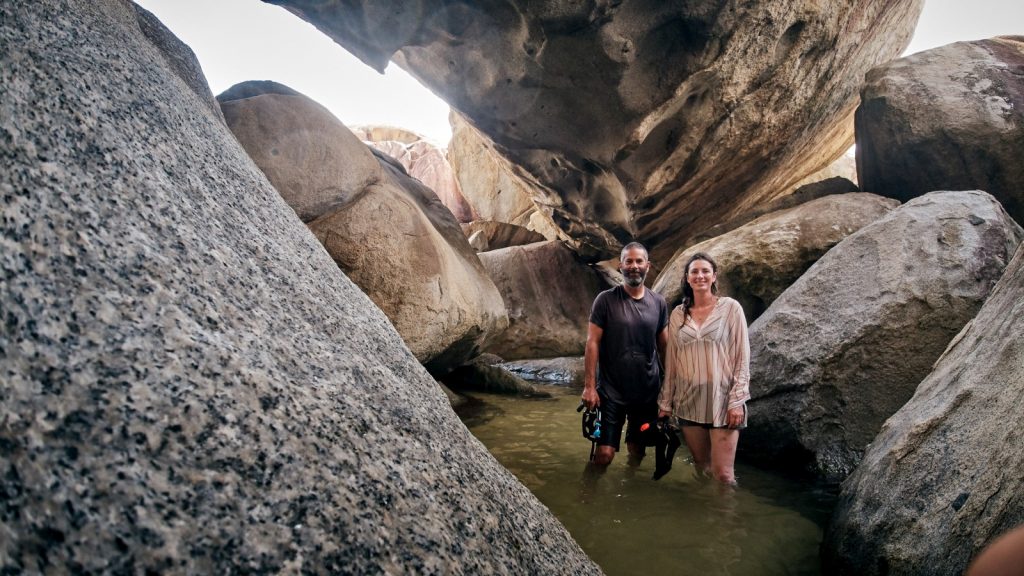 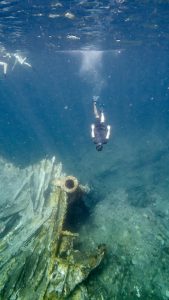 And on our final day we spent the half day at a shipwreck that sunk long ago in waters shallow enough (at least part of it) for us to snorkel on it. After hooking onto a ball we all swam to where we thought the shipwreck was but did not see it. There aren’t signs or anything pointing to it’s exact location, so a shipwreck hunt was under way. It didn’t take long for the other guys to find it a few hundred feet away, so I swam over. The wreck lay about 20-30 feet below on the sea floor. As I hovered over it my thoughts were just oozing with the fantasies of what might of happened and how the men onboard felt during the sinking. I figured this was the time to touch my first ever shipwreck, so I took a deep breath, dove down, and got a finger tip on it before my old-smoker’s-lungs gave out on me.