The daily grind of the BVIs

My days in the BVIs were generally spent waking before the sunrise to start the every important infusion of caffeine while sitting in the boat’s cockpit enjoying the view, and a little peace and quiet. Others would wake, rise, and join me over the course of the next hour or so. Even Kerri would rise at a reasonable hour, but only after her necessary in-bed coffee. Galley Captain Laura was often the one to cook breakfast for the whole crew, which we were all very grateful for. It was hot down there, even in the mornings, and with the burners going I could only imagine. By the end of the sunrise it was hot enough to start panting. For the majority of us, the first thing to do was jump into the water each morning to cool down. By 8 am it was a necessity. Eventually we would clean up, make contact with the other boat to decide on a day-destination, and head out to said destination. 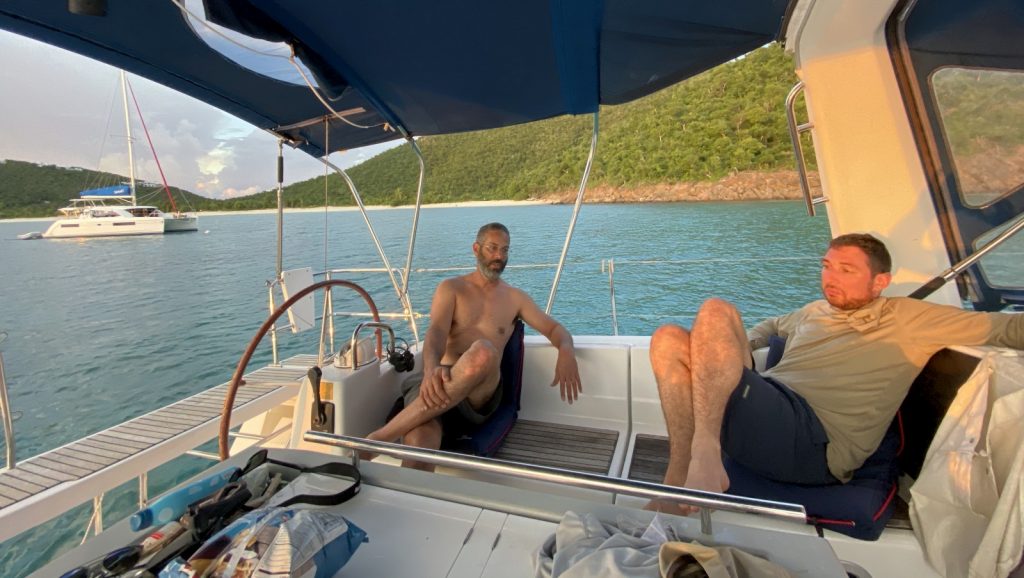 Myself and Taras starting our day, always with minimal clothing 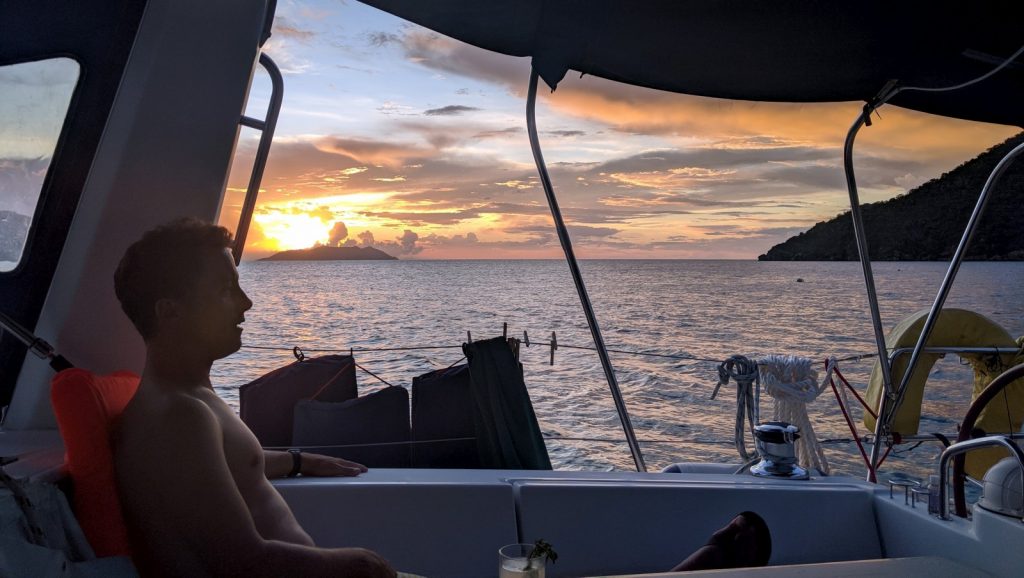 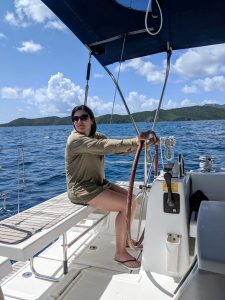 Laura at the helm

The sailing consisted of only a couple short hours – or less than 10 miles. The islands in the BVIs are all quite closely packed together, so there was never much of a rush to get going or get there. As often as possible we sailed for as long as we could during each trip, but there were always times where the sails were dropped and we were forced to motor a bit. The wind blew pretty consistently after the first day and always from the east-ish. That made for easy trip planning and only one day in which we needed to beat against the wind. We were on the move enough each day so that any and all had the opportunity to take the helm or manage the sails as much as they wanted. I know, because I still feel it myself, just how exciting it is to be in control of a sailboat on the move. Part of the captain’s responsibility – and I hope I did this to everyone’s expectations – is to ensure everyone on board has opportunity to take control and experience that excitement. 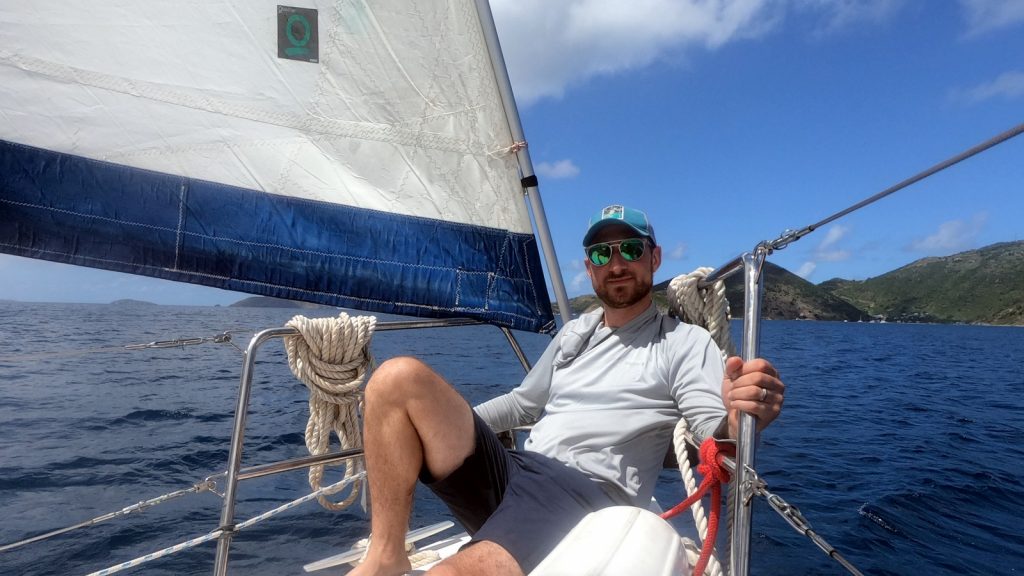 Our day-destinations were normally a marine park, national park, or some other day-use snorkeling area. We would arrive by noon, stay for a few hours enjoying the area then head off to an evening-destination to anchor or moor for the night. With the boats shut down for the rest of the day, and the sun setting, we would gather together for happy hour(s) of stories, drinks, and laughs. Once dinner was being dished out on the catamaran, the parties would split onto the individual boats for the rest of the evening, although we often lost a crew member or two to the bigger party each night. 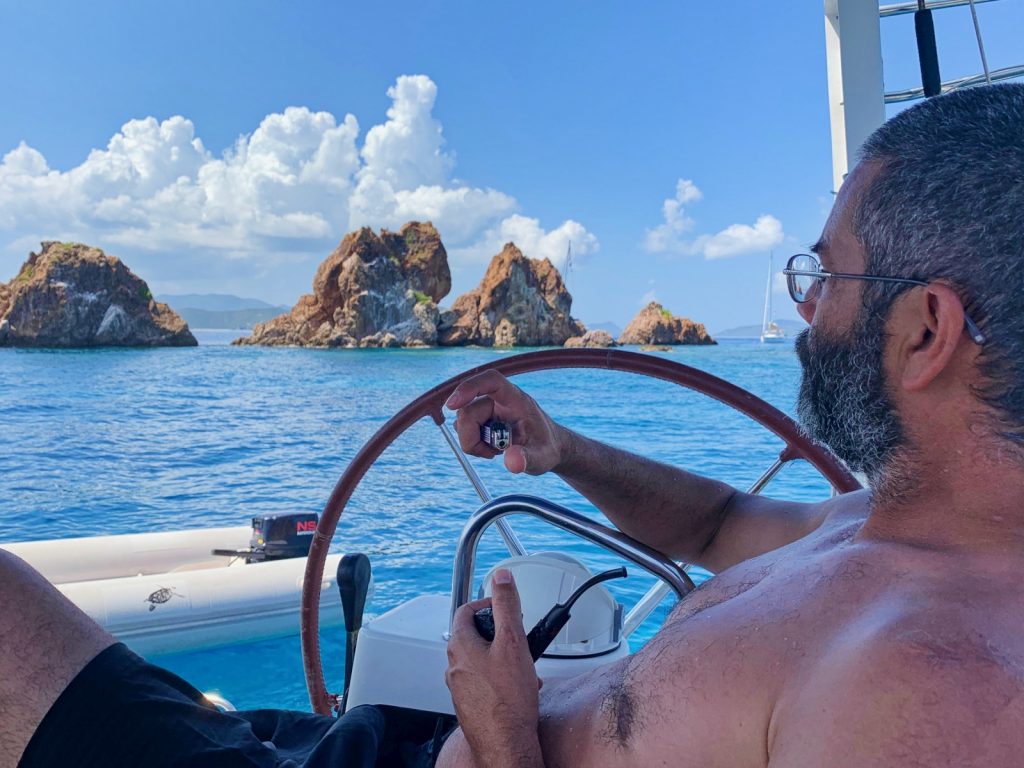 The captain knows how to take it all in 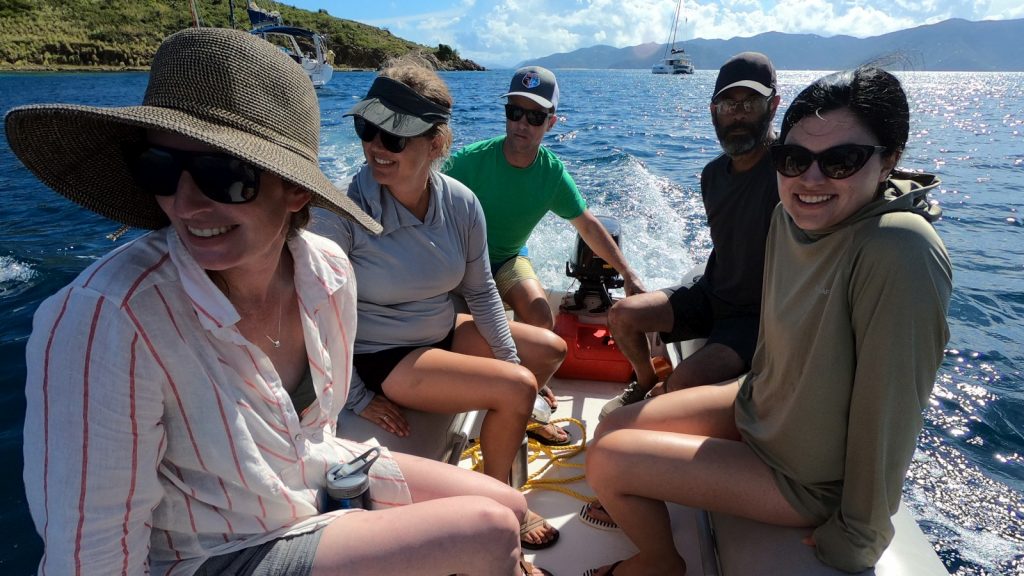 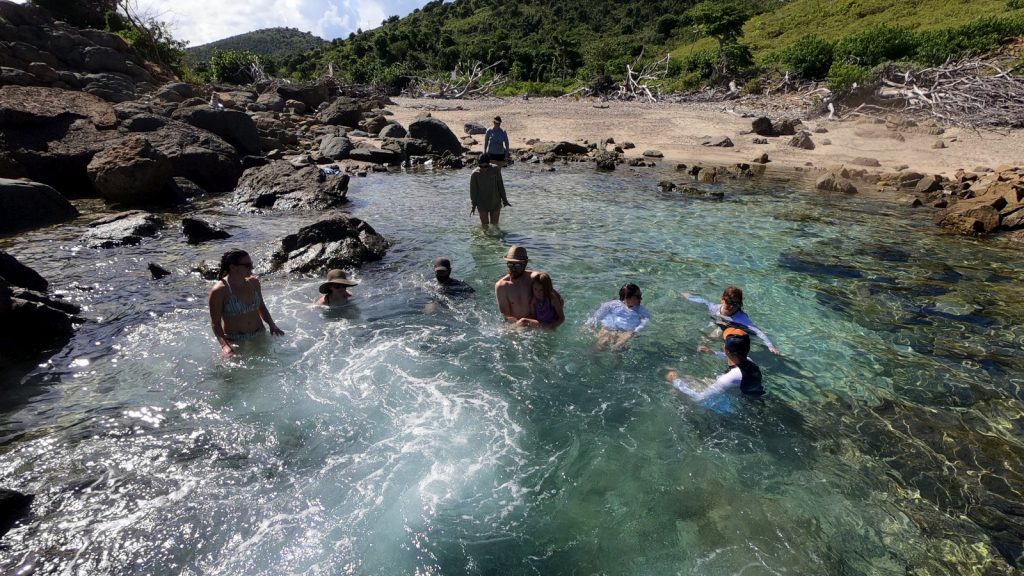 We visit the bubbling springs to escape the heat… it was still hot. 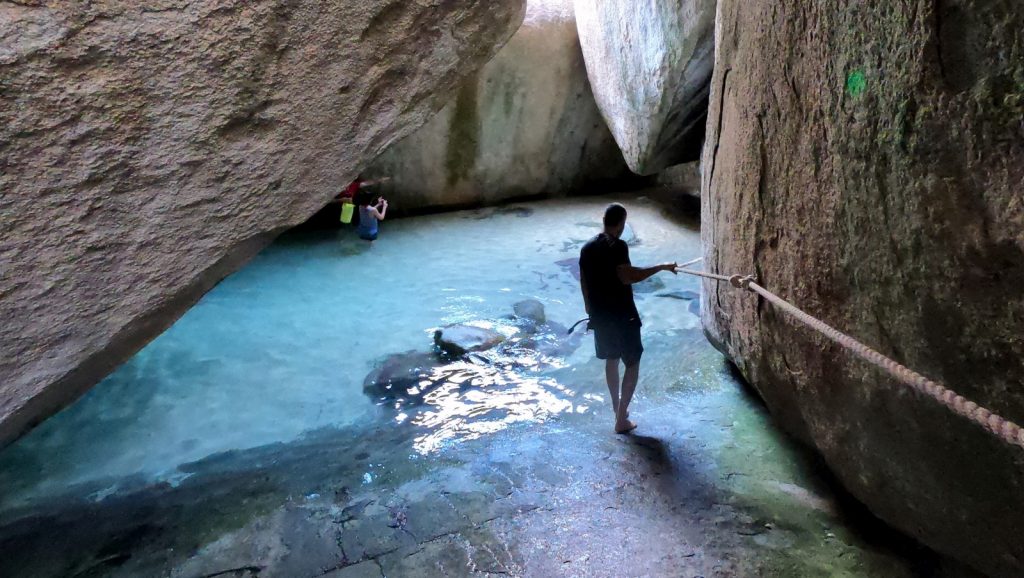 The visit to The Baths on Virgin Gorda was mind blowing 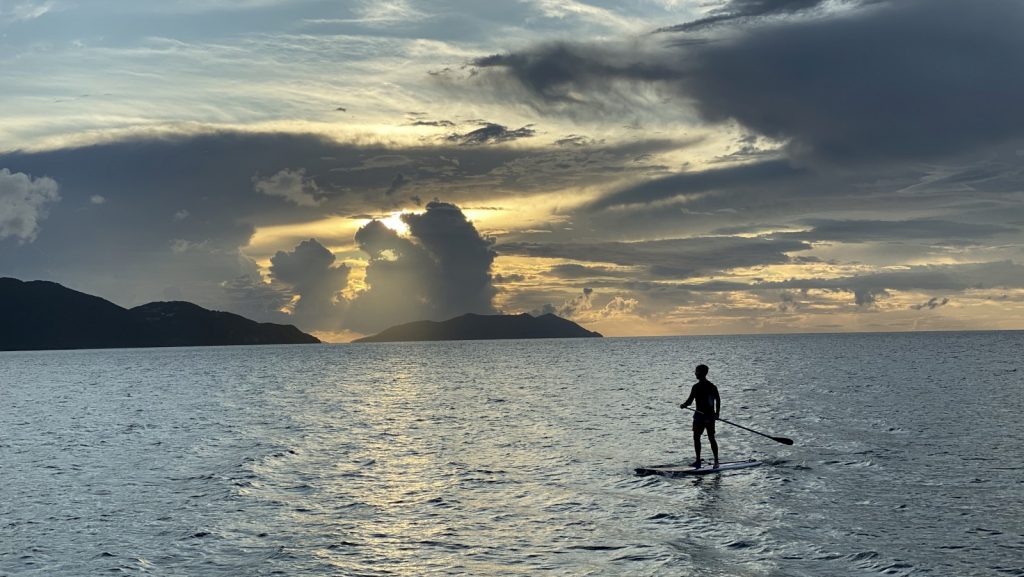 Each day had ample time to relax though boredom was never a problem with warm, clear waters – full of color fish – just a few steps away. The sun kept much of the activities toned down and water based. It was hot… so hot, and there was usually only a few square feet of shade in the cockpit to hide from the angry ball in the sky. Much of the daylight hours were spent slathering each other with copious amounts of sunscreen. Even I found myself starting to burn by only the second day, and I only burn in the most extreme sunny conditions after very long exposure. Kerri, on the other hand, burns from a full moon so when she ended the week without a hospital visit – and two empty bottles of sunscreen (so large we were forced to check a bag on the airlines) – we knew we won. Taras got the worst of it, with a badly burned back in the final days of the week, after only a single day of letting his guard down on the slathering. A lesson, I hear, he learns every time he spends time in the sun. 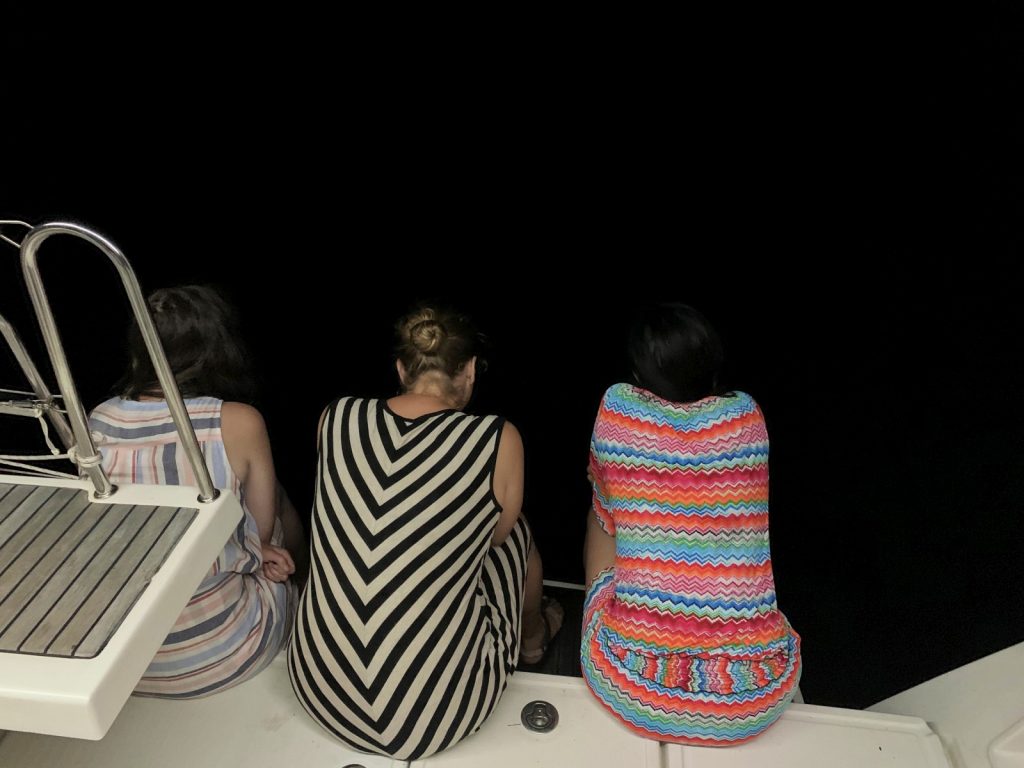 Bio-luminescent fish made an appearance one night. The girls partook 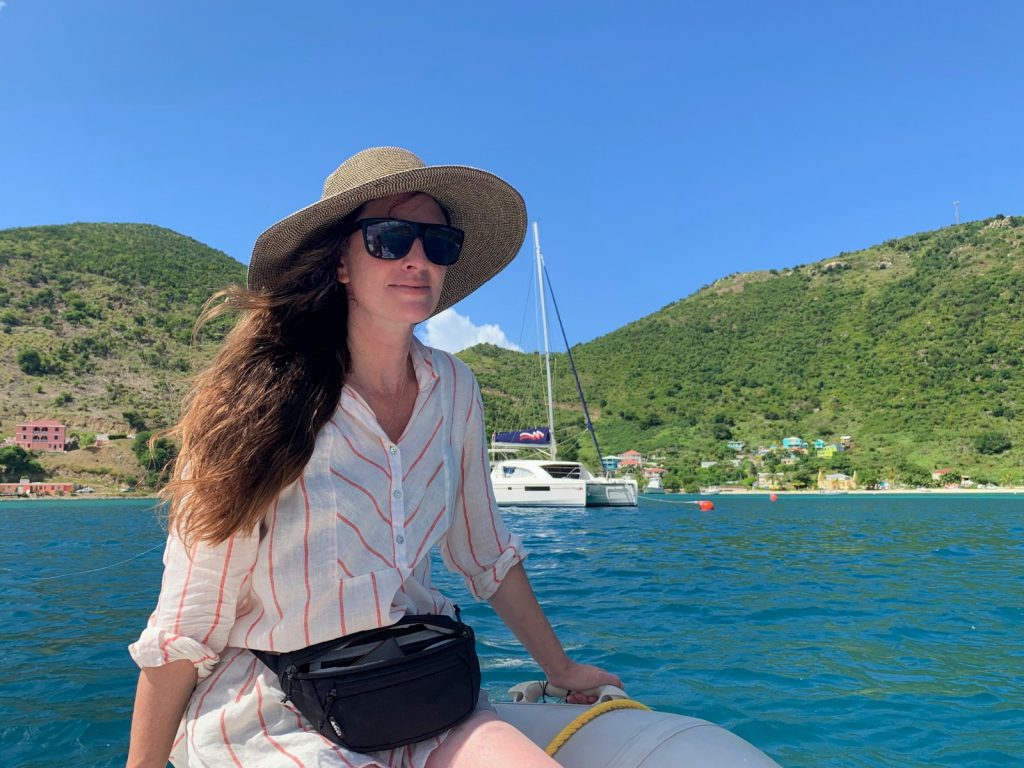