Off to the British Virgin Islands

Even those fortunate enough to live a nomadic life, like us, need a vacation from the daily grind. An extreme change of scenery and days without the normal work schedule to refresh the soul from time to time – right? When a plan to charter a boat in the BVIs for a week was plopped in our lap we went for it. There was a need for another boat, and skipper, so we were called upon to fill in. This allowed seven couples – most of whom we know from our RV days – to spread across two boats for a week of playing in the sun in the British Virgin Islands. 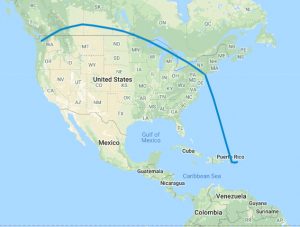 Kerri and I were silly enough to stack all the traveling to get to the BVIs into a single day, making it completely miserable. In hindsight we should have spread the 18 hours of flying and ferry rides across two days, with an overnight stay in New York or Florida. Nevertheless, after much misery Kerri and I arrived to the island of Tortola where we met up with Seth and Drea who we last saw back in 2017 for a kayaking trip down the Green River in Utah. Taras and Laura, the third couple on our boat, were already at the resort where our boat was waiting for us. 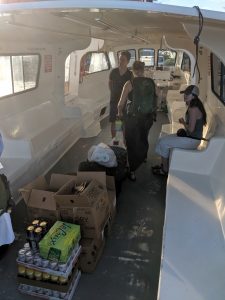 A quick {sarcasm, for sure} trip to the grocery store – in which I sat outside, in the 85 degree heat, guarding all our luggage for 90 minutes – provisioned our party of six for the next week. It was a crazy amount of food and beer, but necessary… especially the beer. A mighty worrisome taxi ride over an extremely steep mountain road (I wasn’t so sure about those brakes) and another 10 minute ferry ride followed. Finally, at 5 PM (28 hours after boarding a plane in Seattle), we had arrived at Scrub Island Resort where our boat awaited. We were met with only a sign taped to the window of our boat welcoming the “Captain Tim” party. We loaded all our supplies and met up with Taras and Laura for the first time, then off to the restaurant at the resort to catch up on not-airport-food. It was no less expensive though.

The boat, a 41 foot Oceanis named “Wymea”, built specifically for charters and weekend sailing, started showing it’s weakness (in my eyes) right away. There was little to no storage for provisions and the organization of said storage was awful. I was already beginning to appreciate Meriwether more. What it did have was a huge cockpit that would comfortably sit six – or more – and three births. It was 6 feet longer (and a couple feet wider) than Meriwether which may have caused a few hours of lost sleep in the weeks leading up to the trip. This boat was all about partying, not crossing an ocean. It’ll do for this week.

A late night urge from Laura for tea prompted a six person, hour long, search for the switch to turn the propane on. We went to bed that night without that tea, but full of worry about our coffee needs in the morning. I did stumble onto the switch first thing in the morning – inside the silverware drawer (!!!). Who thought that was a good place? Seriously! At least we got to have hot coffee. 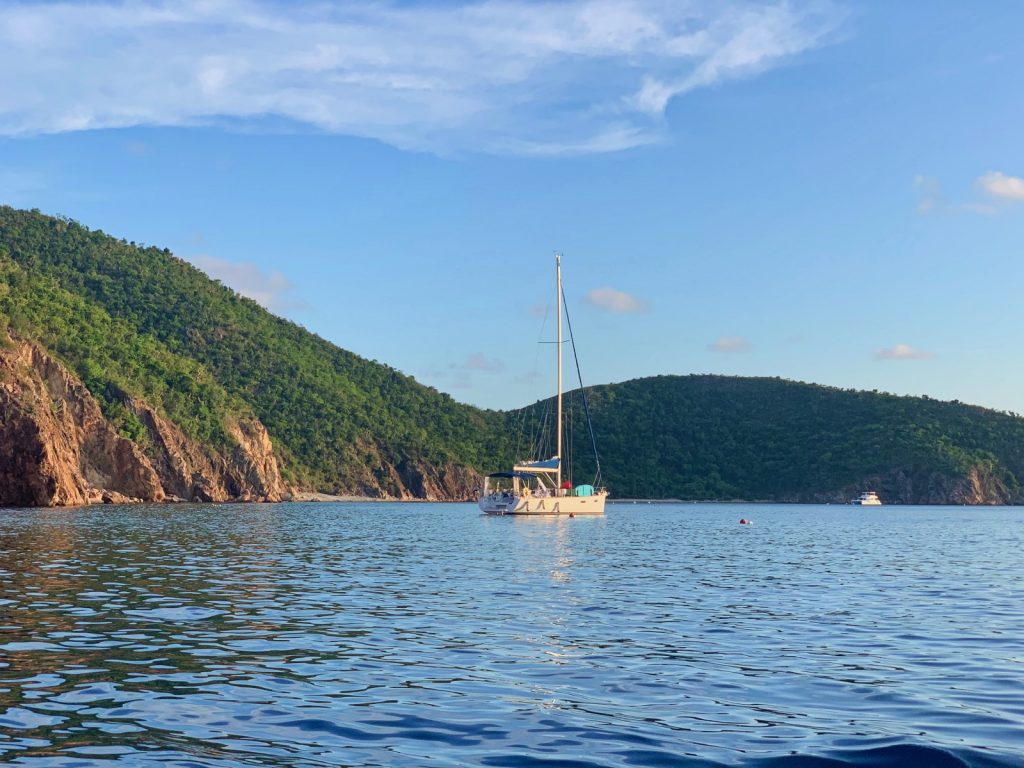 Our not-so-trusty stead for the week

In the morning, some brief paperwork and walk through with the charter company and we were given the green light to go. I still find it crazy that someone with our level of experience (only a few months of sailing) was given this huge boat for a week, practically no questions asked. Whatever floats your boat 🙂

After a quick safety meeting (that’s right, I embraced that whole Captain’s title) with the crew, we untied from the dock and bumped the throttle forward… and did not move. I pondered the issue, throttled up again, and still no forward movement. Finally I realized that I was pushing the little button that kept the gearbox in neutral, duh! So, no button press, throttle up, and we were off. Just outside the marina we found that the displays on the boat provided neither boat or wind speed, the later of which is most important. I radioed back to base and explained the issue. They were to send out a repair team to our first destination which did arrive and did fix the wind-speed issue. The four sweaty gents were rewarded with many thanks and a cold beer each. 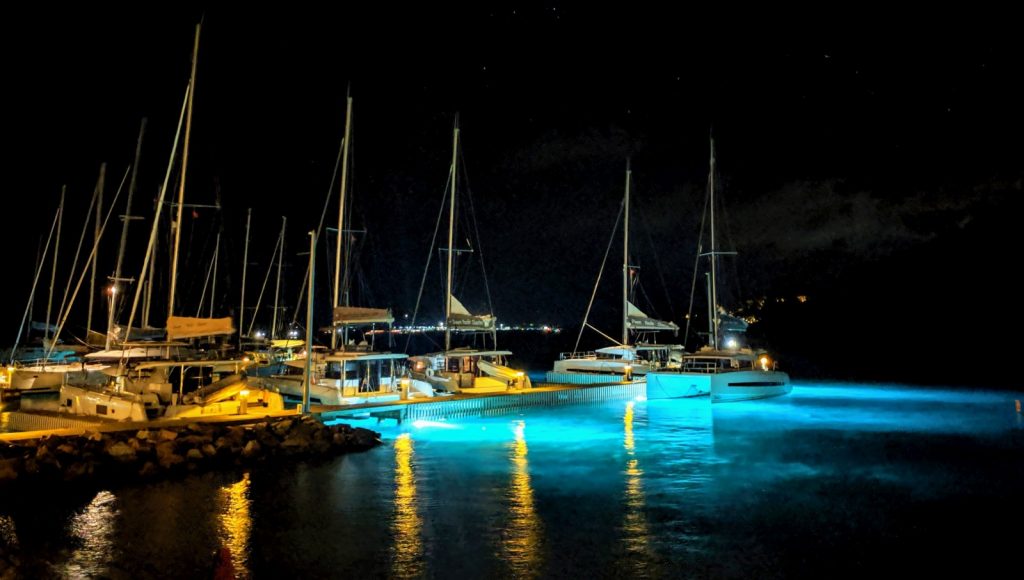 Our first night was spent in the marina

We had only seven miles to sail to get to our first destination, where we would meet up with the other boat of nomads (they launched from a completely different island). As much as we tried during this leg, the curse on Kerri and I followed us to the BVIs – no wind. Only a short time did we get to sail, but that was okay. We were just happy to get this trip started. When we arrived at Deadman’s Bay on Peter Island, the other boat (a Catamaran) was already anchored. We pulled up beside them, dropped our own anchor, and Wymea’s crew immediately abandoned ship. Some swam, some took SUP boards, but within minutes all six of us were onboard the Cat’ to meetup with everyone. The water felt great, and us boys took advantage of the two-level Catamaran to do some high diving in between socializing. The smiles – and booze – were abundant. We finally made it… aaaaahhhh! 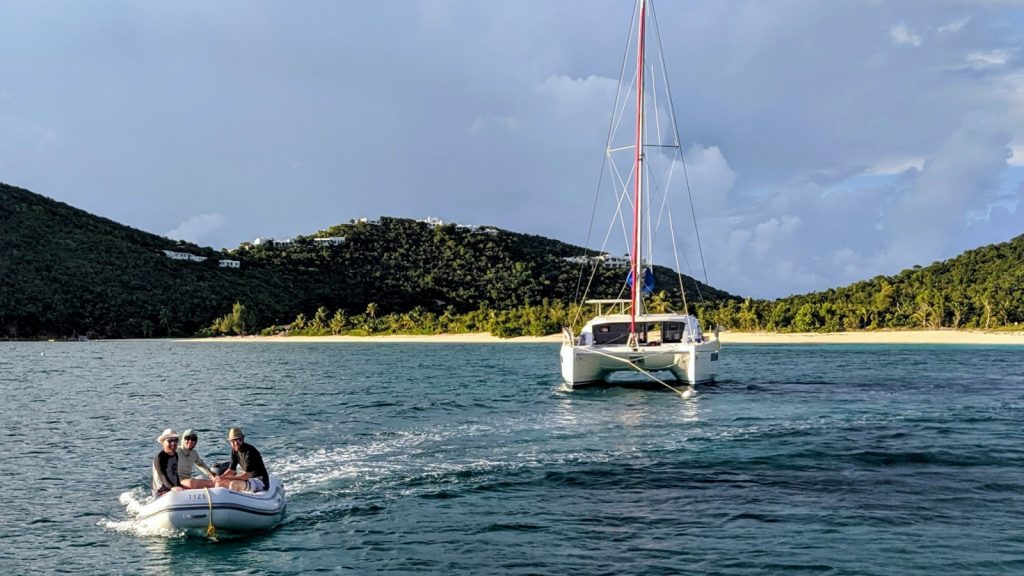