Have I mentioned our solar?

Before leaving Bellingham at the end of May – literally, the day before – we finally got our solar install finished on Meriwether. It took so long as we waited to have a frame built for the panels to be mounted on to. It was something that I was originally going to do myself, but once I started dropping a few brain cells on the task I realized it would be a waste. Not only would it not be as good as if the pros did the job, we would end up having the pros do it soon after anyway because of my shoddy work. Kerri and I agreed, why spend the money twice – right? 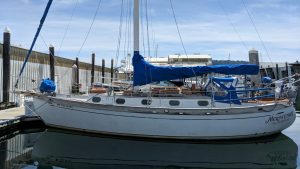 I was able to get a canvas and frame maker in town to squeeze us into their schedule, which was a feat on its own. April and May are extremely busy months for any company in boat repair or maintenance. By the beginning of May, most are booked through the upcoming sailing season, so when we got one to squeeze us in we knew we made the right choice. Still, it didn’t happen easy. There were delays, and wrong parts from vendors, but in the end we got our frame installed just two days before our leave-date, and only two weeks after the promised completion date. 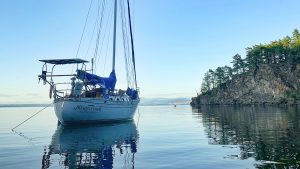 On the day before we left I set about installing the four 100 watt panels onto the frame and wired them, along with the charge controller, to the house battery. This involved drilling a hole through the hull and a lot of crouching in the depths of the lazarette (1) to run the wire to the battery compartment to be married to the controller.

It is a huge whale-tail of stainless steel and magic-crystals hanging off the rear of the boat, somewhat ruining the classic lines of this beautiful girl, but a necessity. All went smoothly with the install, and by the time we motored out of the Bellingham Harbor we had a fully functional solar setup to keep our house battery feeling good. I know that 400 watts doesn’t sound like a lot for those coming from RVs, but it is actually a 33% increase from what we had on the van and the Airstream. We were very accustomed to living off 300 watts of solar for years, so the extra 100 watts is a real treat. At the right angle, we even get a little shade in the cockpit as a bonus.

1 – A lazarette is a compartment below the cockpit seats. Ours also allows access to the rear of the motor, transmission, and bilge area.