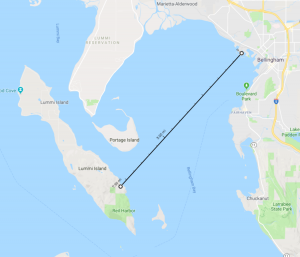 Only a few miles away from our marina in Bellingham is Lummi Island. On Lummi is a small anchorage – Inati Bay – that Kerri and I have wanted to explore for weeks. I’ve mentioned it a few times in previous posts, but we had yet to get out there. This time we were going to do it no matter what, even with the wind giving us the one-finger salute – coming in at depressing 2-4 knots. So we relied on the old Perkins motor with Tim (son, not father) piloting us to there.

Meriwether moves at a fair speed under motor. 6 knots (about 7 mph) is enough to make the distance in about an hour. We can go faster under sail of course, but the wind is also normally coming from that exact direction. Meriwether can’t sail directly into the wind, so we would have had to tack a few times, increasing the distance and negating any speed increase we would get from sailing. So, in the end, an easy time motoring out wasn’t such a bad thing. 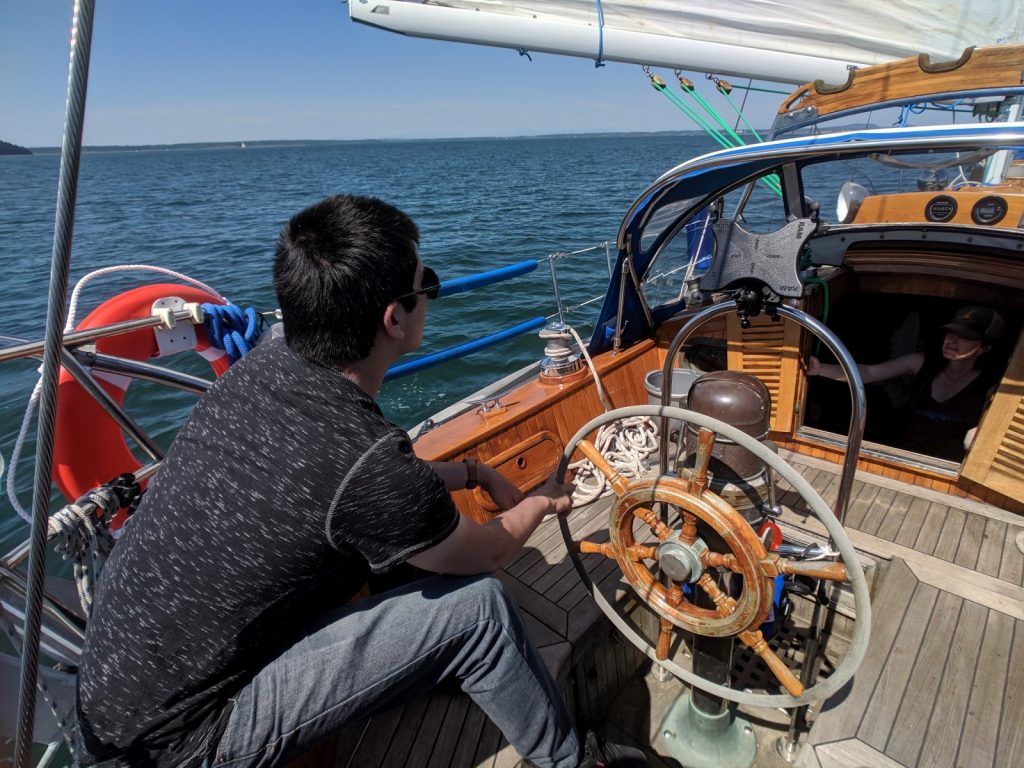 I took over the helm upon arrival to Inati Bay and set about anchoring with both a bow and stern anchor for our first time. I’ve read up on it, even watched some video tutorials, but hadn’t practiced it yet, so this was going to be educational and fun. We gave the two other boats in the bay a wide berth and anchored with our stern facing the shore on the opposite side of the cove of them. All went perfectly, and easily, and next thing we knew we had doused the motor and were enjoying a few hours in the bay. 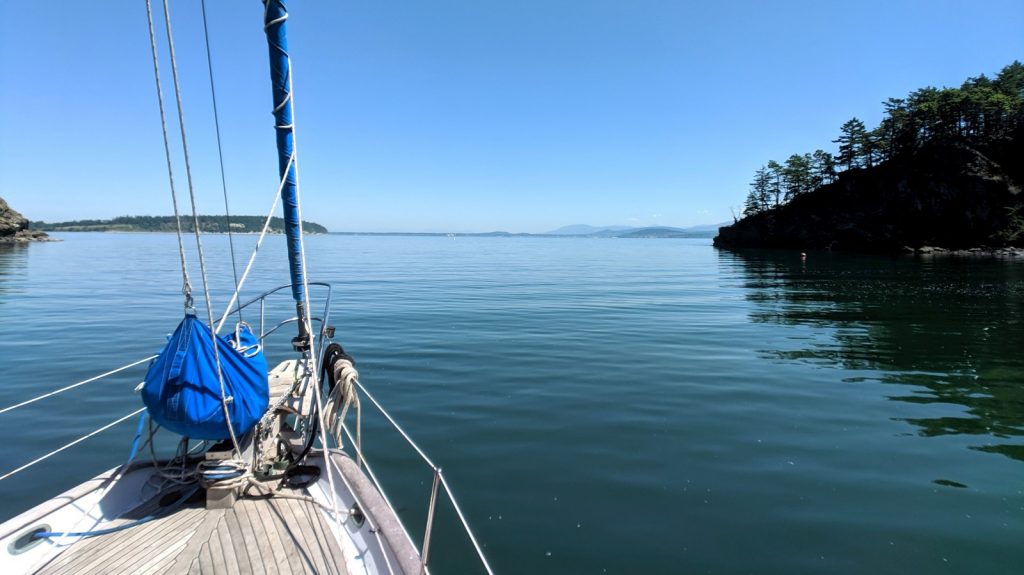 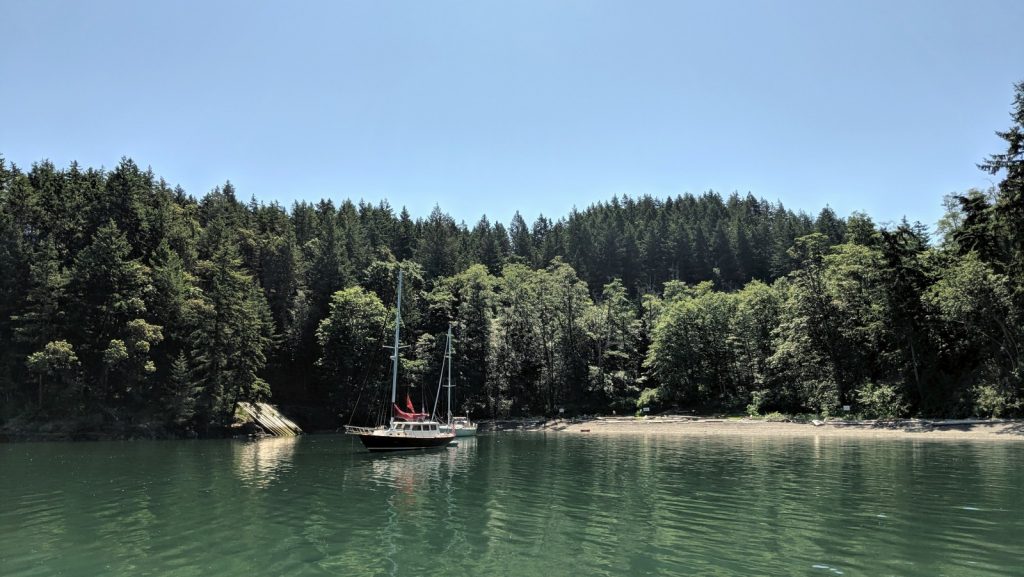 It was only when we anchored that we realized the flaw in our day’s plan – we had not brought our dinghy. Our only thing to do was sit here on the boat and enjoy the scenery. The shore, and it’s trees, looked so inviting yet we could not get there. Begrudgingly, we took the time to just sit back and relax (not a regular occurrence since we started sailing) while Tim (son version again) brought out the drone for some more footage. Kerri and I both joked that we would never forget the dinghy again, knowing that we simply could not – we would be full-time sailors as of the next weekend. 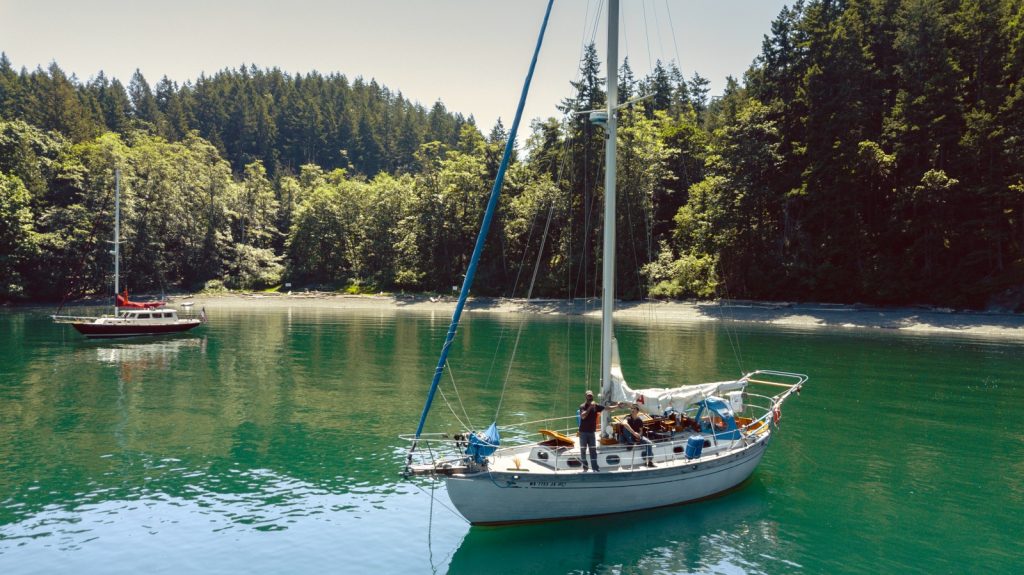 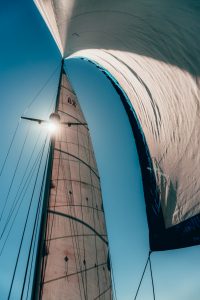 We did get a short distance of sailing in on the way back, but the wind speeds were still too low to fill the sails for long. We eventually fired up the old Perkins again to get us back to the marina. And with it being the end of Memorial Day weekend, the traffic coming in was crazy. Some were slow like us, others were coming in much faster. Some were pleasure crafts and others were fishing boats… just a lot going on. In all our past times returning to port we have not had any traffic, but now there were dozens of boats within a half mile radius, and we are still trying to keep track of who has the right of way at times. In the end, all went smoothly, but my neck will need a breather after all that back and forth trying to keep track of everything going on out there.

After this day there would be only four more days before we leave land for good. We still have a huge list of tasks to accomplish before then including selling the truck, installing our solar system, and dozens of smaller tasks. The excitement level is high and the fear levels get much lower each day. After Inati Bay, Kerri and I are seriously in the mood to get gunkholing as soon as possible. We are even considering coming straight out to Inati for our shakedown week. At least we would only be an hour from resources while having a beautiful little cove to start our new adventures in.

This will be my last post in this “In the beginning” chapter. We will be starting a whole new chapter as we head into the Puget Sound full time.