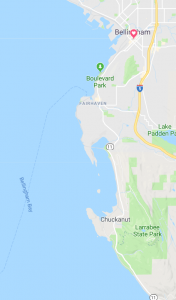 Following last week’s rough docking we really needed a confidence booster, so we took Meriwether out once again – getting back on the horse and all. I had rebuilt the winch that was not working properly during our last sail and were both anxious to try it out as well. Our route was basically the same triangle path with a reverse variant depending on the wind, once we got out on the water. We would either explore Chuckanut Bay or a small anchorage on Lummi Island. The weather was going to be nearly identical, but this time we were planning ahead for the afternoon increase in wind. For those in the know, we would reef the sail down one point once the winds exceeded 15 knots. In layman’s terms – we would reduce some of the sail so there is less sail area and in turn the boat leans over less.

First we had to get out of our slip and into the bay. It was during these times that Kerri and I were realizing was that we just could not communicate well once we were more than a few feet from each other. The wind, birds, VHF radio, engine, and even the water all work against our ability to hear each other. If she is at the front of the boat, she is 30+ feet away and – as luck would have it – always facing away from me. I couldn’t even tell you *if* she was speaking, let alone *what* she was saying. So, we bought some headset radios to allow us to talk during the act of docking, undocking (is that a word?), and anchoring. They proved to be an amazing help and things went very smoothly on our way out.

It was nearly an hour sail in 10-14 knot winds to the South to get to Chuckanut Bay to our south with nothing of note in between. The entrance to the bay has an island right in the center and some rocks – both under and above water – to the north of that island. While it is navigable on the north side of the island, we aren’t there yet and took the longer, yet safer, way into the bay. We effectively passed by the entrance of the bay before turning into it, because that is what the wind wanted. That 15 minute stretch turned out to be our first time going down wind, which is always more comfortable and less noisy then sailing into or broadside to the wind. More of that please! 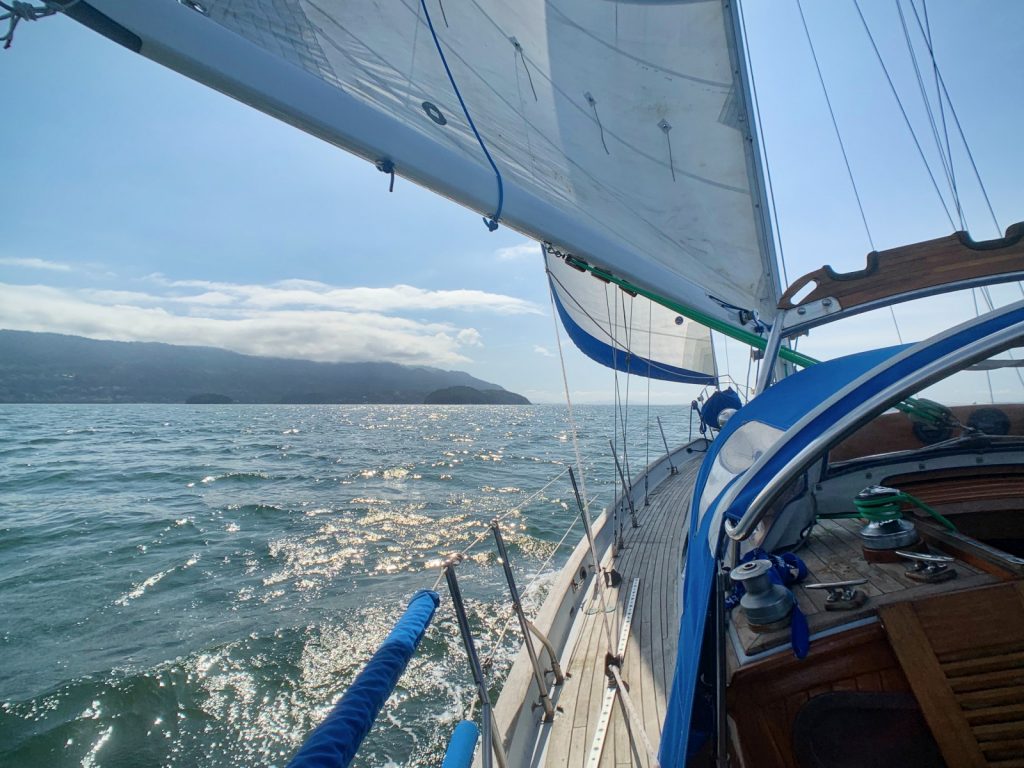 We entered the bay from the South, pointed Meriwether to the North and continued sailing to the anchoring area at the north end of the bay, passing the little island and rocks on our port side. Kerri expressed concern of how little room we would have to maneuver in the bay. If the wind were to change (or die all together) she was afraid we would find ourselves in the rocks or on the beach. I did not share that concern, but to ease some of that stress we turned the motor on to ensure we would have some drive even if the wind died. Once at the north end of the bay we used the fact that the land was now blocking some of the wind to bring all our sails to our first reef point (planning ahead) then took them all the way down. We motored around the bay, sight seeing for a bit, before exiting the same way we entered.

Once we were entering the open waters again we shut down the motor, raised the sails – already reefed if you recall – and started the hour long journey back to Bellingham in 18 knot winds. Our plan was working perfectly! The repaired winch made a huge difference in how physical it was to sail. We knew better when to reef, and even using the terrain to our benefit to make it an easier thing to accomplish. The route we took minimized unnecessary tacking and jibing making our entire sail easier on our bodies. Now this is some good sailing. 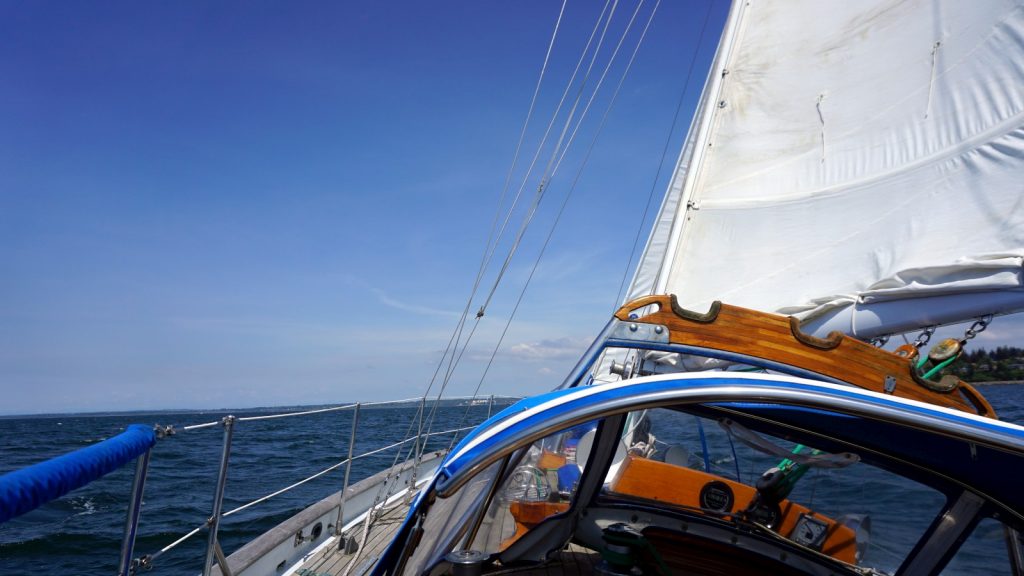 As we approached the marina our headsets were put back on. We were talking through getting the lines and fenders in place well before we got anywhere near our slip, already setting us up for a less stressful entry. The wind was blowing the same way as last week, and at roughly the same speed. Ugh! My heart was pumping and my mouth was dry as we approach our slip. Meriwether would take the 13 knot slap of wind across her bow just as we cleared the enclosed boat storage on our left. This wind would rotate our boat without any rudder input from me. All I had to do was keep the forward/rearward movement stable and slow. The wind hit and the bow started it’s move. Kerri was ready with a dock line in hand while clearly communicating the distances to other boats and the dock. As we approached 45 degrees through the turn, I nudged us into forward gear and tapped the throttle. The bow kept turning as we started moving forward – as planned – avoiding impact with the boat parked beside us and bringing Meriwether right into our own slip. Kerri stepped off with the dock line as I applied a touch of reverse to hold the big girl (the boat, of course) steady while Kerri tied us up. We F-n nailed it! That was pro docking right there and exactly what we both needed after last weekend.

In the end we sailed another 15 miles over the course of four hours or so.We are getting better at our planning, our execution, and our overall sailing. We are exploring new areas that push our envelope just a tick more each day out and we are learning how to maneuver the boat in tight spaces. This is what these early sails are all about; learning and practicing, and it is paying off. And then off to dinner at our favorite happy-hour bar down the road where we congratulated each other a few more times over a cocktail and beer.