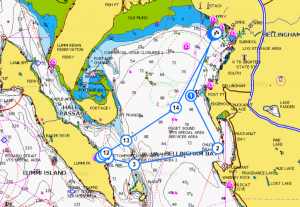 Kerri and I were able to get back out on the water this past weekend, for only our second time on our own boat. I had an eighteen nautical mile sail planned for the day which would take us to an anchorage just to our South and to Lummi Island where we wanted to take a peak at another anchorage. This really just came down to that these are the two things to see in our immediate waters, so we wanted to see them – the nomads that we are. Weather was advertised to be sunny with a calm breeze just under 10 knots from the North West, which worked perfectly with the plan. Easy-peasy! 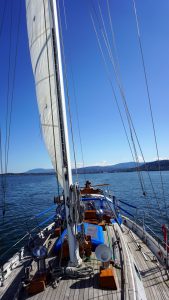 Leaving the slip was made easier with all the backing done the previous time when we returned. It was a simple forward slip departure and we were on our way into the bay. Kerri decided not to take the helm in the marina yet, but did take on the task of raising the main sail once we got out into open waters. That tasks does get easier with each time we do it, but it is a job that requires brute force. Thankfully, our main winch was fixed (it sucks having a man around huh?) so the whole ordeal was not overly difficult. Once we had propulsion from the wind we turned the boat to the South-West, cut off the motor, and opened up our jib. The winds were only at 6 knots, so we were not going anywhere fast. 3-4 knots of speed is all we could muster, but that was okay in my book. 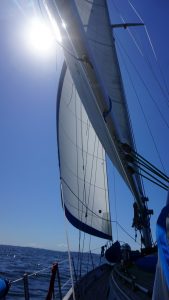 Eventually we turned to the South East to work our way towards Chukanut Bay. We only wanted to do a drive by of the bay, just to see what it looked like. It has anchoring areas in the bay, making it high on the list to practice our anchoring. However, there is a small island and some rocks at the entrance of the bay, which is the primary reason we chose the drive by instead of poking our heads in. We will tackle that whole rock-dodging in future weeks, not this day. As we approached the wind-gods starting toying with us. The wind died off to just a butterfly-fart and was changing directions to out no sail zone no matter which direction we turned. Eventually we grew tired of it all, fired up the diesel motor for a few minutes and found the wind again just a few hundred yards further away from land. 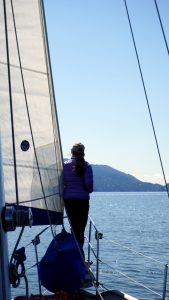 Not only did we find the wind, but the wind picked up it’s pace decidedly. First up to a stiff 15 knots, then 18, 19, and even gusted to 20 knots. Now, this is where our inexperienced began to show. We, of course, looked at the weather before going out. None showed anything near this wind speed (about half is all they showed) and even our Windy app was showing the wind was *currently* at 8 knots. But, here in the real world, we had too much sail out for the wind! We discussed reefing the sails (which means we should have done exactly that, exactly then) but we did not. Instead I did all I could to take the easy road and roll in the jib sail a bit, but that failed repeatedly.

Our boat was heeled way over. Fun and exciting for the experienced, but a little on the scary side of things for us noobs. Kerri was a champ though. At the helm with her Captain Morgan’s pose to keep her balance she was all smiles sailing at 8 knots boat speed. Moose was sliding off his seat and not too pleased. Eventually we decided to nose into the wind and let the jib luff so it could be fully rolled in. We sailed home on the main sail only, not making it out to the Lummi Island anchorage, still cranking out 6+ knots of speed. 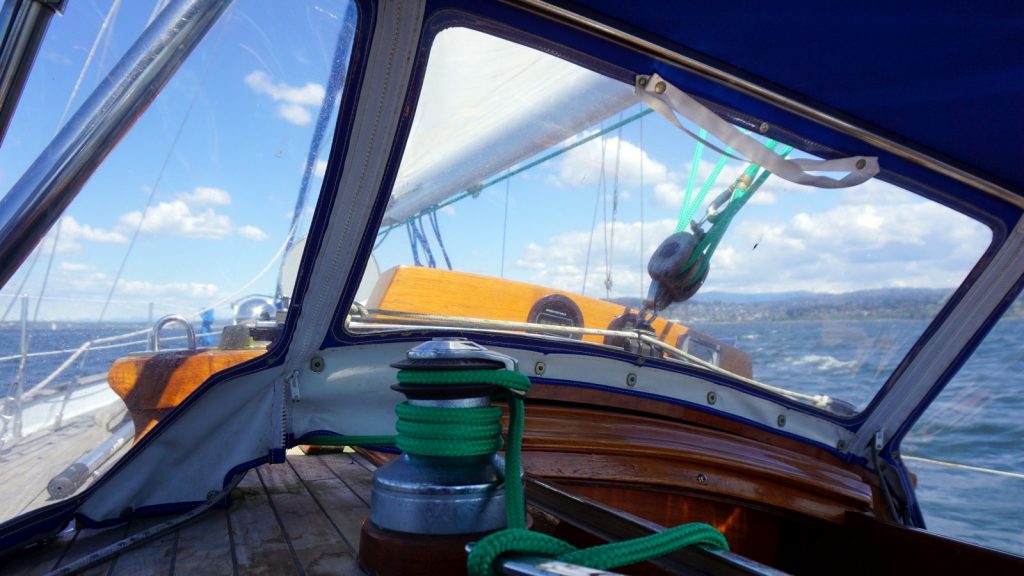 We returned to the marina, dropped the last sail, and prepped for pulling into our slip this time. Making sure the fenders and dock lines were ready to go made me feel confident we would nail it this time. I was even going to take the easier approach – nose in. The problem was that the wind was still blowing hard, and blowing right down the arm of the marina I was trying to bring our boat to dock. During the first attempt, the wind caught the bow and rotated this boat so fast that I was going to slam the dock so backed out as quickly as I could. Not quick enough though. We clipped the outboard engine of our neighbor’s (also our broker) boat. It turned out to cause no damage to either of us but it was stressful as all heck. I turned the boat around and tried again. And again. And again… all resulting in more failed attempts to dock.

It was then that one of our neighbors asked if we would like some help – we quickly accepted. He also asked if we would like some advice – we quickly accepted again. With his advice and help, the boat was slipped on the next attempt. The problem was simple; I treated the wind as my enemy – trying to fight past it to get into our slip. The solution – and what we were taught in class (but I had forgot in the moment) – was to know what the wind will do and use it to our benefit. Once our neighbor reminded us to do what we were taught (and offered another pair of hands) things got a whole lot easier. While it was a stressful time, we found that – once again – our fellow sailors are quick to help. And they offer that help without judgement. See, even the most experienced sailors need help from time to time. One of the gentlemen that came in to help tie us up this day said he had his worst ever docking earlier in the day too, and he was quite salty.

We would both have a cocktail this night. In the end, we sailed for about 5 hours with just over 15 nautical miles put under our belt. We learned a lot more about our boat, both good and bad. Experience… gaining experience is what this time of our lives is all about. I had originally thought we would head out to sail more the following days, but after this day my fingers and forearms could not take another day of pulling on lines. We took the following day off and tried to relax a bit… and talked to our neighbor/broker about hitting his boat. He laughed and simply said, “it won’t be the last time, don’t worry about it”. 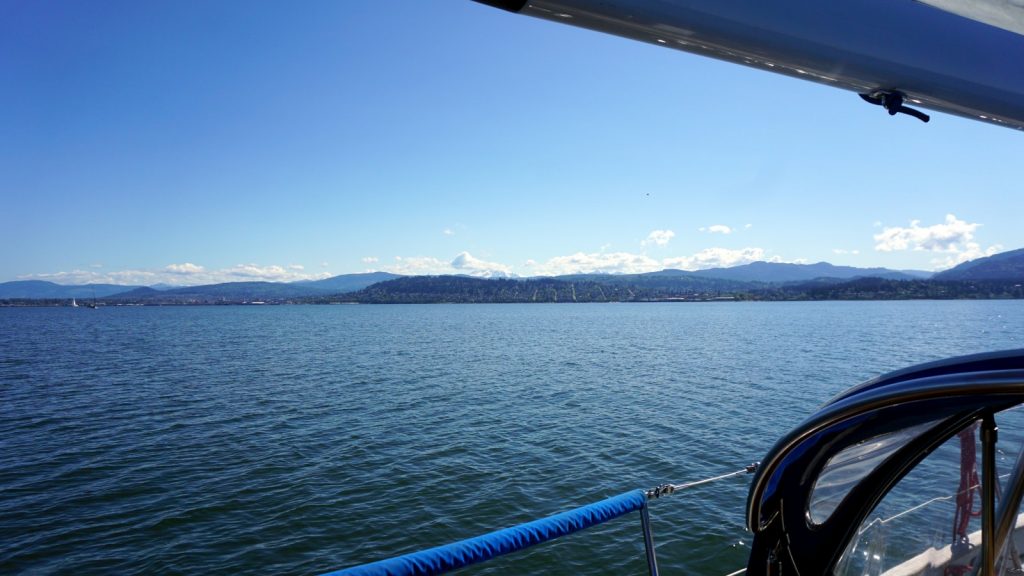