It wasn’t ideal, but we would have to get use too it eventually. Living in the pacific north west means it will rain. A lot. We’ve bee lucky that during this summer it has not rained much at all, but this weekend we had little choice but to sail in not-ideal conditions. To bypass the worst of the weather coming in the afternoon, we left Everett before the sun rose. That is right, Kerri got up before the sun! We even had to turn on the tri-color navigation lights it was still so dark out. The traffic on the Snohomish River – our only way out of Everett – was like rush hour traffic. Fishing boat after fishing boat, all stacked nose to tail on their way out to open waters. 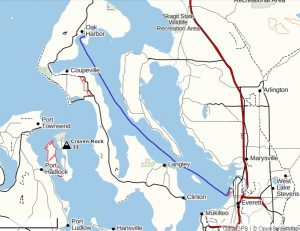 It took 15 minutes to make our way down the river and into Possession Sound where we turned 90 degrees to our starboard (right) to be on our way. From there it was a simple travel route, 26 nautical miles straight up between Whidbey and Camano Islands. Camano brought back memories of just eleven months ago – camped at Camano Island State Park – waiting to officially become boat owners. Less than a year ago, wow. What little we knew then. How little my muscles ached compared to now.

By mid way up to Oak Harbor we did get to raise the sails with a fair breeze from our quarter. Actually, we only pulled the jib sail out for the day. With Kerri at the helm we ran a perfect course to avoid any jibes. The wind would slowly increase as we approached Oak Harbor but the faster it got, the faster we moved away from it. The apparent wind on Meriwether was a calm breeze though the true wind was a little less comfortable. This we were happy about as the drizzle was ever present during the trip. The last thing we wanted to for it to start flying horizontal. We were even visited by a large pod of dolphins (or what ever they may have been) during this stretch. 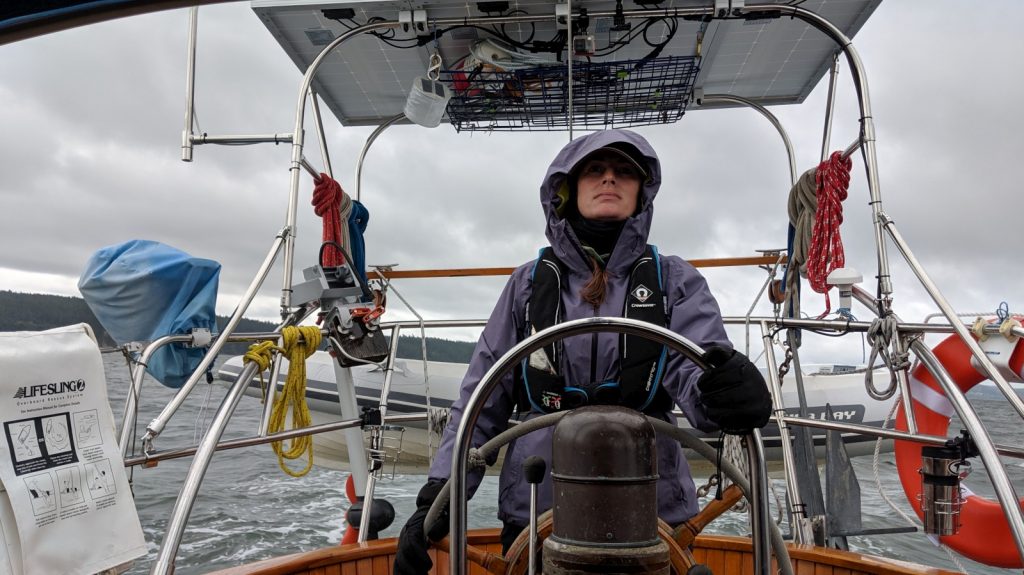 As we approached Oak Harbor Bay the jib was rolled in and the motor turned back on. It was a tight channel through the bay to the marina and the tide was out, leaving some very shallow spots for us to navigate around. The wind was moving along at a pretty good rate by now, even in the marina itself. There were enough open slips on the guest dock to allow us to choose the one we thought was the safest to enter, and did just that. Only a minor outburst from Kerri resulted as I approached the dock at an angle she was not comfortable with. We have very different perspectives while docking. Not only are we standing 30 feet away from each other with her at the bow, I actually lose visibility of the dock as Meriwether blocks my view. I just have to trust her when she tells me, “you are going to hit”, I do – even if I do not necessarily agree with her assessment in the moment.

I do have control of the situation and stopped the boat right there in the water, a few feet from the dock. Kerri reassessed, relaxed, and we continued on. A tap of the throttle with a little port-side rudder brought us right too the dock where she gently stepped off and tied us up. This is getting much, much easier as we gain experience. I have become much more assertive with Meriwether; no longer pussy-footing around in the marinas. With forward movement brings rudder-control. The more rudder-control I have the better I can maneuver the 20,000 pounds of boat under me. When I want her to stop, a big burst of reverse does that in just a few feet. I think Kerri is starting to see all of this as well, as there is definitely less panic in her voice during such times. 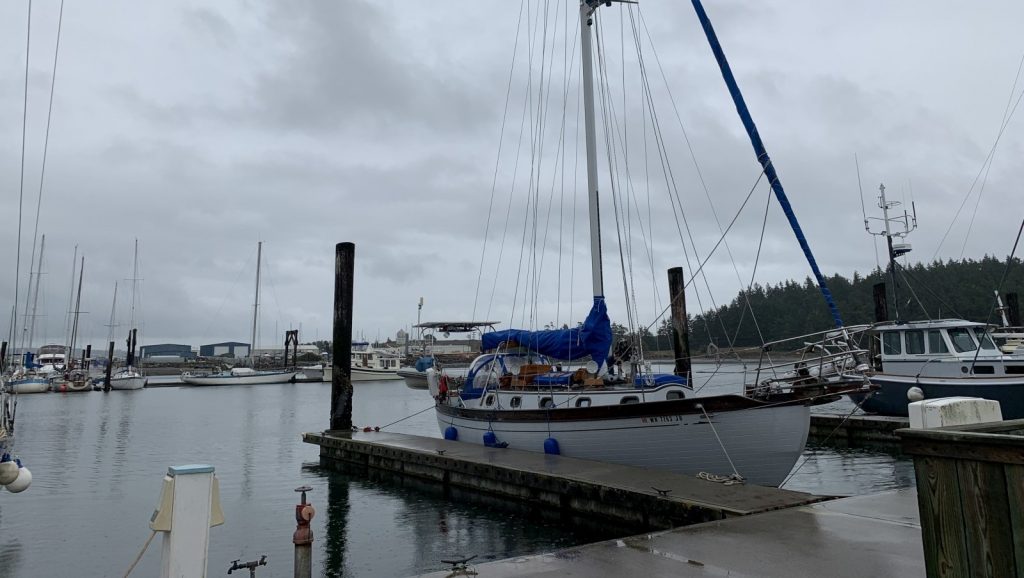 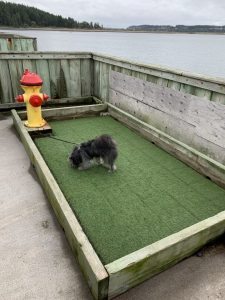 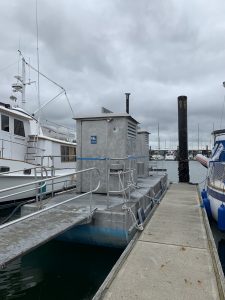 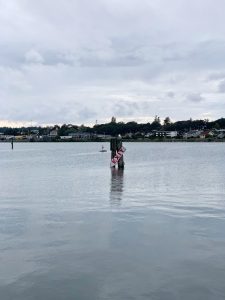 Our time at Oak Harbor was spent mostly working. Kerri plugged away at her laptop, and I tried to take care of as many chores and todo list items as I could… within reason. Now that the list is full of not-so-urgent items, I find myself more willing to put one off for another day or two while I take advantage of shore power (and more laptop time). 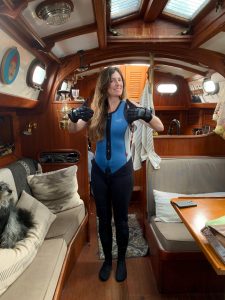 Two things happened of importance during the week. Moose and walked down to the local UPS store to retrieve the couple boxes we had shipped (taking an Uber back). Among other things in said boxes were our new foul-weather gear. Rain would no longer be an issue for us to sail in. And secondly we were re-visited by Brad and Oksana (they dropped in one us back in Everett too) who brought us their now unused wet suits! Now maybe I can convince Kerri to jump in the water for some of those underwater repair jobs. 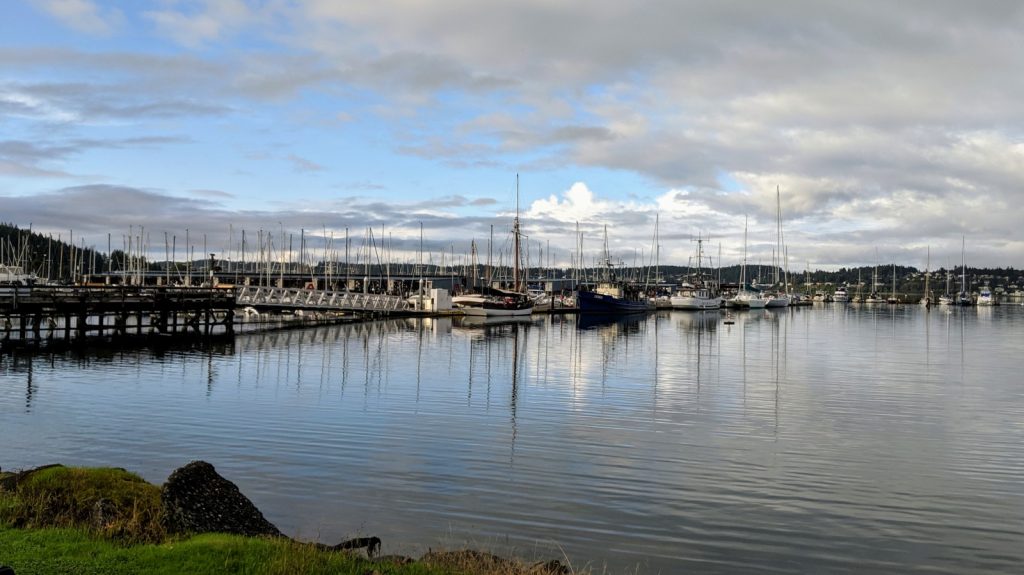