The tales of a resupply trip 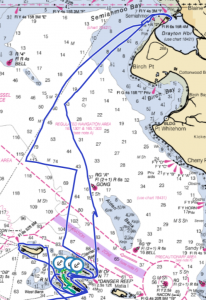 Hey… we finally got to use our sails again. It seemed like forever ago that the wind started conspiring against us by not showing up when scheduled, but this trip would be different. In fact, it was some of the heaviest winds we have sailed in to date at 25+ knots wind speeds. We did take a reef in the main sail and kept the head sail furled in while we made a great down wind run for a fair distance. The swells were high (for us), giving both Kerri and Moose a bit of sickness. Kerri stayed mid-ship (less roll) while I sailed. Eventually, as we jibed (to jibe is to turn through a wind coming from behind us) to the starboard (right) for the last seven miles into Blaine I could open up the head sail and pickup more speed for the last hour. In the end, we pulled off a 20+ mile sail, and downwind finally. It felt good, real good, even if Kerri wasn’t feeling so hot during it all.

We chose Semiahmoo over the Blaine Marina only because we were hoping to get a hold of someone at the Semiahmoo Yacht Club, where we sent in an application (twice) with no response. We paid dearly for that decision as there was no physical clubhouse at the marina, and Blaine was cheaper and closer to the town proper. We ended up having to take a taxi to the grocery store, costing us an additional $50 on top of the nearly $500 grocery bill. We were stocking up a bit – hence the extreme cost – since we paid for a ride both ways.

Five bags of food did not account for all we bought that day. This is my ‘that’s a lota food’ face.

We are refining how to stock up the boat for two weeks worth of food – Kerri approved food, making it that much more difficult. Fresh fruits and veggies do not last two weeks, but with a little planning we can stretch it a tad closer. Cabbage last longer than lettuce. Asparagus last longer than most other veggies. Sweet potatoes last two weeks no problem, so we grab a few for meals late in our two-week voyage. Two quart size containers of half-n-half will keep the second quart fresh longer than the larger container. The same applies to milk which we pickup multiple half-gallon jugs. We even chose to pickup a whole chicken as opposed to just single cuts of meat. It was significantly cheaper per pound and we could cook it a few days into the trip and have multiple meals from that one bird. Plus, Kerri likes the dark and I like the white meat, so no meat goes to waste and we are both happy. All in all, we feel more confident in our food stores each resupply trip.

We fully expected to arrive at the marina with little to no water left in our fresh water tanks, but found that we didn’t even switch to the second tank. Our primary tank (50-60 gallons) lasted us the full two weeks, with another 40 gallons (estimated) in a reserve tank that we didn’t even touch. Heck, we can probably go another two weeks if needed. Remember, we come from the past year in the van where we survived each week on 20-25 gallons of water, and that was with one helluva thirsty dog with us at the time.

There were additional adventures in docking at the marina this time. Easily the most difficult part of sailing, the docking is hit or miss for us still. I planned well ahead with a navigation route to the exact slip we were assigned, but the signage of the marina was extremely poor. In fact, the slip we were assigned had no sign/number so we initially passed it by. Luckily my piloting skills kicked into overdrive and we made the U-turn to get back to our assignment where a couple locals helped us tie up. Two days later though, as we tried to leave, the wind got the better of me again and I fought to get the boat going the correct direction. It took a bit of leg muscles to clear us of the boats across the marina arm as the wind kept pushing us toward them. Meriwether is extremely responsive to even a gentle breeze on the bow, and I need to take that into consideration more. We didn’t hit anything and there was no damage to anything but our ego.

This isn’t a complete conversation about a nomadic lifestyle without talking about poo, so here goes. Up until this day I though our black tank would be the big limitation on how long we can stay out from land. It is, but better than I figured. I pumped out 25 gallons of fresh human waste that Kerri and I deposited in the two weeks since our last pump out, leaving us 20 gallons of additional space in the tank. That means we can go three weeks without much of a concern, and if I use the “outside facilities” as much as possible, we could possibly stretch it to four weeks. Now that is great news!

On the flip side is our normal household trash, which piles up way too fast. We already unpackage all pre-packaged foods at the marina and rid ourselves of all that trash before leaving. We still had more trash than we expected and finding this subject to be the largest challenge of staying out at sea for longer periods.

And once again we got to use the sails on the return trip back to Sucia Island. This time the wind was in our face at a mild speed. We are comfortable with this condition as it has been done many times by us in the recent months. We sailed close-hauled (sails in tight to the boat and the wind at a 45 degree angle to our path) in a direction not all that towards our destination. Just as we were about to sail across a major shipping lane that separates American from Canadian waters (not to fear, it had no traffic at the time) we made a 90 degree turn to the port (left) to complete our first of two scheduled tacks (to tack is to turn through a wind coming from ahead). Unfortunately, the decision to tack before the shipping lane (Kerri’s instance, not mine) ensured we would be forced into a third tack to get to our target. We were going to cross the lane no matter what, but she just didn’t want to do it then for some reason. Not a huge deal, and since we are getting better at tacking, it was a pleasurable maneuver to pull off an extra time or two. After reading up and discussing it further, I think Kerri is less afraid of the shipping lanes and we might do that differently today.

Not that long ago a 20+ mile sail seemed like a long day. We also felt that sailing in 25 knot winds would end in certain death, but now we feel we can handle it with ease. Kerri had been very afraid of an accidental-jibe and how that ends (one of us headless and in the drink) but I think some of that fear (not all, never all) subsided now that she got to do some down wind sailing. As you can see, even Moose is getting more comfortable with this whole sailing thing. Our sailing hours are increasing and the energy it takes to perform the act of sailing is decreasing. Kerri is a lot less stressed out during these times too. In fact, I will admit that she is a better helmsman (helms-person?) than me. Every time she stepped aside and I took over the helm, we dropped 1 knot of speed, and I could never get it back. She takes over and we are faster again. Every time. She has some kinda magic in her I tell ya.