Motoring and a pleasant harbor 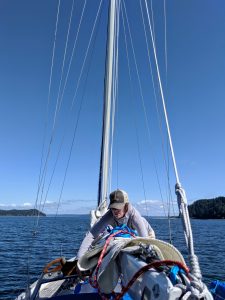 There was only one way to go now – North, back up the Hood Canal. It took us two long days of travel to get all the way down here, and we would have two long ones to make the return voyage. After another stop at Potlatch State Park for a final shower, we were back on the water for a 22 nautical mile back up Hood Canal. At least the wind was not scheduled to blow directly in our face during the trip. In fact, it turned out not to blow much at all, so we motored for seven-plus hours for the day – our longest stretch of motoring to date. We were tempted to raise the main sail once, but it was stacked and packed away again pretty quickly as the wind didn’t justify it up. Good practice in the end. Unfortunately, this long stretch of motoring has put us over 50% of our travel-time on the motor. We really prefer to sail, but we have heard a 50/50 is normal for the Puget Sound where the wind is unable to run free thanks to all the islands and landmasses around. 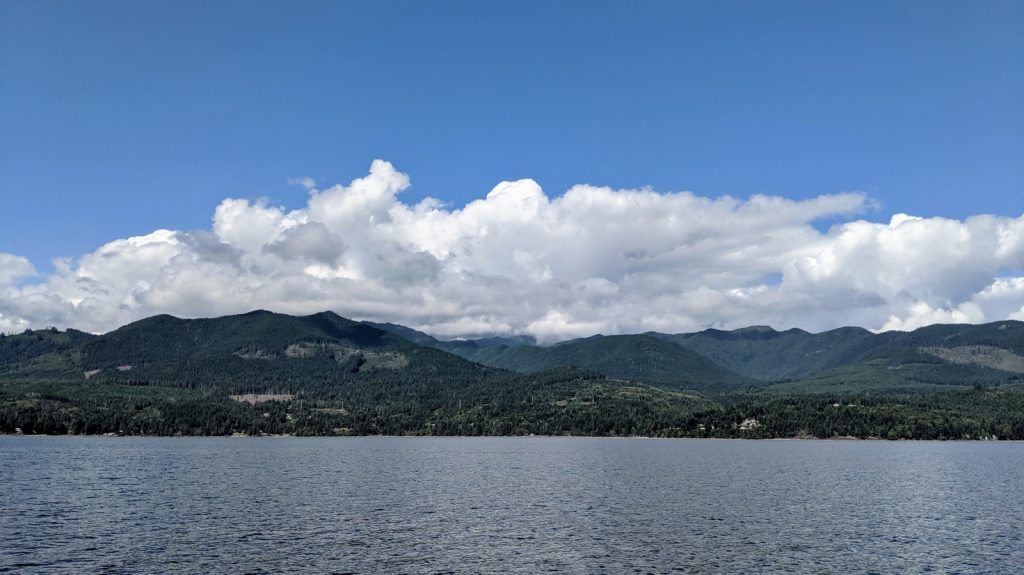 We had scheduled only a single overnight stop at Pleasant Harbor even though it was the most recommended place – everyone brings it up – down the canal. That’s just how we roll. Pleasant Harbor is exactly as it sounds – Pleasant. It is a long oval shaped auditorium for trees and birds to watch us silly humans. Only a single entrance – barely two boat’s width across and only 9 feet deep – permitted us entry from the larger body of water that is the canal. The traffic coming in and out this single lane was heavy (it was Labor Day weekend) and we were both extremely concerned of the depths. Meriwether has a nearly six-foot draft (1), so we had only 3 feet of water between us and running aground. Since we were the biggest thing coming through that moment, I planted Meriwether to run straight down the center of the lane, forcing all the smaller boats to go around and take the risk of grounding themselves. I kept focus, crawling through, and finally came out the other side – into Pleasant Harbor – without any drama at all. 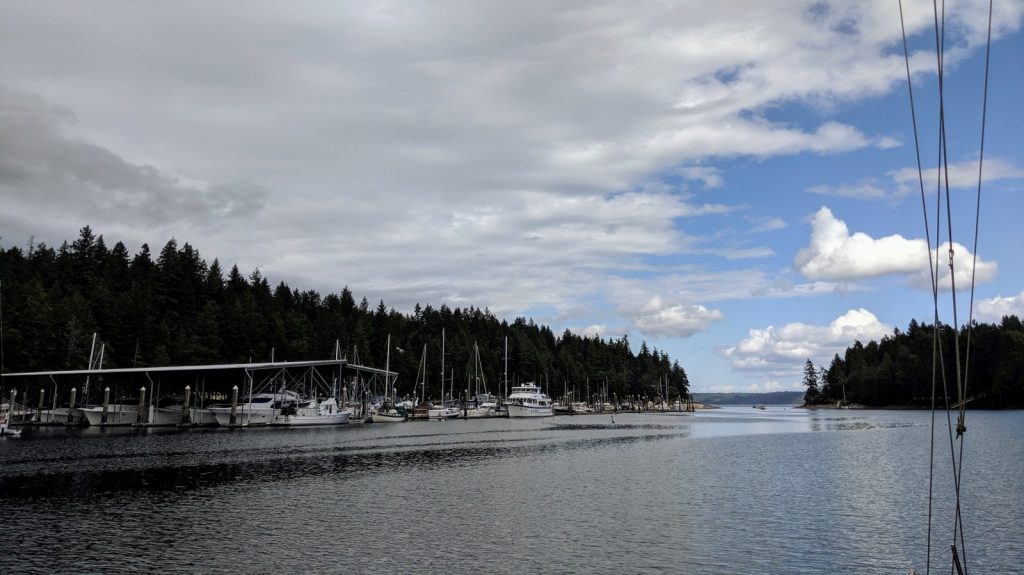 Kerri and I picked a spot to drop anchor for our single night’s stay and did so. It was extremely close to shore to our starboard. If the wind pushed us that direction we might hit bottom, but since we were inside a very well protected harbor, the wind could not push us around, so I opted to stay put with Kerri protesting. It didn’t matter though as once I reversed on the anchor to test it’s hold, it broke free immediately – the first time our anchor failed to hold. We hauled in the anchor, moved away from shore a bit (for Kerri) and dropped the anchor once again. Further from shore this time, we reversed on the anchor and it let go again! Zero for two. We decided to move to a completely different part of the harbor to for our third attempt, and crazy enough it let go of the bottom a third time. What are the chances? This time we did not pull up the anchor, instead opting to let it re-grab on it’s own (which they are designed to do) and settle into the bottom for a few minutes. Only then did we reverse tug, and it all held true. We had found our spot in the harbor… and just in time for a hand made toy sail boat race. 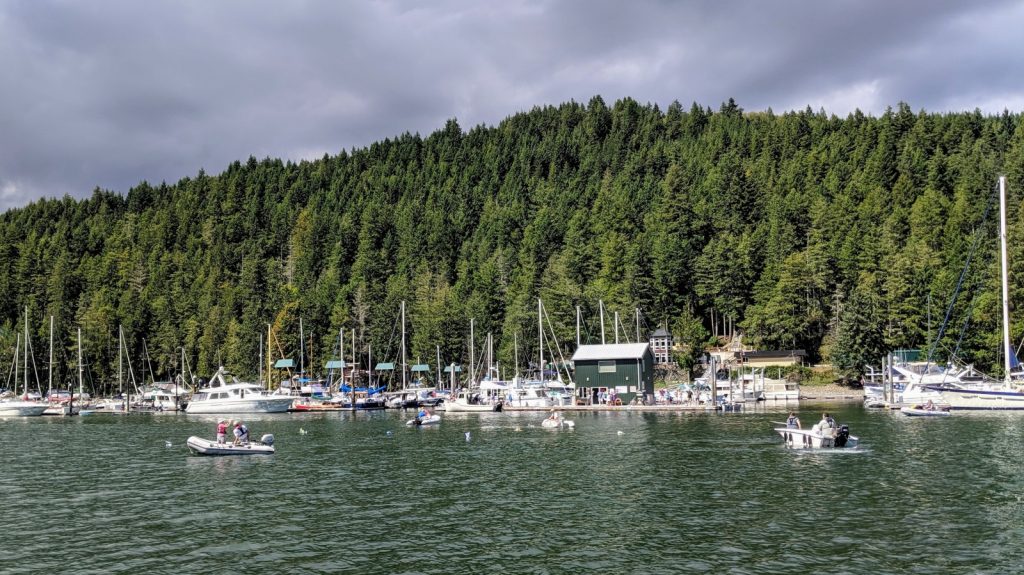 That night we stayed out on the deck of the boat well past sunset. The nearby holiday weekend party went on late into the night. What would normally bother me to no end had the opposite effect here. The beautifully calm waters in the dark reminded me of a long-ago memory of being on the Pirates of the Caribbean ride in Disneyland when I was a child. And here I was, with what sounded like one hell of a party back on shore. I couldn’t help but smile about it all. 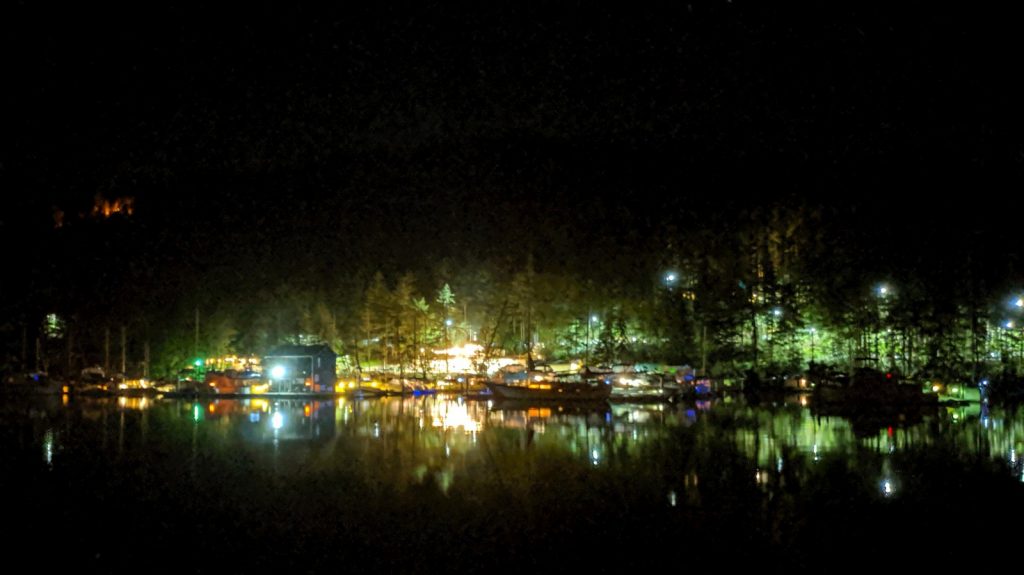 1 – The ‘draft’ of a boat is the deepest part on the boat. On Meriwether that is just over five and a half feet below the water, and that is the shallowest water we can be in before grounding ourselves.