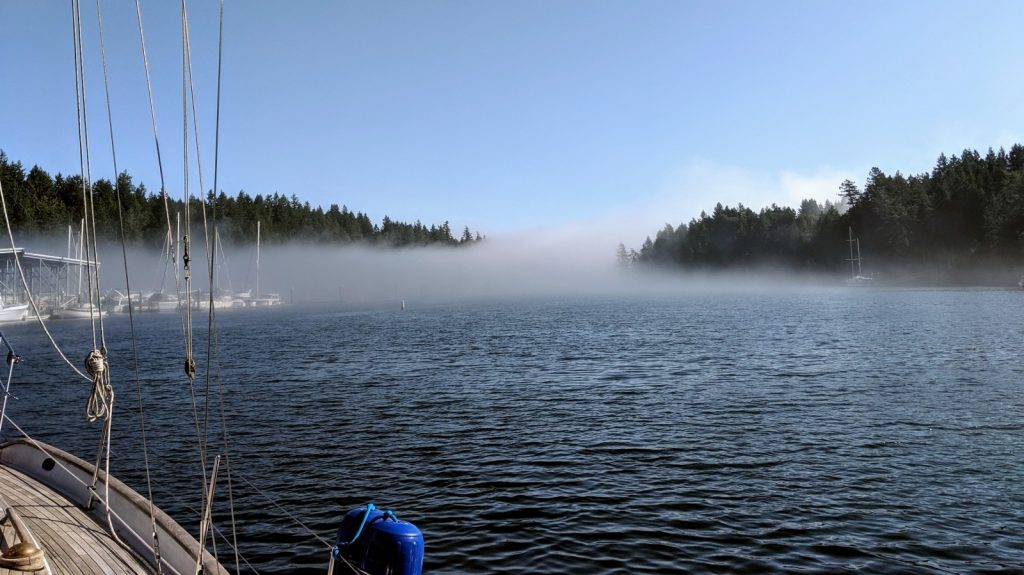 Too early as it turned out. As we exited the channel I was figuring the fog in the larger body of water would thin out a bit, but it did not. We did have a few hundred feet of visibility and were well throttled down so as not to speed into the side of some boat sitting out here, so things were pretty calm – in my eyes anyway. I watched the compass to keep us on course while Kerri sat at the bow of Meriwether, with our trusty bell, and kept a watchful* eye for any objects in the waters ahead. She would have 30 feet more advance notice than I would. That isn’t much when you are at driving speeds, but at the walking speed we were operating at it is a fair amount of time. The fog would thin, then pass all together, over the course of the next half-hour. No big deal!

* Watchful, after a scolding that she could not “watch” the fog line while also watching navigation maps on her phone 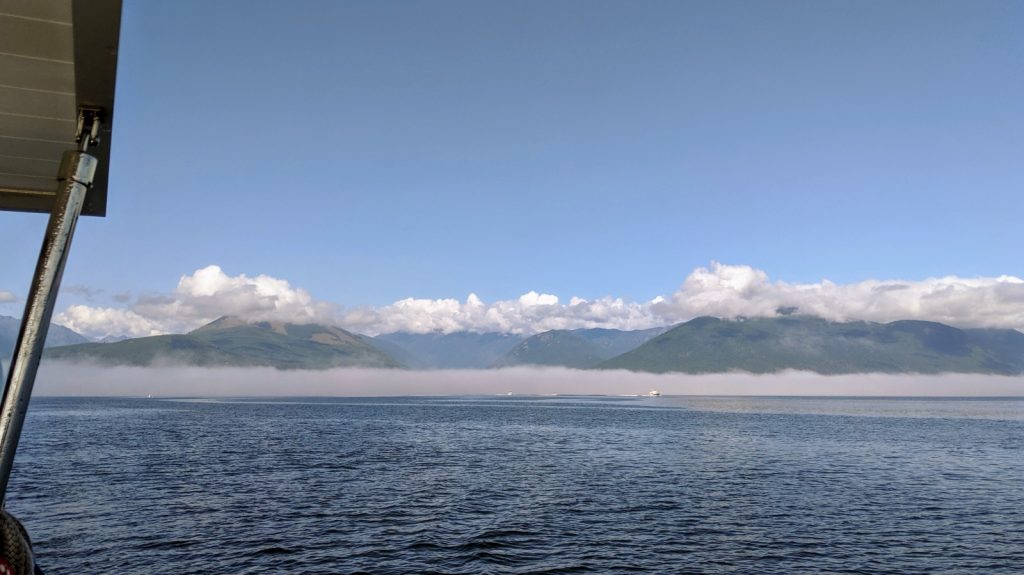 Looking back at Pleasant Harbor you can see all the motor boats starting to stream out of the bank of fog.

Over these past three months, we have been desperately trying to keep our time motoring below our time at sail, but Hood Canal has thoroughly ruined that whole plan. While we had a great sail down the canal, the way back up, while advertised by the weather forecasters as good wind for us, has proven not to be so. Although this day would include some nice wind, it would come directly from our no-sail zone of dead ahead. We would have tacked back and forth up the canal normally, but this portion of the canal skirts right past Naval Base Kitsap where the name of the game is to keep a good distance from their side of the canal. The canal width would be greatly reduced during that stretch, making for an unpleasant number of tacks. We chose instead to motor straight into the wind to quickly slip past the small security boats patrolling the waters outside the base. 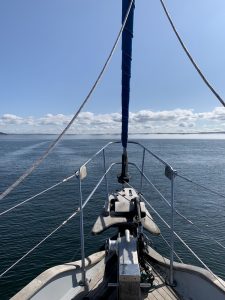 Once past the naval base our next barrier was the Hood Canal Bridge again. Experienced at the whole process now, I called in to inform them of our arrival at 2 o’clock. This was met with a question by the well mannered gentleman who called me by the title of ‘Captain Tim’ (it felt good), “Can you make it by 1:30?”. I assumed it was because they already had an opening scheduled for another boat at that time, but it was impossible to make up a half hour in just the two hours before we arrived. So, “after 2:30 PM” was the next time they could open the bridge. This was fair, as it takes a half-hour for the whole process of opening and re-closing the bridge, and the traffic gets backed up badly during that short time. Imagine if they opened it right back up for us just minutes after closing it… oh the horror. With my newly appointed ‘Captain’ title I boldly accepted the challenge of slowing our speed and arriving at 2:30 PM.

Still about an hour out, my phone rang. I answered, which is pretty rare. It was the bridge operator who quickly demoted me to “Skipper Tim” and informed me that they would be able to open the bridge whenever we arrived. I didn’t bother to throttle up, still planning to arrive at 2:30. At one mile out I radioed to the operator to inform him of our arrival in 15 minutes, knowing it takes them about that long to shut the bridge traffic down and start the opening process. He waited until we were only a few hundred feet out anyway. We pulled up to the bridge and stopped all forward movement in the wind-shadow that the bridge itself created. Bells rang. Whistles… um, whistled. And finally the clanging and chattering began as the bridge began parting. I motored through and as we cleared the bridge, radioed back to the operator with thanks for his service. He answered with a short blow on the horn as we turned towards Port Gamble where we planned to stay the work week. Looking back to the traffic on the bridge, it was easy to feel the scorn from the already miles-long traffic jam we created. Suckas!

With the turn – now facing 90 degrees to the wind – we could have raised our sails, but our final destination was less than 30 minutes away. Lazy, we just kept motoring to and through the channel markers and into Port Gamble Bay. It was easy to spot where the preferred location is for anchoring by the masses as there were numerous boats there. We steered away from it, choosing the other side of the bay to anchor where we would have it all to ourselves. Which we did. For a while. After a successful anchor on our first attempt (yea that’s right, we are pros at this again) another sailboat pulled in beside us an hour later. Not long after that a small tug pulled in on our other side. So much for solitude. 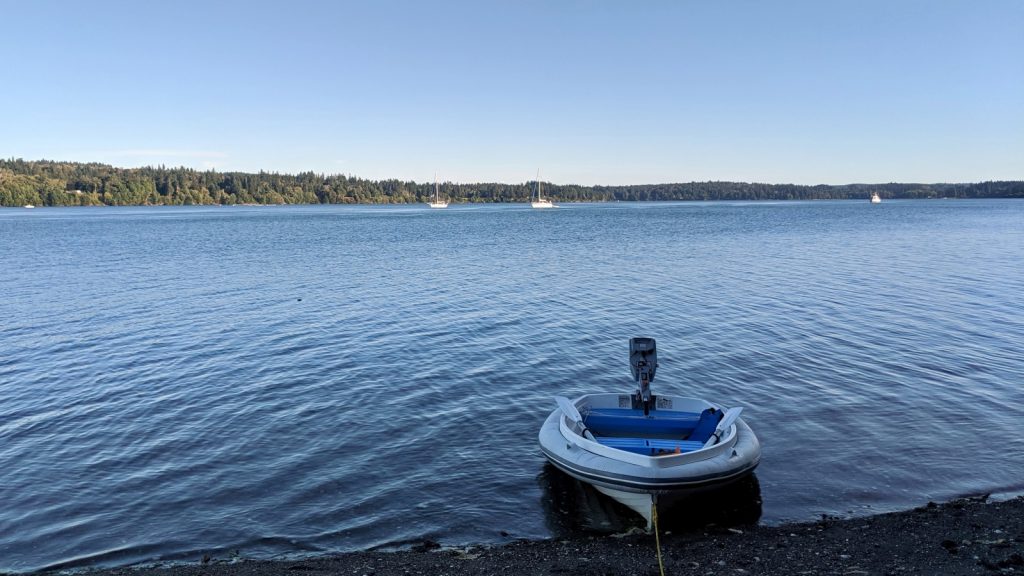