We have been living on the boat for a week now. It is all the time required to start writing internet how-to’s and producing YouTube videos on which is the best way to perform daily tasks while living the #SailLife… am I right? I promise, I will not be doing any such thing. Instead, allow me to tell you the tale of a couple living their first few days on a new-to-them sailboat. 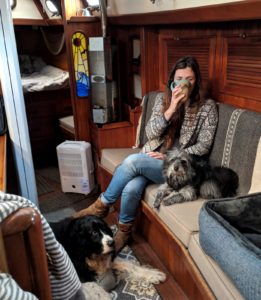 Once we moved aboard we didn’t expect life to change all that much over our current ways from the van. Honestly, it hasn’t… except it has. Now, I know it wasn’t too long ago that I was complaining about having all the luxuries of the Airstream, and just how boring that made daily life for me. Here, on the boat, I have all those luxuries again – a full size bed, a toilet, plumbed water, hot water, etc – and I am diggin’ them. Maybe I have officially entered my elderly years, but something about having a dedicated bed, bathroom, and my own personal lounging space is exactly what I need right now. In my before-Kerri-life, the entire van was all my own. It was more than enough space for a single guy. Add another full sized human as well as her full sized geriatric dog to the floor plan, and things were not so comfortable. The extra space is welcomed. 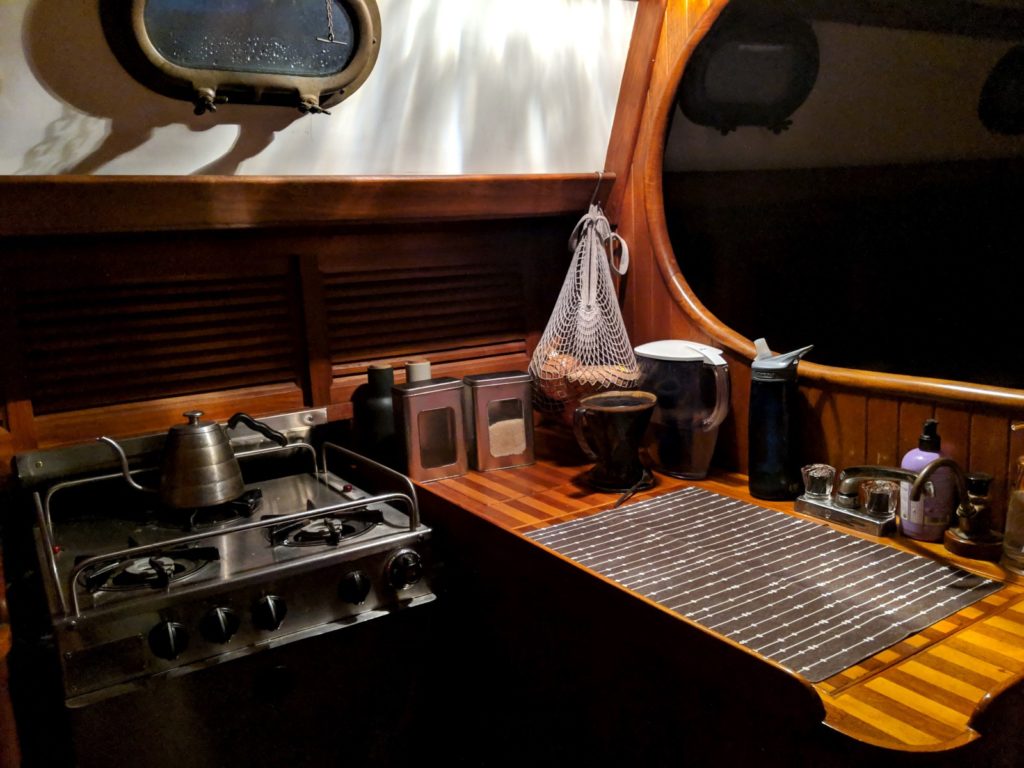 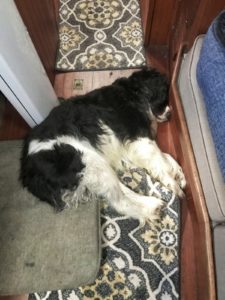 Speaking of the dogs; Moose has taken to the boat a lot better than I thought he might. For a very land based dog, he doesn’t seem to mind that his new home rocks and rolls all the time. He quickly figured out how to climb and descend the very steep stairs to get in and out of the boat on his own. In fact, he takes obvious joy in hanging out with me on deck while I tinker on a project. Byron is a little more difficult. While he too took to the boat immediately – actually quite excited the first hours he came on board – his special needs make it a whole lot more work. He is unable to climb up or down the steps. In fact he is unable to even get on the deck of the boat by his own means. We have to lift him on the deck, into the cockpit, and finally down five feet of near-vertical stairs to get inside the living space of the boat. He doesn’t make it easier as 50+ pounds of flailing limbs and grunting the entire time. He thinks he is helping of course. 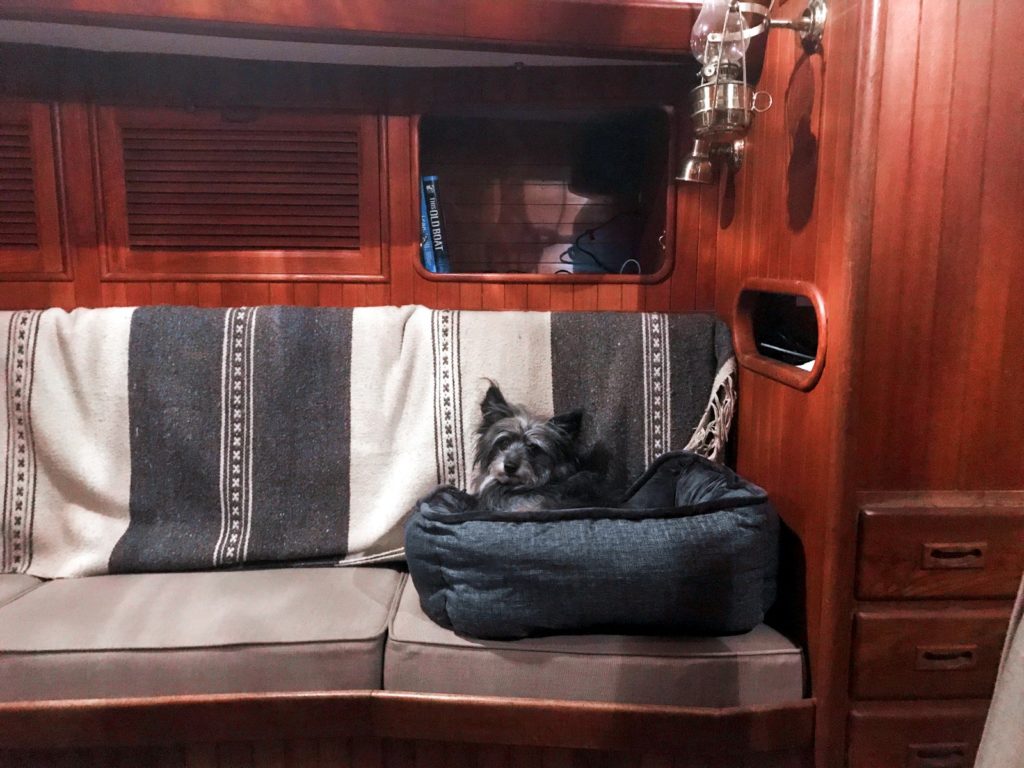 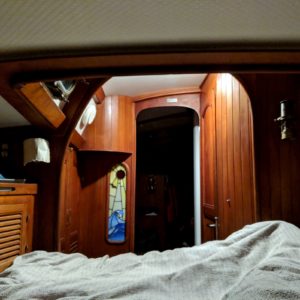 Sleeping has been a mixed bag. Although the bed is much larger than what we are accustomed too, and quite comfortable (now), the cushions were originally too firm. The first night was a toss-n-turn night, then we got a foam topper making it much more enjoyable. Then came our first windy night. The boat rocked back and forth and groaned against the ropes holding us to land. We were both fine with that, but the lines banging against the aluminum mast made a huge bell ringing sound. And the ever present sound of water sloshing under my head as I tried to sleep made me think of this or that leak and the damage it would be causing. Said water turns out to be our very own pee, as the holding tank is right below us while we sleep. Each night things became more normalized and each night I slept better. I worry, in the future, that I may not be able to sleep in the van without it rocking back and forth like the boat.

During the week I took the van off on my own to grab some supplies. It didn’t feel right. I didn’t want to go and leave Kerri behind. I realized then that for the past 10-months Kerri and I have literally not left each other’s side. Since we moved into the van, I have not gone off to run errands while she stayed back at camp to work. When I needed to go into town, she had to come with me since the van was our only vehicle, home, and office. Now we have the ability to go our own ways for hours at a time. It is weird. I’m not sure I like it, but it is there again. 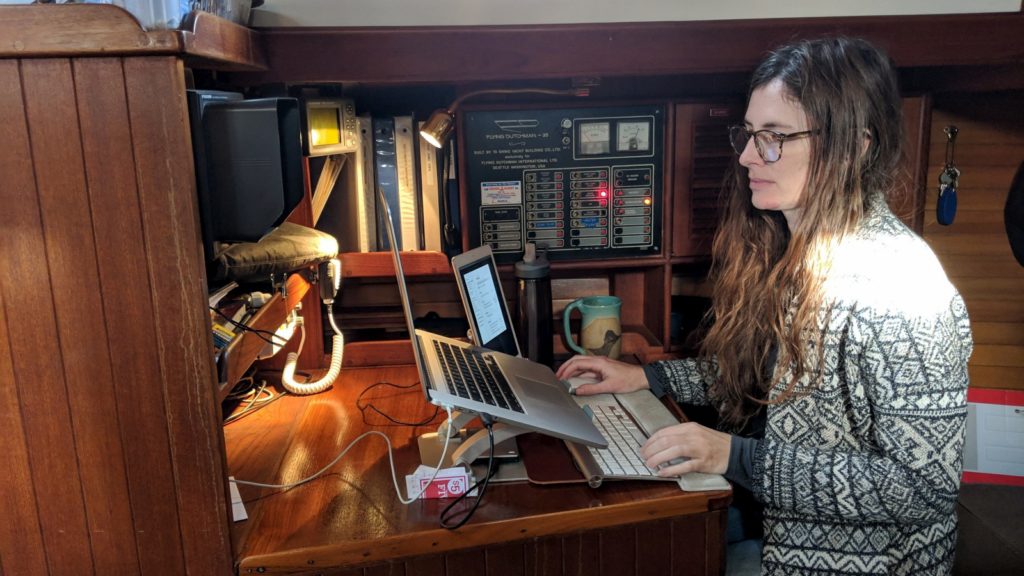 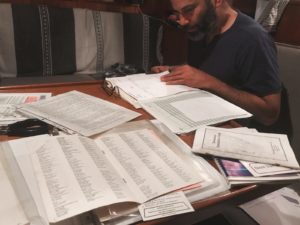 The previous owner (now deceased) was a thorough records keeper. He left us with multiple binders full of his own personal logs, instruction manuals, blueprints and diagrams, and printouts on how to do or repair many items on the boat. It was a gold mine of information that will help us for many years to come. Kerri and I spent one evening sorting through the wealth of information to determine what should be kept. I also sorted through a large bag of spare engine parts, filters, and gaskets to start an inventory of what we have on board before I start on related engine projects.

The locals have been surprising. Literally, they have all had to walk past this boat for sale on the docks for the past few months. It could not be avoided as it was right at the front of the dock. So when the boat moved to a new slip and there were people moving about on it, people started showing up to ask if we bought it. They all speak highly of the Baba. They all share their love for the boat’s appearance and seaworthiness. They all began to share stories of when they first started sailing and of boats of similar design to our Baba. They all have expressed their excitement about us buying this boat and welcome us to the community. They all have given me their slip location just in case we have any questions. They all have been very, very welcoming. 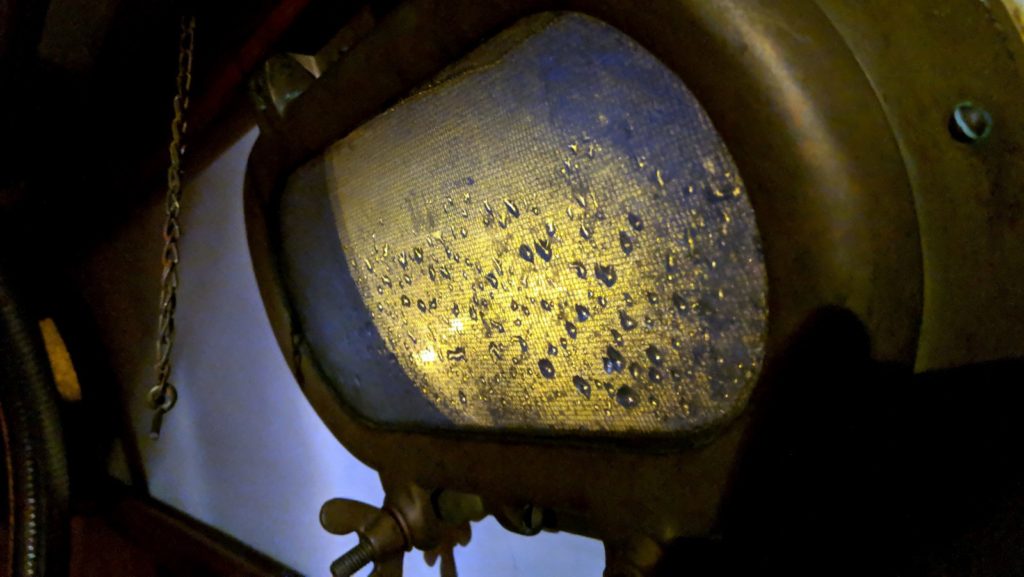 Lastly, I conquered my first repair task; the electric windlass – to pull the anchor up and down – has two foot switches on deck. The survey showed that the down-switch was not functioning. So, on the one day of fair weather we had all week, Moose and I set out to find the issue. In the end it was – or would have been – an easy job. Some simple corrosion was preventing the switch from sending the current to the windlass. But alas, I worked on the wrong switch first, stripping a couple screws in the process. A few trips back and forth to the van to get more and more tools finally allowed me to fix the switch that wasn’t broken to begin with and get to work on the one that was. Sandpaper was all the switch needed, along with a complete new ring of butyl tape to seal it all up, and my first boat fix was complete. The 15 minute job took only two hours but it was still a confidence booster when I stepped on the buttons and the windlass functioned on both directions.

We are feeling a little more salty after a week on the boat. 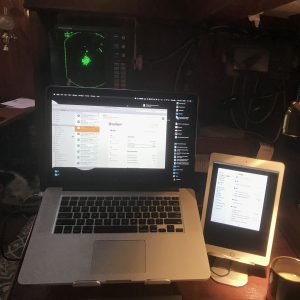 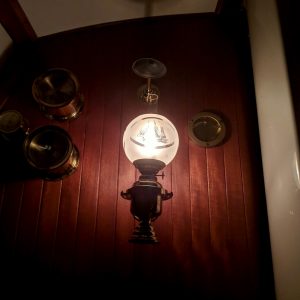 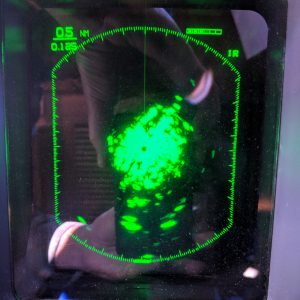 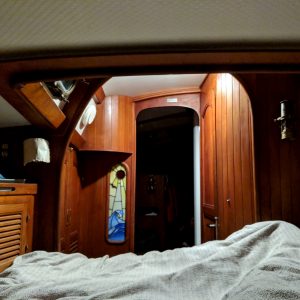 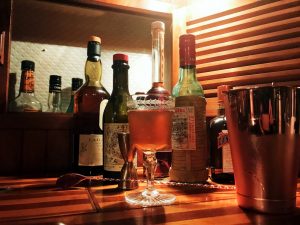 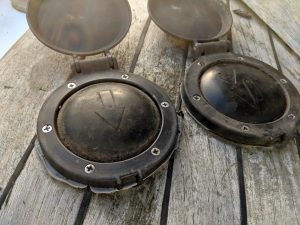 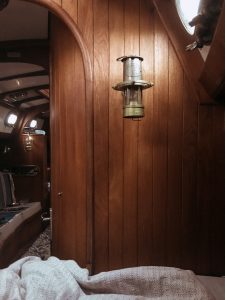