Chains and anchors oh my

In our land based travels we did all that we could to stay away from established RV parks and their crowded and over priced lifestyle. Marinas are the equivalent in the boating world, so obviously we hope to spend most of our time outside of them. What is known as “boondocking” on land is referred to as “gunkholing” on the water. To gunkhole, we need to be able to secure our boat in a fixed location in the water. This, of course, is where anchoring comes into play. 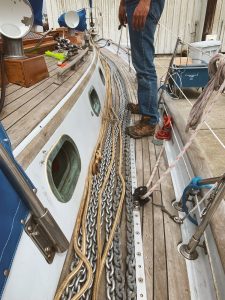 We were preparing to do some anchoring practice in a couple days yet we knew nothing about our anchoring system onboard Meriwether. Sure, we knew we had an anchor, a 35 pound blah-blah-blah, but that was the extent of our knowledge. To resolve the ignorance we began pulling out the entire ‘rode’ (all the chain and rope that holds the anchor to our boat) to learn more. What we found was that half of the chain was incorrectly sized for the windlass gypsy, and that same half was so rusted it would have been very unsafe to have used. We also found that the previous owners used a quite complicated code to their length markings. Chain markings are used so we know how how much rode we have out (aka ‘scope’) which is important to ensure anchor holding. So, we had a couple projects to do before we could set out on our day of practice. 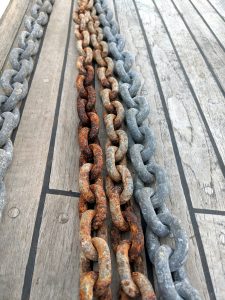 First was to replace the rusted out, and under sized, portion of the anchor chain. Forty of the ninety feet of chain needed to be replaced. It also sounded like an odd number to have – 90 feet – so we were going to round up and added a bit more. More chain equals more holding power, and we always want more power {insert manly-grunt here}. In the end, the rusty portion of our rode was removed and seventy five feet of 3/8 inch chain replaced it bringing us to 125 feet of nice heavy chain.

Secondly, we now had a chain marking system that was complicated *and* wrong after the first 50 feet, so we started from scratch. Changing the code to a simple system of markings at the 25 and 100 foot lengths. This would make it very easy to know how much of our 250 feet of rode has been let out. Now we were ready for some anchoring practice. 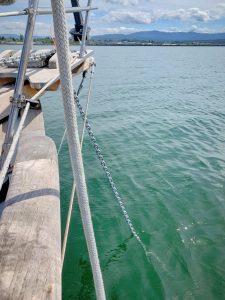 Just outside the marina to the west is a large open area with depths just right for some anchoring. We motored Meriwether out there the following weekend and practiced the act a few times. I went first, with Kerri taking the helm. It was her job to hold the boat steady while I lowered the anchor to the sea floor. She then had to drive the boat backward, slowly, while I let out more rode. This would lay (not pile) 100 feet of chain in the mud. Then she would motor, in reverse, pulling against that chain and anchor combo for a few minutes while we watched to ensure we were not dragging. Finally we got to turn the motor off and enjoy a a snack up on the deck. 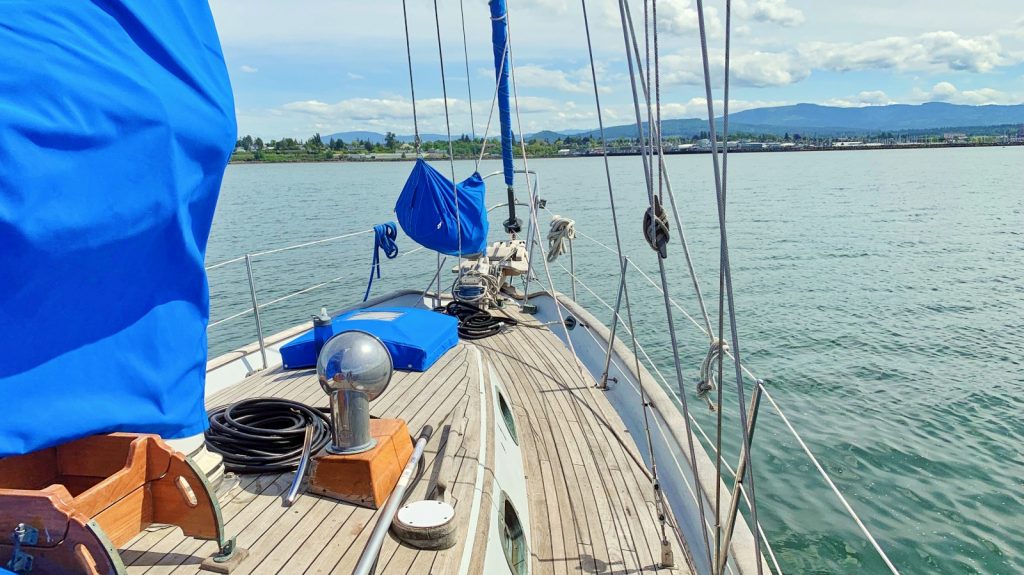 Now this is what sailing is all about. Ironically, for us, it is not about the act of sailing as much as it is about being anchored in some beautiful spot, surrounded by nature. Just like our land based travels were not about the drive, but the destination. It was at this time that Kerri’s excitement level increased, looking forward to our impending sailing adventures. Then we pulled it all up, swapped positions and repeated it once more before motoring back into our slip. The sails were not even raised during our time out. We were both quite pleased with how things went; smoothly. Thanks in part to the new headsets that allow us to clearly communicate on opposite sides of the boat. Even our docking this day went about as smoothly as it could go. No wind really helps in that area.