After our original offer was accepted by the sellers, the next step was to schedule a survey (inspection) and sea-trial (test drive). It was at this point that we realized that the Puget Sound is full of sailboats… many needing surveys. It was a three-week wait to get a survey scheduled, but we did get it scheduled with our top-choice surveyor. And as it turns out, he had inspected this very boat only two years prior, so he would know it better than most. The three week wait was excruciating, but we somehow made it, barely. 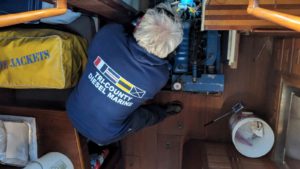 Finally, the big day has come and gone. Survey day, where the boat gets a full inspection inside and out (and the diesel motor too) so we know of any and all issues with it before we move forward with a purchase. We were told to be in attendance for this, not only because we want to be onboard if/when they find anything, but part of the inspection is to take the boat out on the water and raise the sails. It started bright and early at 8:30 with the engine surveyor having already pulled the cover and started his inspection. During this time we could not access the cabin of the boat, so Kerri and I hung out on the deck up top talking with the brokers and just trying to soak things in a bit more. But, for the most part of these early hours it was a whole lot of sitting around while the inspectors did their jobs. 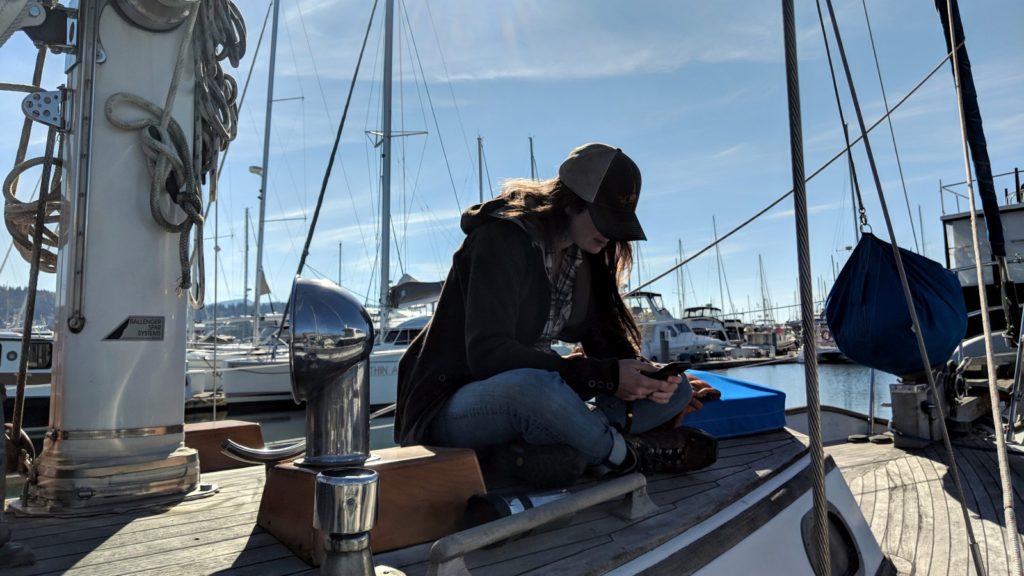 By 10:00 we were taking the boat out on the water – just to run the motor under load for the inspector. It was here, at a full 7.5 knots speed (screaming fast, I swear), that the engine guy found that the alternator was not securely bolted in place. A previous repair job done poorly nearly caused some serious damage. Signs of another half-assed repair became apparent as well; the exhaust system was leaking and allowing a small amount of fumes into the cabin while under way..

We had to return to the marina in pretty quick order to be on time for our scheduled haul-out. A haul out is exactly what it sounds like; pulling the entire boat out of the water. A huge crane (actually the smaller of the two at the marina) cradled the 21,000 pound sailboat in just two straps, lifting it up on to “the hard” so we could thoroughly inspect the hull. While there were no significant issues with the 40 year old hull (it looked great actually) we found other things highlighting previous repairs not done so properly. All minor in the hull-scheme of things (see what I did there?) but we would never have known if it were not for these inspections. 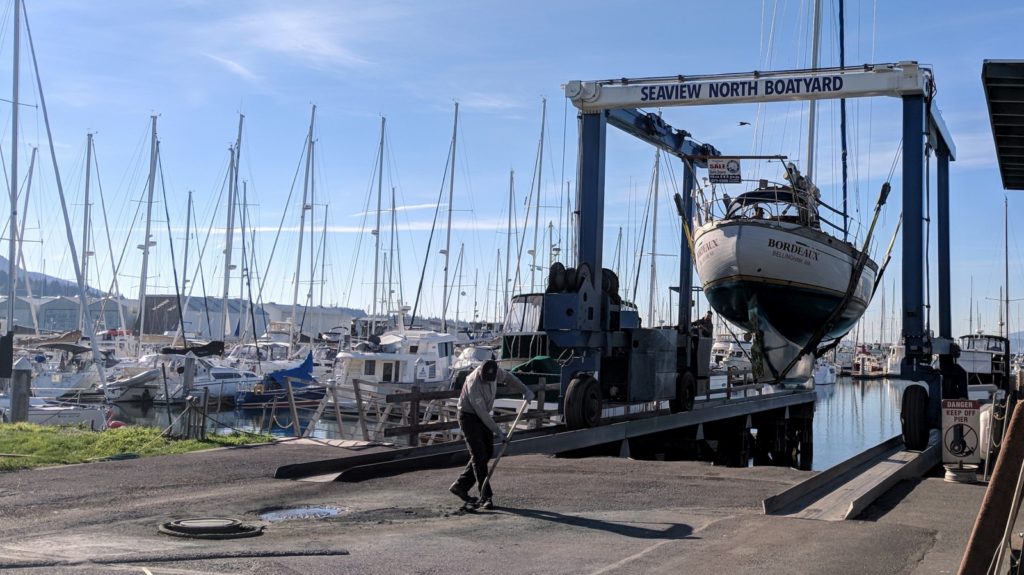 Back in the water by noon – and with the alternator secured properly – we were getting set for the sea-trial (test drive). This is what Kerri and I really wanted to do; to get it out on the water under the wind and lean it over on it’s side a bit. The wind did make an appearance. The sails filled and we accelerated too and maintained the calm speed of 5 knots (6 mph) for most of our time out.  Lots of photographs and smiles among the crew, with no signs of mutiny or pirates on our first ever voyage. The hour or so passed quickly, with both of us taking our turn at the helm (see me using my sailboat terms?). 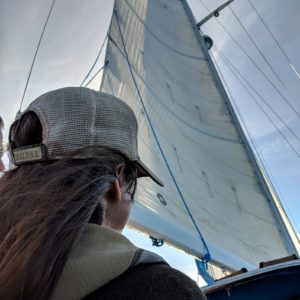 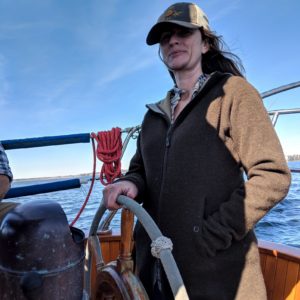 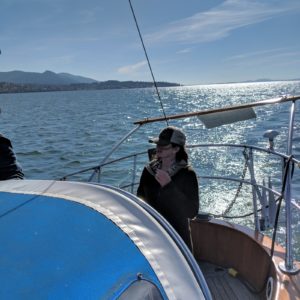 Now, well after lunch and the hunger bug was strong in me, Kerri and I got the dogs out of the van for a quick walk and sat down at the nearest restaurant for a meal. In retrospect, I made the wrong choice with a big greasy bacon-cheese-burger but it sounded good at the time. It was here that a serious case of the yawns arrived. It had been nearly eight hours since our day started. Sure, I wasn’t doing anything difficult or hard, but I will admit that I was excited the entire time. My body doesn’t do 8 hours of excitement anymore. Two… two hours… then I need a nap.

After lunch we returned back to the boat to get the full run-down from Matt, our inspector. He went over every part on the boat that stood out to his as needing some level of attention. There were dozens, of course, but only three stood out as big enough items for us to possibly consider those costs into our next offer. Everything else was fairly minor. In fact, I am quite happy with the size of the list. I’m sure if this guy inspected my 30 year old van he would get a longer list than what he found on this 40 year old boat. Kerri put it perfectly on her Instagram post (because she can IG no matter how tired), “no reason we won’t be finalizing the sale on this boat!”

We still had more than an hour to drive to get to our camp that night. The yawning continued the entire time. By 7:00 in the evening we had already made our bed and slipped ourselves under the blankets. 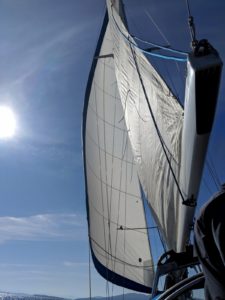 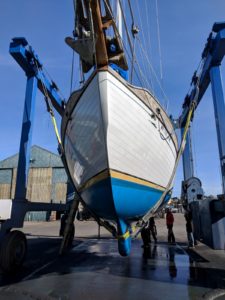 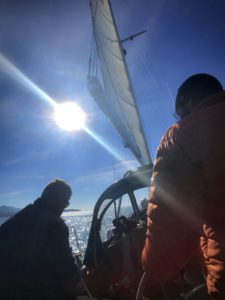 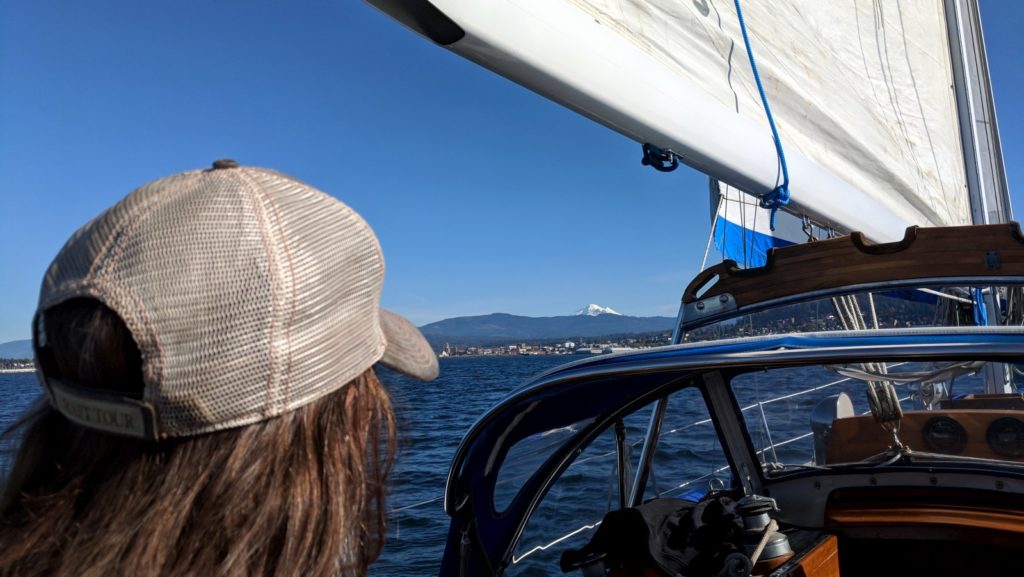