It has been all about the todo list as of late. Just crushing out as many items as we can before our mid-May departure date… did I mention I had a departure date? For every item checked off the list, two more appear. Most are simple enough, but there are a few big tasks; like adding a full solar setup, or installing the wood stove. Since we are still awaiting parts for those bigger projects I got to tackle one that I enjoy… 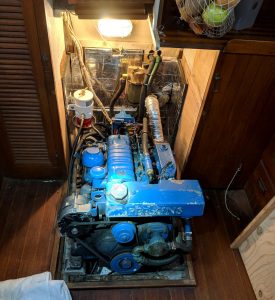 A simple oil change. Sounds easy enough, but it had not dawned on me that one can not simply pull the plug off the bottom of the oil pan, like in a car. There is simply no access to the bottom of the motor on an old sailboat. The only way to get the oil out is to vacuum pump it out. It took a trip to West Marine to get the correct tool, but the oil (and filter) eventually came out, and was replaced. I thoroughly enjoyed the access to the motor once the companion way steps were fully removed. When compared to the access of Big Blue’s motor, it is both easier and more difficult to access at the same time. For the most part, the components that need to be accessed regularly are right there in easy reach. It is a weird sight to see the old motor sitting there in our kitchen, I must say.

Last week I had thought I fixed an exhaust leak that was causing our engine pan to fill with water, but when I returned to working on the motor I found water in the pan again. I was confused as all heck, as I hadn’t run the motor during the time between. So, obviously, there was another source to the water and I found it once I could poke my head around the back side of the greasy beast. It was there that I found a clear plastic tube dropping into that very engine pan. It came from the ice-box! Someone setup the ice-box to drain into the engine pan which is not pumped out by the bilge pumps because it is meant only to collect fluids that should not be pumped overboard. So the icebox water collects until it spills over into the fuel tank area – also not pumped out – and sits there until it eventually evaporates… which is never in the PNW. I pumped out six gallons of water from an area that should be bone dry. Not the first example of half-assed work I have come by since I started working on this old boat. 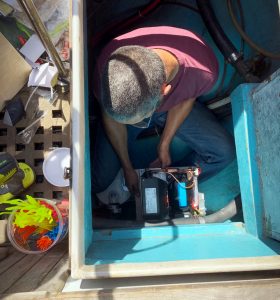 The biggest accomplishment of the week started with getting the lithium battery on the boat (replacing the two monster lead acid batteries weighing in at nearly 100 pounds each) along with a whole bunch of re-wiring to get things how we wanted it. This meant I could get the ice-box converted to a fridge now that we had enough battery for one. Kerri had spent the winter researching all the options and settled on the Dometic Cold Machine conversion kit. It took a full afternoon of climbing in and out of the lazarette but eventually she powered up and we officially have a fridge again… and most importantly (pretty much the only reason if I’m being honest) we have a small freezer so Kerri can have ice for her cocktails – woohoo!

Now, I’m off to do more work on the boat… which is where I will be for the next few… well, forever.