The end of Prince of wales 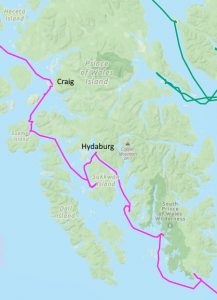 Craig was a nice enough little fishing town. During our stay we ate out each evening, visited all the local supply shops, and even got a few boat-to-dos done. But neither of us took any serious photos, as is our norm. We were both eager to get off the dock so after a two night stay we were cutting the lines and setting our sails to point us south once again.

Not a half mile out of the marina we were sailing, which was a nice surprise. The day proved to be a bit of back and forth with the sailing vs motoring, but about half our time on the water was engine-free. As we neared our destination anchorage – Port Refugio – we attempted another heave-to and sail drop, but things did not go as before. It took a little more effort before the task was completed but in the end it was all good. The afternoon and night were spent hiding behind a small island at the head of the bay, relaxing and watching deer swim from the island. And the following morning, upon our departure, a humpback was feeding so close to us we shut the motor off and drifted for a while to enjoy the show. 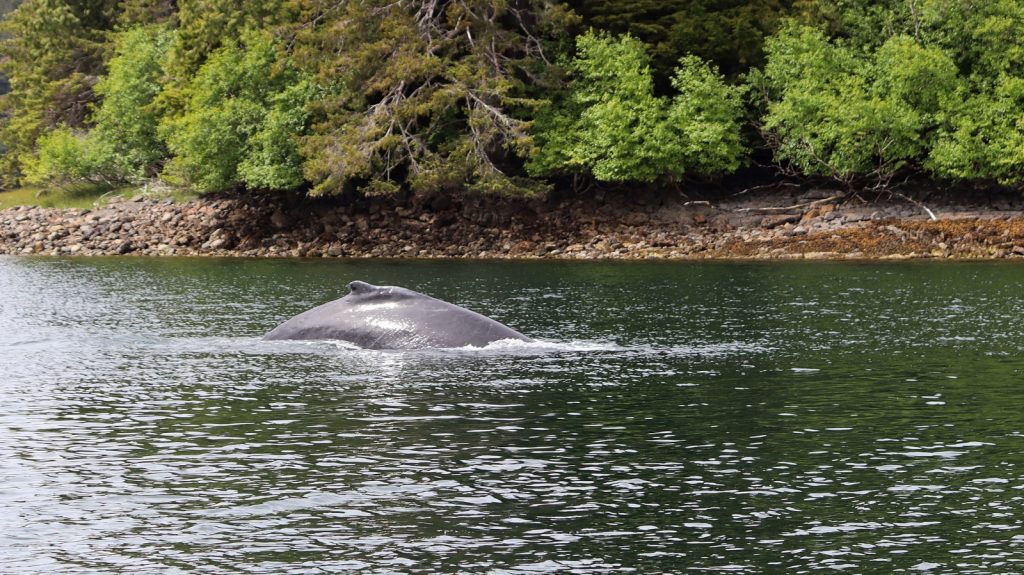 Zoon lens not required, this whale was not bothered by us and just kept on feeding. 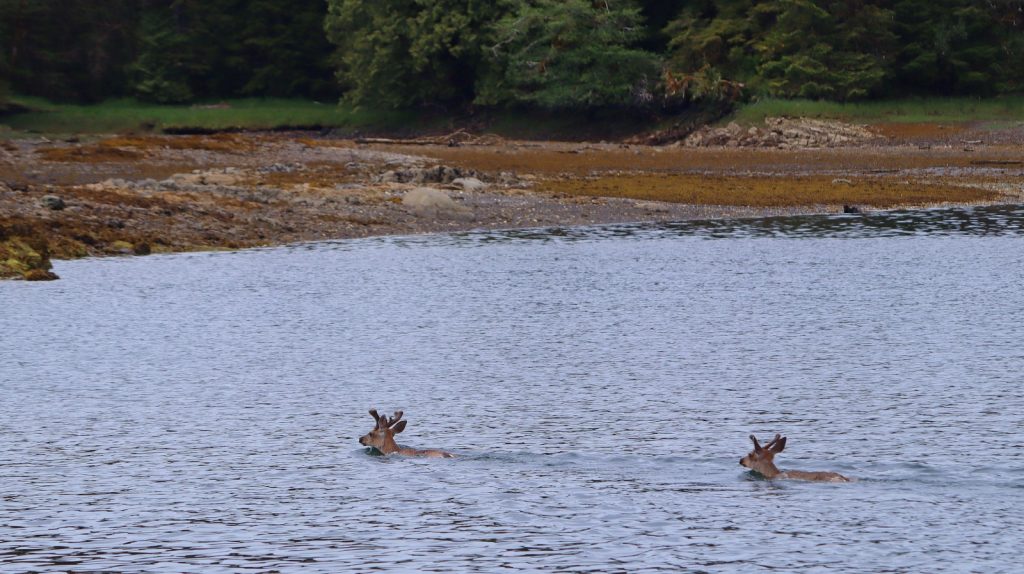 Kerri heard an odd noise outside the boat. By the time we popped up, the two deer had already swam directly past Meriwether.

Another long day of motoring brought us to an anchorage we chose to ride out a wind event the following day before heading into Hydaburg – a small native village and our last opportunity for supplies in the USA. It is rare this year to sit still in a single anchorage for two days. Our hop-scotch style of sailing recently has resulted in movement nearly ever day we are not in an established marina doing bigger chores. In the past we got to an anchorage and sat still for a work week, but this year that limitation has eased. By this time, not 6 weeks into our sailing season, we have already traveled more miles than our sailing 2019 or 2020 seasons. It has been a bit exhausting, so a day stationary at anchor was a nice treat.

Little did we know that Hydaburg would put a strangle hold on us for three nights with heavy rains and the wind howling out of the South. No one in their right mind was going out in these conditions, so we hunkered down and kept the wood stove burning. Hydaburg didn’t offer much. A single grocery store where everything was double-priced on top of the already double-priced Alaska prices. The marina didn’t even have bathrooms or showers. It was only at the very end of our stay that we realized our half of the dock had no water either. Not all that uncommon in these far out villages to be honest. 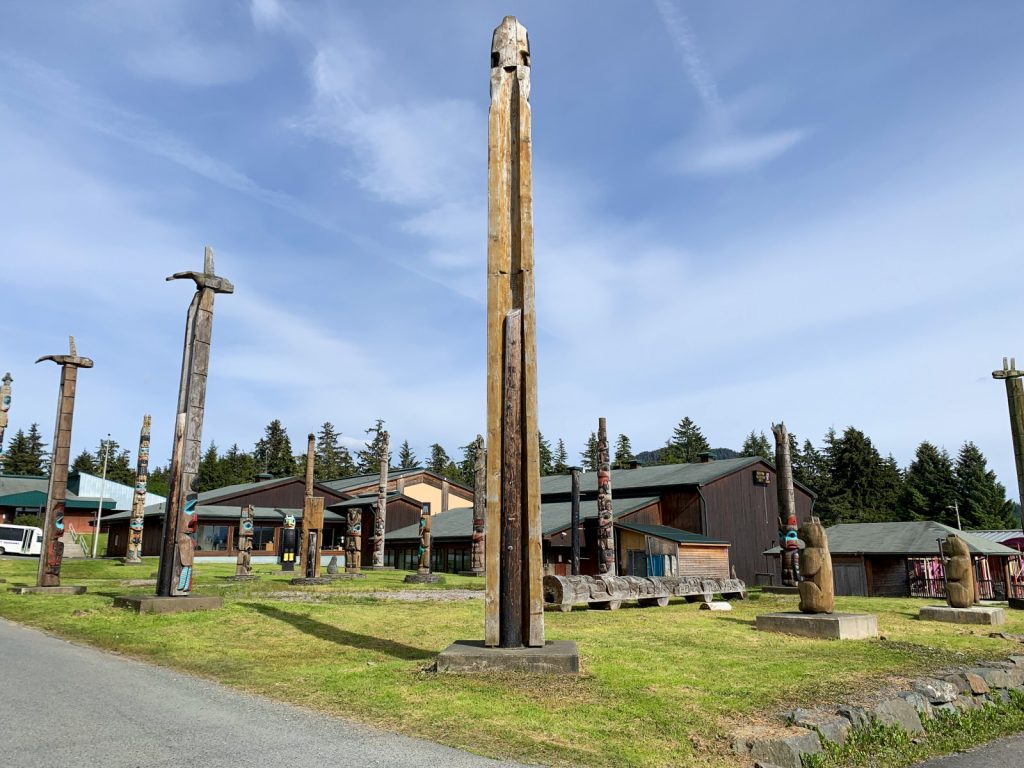 Hydaburg has an impressive collection of totems, but not much else 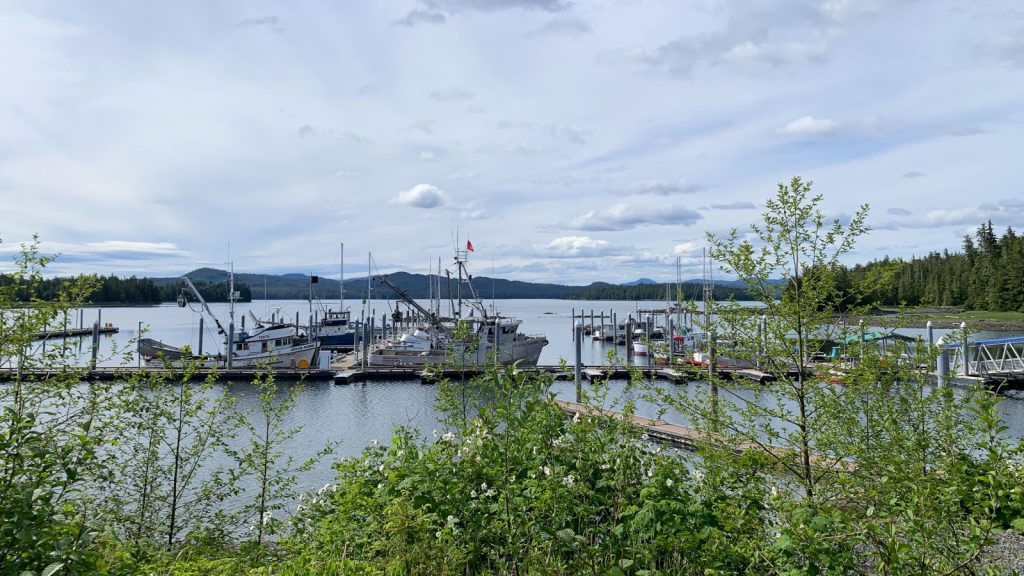 Finally able to depart Hydaburg, we spent three more days working our way down the remainder of Prince of Wales Island. Sprinkled throughout the rocks and islands were numerous intimate anchorages, each with their own flavor. We even attempted our first uncharted anchorage (an anchor spot not given to us by a guide book), one that I chose myself based on the charted depths and geography surrounding. Turned out to be a nice little spot to spend a night. 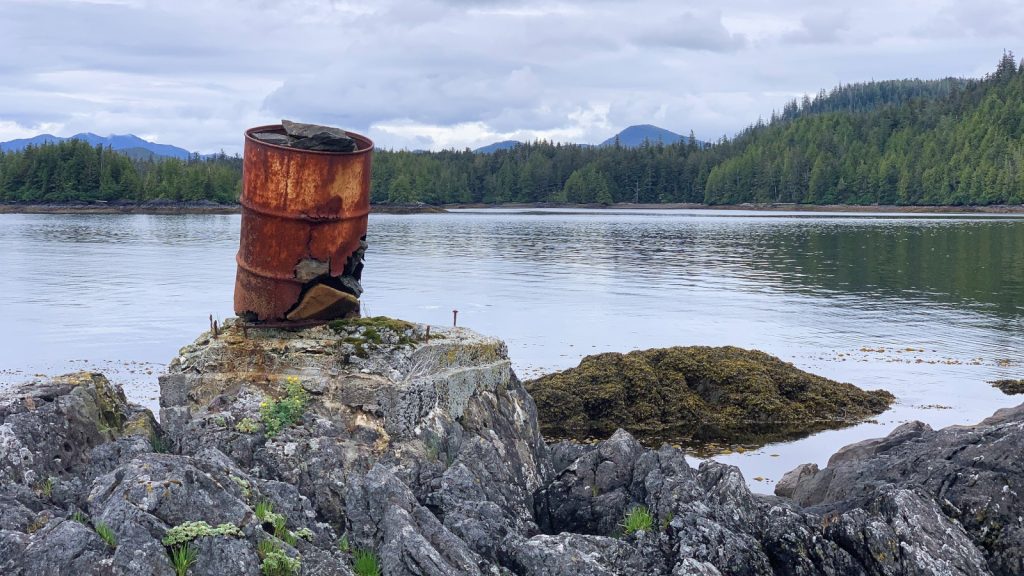 This is the “abandoned lighthouse” noted on the nautical charts. A bit underwhelming after a long day motoring. 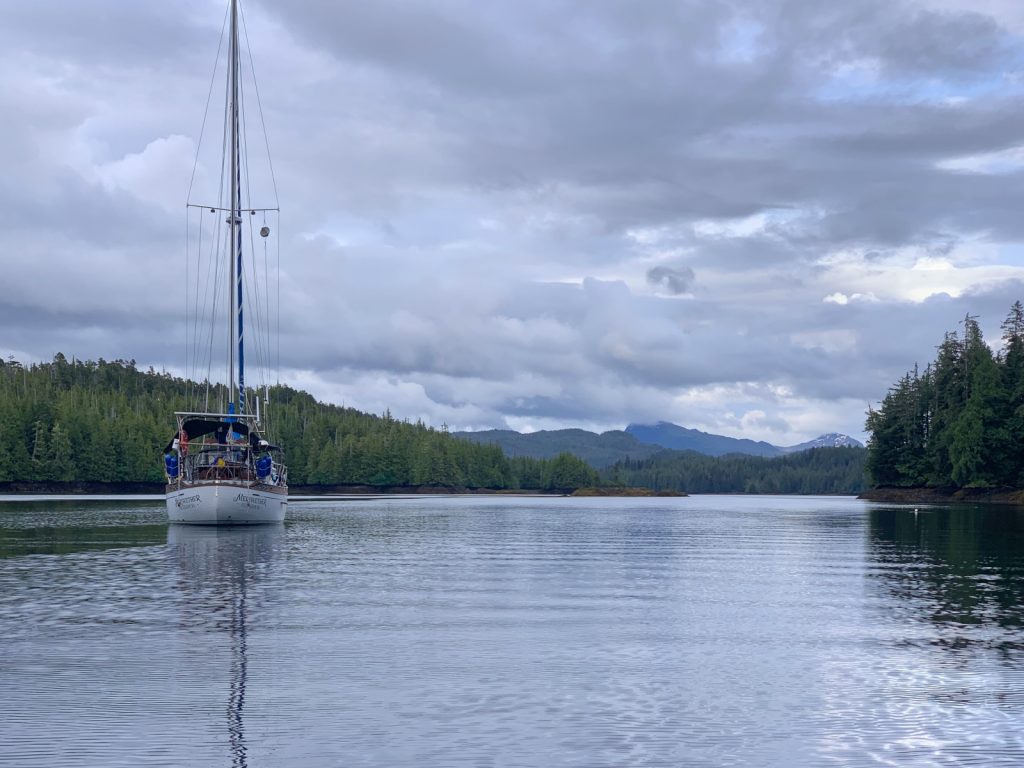 Finally we were in a spot to make the 90 mile jump to Canada. We had planned it to be an overnight passage, so left our previous nights anchorage in the early afternoon. We hadn’t sailed in days. Wind does not well penetrate the cacophony of land masses and islands this side of Prince of Wales. I grow frustrated with that, and by the time we had motored for 5 more hours this day, and the forecast promised no wind for two more days, I was in full on temper tantrum mode. No way was I going to motor the 90 miles across open water. No way. 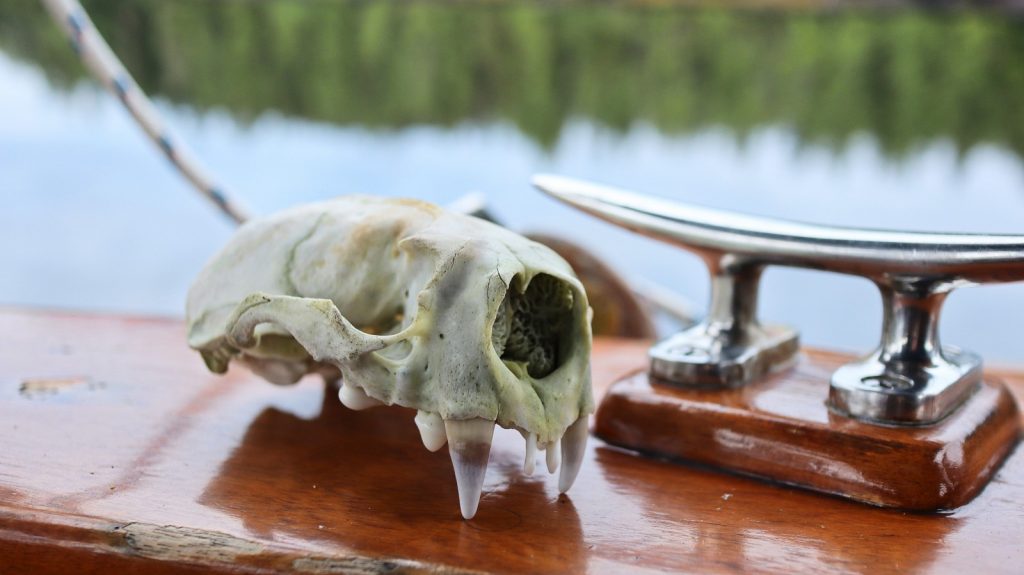 An otter skull found on the beach, now a memory-piece on Meriwether 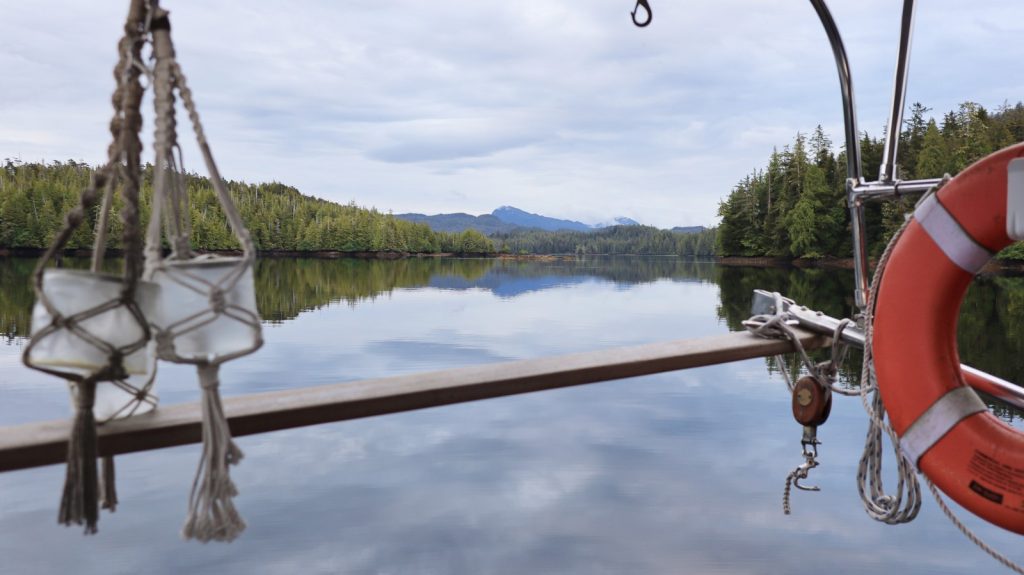 We were not doing this right! Why are we moving at all when the weather is not in our favor? We have been putting our schedule above the wishes of the weather, and that is simply not sustainable in boat-life. After much discussion, we decided to pull over in the next (and only) anchorage and put our schedule on hold to await proper weather to make the long passage into Canada. And the thing is, these days of stillness do not go unproductive. Jobs get done on the boat. Both Kerri and I get the chance to sit down and work to earn money. And, the muscles and bones get the time to recoup before the next transit. Two more days would pass before the right conditions would present themselves to finally leave Alaska… just one week shy of a full year since we arrived last summer.