Hold on to your cockles

After spending a few days soaking on hot springs, it was weather to move on to our next destination. The next leg would take us through Peril Strait, where there would be no sailing to speak of, but long hours of the motor rumbling away. At least the weather understood that fact, the wind no showing itself but for a small stretch. 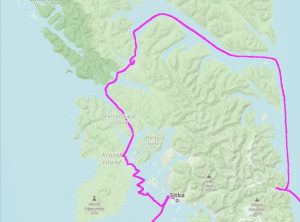 We had planned to leave at a very specific time of day, to ride the 1 knot current up Chatham Strait for a couple hours, then turn into Peril Strait where the increasing current would take us to our overnight anchorage. Said anchorage would be roughly half way through the Strait and would allow us to ride the current again the following day.

What I failed to piece together was that he current direction would switch within 15 minutes of our arrival of the half-way point (very top of route in image) meaning we could ride it out the other end right now! With the sun up and us happy to knock a days travel out of the passage, we chose to pass our scheduled anchorage and go an additional 17 miles – for a total of 10 hours and 57 miles in a single day, a brutal haul. The payoff was that it would set us up for a relaxing morning and great timing to pass through Sergius Narrows with a slack high tide. This, in turn, gave us an Ebb tide to ride the rest of the way out of Peril Strait. What a bonus to have everything working for us for a change, and one less day motoring sounded great. 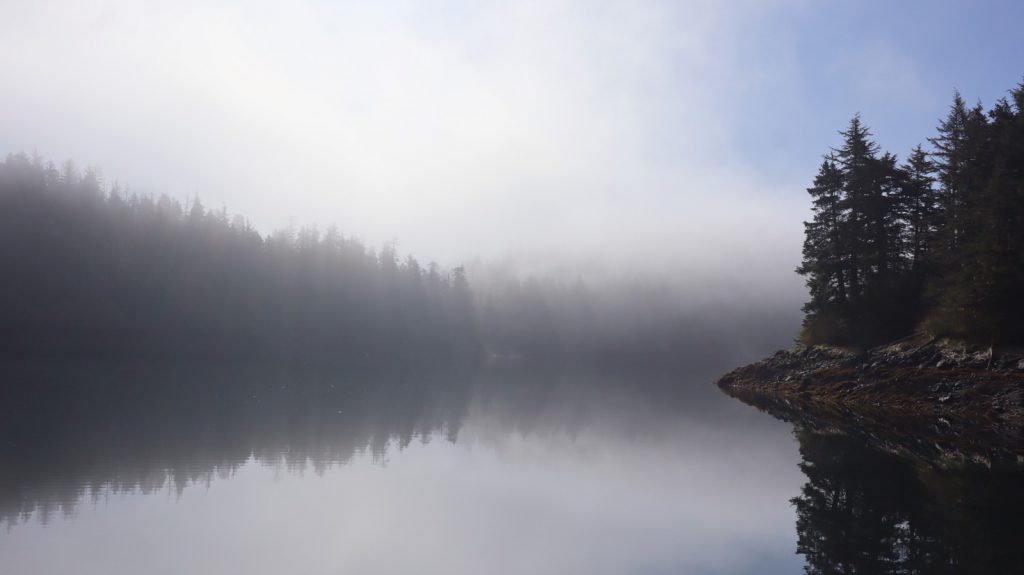 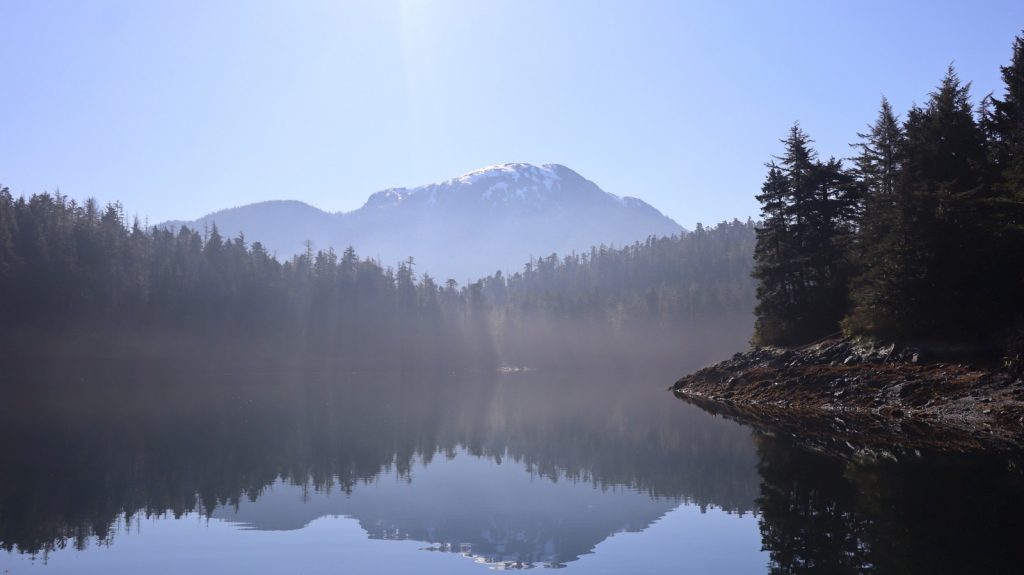 … and you get a completely different view

Our anchorage – Baby Bear Bay – was a tiny spot well hidden behind and between rocks and islands. Protected from all directions, we knew we would get a good night’s sleep, which we did. The following morning we set out to explore the next cove over where we stumbled onto an old hunting cabin ruins, and Kerri foraged the coast for cockles – which I promptly almost lost right back into the water. It made for a good start to the day, with the sun out and the temperatures gaining spring-like traction. 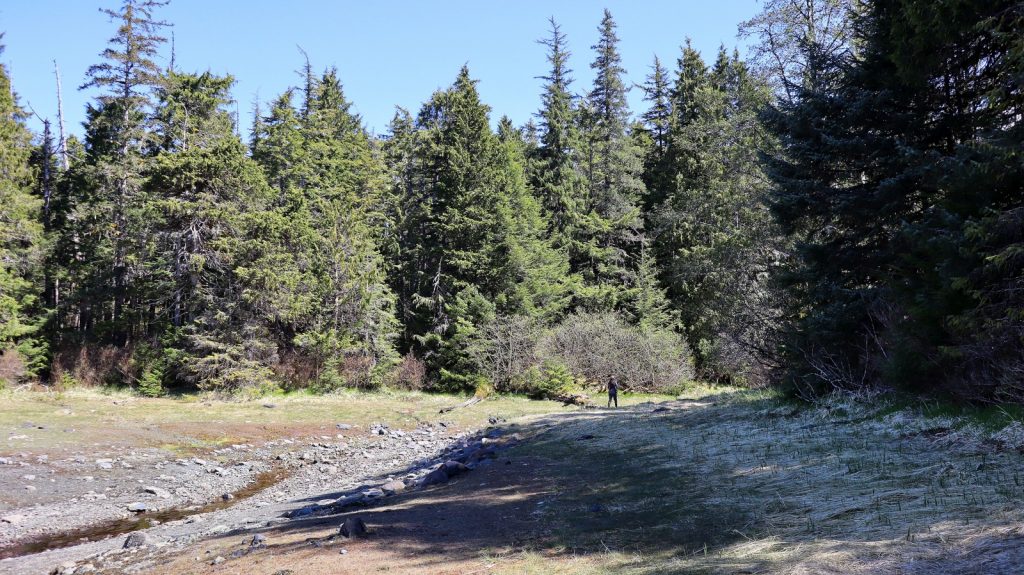 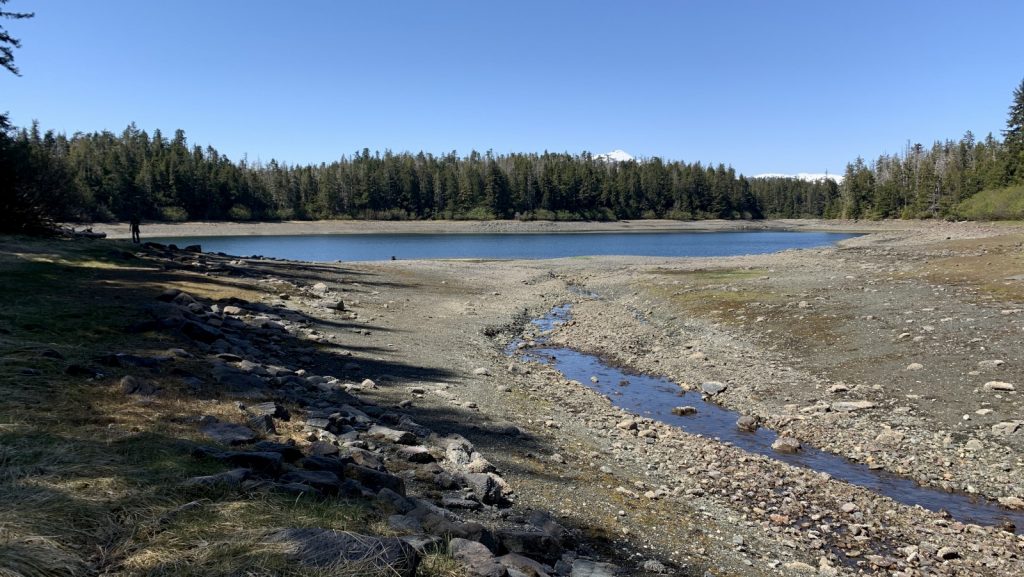 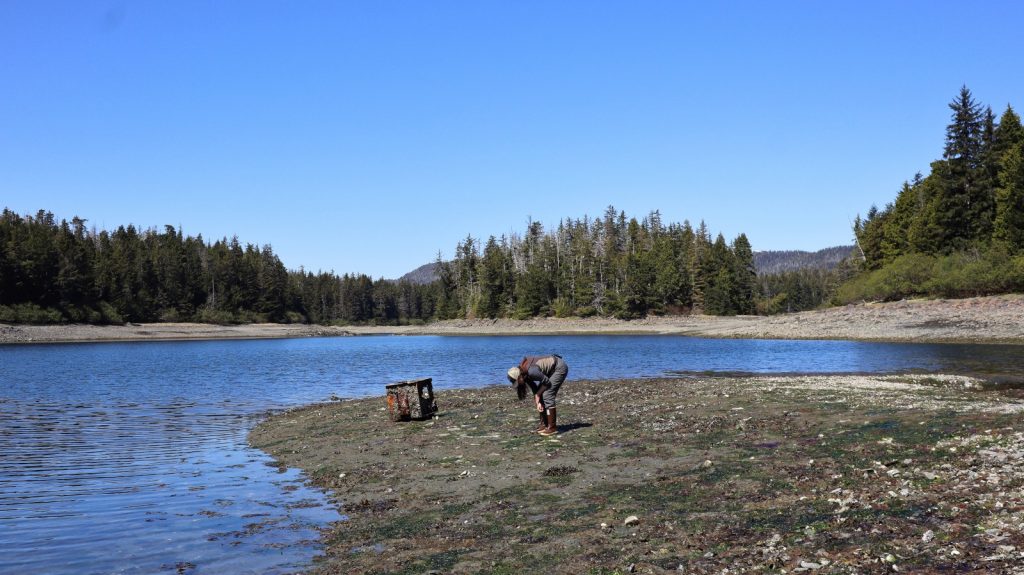 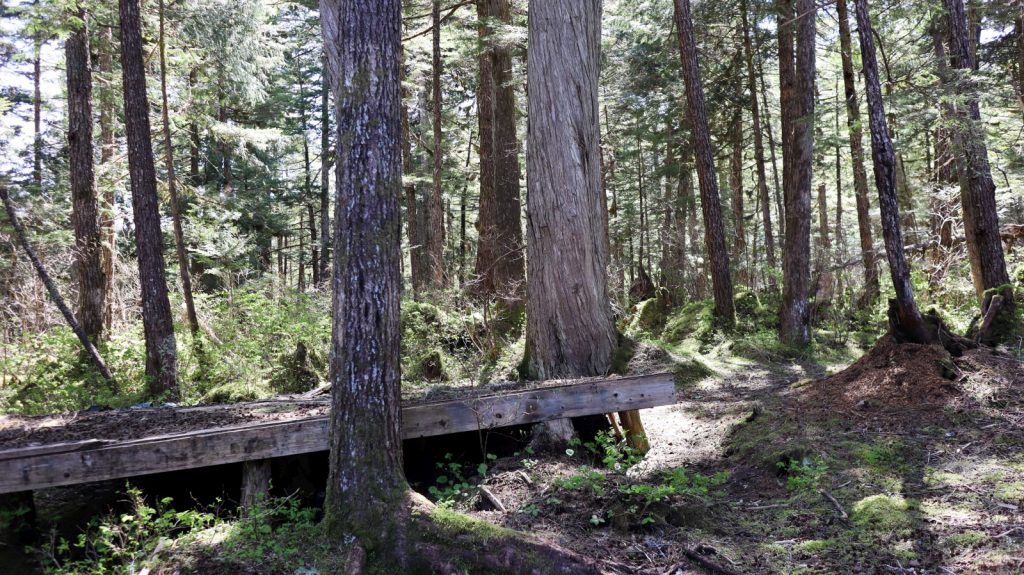 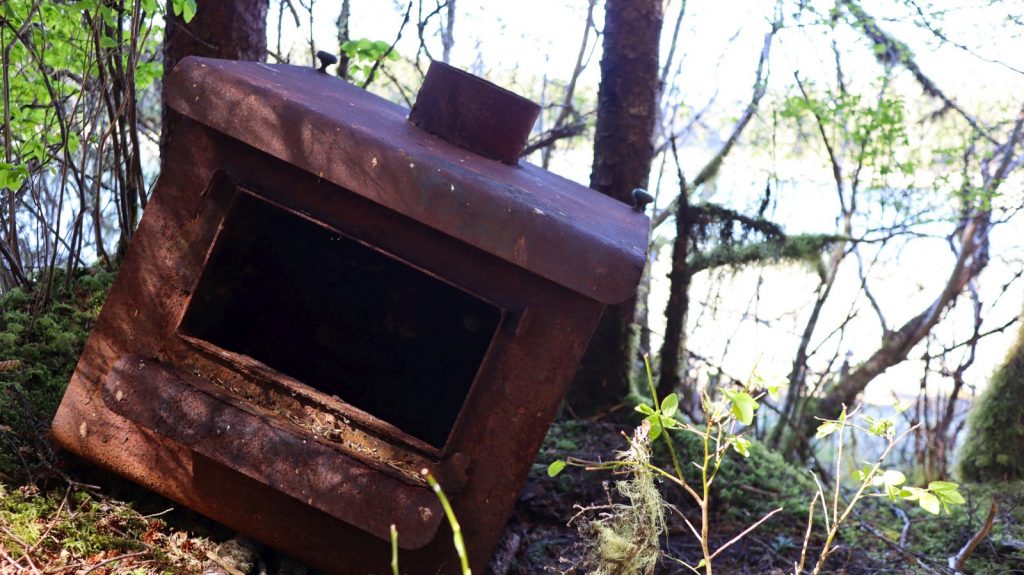 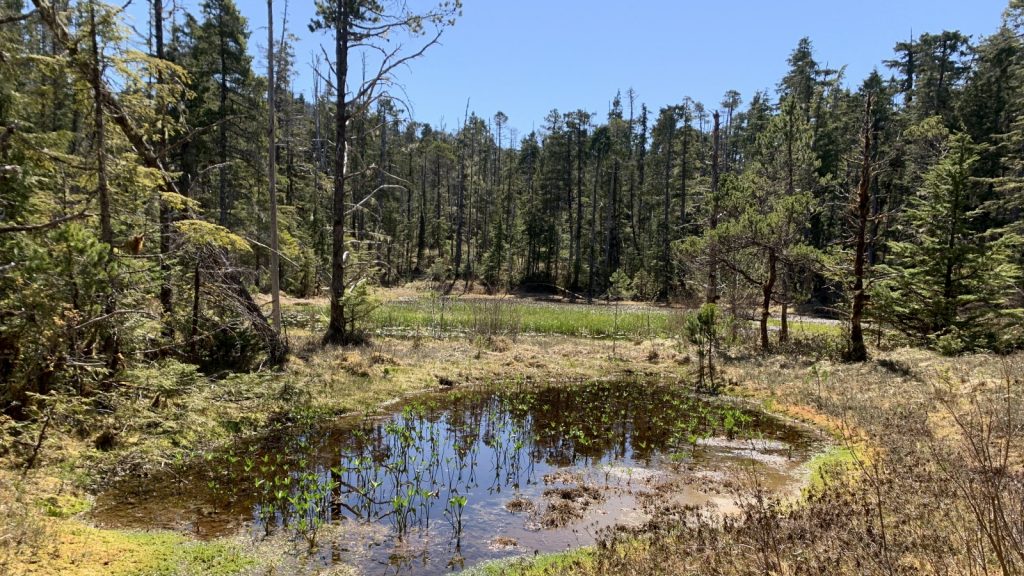 By early afternoon we were ready to get moving again, and did just that. Though the phrase “hold onto your cockles” was coined as we approached the mouth of the Sergius Narrows, we passed through with no drama to speak, and continued motoring towards Sitka. After a few more hours we rounded a particular point and were greeted with a view of the open waters of Salisbury Sound, which is open to the Pacific. From here we could turn West and sail directly into the ocean, past the sunset, and off to another continent – the first time we had such an option since last May. It was exhilarating. 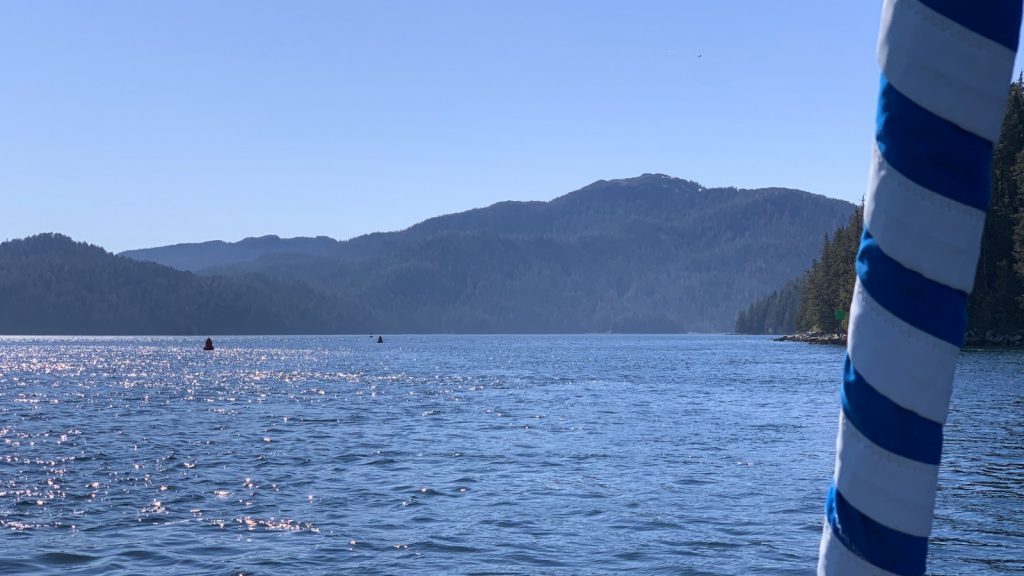 Sergious Narrows – doesn’t look so narrow, but rocks lurk underwater to the left of those bouys 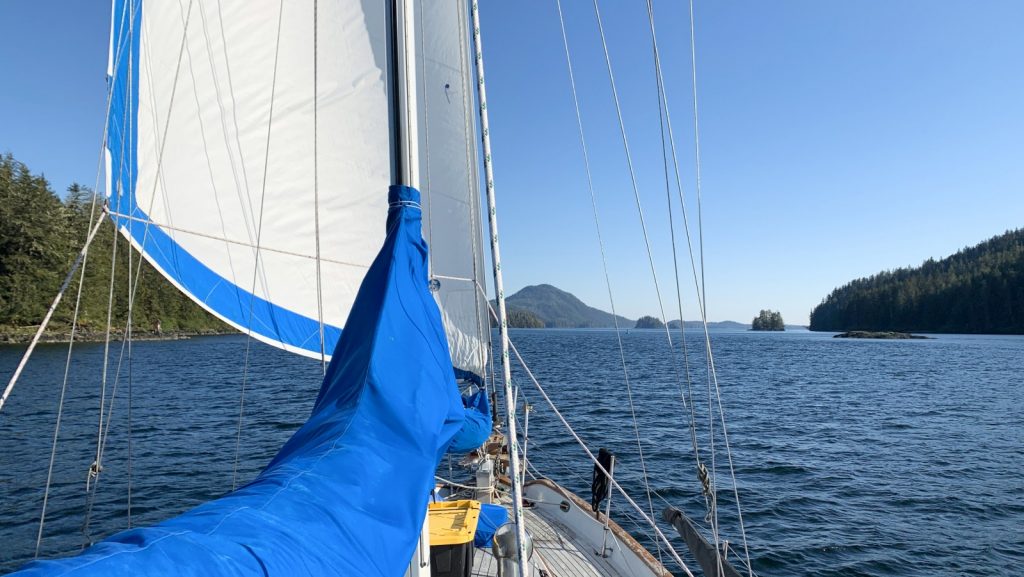 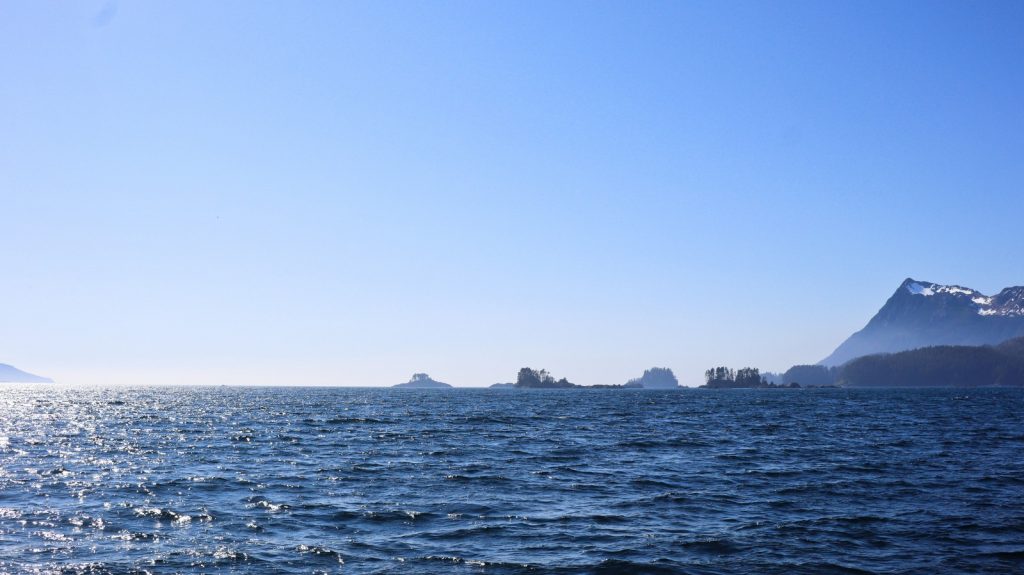 We chose to stay on our planned route, turning South and towards Sitka. Even though we were still in tight channels weaving between islands, the ocean-view gave us a nice breeze in the direction we were going. So, with Kerri’s uncertainty, I rolled out the headsail and sailed us through the next pass and narrows on our way to Mud Bay, on the East side of Kruzoff Island, where we thought we would have a peaceful final evening before arriving in Sitka, but instead found an ATV tour camp on the shore making all sorts of ruckus. To each their own I guess. We still slept well. 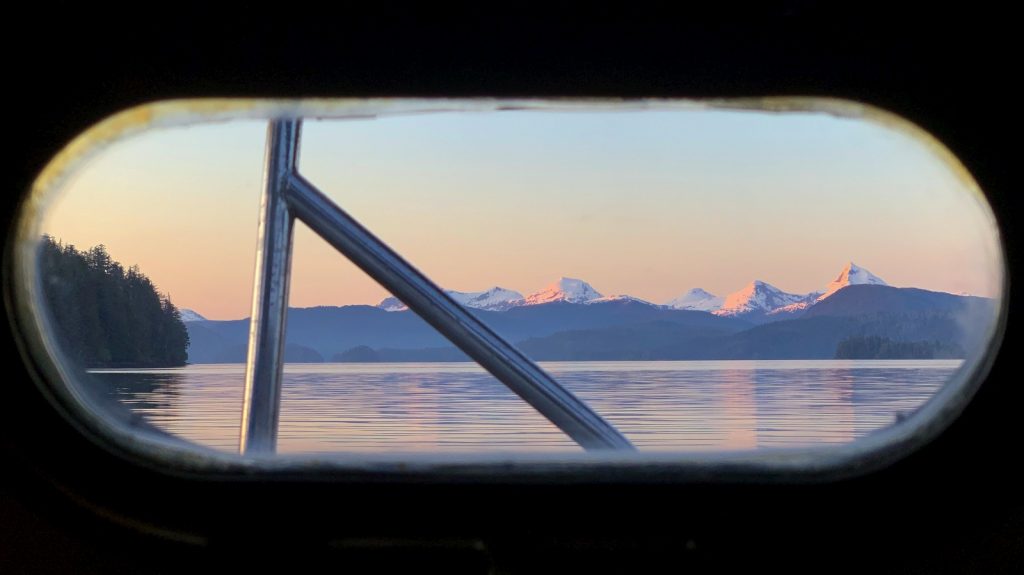 There was drama during this passage. I noticed that the engine’s water pump had leaked out a brown ooze just before we left Warm Springs. This meant that it was in the final stages of death. Of course this happens before a very specifically timed and long motor (the 10-hour haul). I kept us on schedule, but when we arrived to Baby Bear Bay I removed the belt to get a sense of whether I needed to replace it immediately or in Sitka. I plainly needed to be done right then and there, in Baby Bear Bay. Thankfully we were still carrying the spare that I removed back in 2019, so re-installed it with only 4 bolts worth of energy. It has been working great ever since. Another lesson on keeping and carrying spare parts