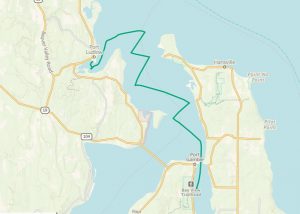 A phone call from my Mother & Sister prompted a quick reschedule of our next couple days. They wanted to drive out to visit before we left to Alaska. Luckily, the drive is only about two hours from there house to where we were anchored in Port Gamble, but the accommodations in town were slim. Not to mention this would then entail getting my Mother into a dinghy at shore, over to Meriwether a quarter mile out, and up onto the deck without falling. As I spent all of my mental energy trying to sort out those problems, Kerri (and this is why I love her) simply said two words, “Port Ludlow”. Duh! Ludlow is only a few miles North, has a great resort/hotel, and we could pull into a marina so my Mother – who has never seen our boat – can step aboard without all the danger. So it was done, and the following morning we would set sail for Ludlow.

We knew ahead of time that the wind would be on the frisky side of things (high teens to low twenties) and that we would be sailing up wind the entire time (nothing new to us). We simply slapped a reef in the main and jib and sailed on. It would take a total of three hours, but it went quickly with all the splashing and heel we had going on. For much of the sail we had sustained 22-23 knots of apparent wind – which was just perfect to push our envelope a baby-step. We have not done a lot of sailing in this sort of wind speeds as life has rarely necessitated. With the correct sail plan, it was quite exciting although not the most comfortable way to sail – at 20 degrees heel. As you can see from the map, there was some tacking up wind until the final stretch which was a down wind run for an easy sail drop and entry into the marina. The winds were still a bit stiff inside the marina, so we endured a single docking abort, then got it in there. 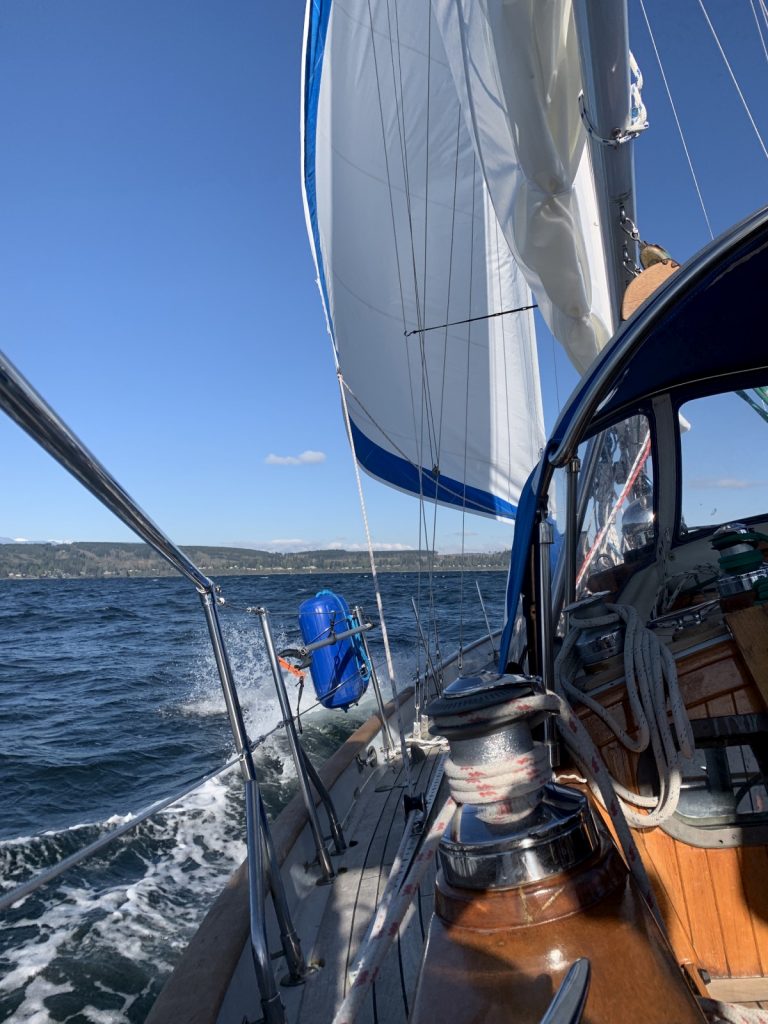 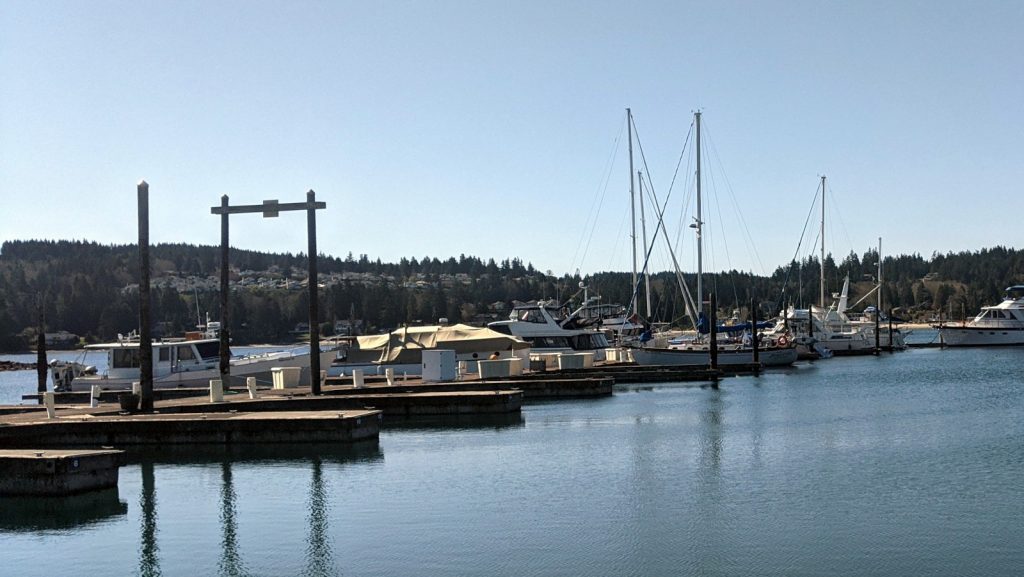 For the rest of the day we visited with my Mother and Sister; up to Port Townsend to show them where we have been living the past four months and to get the best Mexican food around. They were nice enough to shuttled us around for a few quick errands as we already needed more firewood and a few staple-foods.

Out of the four of us, this (below) is the only picture taken of any of us during the visit. I have no idea what is going on there, really. I do not recall there being a staring match at all that day, but pictures do not lie. 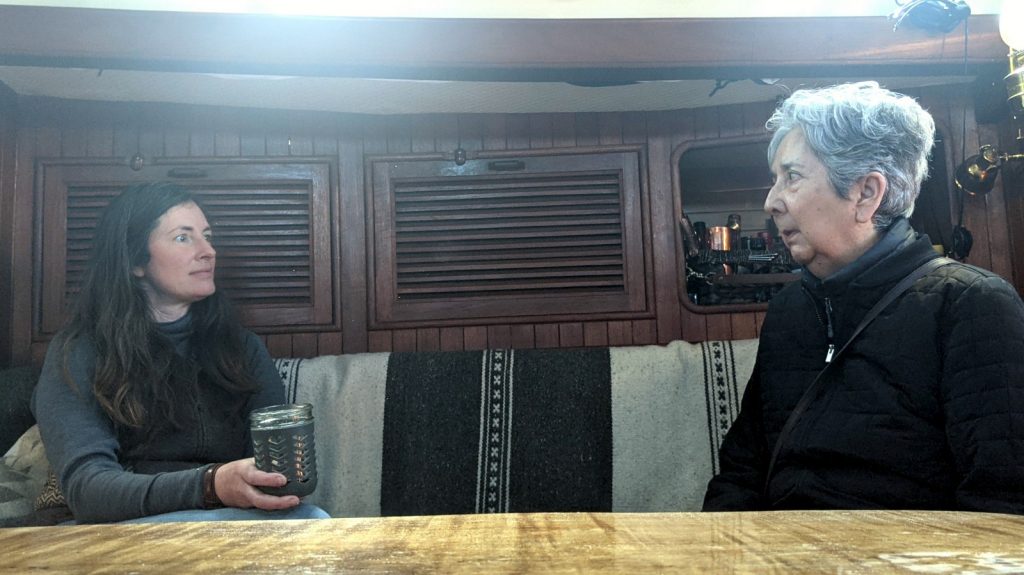 Trying to capture the moment, I instead caught this awkward stare-down from Kerri and my Mother 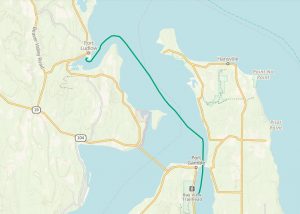 The following morning I sent my Mother and Sister off with a hug as they began their drive back home. Kerri had work, so I got a load of laundry done since we were in a marina anyway. Hot showers for the both of us hit the spot as well. But, by noon, we were shoving off from the marina and pointing Meriwether back towards Port Gamble. 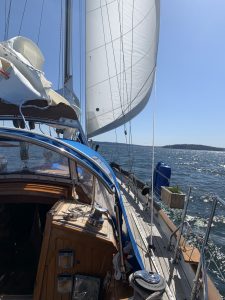 It was a down wind sail this time, which fit perfectly. Kerri still needed to work, and I was single handing the boat. Sailing down wind makes that super easy with the simple sailing hack of using only the head-sail. Sure, we do not go as fast, but a single person can handle the single sail with ease, even jibing. The water was rolling us a bit, but as long as Kerri wasn’t getting sick downstairs, all was okay. Things went so smoothly and calmly that I jibed (with assistance from the autopilot) and sailed right into and through the narrow channel into Port Gamble Bay and anchored under sail again.

We have only had three voyages in 2021 so far, but things are starting on the right foot. Thirteen+ hours of travel time, and only a single hour using the motor. While this is fantastic for us here in the Puget Sound, I do still need to give the motor a full and proper multi-hour run (in anger) after all that engine work done over the winter. That will come. For sure, that will come.

The wind stirred up the water to a fun texture