Half way down Hood Canal 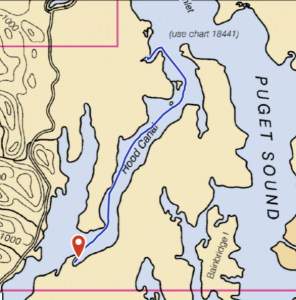 It has become a normal thing for us to not figure out where we are going next week until the eleventh hour.  Following the rendezvous, there we were again, in the same situation. It wasn’t until the very night before our departure, after talking with some locals in the laundry, that the decision was made to go further south – down Hood Canal.

Hood Canal is a natural fjord running about 60 nautical miles, forming the western side of the greater Puget Sound, and nestled at the foot of the great Olympic National Park. We were told that very few boaters – in comparison – make their was down the canal, a good selling point if you ask me. The locals also pointed out a few nice places to anchor, eat, and play along the route. Kerri and I committed to the voyage, setting out at 11 am the following morning (Monday).

We motored out of Ludlow. Wind was not scheduled to make an appearance for the day. We knew we would be motoring the entire trip – totaling 23 nautical miles. The first half of the day would be pushing against a gentle current, slowing our progress to not much more than a walking pace. The current would be tapering off, then flipping direction to give us a push mid way through the day. That was the plan anyway. At least the sun would stay shy all day, hiding behind clouds, keeping us from spending six hours under his eye (yep, a Handmaid’s reference).

Our first obstacle came only seven miles into our journey – the Hood Canal Bridge. The bridge is the longest floating bridge in the world (so they say), but being a floating bridge meant it wasn’t going to be very tall (only 50 feet in some areas). So we did some measuring and found that the top of our mast is 55 feet above the water (I rounded up). We would have to call in for the traffic to be stopped and bridge opened for us to pass through. Oh boy!

This would become our first bridge opening and entailed a call ahead to the Washington State department of transportation to schedule a time we would arrive. As we approached a half mile from the bridge we radioed in on our VHF to confirm our arrival and location of the bridge opening (Kerri was right, I was wrong… it happens). As we neared a quarter mile the traffic was stopped. We could feel the disdain from everyone in the immediately miles-long traffic jam. They may not know (I didn’t until the day before) but it is an old federal law that shipping has the right of way over vehicle traffic so tuck all those middle fingers back where they belong.

The bridge operator(s) waited until we were within a couple hundred feet before starting the process of opening the bridge. I could sense the anxiety building in Kerri as we got within a few boat lengths of what is still just a huge concrete wall. However, once the bells began to ring and the bridge began sliding open it separated quickly. I increased our revs to slip through the opening as quickly as possible so it may be closed behind to allow traffic to get moving again. In hindsight it was naive. How quickly I motored through played little to no roll on the length the traffic was stopped, which was nearly a half hour. I’m fairly confident that no one in line noticed the five seconds sooner they got moving thanks to my extra revs.

Once through the bridge we were only a third of the way to our destination. Many more miles had to be traveled, and many of those miles were in spitting distance of Naval Base Kitsap on the eastern shore of the channel. The base is a service point for all the Navy ships and subs in the Puget Sound. It is both required and customary to give military bases, and their ships/subs, a wide birth when nearby. We stayed well to the western side of the canal and made no sudden movements. Unfortunately, no nuclear subs were being escorted in or out of the base, so we did not get to see any. Only one smaller ship, that seemed to be out on a short patrol of the canal, was out that day. Maybe on our way back up the canal we will get to see a sub. 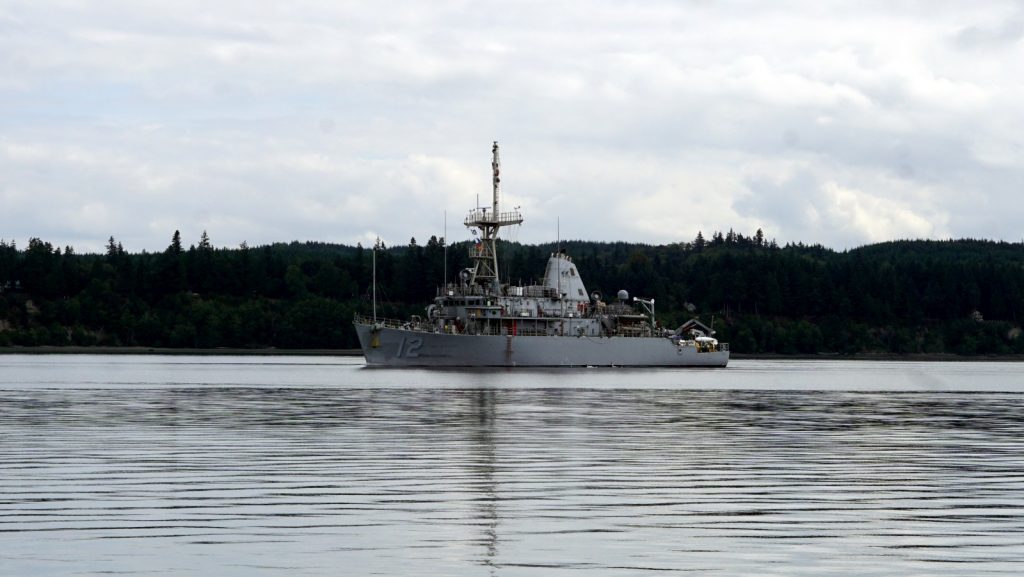 After six long hours or motoring – we tried a few times to sail but by the time we got the sails up the wind would die right back down – we arrived at our destination for the upcoming work week. This was the longest that our old Perkins has propelled us in one running. We do not dare push the old guy very hard, keeping it below 2000 rpm the whole time. Being easy on it means our speed over land was very rarely above 4 knots, which is a brisk walk for anyone on land. We were in no rush though, arriving just in time to do nothing of any importance at all.