Not all of our time in Port Townsend was spent walking, drinking, or working. There was the occasional occasion to get Kerri off the boat for a smidgen of socializing. We are two months into the full time sailing life, yet we haven’t been doing a whole lot of talking to others (not that we did a whole lot of that before). Much of our time is spent at anchor or on a mooring ball, so the only time to run into someone is when I bring Moose to land for a run around, when Kerri often stays on the boat. That leaves only a few chances to talk to other like minded people.

Meriwether has no problems starting the conversation with passersby. People walk up and ask about the boat regularly, so it is easy in a marina environment to get into a ‘convo’ (yea that’s right, I’m hip). Mostly it is the odd fellow sailor wanting to reminisce of the Baba they once owned, or chartered, back in the day. Speaking of Baba (as if there is a post on this blog in which I do not), there was another one in the marina that I wanted to go talk with the owners. She – “Brigadoon” – was a pilot house (1) model, one of only seven made in the world. It was while on deck cleaning up Meriwether that the owners popped in to say hello. We setup a time to drop in on them and did just that. Donn and Kerry have been living aboard Brigadoon for ten years and know their shit (literally, they have a composting toilet). Kerri and I learned more than a few things in the couple short hours we spent talking and touring each others boats. They sailed out the next day, but not before exchanging contact info. Whew, they liked us! 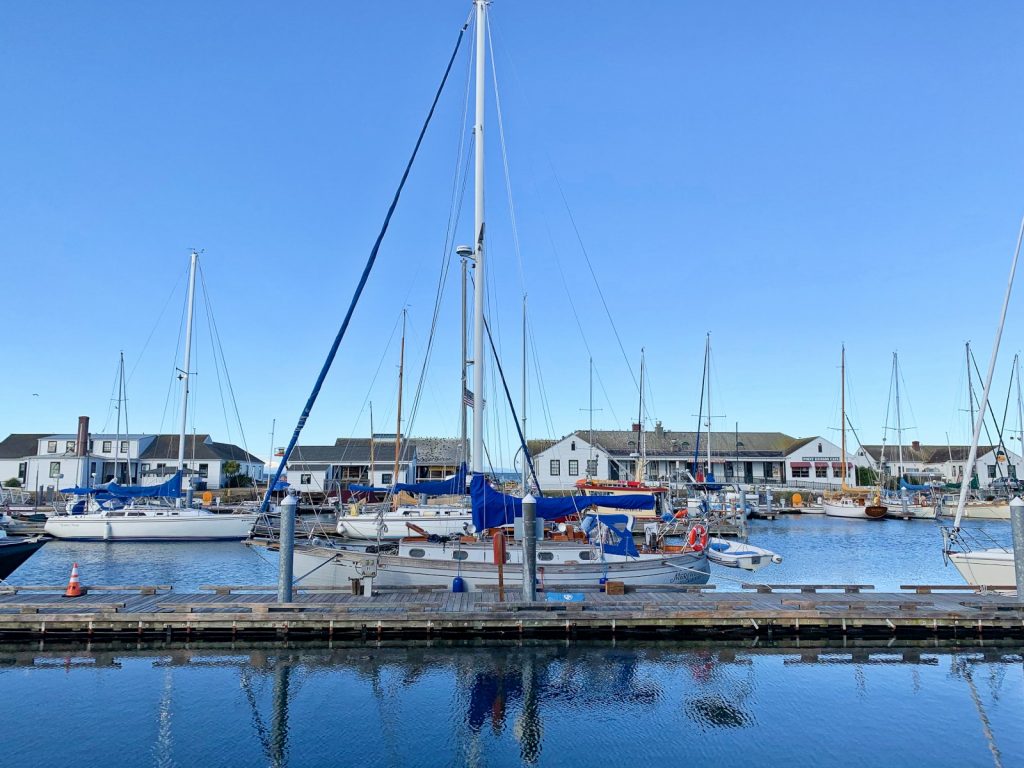 Towards the end of the week, we had to move Meriwether from our slip as we could not book it through the weekend. Our hope was to move over to the first-come-first-serve dock when a boat pulled out, which one did on Wednesday evening. I decided not to move that evening, instead tackling the job in the morning. That next morning, just before turning the key – literally – to make the move, another boat pulled in to take the spot. Joe, a solo sailor was looking to stay through Friday night and having the same problem as us with his reservation. He got there first, so the spot was his. 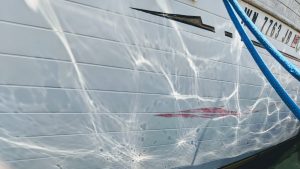 Just a minor kiss from the dock

Kerri and I were able to move the following morning with another boat pulling out. We made the move quickly before another boat could steal it away from us again. Friday was scheduled to have some pretty bad winds so we really didn’t want to leave the safety of the marina. We pulled into the spot so quickly (mostly to ensure the bow didn’t wander off with the wind as it likes to do) that Meriwether made slight contact with the dock, leaving just smear of lipstick on her bow. Nothing major. Easily removed, which I did immediately as it was quite an advertisement of our lack of experience. 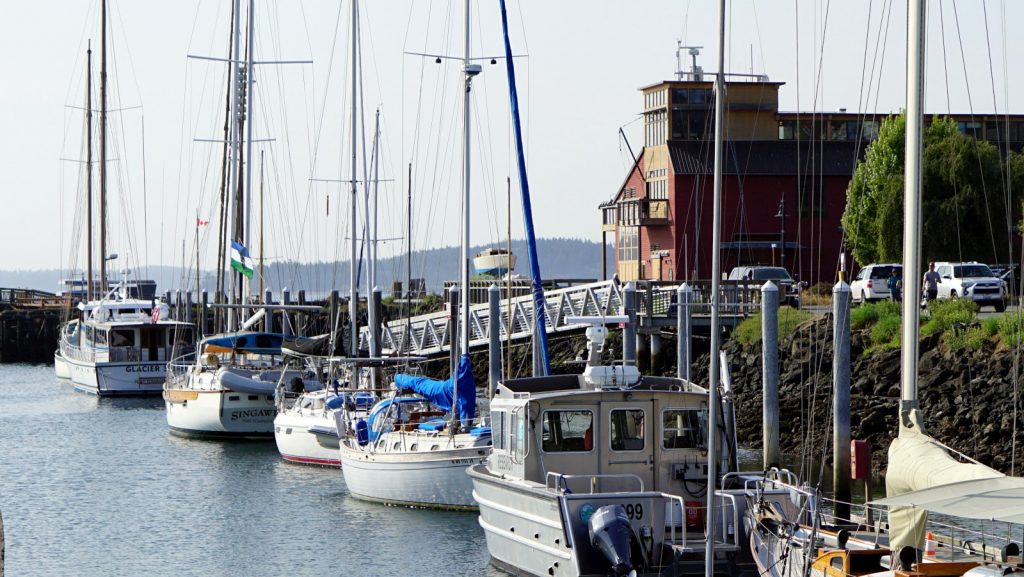 Later that night we got to hang out on Joe’s boat (now our next door neighbor) and get to know each other. Joe was yet another guy who has been sailing for many, many years and again we learned a lot from him. His boat was not of the same family as Meriwether, but that didn’t matter. Joe would sail out on Saturday morning, opening up the spot next to us for another.

The spot would not stay empty for long. With our help, a 43 foot Hans Christian docked and became our new neighbor. When Kerri and I first talked about buying a boat, a Hans Christian is all she would talk about. They are supremely beautiful boats (google them), extremely similar to our Baba in so many ways. In fact, Bob Perry (the designer of our boat) designed the early Hans’ and it was obvious. She – Stardust – looked like Meriwether’s big sister, but with two masts and a whole lot more varnish. She knew she was a super-model of a boat, complete with her nose high in the air to look down on every other around. John and Kate – the owners – invited us over to chat. That evening we hung out on their boat doing what you do on a Hans – drinking wine with a spread of smoked salmon and crackers. They all do that, right? John has many years sailing experience and was yet another wealth of knowledge. Kate had just completed a week long sailing course that very day. It was why they were in PT, for the sailing course. They sail out of Bainbridge Island where they live. Yet another couple that were extremely nice and helpful, and we exchanged contact info, and toured each other’s boats – the next morning before it was our turn to sail out of the marina. 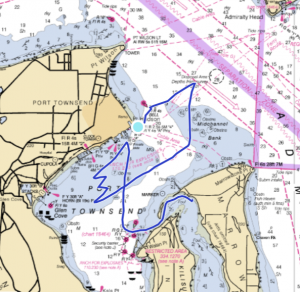 Sunday and time for us to leave Port Townsend. We didn’t have far to go – only about an hour to our next stop for the week – so I plotted out a route that would allow us a few hours of sailing in the Port Townsend Bay before heading to our destination. Kerri and I desperately need some “pleasure sailing” and practice. We also needed to get a good one in after our last one where we got our asses handed too us by the wind right at the end. So off we went for a lap around the bay – the wind coming from the north-west. Sails up right out of the marina walls, even getting to sail on a reach (2) and down wind (gasp… unheard of) for only our second time ever when we noticed another boat coming right at us from our starboard. It was John and Kate on Stardust! They left the marina soon after us and caught up to say one final goodbye before peeling off to head back home by coming up and sailing beside us for a few minutes. They have no clue just how exciting it was for us to have them come up and sail right beside us like that. 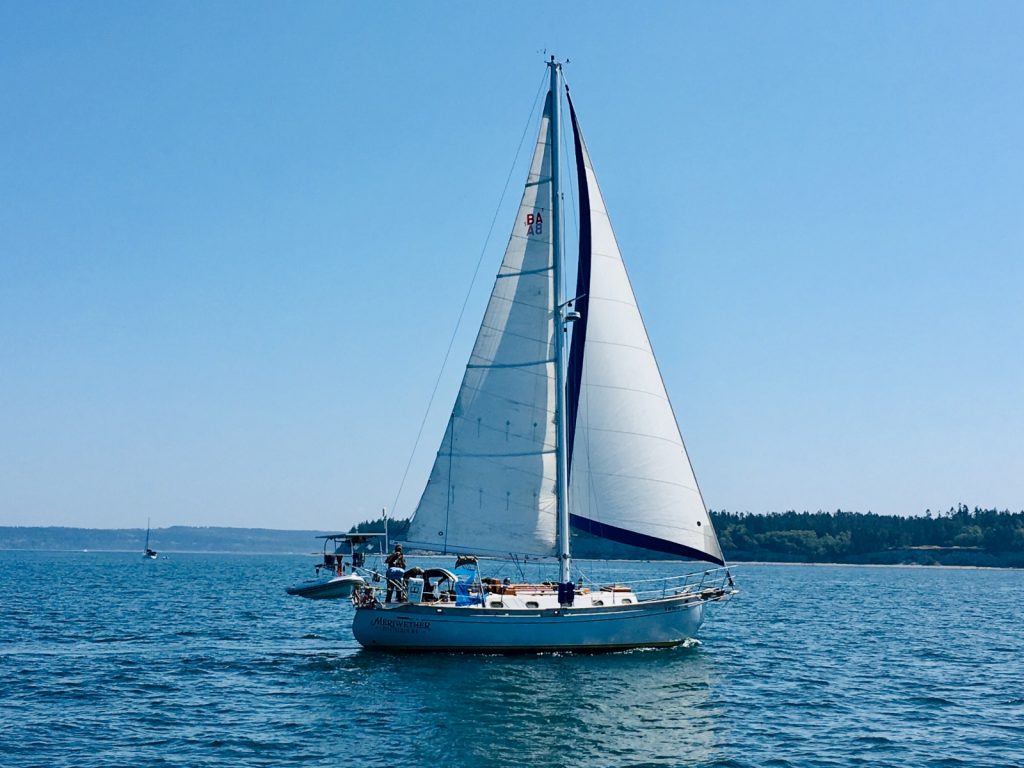 John took a few photos of us during their sail-by 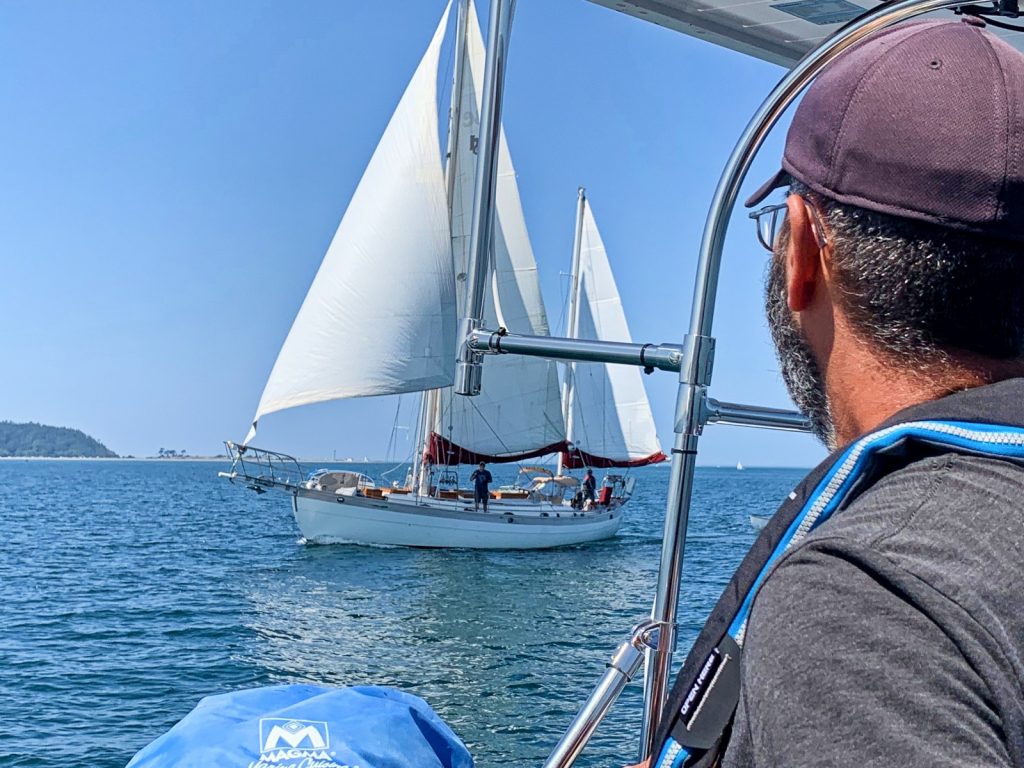 And we got a few of them as well

Kerri and I sailed around for another hour and a half, getting to try all the points of sail for a change. One of the things we learned about our boat from Donn and Kerry was that our stay-sail (3) rigging was easily and quickly removable. That explained what a couple pieces of hardware on the cabin top that I couldn’t figure out before. Since we were not using our staysail just yet, having the rigging out of the way would make tacking much, much, easier… and it did. The few hour sail went smooth as silk. Personally, I needed a good pleasure sail with nothing major coming at me. Even our un-docking was a new maneuver to us – backing onto a stern line to pivot the bow away from the dock then letting the wind do the rest of a 180 degree turn in tight quarters – which went exactly as planned… if felt good. And to toss in the cherry of that Hans sailing up beside us… man, what a day. 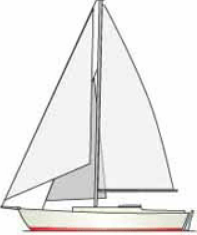 1 – A pilot house is an enclosed structure, with windows, in which the boat can be sailed from.

3 – The staysail is the third sail in a Cutter rigged sailboat (a boat without it is considered Sloop rigged – very common). Between the head sail at the very front of the boat and the main sail at the center. The staysail is the smallest sail of the three but when used in conjunction with the others, it can add some much needed speed for longer passages.