Friday afternoon, with only hours left on our slip rental, we untied from the docks and slid out of the marina into open waters. By this time in our sailing life we were feeling like this act was routine – the motor out of the marina – but once the sails went up everything changed. This would mark the first time we were sailing away – for good – to an unknown life of new adventures on the water. It took a few miles of sailing for it to set in. The smiles crept across both our faces as it felt good to be nomads again. We did this! We *are* doing this! Only nine months ago we had no clue we would be sailing in 2019. And now we were leaving land for good.

END_OF_DOCUMENT_TOKEN_TO_BE_REPLACED

Our first full week living at sea was spent only a few miles from our launch point. Inati Bay was an ideal location to shakedown the whole living on a boat in the wild thing. It was small, surrounded by nature, offered good protection, and most importantly only an hour’s sail (or motor) from a major marina if we found some big issues, which we did not.

END_OF_DOCUMENT_TOKEN_TO_BE_REPLACED

We left Inati Bay after slightly more then a week there. We would head South to Anacortes for a couple day stay to resupply the fridge (already, I know) and get a few more items from a marine store for projects we came up with while at anchor during our first week. It wasn’t going to be the best day to sail, with moderate to light winds all the way there, but it would be pleasant enough for our first voyage to a whole new destination. This would be the first time we take our boat out of the greater Bellingham Bay area, and I was pretty damn excited about that.

END_OF_DOCUMENT_TOKEN_TO_BE_REPLACED

Not only was it a quick jump to our next destination it would all be done under motor-power. Eagle Harbor on Cypress Island, only 7 miles to our north, was to be our home for the week. The write-ups in the books put it at the top of our list, even with the warnings about being open to some winds. No big deal, we need to get acquainted with the boat rockin’ and rollin’ at times, right? Plus, we would be picking up a mooring ball for our first time, who cares about wind when we are on a ball. Eagle Harbor is a beautiful little cove surrounded by cliffs on two sides and a long beach at the furthest tip. Established trails led up and all around the island. We knew at first glimpse that we would be enjoying ourselves here.

END_OF_DOCUMENT_TOKEN_TO_BE_REPLACED

Happily leaving Eagle Harbor, we only had 7 miles planned for the day. A nice straight line connected us to our next destination – Clark Island Marine State Park. With the dinghy in tow for the trip, we set out to cross our first big shipping lane to get there. The wind slept in that day, leaving us to motor the entire way making it the last 14+ miles of straight motoring – not the greatest resume for a sailboat. The one other sailboat we came across who was trying to sail seemed to be moving backwards thanks to the current.

END_OF_DOCUMENT_TOKEN_TO_BE_REPLACED

We heard about Sucia Island just before we started our adventure a month ago. Looking at it on a map it appeared to be an amazing playground for sailing nomads with numerous anchorages, camp sites galore, and a good helping of hiking trails on land. A month prior I was seriously looking forward to Sucia Island as our first true anchoring adventure, so our turn North last week may have been influenced a bit by Sucia.

END_OF_DOCUMENT_TOKEN_TO_BE_REPLACED

Echo Bay is the largest bay on Sucia Island, with room for many dozens of boats. The decision was made to anchor in Echo Bay instead of taking up a mooring ball for better nights of sleep. Plus, there is a three day limit on a ball, so we would have had to move mid-week anyway. It is just easier to drop anchor and stay in the same spot all week. That meant we were staying a little further away from shore though, roughly a quarter mile – about twice the distance of the mooring balls. Not a huge deal, unless you break a blade off the dinghy motor’s propeller, which I did on the very first day. This meant I had to paddle in to shore the two or three times each day for Moose to use a bush. I got an upper body workout for the week.

END_OF_DOCUMENT_TOKEN_TO_BE_REPLACED 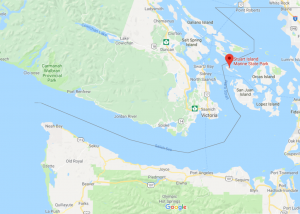