Even with us feeling the crunch on time to get to Port Townsend to get a bunch of work done on the boat before heading offshore, we felt the need to take the long way up and around, instead of take the normal – and fast – Johnstone Strait. This didn’t start until a few minutes before leaving Port Harvey, at which time a quick conversation with our neighbor-boat told of us a great place, that no one goes too. This is why we travel, right? So we took the local’s advice and planned a bit of a detour.

Once we got back out into the main ‘highway” of water that is Johnstone Strait, it was apparent that solitude would no longer be a part of our lives. Boats surrounded us, going in all directions – up or down being the only two options really. There was no escape. Keeping our eyes forward, we motored into the next channel, escaping the rush hour traffic. This route would take us to the north of Hardwick Island, where the current would run strong in our favor. Just under seven hours is all it took to make the nearly 40 miles – all motoring – to our destination of Sydney Cove. 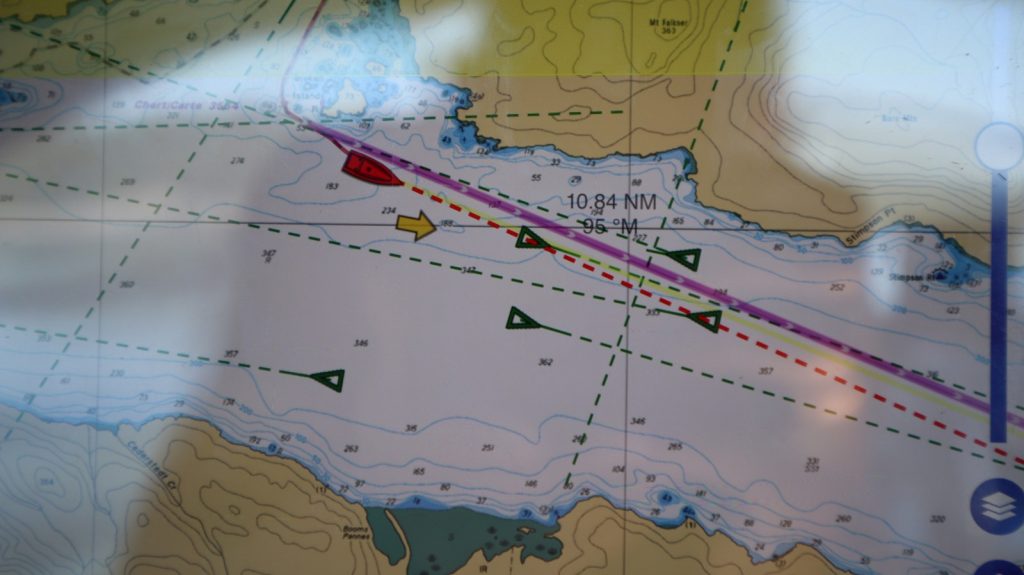 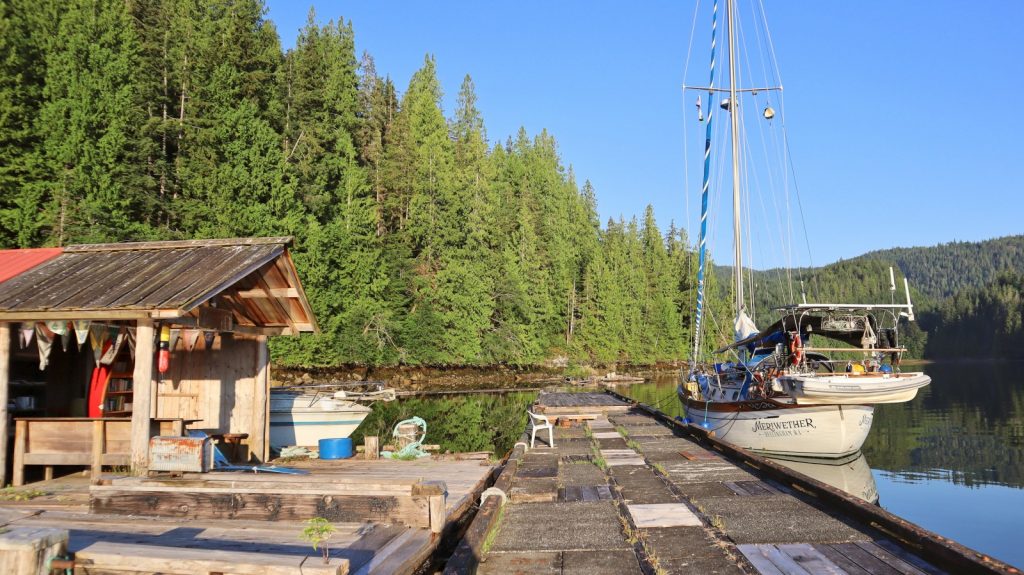 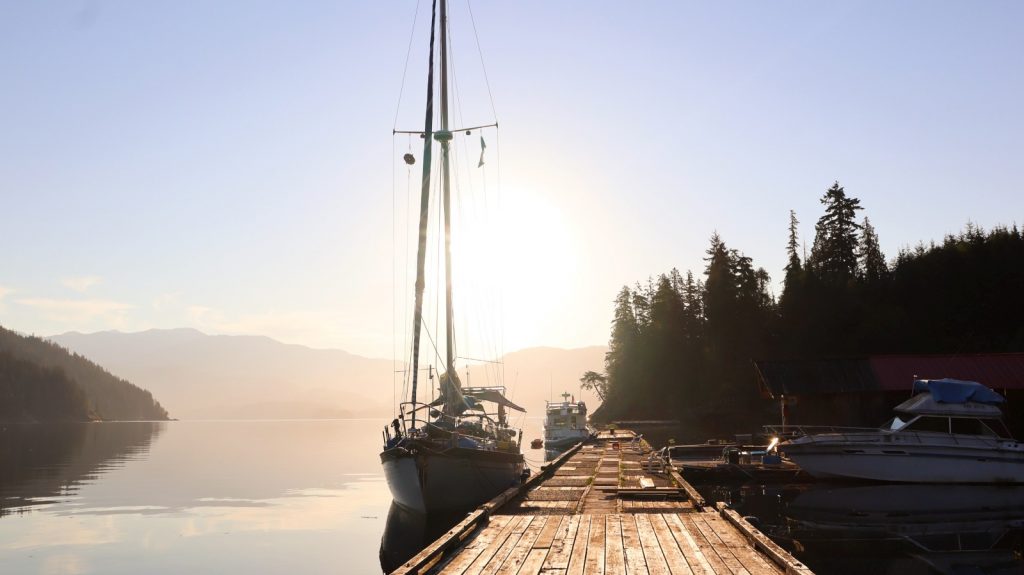 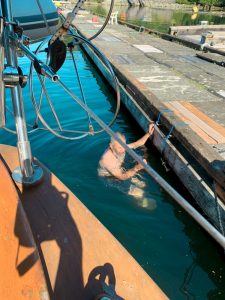 If memory serves this was our first real hot day of the year. Probably only into the low 80’s, but when a “hot Alaskan day” is barely in the 70’s, and you have been there for two summers, 80 is blazing hot. Upon glancing a our instruments after Kerri’s masterful docking I saw that the water temperature read 74 degrees. !!!! (yes, that is a full sentence). Meriwether wasn’t even fully tied to the rickety old dock before I was in my shorts and diving head first into the water. T’was bliss. Kerri joined for a bit, but I went ahead and swam a few laps around our boat, then decided to tackle fixing that clunking sound on our rudder – a large zinc that had worked itself loose and needed a few wrench turns. This was the first time, in our entire sailing in the Pacific North West, that jumping in the water was not a risk of death, as hypothermia is real up here.

A relaxing afternoon and evening was followed by a relaxing next day’s sail – err, motor. We would only have to travel 15-ish miles this day, but timing was everything. We had the first of three “rapids” to deal with; Greene Point Rapids. Always a bit more stressful, rapids are quite tame if you hit them at the correct time. Our plan had us arriving well and properly early It is easier to kill time then it is to make it up. So we puttered into a head-current, slowly inching our way to the Point while watching our predicted time of arrival. When we did arrive, there was no drama but for the mad rush of all other cruisers wanting to pass through the rapids at the same time as we did.

Unable to continue any further that day, as more rapids were ahead with the current now running strong, we chose to hunker down at Shoal Bay in hopes of a shower and laundry at the resort. While we were forced to participate in the price-gouging for a single load of $14 laundry (the sheets were in dire condition) we chose to not pay for the shower. Little did we know this would be our final opportunity for a hot fresh-water shower for weeks. 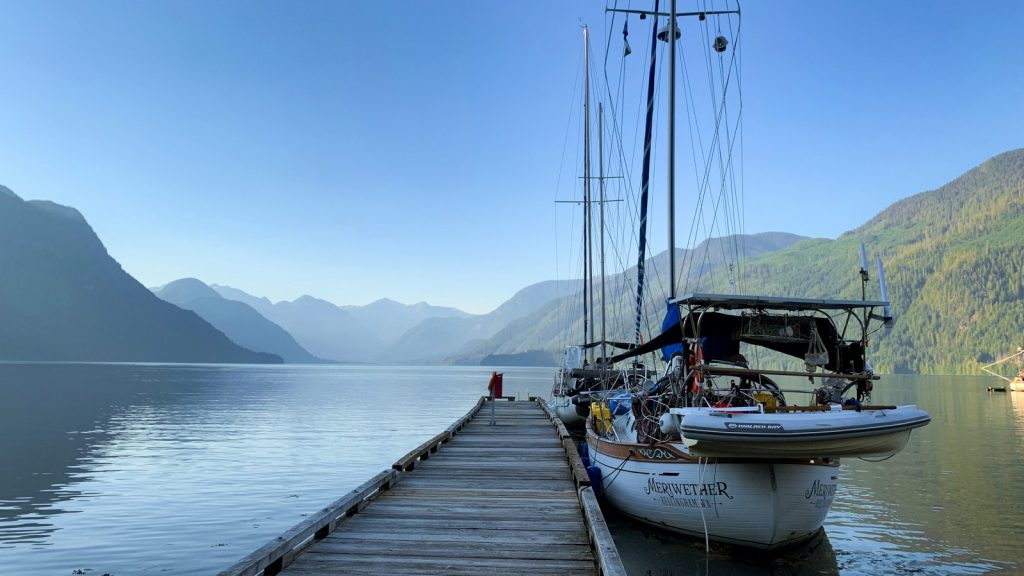 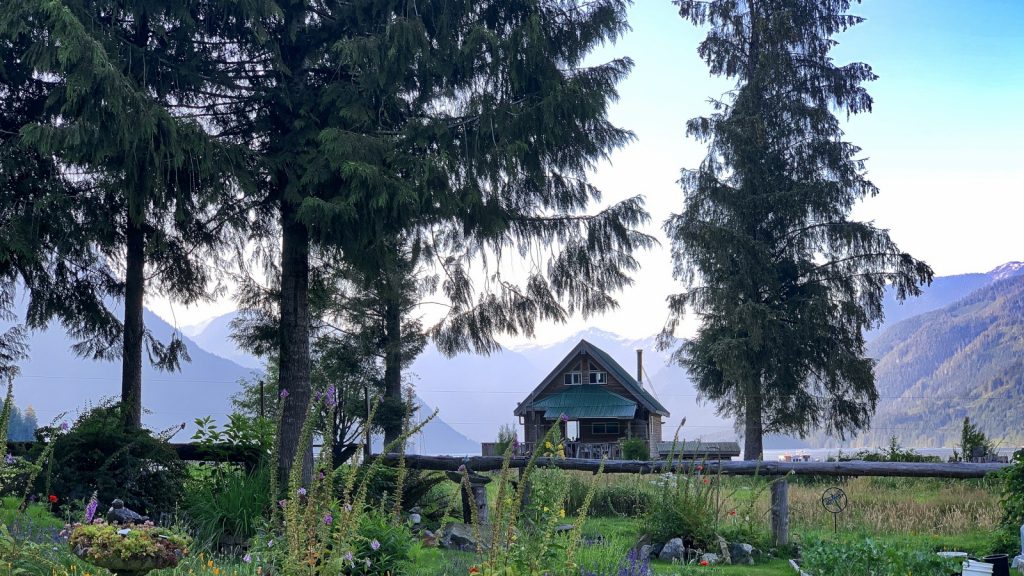 The resort was magical though. With wild-landscaped grounds, quaint cabins and camping, a communal food prep and dining area, and one heck of a nice view up the channel this turned out to be the right spot at the right time for us. We went for a short hike along the trail, picked some fresh veggies and herbs in the garden (funded by donations). All in all it was a nice day and a half we spent just enjoying the area, the view, and the people. Kerri went as far as to even recommend the place, which she never does.

We were extremely grateful that we headed off our planned route for these last two spots, they truly were just what we needed after hectic weeks.

I don’t typically use this platform to promote a place (and you know this isn’t sponsored), but @thecottagesatshoalbay on East Thurlow Island are just too damn charming, I want you all to know about them. This is exactly the kind of place I’d look for before the boat have a blissful, soul-soothing vacation. The view are incredible. Walking the grounds was just so soothing. Friendly owners. The buildings, pottery shed, community vegetable and herb garden just make for a perfect little getaway. There’s a pub, too, which I imagine is fabulous, but it was closed due to COVID. When I looked up the cabin prices, they were unbelievably reasonable (they must make up for it with us boaters — laundry is $14/load and shower are $10 per person for us!). The biggest expense is probably on getting here if you don’t have a boat, as you need to take a boat or float plane, typically from Campbell River on Vancouver Island. Just across the rapids, about a half hour away, are resorts charging $4,000/night, while this little slice of heaven os around $150–350CAD for full cottages. 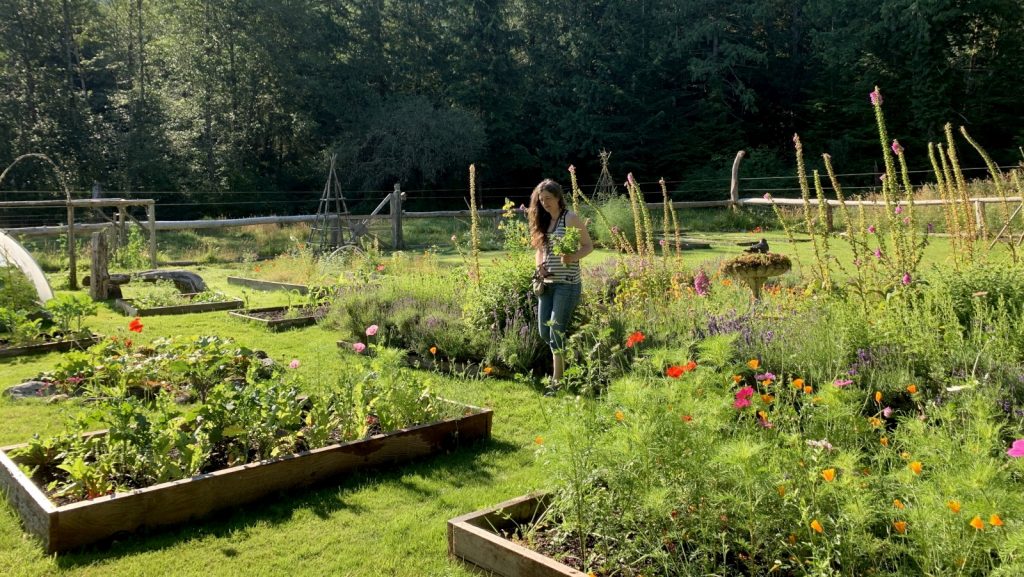 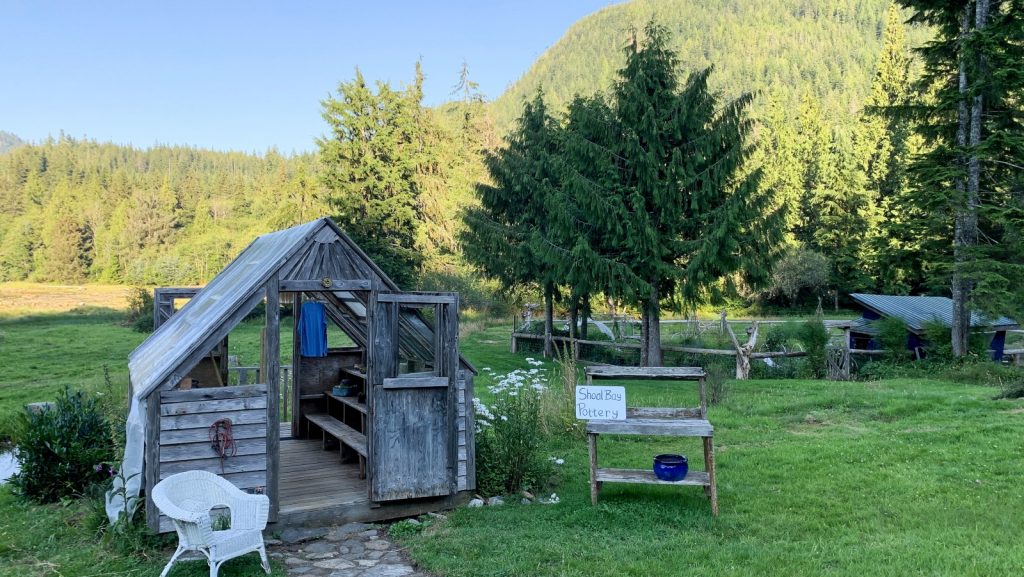 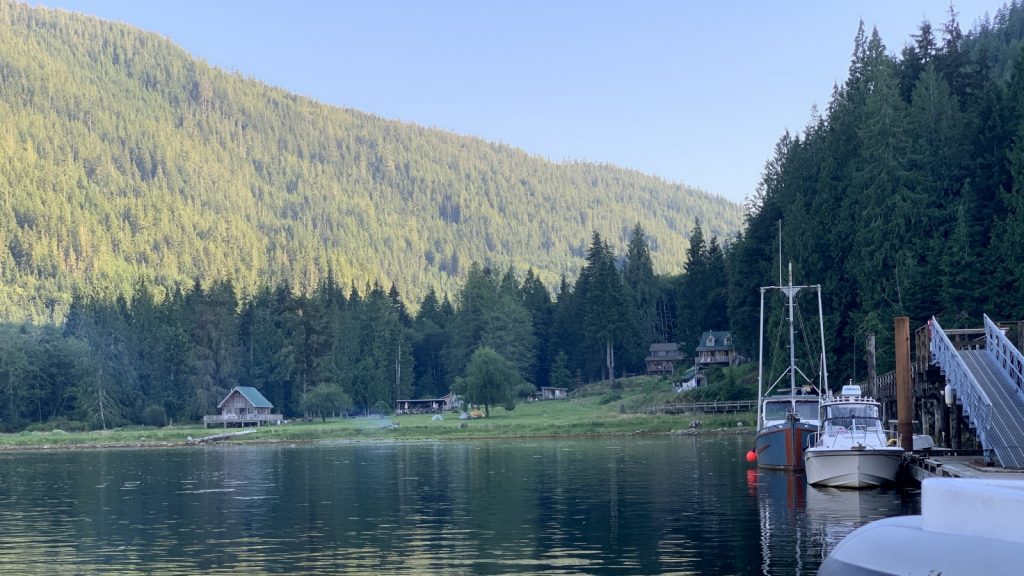 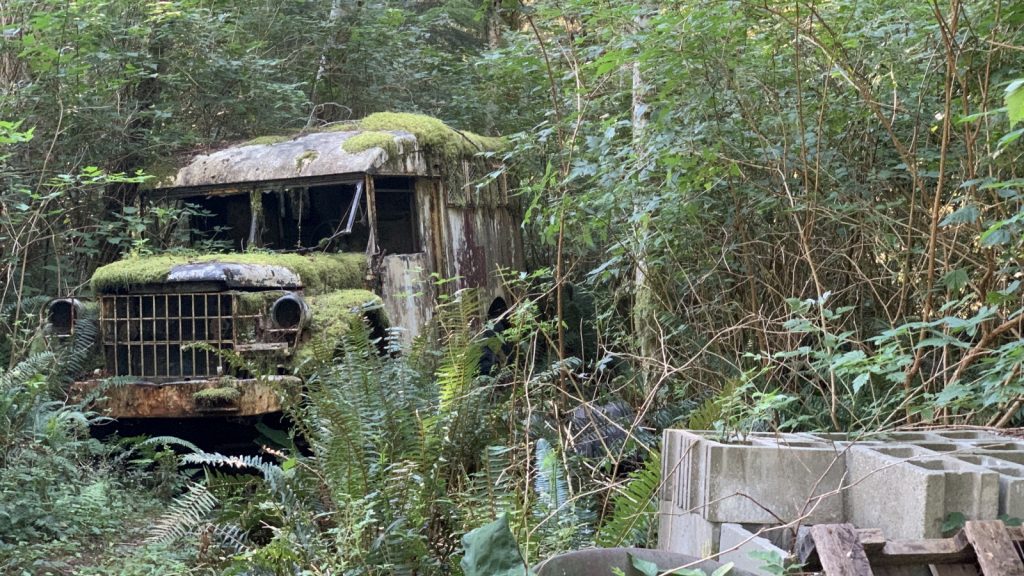 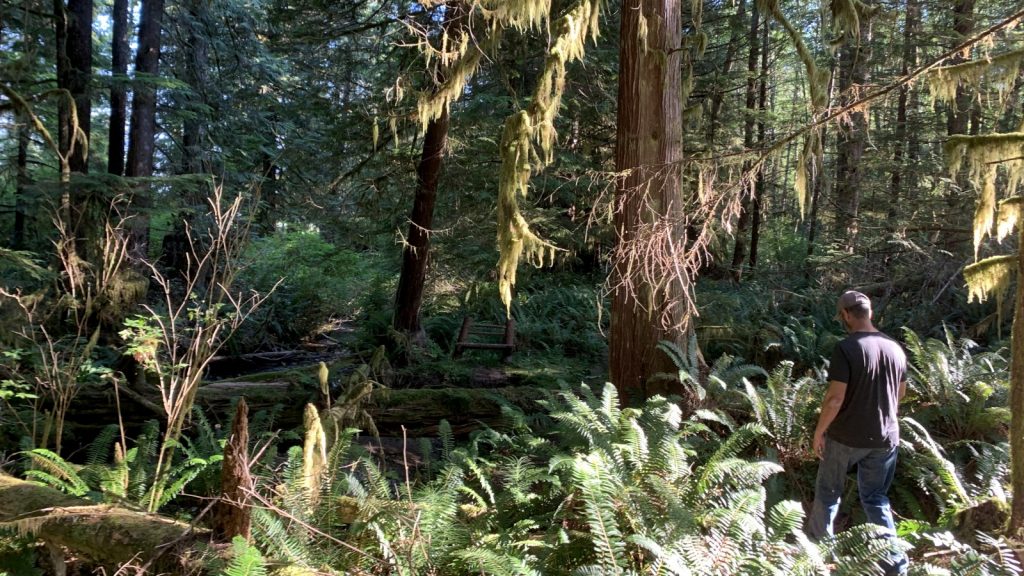 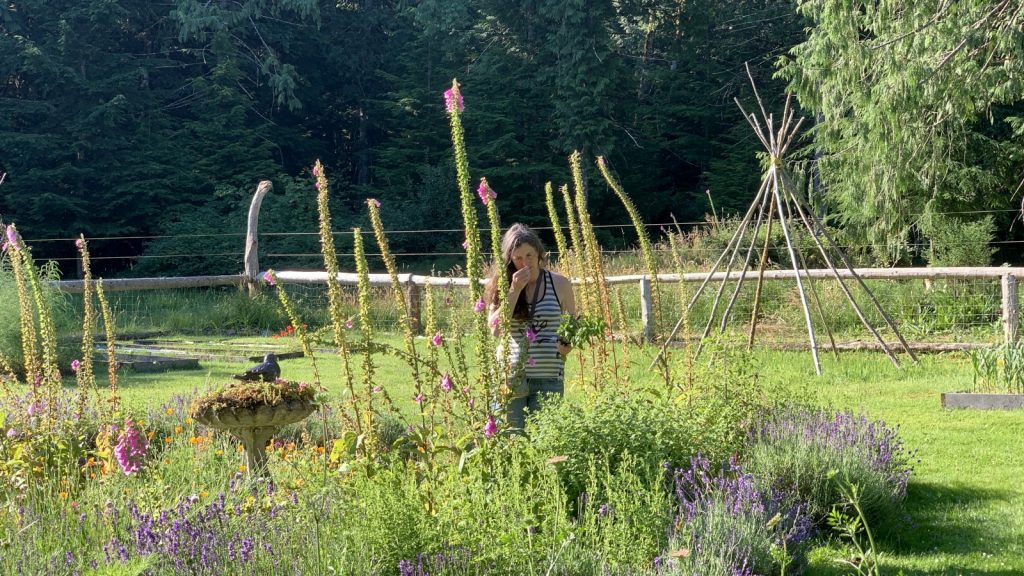