Jumping to Prince of Wales

The next leg of our journey exiting Alaska was to hop from Baranoff Island to Prince of Wales Island. Normally this is not even a concern, but these two islands are separated by a fair distance of open water – water that is subject to the herculean tidal currents of Chatham Strait. Not to mention that the total distance to our next destination was 70 miles or thereabouts. Our saving grace was that of Coronation Island which stood at the half-way point between the two larger islands. 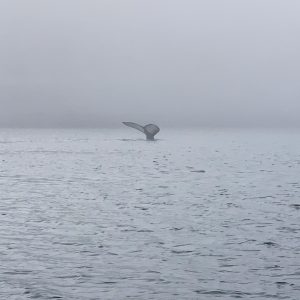 Wales , the humpback flavor, have become a common occurrence this year, and this was no exception. As we were leaving Puffin Bay we received yet another send off from a local whale. Not much caring for the noise of our motor, they often give a single wave good-bye with their tail before we pass. We are grateful for the sendoff, and the excitement of *something* – something not-breaking is even better – happening on a long leg.

We played it on the safe side, waiting the two hours it took to clear Cape Omaney on Barnoff. Once sure we would not be tackled by an Alaskan blow, we pulled the sails up the mast and sailed three more hours across the Strait and to Coronation Island.

I like to keep us trying new things on the boat. I have no idea if they are commonly used by other sailors or not, but I get ideas and want to give them a go. This say was no exception. At the end of our sail to Coronation, just before entering our anchorage, we hove-to (sailing’s way of pulling over on the side of the road). With our staysail still up, the headsail backwinded right up against the other, making it extremely easy to furl it in with the boat at a stand still. Afterwards the staysail was lowered and stowed and we calmly motored to our anchoring spot where we lowered and flaked our mainsail. It was all quite calm and relaxing, which is a great way to end a long day on the water. 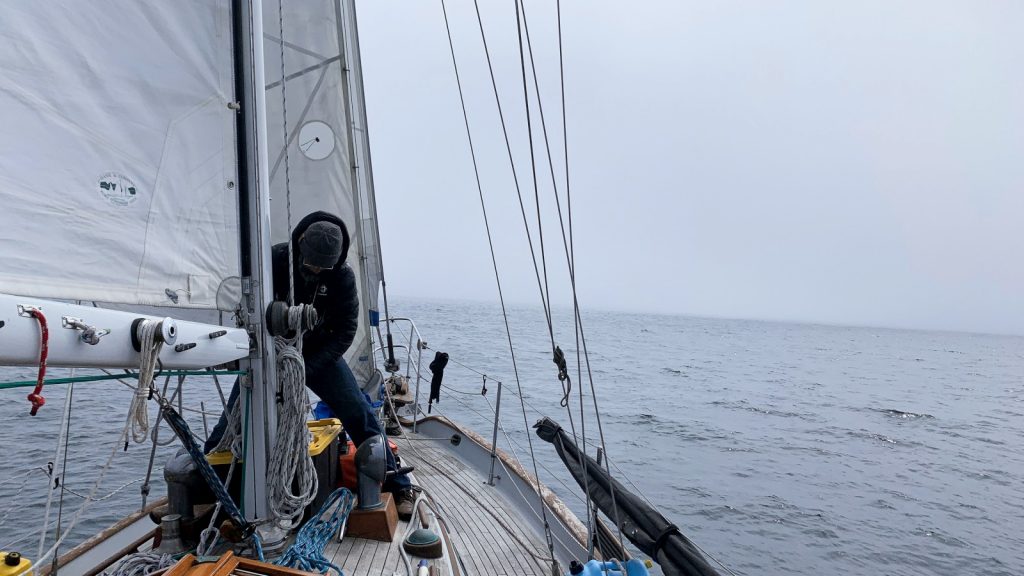 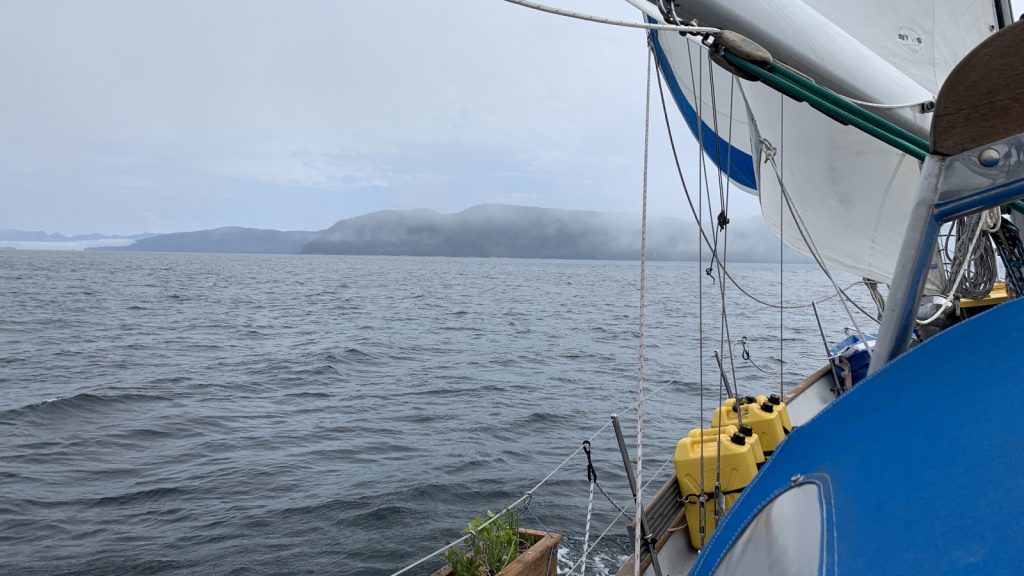 It didn’t take long. Although the skies cleared up during our anchoring, within a half-hour of our arrival the insidious fog that we sailed in all day started its siege on us. Even going as far as to climb the 1500 foot mountain range between us before tumbling over our side – straight out of a zombie movie. Eventually the entire anchorage would succumb to the fog. There was no stopping it. 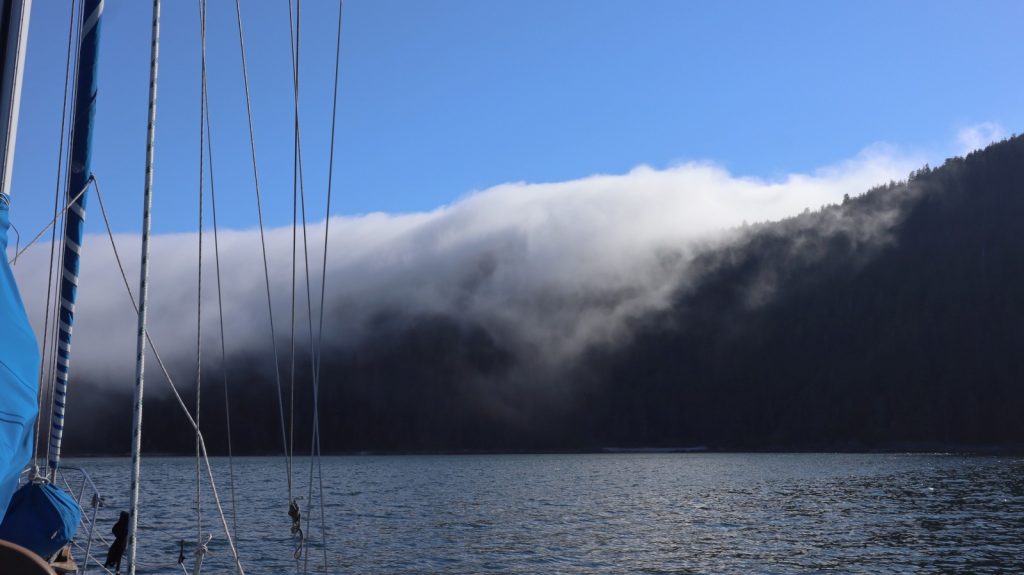 After a good nights sleep we set out to tackle the second half of our voyage to Prince of Whales. Or at least part of the second half. Our sights were set on a small group of islands not that far from our overall destination of Craig, AK. The leg came with no sailing – the motor doing its thing for the six-or-so hours it took. The only saving grace was a sniff of a cell signal which kept us both occupied as we caught up on the rest of the world.

Kerri pointed at the navigation software to what looked like a creek between two of the small islands and exclaimed, “there”. She would do this when we were in the van too; find the most challenging place to get to and call it home for a night. I would always turn out to me amazingly beautiful, of course, and this was no exception. How we managed not to take a single photo I do not know. You will just have to trust me. 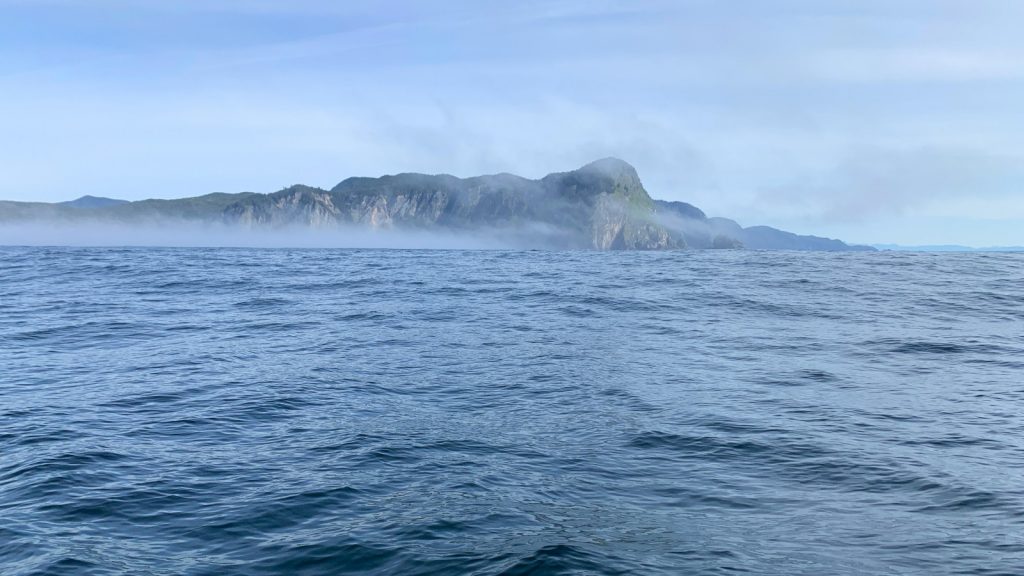 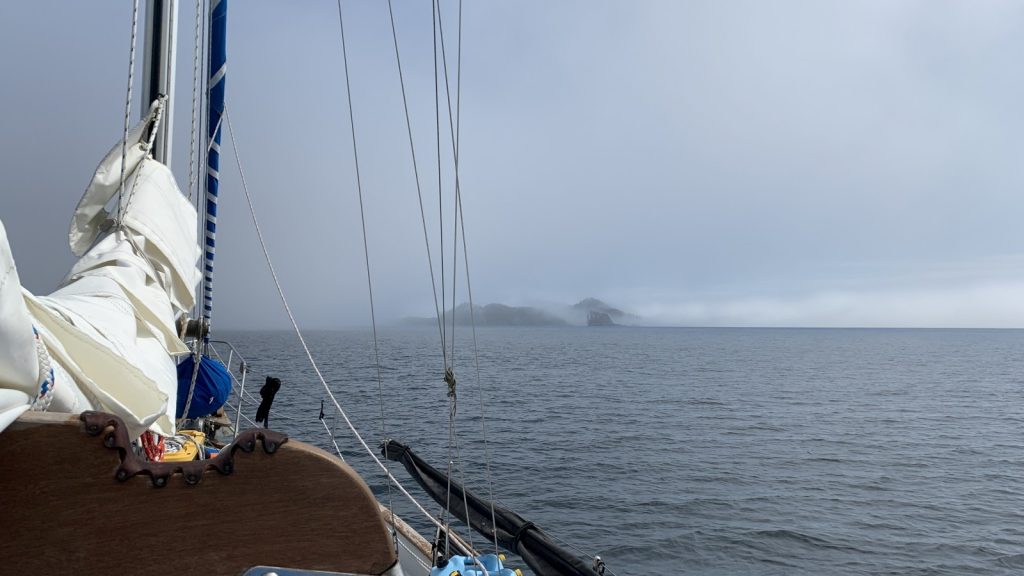 Once again, after only a single night, we were on the move to make it to Craig. First we had to navigate that “creek”, which was barely that. Just wide enough for Meriwether to slip through without rubbing her hips on the rocks, and just deep enough to not scrape her belly in the sand below, we Frogger’d around the rocks and kelp patches. It was a relief to make it though and into more open waters. 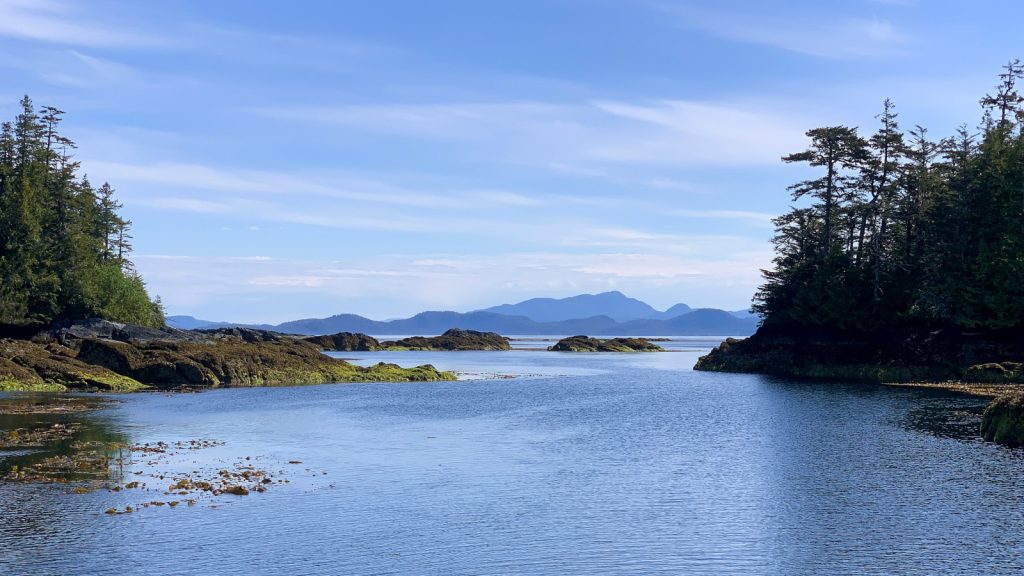 Though only a very shy breeze was blowing, I went through all the effort of raising our spinnaker – full well knowing that the wind would cease all together once the sail was up – and enjoyed a peaceful sail for a period of time. Kerri and I are desperately trying to sail as much as we can this year, but it is not easy in Alaska. Nor will it be in Canada. In 2021 we sailed less than 25% of all our time on the water, and so far this year is about the same. So, when we can put a sail up, we do. The big one is always nice to see. 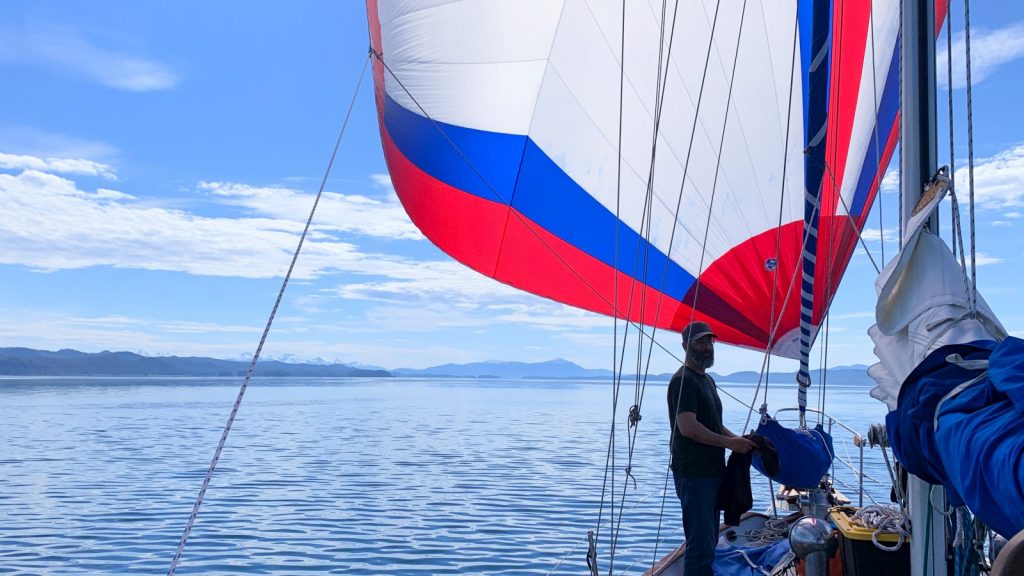 Not really on our list of places to go in Alaska, we chose to do the outside of Prince of Wales only a few days prior. Not necessarily because there was anything specific we wanted to see, but because the guidebook said those magic words, “no one comes out here”. We love places that are free of other humans, so here we are.

After navigating another section of narrows, under sail I might add – cause I enjoy the challenge, we were pulling into Craig where we would start the process of restocking our fridge, laundry, and all the other menial tasks of human existence – boat life is no exception. 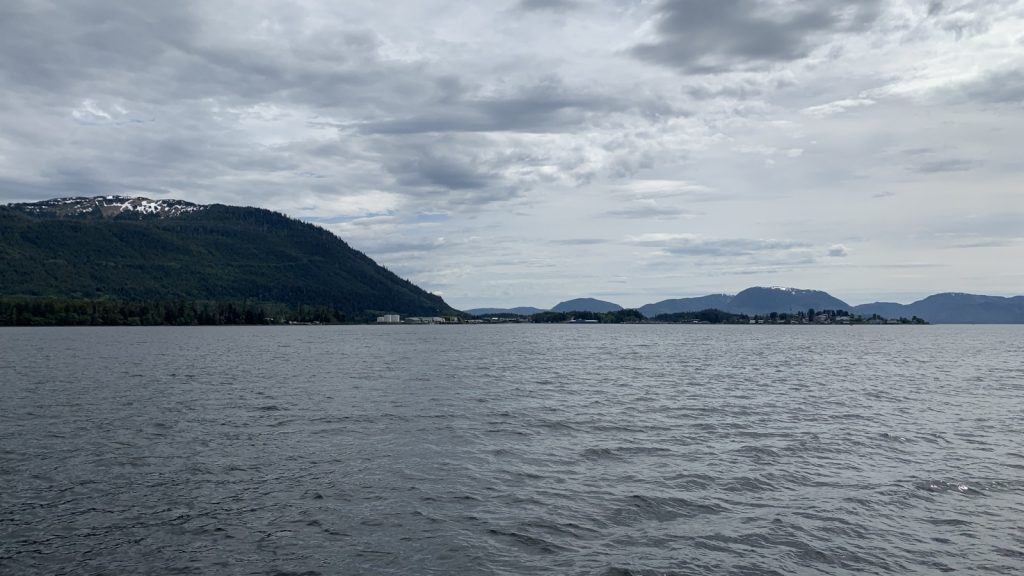 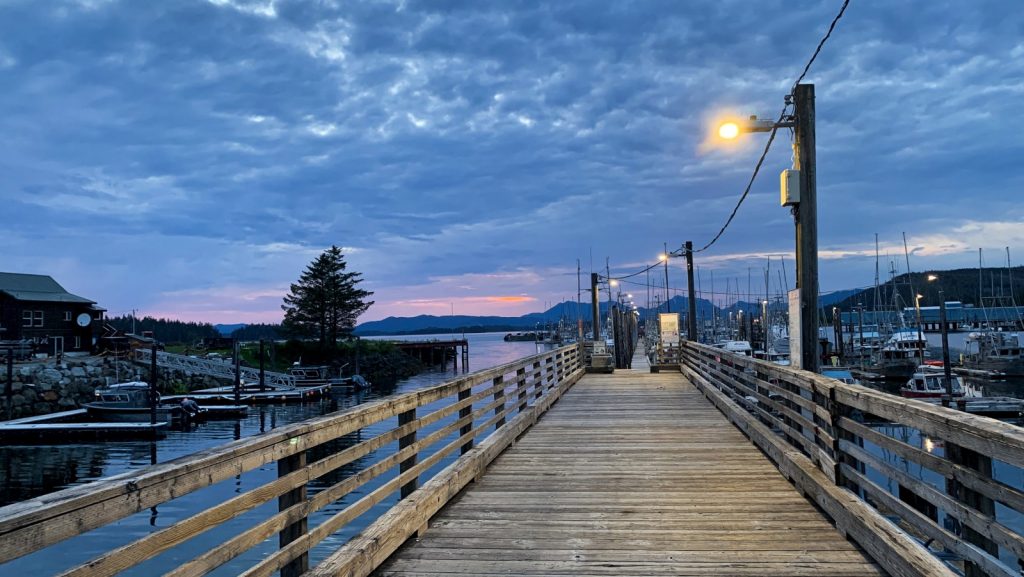