Our second month of winter live aboard has come and passed. By now I am fully reminded just how mundane stationary life is. It is easy to forget when out traveling, on the road or sea, but not today. We have fallen into routine, the worst nightmare of any nomad. At least it is here in Port Townsend, where neither Kerri or I feel sick of being just yet – with is a feat, considering we have rarely stayed in one place longer than two weeks over the past decade. The one activity that takes a huge hit while we are stationary is the photography. It seems we both have the same issue; if we have seen it before, we do not feel much a need to take a picture of it, so the photos are scarce from this past month. Kerri did document many of the old signage on the buildings in town to appease the photo-gods. 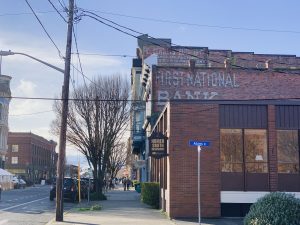 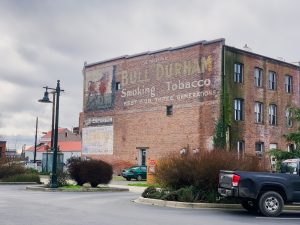 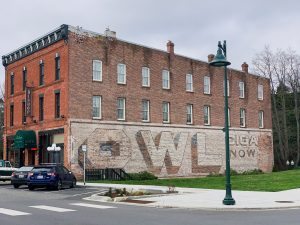 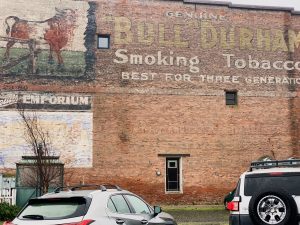 Meriwether has been handling stationary life like a champ – patiently waiting for the day to play in the waters outside the break, but so far we have not gone out for a day sail as we are normally in project mode (read; the boat is all tore up at all times). 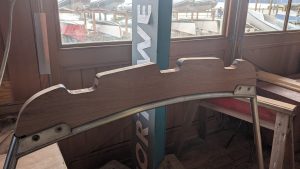 Our second month renting work space in the Maritime Center has been productive as well. An hour or two of wood work each day is all I pull off, but projects are being completed. The latest additions are a built from scratch boom gallows, refinished dorad boxes including new attachment bases (which were the cause of two huge leaks in our past), a new firewood storage box, and a few smaller shelves and such. I must say, making a box out of wood seems to be the most difficult thing in the world. Even while building out the interior of the van I’ve always struggled with plumb 90 degree corners. They are just impossible.

We have been trying to find someone that can build a bimini for us this winter, but the majority of the canvas shops in Puget Sound are usually booked 6+ months out. The one we dealt with last year in Bellingham had an opening in April, but after submitting our plan to them, they declined the job. It felt weird to be turned down of work that we would pay thousands for, and is their business. I guess when you are normally booked a half year out, you can be picky on the jobs you take, and installing a bimini or Meriwether just didn’t muster out. We did eventually find someone locally who could complete the task before the upcoming sailing season, but after a consultation Kerri and I both agreed on bypassing the bimini. The sheer mass of stainless tubing required would completely ruin the look of this beautiful old boat, and neither of us liked it once we saw the picture in our head. Lots and lots of money saved right there. 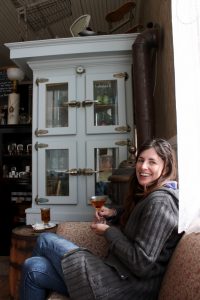 Soon after the start of the new year Kerri and I celebrated our 6 year anniversary. Yup, 6 years ago I found this girl living in a trailer in the middle-of-no-where-california-desert. I gave her some water, cleaned her up a bit, and took her in. I am, of course, kidding – It was me who moved into her home-on-wheels a few months later. We have traveled together ever since. Six years is not a super-long time in the old world – we have both been in previous, much longer, relationships. But, six years living 24/7/365 within 30 feet of each other equates to much longer in a normal-life relationship where each would spend a significant amount of each day away from the other. Sometimes we feel like a couple with decades together, and it feels oddly great. I am a lucky man to have met and fallen in love with this woman, and I know it. 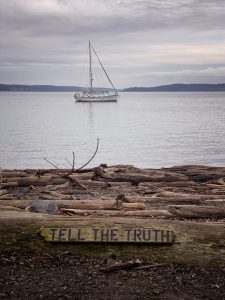 We have been passing the evenings cuddled up under the warmth of our electric blanket. Having run out of shows worth streaming online (thanks 2020!), we started watching Seinfeld, from the beginning. The show, and it’s humor holds up very well for being 20ish years old now. It was entertaining to be reminded of life just two decades ago; VCRs, phones with cords, answering machines, etc. What Seinfeld did, something that wasn’t really visible back then, was touch on – and mock – all the big happenings of the era. A show about nothing, sure covered that age well. Before the end of January, we had watched all 180 episodes in the full 9 seasons of the show. Time well spent. 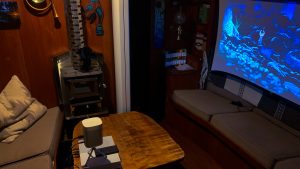 On the nights we decide to do something other than being a zombie in front of a TV show, we do have other activities. Kerri and I both enjoying playing video games, and with the new projector and screen (yes, she bought a projector… because that’s what we do when we are stationary; buy shit), and shore power, we have been playing a bit of coop Xbox gaming. With the right game, we both find that the coop portion of the games really makes us feel closer – having fun and working together. 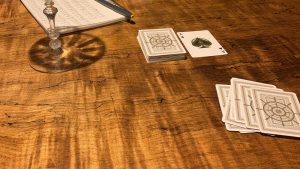 On other days we just need to unplug from it all, so we crank up the wood stove and play a game of “Tim Rumy” (a dumbed down variant of Gin Rumy that I was taught by my mother when I was younger). We have been scoring the same game for many months now, just having a good time. On other nights, we up the stakes and play Strip Tim Rumy (no pictures) which somehow Kerri seems to win a lot more hands on those nights.

All in all we are adapting well to the stationary life. Getting shit done. Having fun where it is to be had. Looking forward to sailing North to Alaska in a few more months. We have decided to extend our stay in PT for another month, now staying through the month of March. It’s not like we were going to go up to Alaska that early, and the weather out on the Sound isn’t going to be all that great so why not get more projects done at safe harbor? At least that is how we talked ourselves into it.

Here are a few more pictures of the best girlfriend ever, because I do like looking at her. 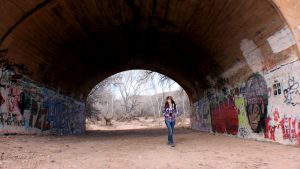 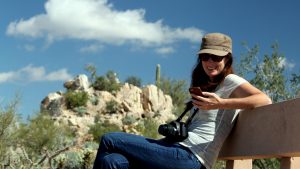 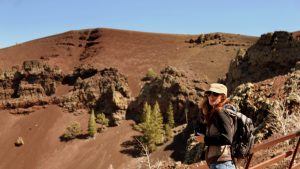