In search of our passports

We have an affliction. It is the nomad blood in us, as well as years of practice. It is a simple one, but one that can either lead to adventure or heartache. Not only do we have a very difficult time staying in one place for more than a week or two (a standard nomad issue), but the affliction demands that we take a different route/road/waterway than the one we took before. This leads me to our current predicament; go north the way we came from – past Port Townsend and across the Strait of Juan De Fuca on the western side of Whidbey – or go out of our way (nearly twice the mileage) to sail up the eastern side of Whidbey Island along a route we had not already done? Yeah… the long way it is.

The difficulty was finding places we can overnight during the long trek – one which we could not accomplish in a single day. There were no good anchorages, so we settled on pulling into the Port of Everett, then hop to Oak Harbor for the work week, and finally to Anacortes via the Swinomish Channel. Plans… I don’t know why we bother. All of it changed anyway. The sail over from Port Gamble went smoothly, albeit spent motoring the majority of the way. Less than an hour was spent at sail, with four or more motoring, but we arrived to the marina without incident. 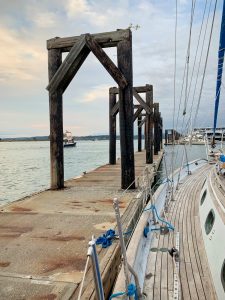 We docked on our first linear dock (parallel parking for those that need the auto analogy) like pros. Kerri’s worried (and sometimes panicked) voice comes over the headset as she thinks we are abut to hit the dock, only to calm as I crank the rudder, spurt the throttle, and Meriwether settles right into the position I had planned. My ability in reading what is happening with the wind and waters around me and how to manipulate Meriwether to do what I want is growing.

What was originally supposed to be a two night stay in Everett morphed into a full week stay. We needed to rent a car and make a run up to Big Blue anyway, and Everett would fill that need perfectly. The visit to Big Blue was warranted due to our inability to find our stinkin’ passports. Kerri and I both have the memory of her “hiding” them some where on this very boat, ‘to keep them safe’. The problem is, neither of us can remember where. We have torn up the boat three times in search of them to no avail. So maybe our collective memory was wrong? Maybe they are still in the van? So we spent a day driving up to Bellingham, to the van as well as all the stores necessary to restock Meriwether’s stores. We were running frighteningly low on booze, or so I was hearing from Kerri. 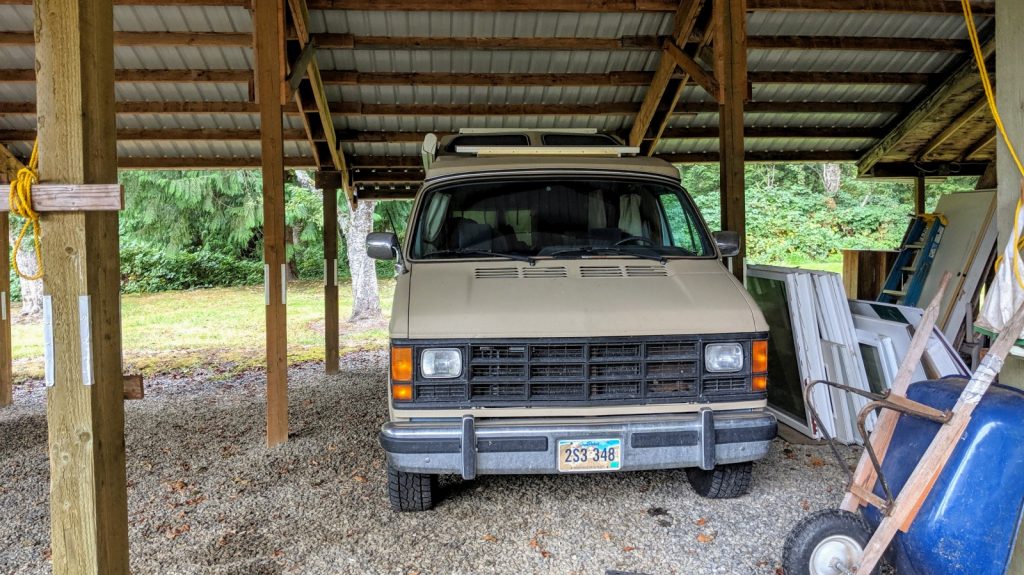 Big Blue held no secrets. The passports were still missing. It was good to see the old guy though, even running the motor for a few minutes (all went well) and clearing out a mouse nest (never leave rolls of toilet paper in a stored van for months). We returned to the boat to tear through every compartment once again. Still no passports! We kept the rental car for another day so we could make the 20 minute drive to the necessary government offices to replace our passports. $200 later my passport issues were on the road to resolution, but Kerri’s was delayed another few days until she could get some more documents mailed in from California. And when they arrived, we needed a third day of rental on the car to  get Kerri’s paperwork filed. By the end of the week we had everything sent in and should have our passports in hand by the first week of October.

You may be asking; why do we need our passports so badly? The third week of October we are flying off the the British Virgin Islands to join five other couples (most of whom we know from our RV’ing life) for a week. Problem is; we kinda need passports to get there. Two boats have been chartered, one of which is in my name and I am the skipper for. If I can’t get to the BVIs, there is no second skipper, leaving two other couples with no boat to board. Nevertheless, hopefully they are all sorted out now.