Rested from the long sail, Kerri and I (Moose too) motored the two miles to our final destination in Hood Canal – the tiny town of Union, Washington. Union is located on the southern shores of the “Great Bend” in the canal. The marina area consisted of only a market-slash-trinket store, a Mexican-food joint, and a small country store across the street. Not much else nearby without a fair distance walking. The tiny marina here allowed us the opportunity to pump out our black-tank and fill both our water and fuel tanks. It was during this process that we got first wind on the hospitality of the locals, who were oddly excited to see such a large boat this far down the canal. 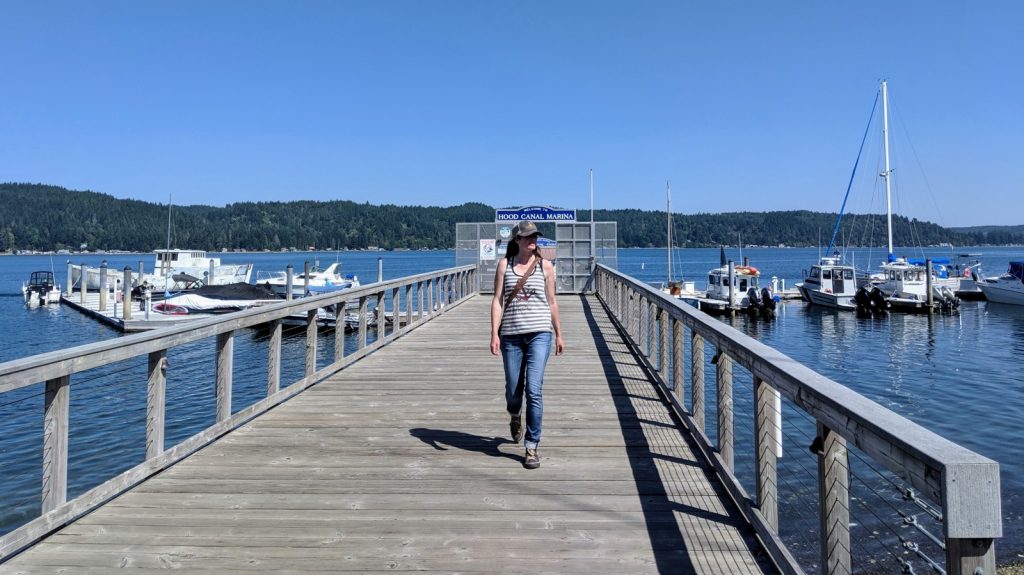 We were welcomed immediately. Told to go ahead and leave the boat at the dock and walk around, shop, eat, whatever – we accepted. Advice was given on where we could stay the night, where we might want to visit or explore, what else is further down the canal, and – again – they were so pleased to hear that we came all this way to stay here. Not many do. It’s a long-ass way for a sailboat – and most sailors do not want to spend two days sailing or motoring just to go down this pretty average looking canal. They are missing out. 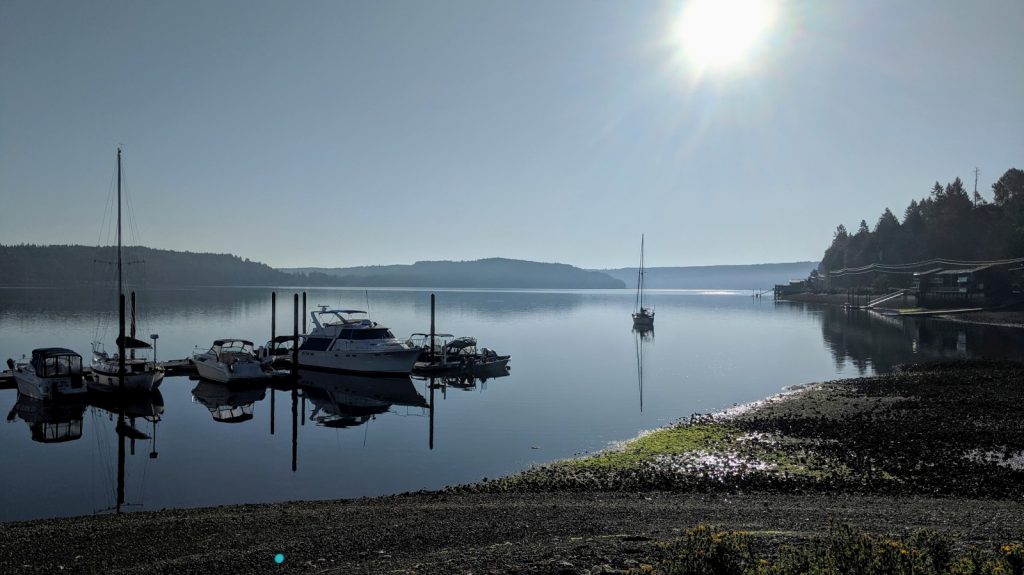 We could nearly step off Meriwether and onto land, which meant Moose would get a lot of extra times ashore. We anchored just off the marina docks, and right in the view of everyone eating on the restaurant’s back patio. In fact, the first night we had a date with Rob (a follower of this blog) and his wife for dinner in which Kerri and I arrived by dinghy to the back patio – that was fun. We spent the evening talking about all our land-based travels (they too come from vans, and met on the road). Just before the sun had fully set, I shuttled us all back to Meriwether for a tour and a sunset on deck. Our dinghy is too small to handle more than two adults at a time, so it took a few trips back and forth, but we all got on the boat, hung out for a bit, and back off an hour or so later. 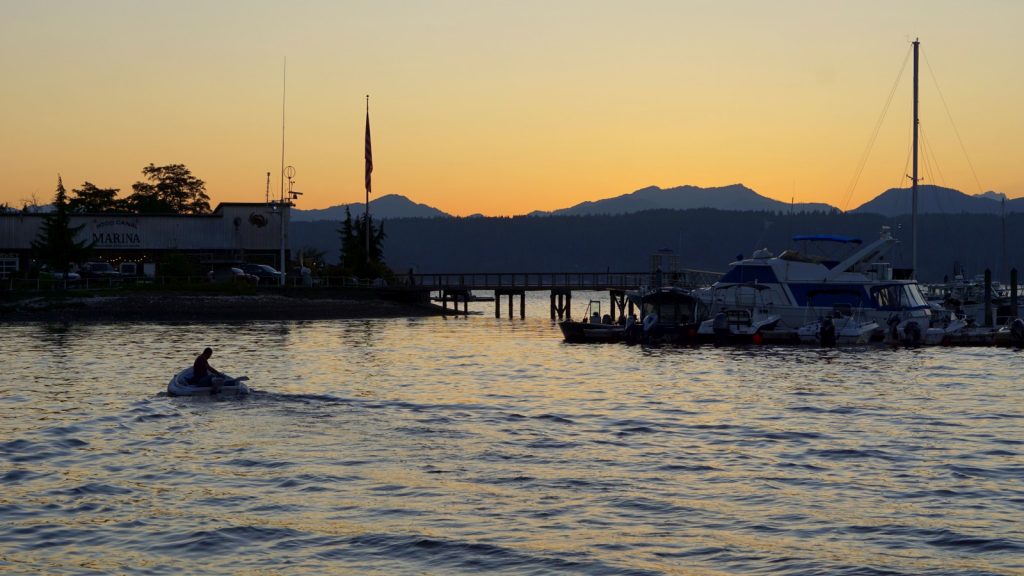 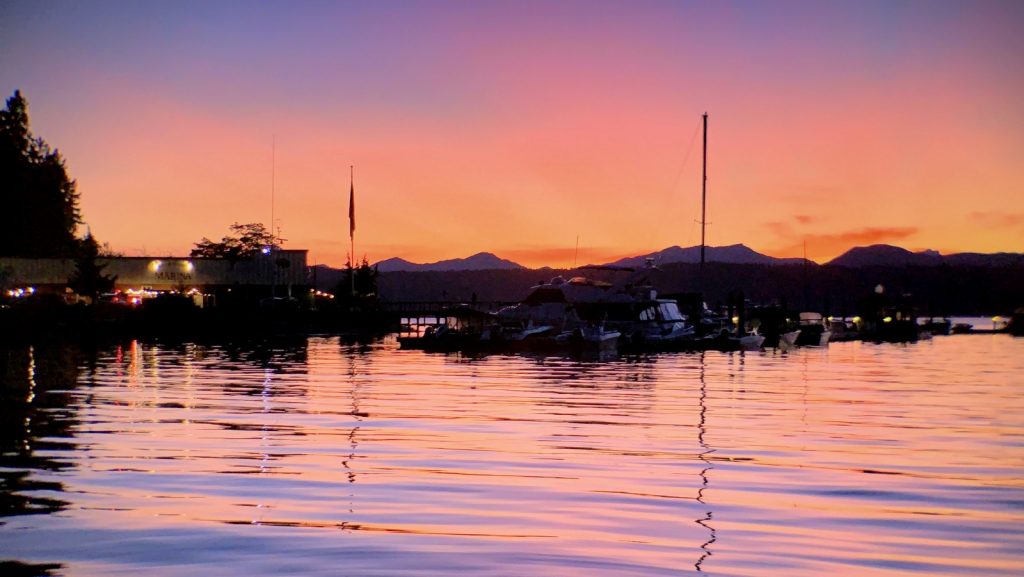 As the work week progressed we were finding some serious comfort in this small town. The locals accepted us in right away and the location – with a great view of the Olympic National Park – wasn’t too shabby. Between the country store and the marina-market we could resupply enough of our foods to keep going for another week without a big trip to a full sized grocery store (Rob was offering a ride to the store and back if we wanted, which was extremely kind). It helped that the country store had some great ice cream by the scoop. Moose and I would go each day after lunch. Extra shore-time is always a good thing from Moose.

Kerri decided to go have happy hour at the resort, a few miles down the road, one evening. Just as we set foot into the dinghy we pondered if we should bring out rain jackets or not. Na… it isn’t going to rain! Seconds later we decided to go ahead and bring them, and seconds after paddling away from Meriwether the clouds opened up on us. Cats and dogs man… cats and dogs! The forecast didn’t even predict any rain, but it was definitely here and in force. We were soaked by the end of the two minute paddle to the docks where we were meeting the resort provided free shuttle in a few minutes time. So we thought… it arrived a half hour later, well after the rain stopped.

We went for it anyway, even soaked. Eventually the shuttle arrived and they were even nice enough to drive us up to the post office where we could pickup a few packages. We originally planned to walk it but the late shuttle ruined that plan so it was especially nice for them to take us there and back to the resort. Just in time too, as the rain (and thunder, and lightning) came back just as we sat down to enjoy a soggy-pants happy hour drink and meal. 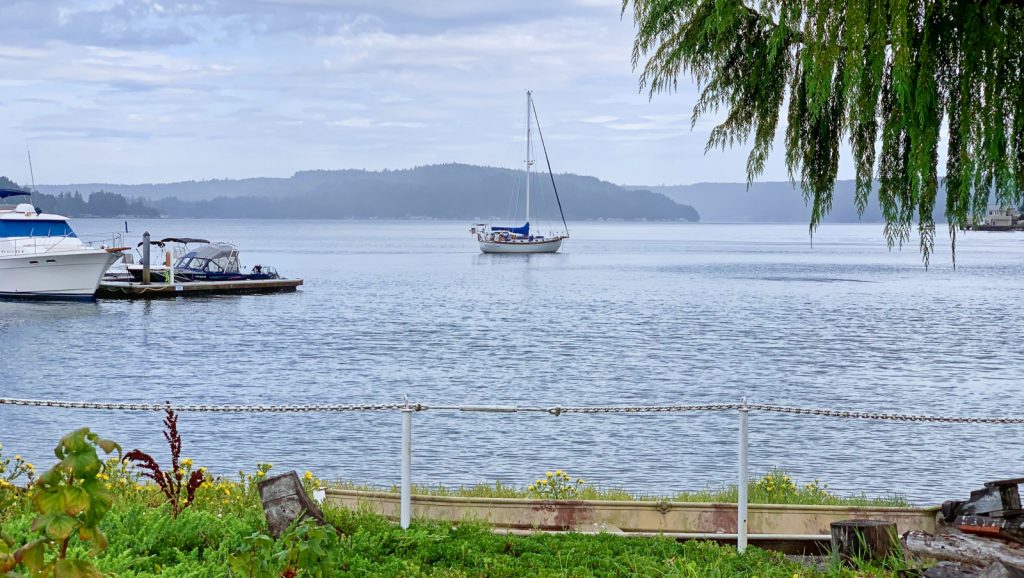 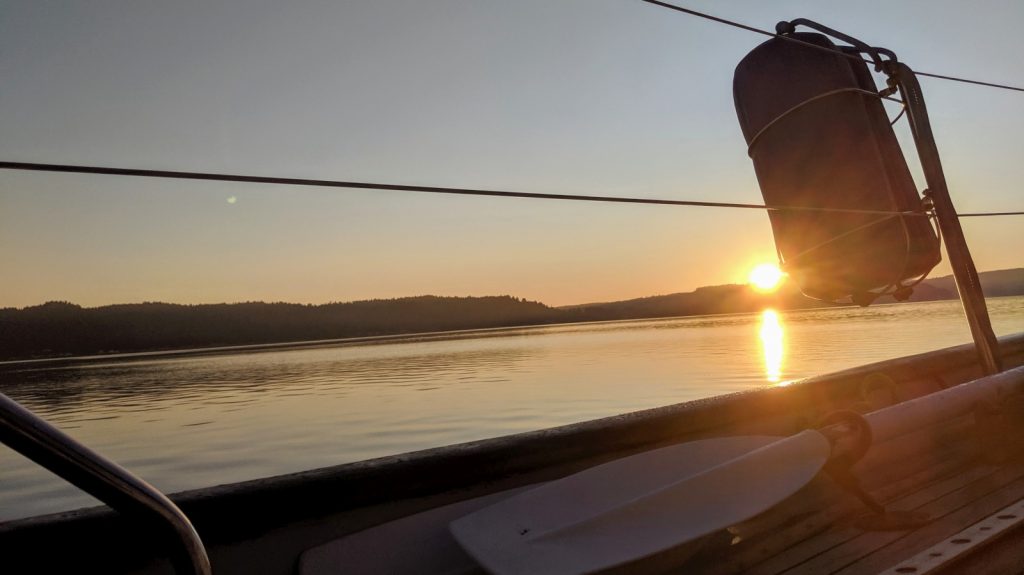 On our final day – Friday – Kerri ended her work day a little early so we could paddle ourselves to the marina where they were hosting a community gathering, complete with a BBQ style menu and drinks. We arrived, took up a seat at the row of picnic tables lied up and ordered up some grub. There we met another local, just popping in for the festivities, who turned out to be a great guy. A plumber slash helicopter-tour pilot, he knew a lot about the area and filled us in on everything over our early dinner. We ended the evening trading contact info just in case we were staying a night not that far up the canal. He had offered a ride to a local restaurant over the weekend if we wanted. We get offers of rides to places from so many people – complete strangers even. The locals out here are utterly hospitable beyond anywhere else we have been in the country. This sailing-life is pretty darn cool.

I did get to spend one afternoon in the water again. After noticing how many barnacles were affixed to our propeller the last time I was in the water, I desperately wanted to get to it with a scraper. A prop with a bunch of sea-life attached is not doing it’s job very efficiently… I figured. With my second hand wet suit and armed with my snorkel equipment, I tore into the task. The water was a bit warmer this time around, making it comfortable enough to spend the extra time cleaning as much as I could while down there. It was extremely gratifying to scrape away at things and see the barnacles rain down back to the sea floor, but that was it for me for the rest of the day. I was whooped as an old man could be, and didn’t move much for the rest of the day. I even got a sympathy neck rub later that night… a very rare occurrence I must say. 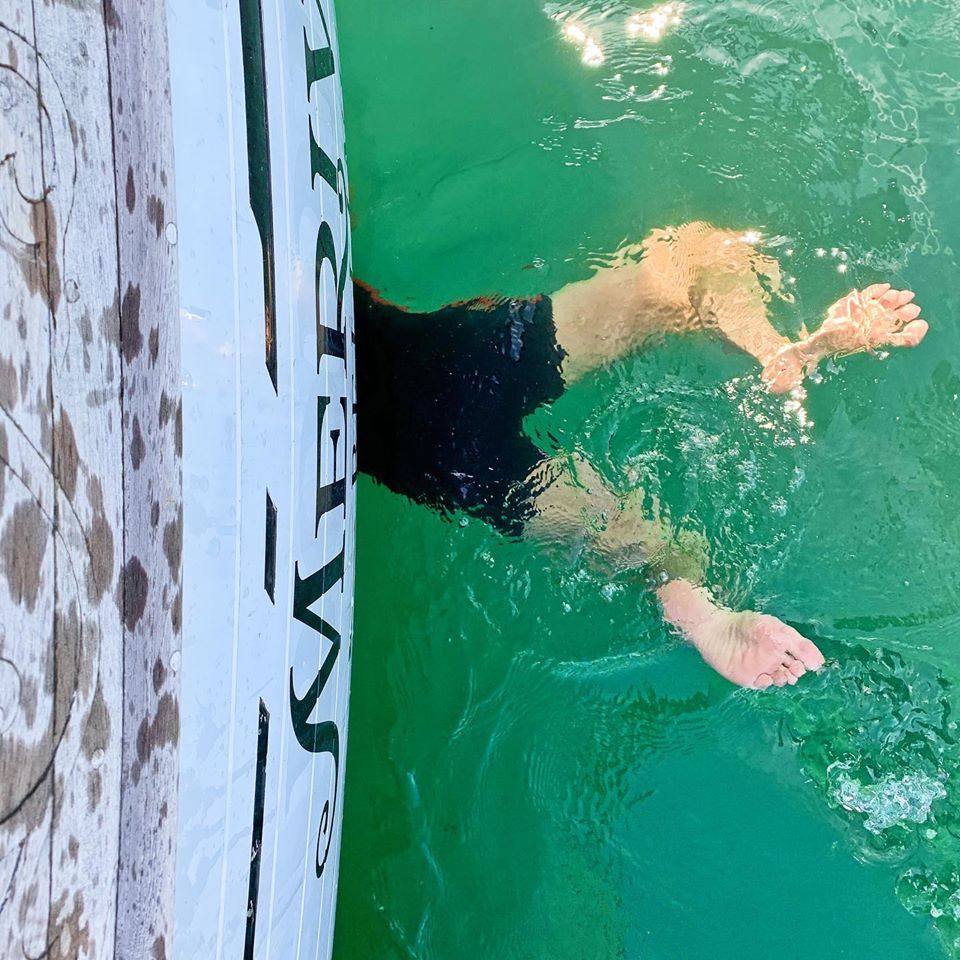