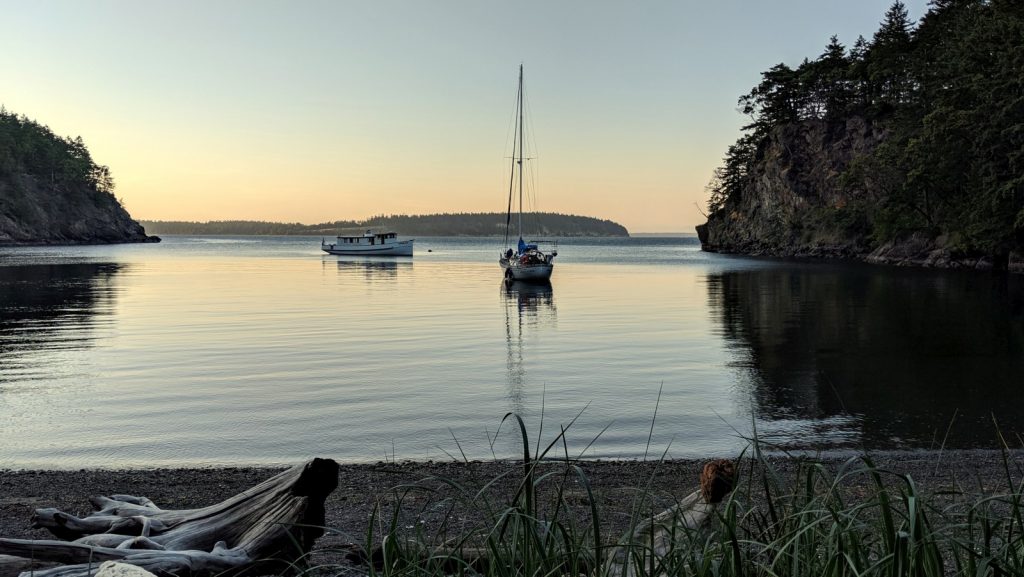 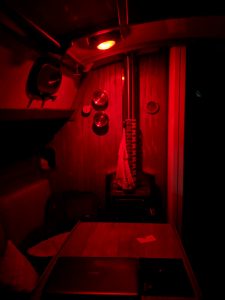 Everything went well for the night. It was peaceful as all heck, and the seas were calm. Kerri didn’t get much sleep – worrying about our anchor(s) dragging. Even I was awake by 4am for the same reason. I got up, enjoying coffee and some alone time before the sunrise, accepting that my time asleep was done no matter how I felt about it. Kerri slept for a few more hours, woke to a fresh mug of coffee, and was enjoying a morning filled with Instagram and Facebook when I noticed Meriwether rotating past my expectations. We were dragging anchor – right towards the tug – on our very first day out.

Not a huge deal really, we fired up the motor, pulled up both anchors, and re-positioned our home on water to another corner of the cove. From our first location, this new one seemed to give us more room. It also allowed us to back Meriwether up to a small waterfall on the shore, which made Kerri happy. As it turned out, we were still heavily restricted by the tug, and now a buoy as well. Kerri wasn’t happy with our position, so we re-anchored – we are getting good at this by now. Once again, we stern anchored to avoid us swinging into the circle of the tug, but we did so too close to shore and did not take the tide into consideration.

A few hours later it had hit me that we may run aground as the tide dropped, so we decided to pull up both anchors and re-anchor further from shore. It was a plan easily executed except that our stern anchor was fouled under a large boulder (so we found out), and in our inexperience the bow anchor was raised first. This meant we were tied to the shore with nothing keeping us away from it. And wouldn’t you know, it was at this time the wind decided to kick up… and can you guess which way it blew?

I spent the next forever-number-of-minutes fighting to keep Meriwether from running aground, while having her ass tied to the very thing we were trying not to hit, and the wind pushing the bow in that same direction. Kerri spent that time in the dinghy, attempting to raise the fouled anchor, which was not working out. Eventually I decided that we needed to force the issue and instructed Kerri and get away from the line. I gunned Meriwether hoping to yank the anchor up, but instead the result was a snapped anchor rope (it was very old and needed replacing anyway). Either way, we were no longer at risk of running aground which was all I could want. Lesson #1 – raise stern anchor first, no matter what.

We reset the bow anchor and spent the next hours trying to find where out stern anchor lay at the bottom of the bay. It was close to the beach thanks to the low tide. We searched by Kerri putting her face in the water with a snorkeling mask on while I flailed about with the paddles in the dinghy. It took a while, but we narrowed it down enough to take a stab at it’s retrieval, which involved one of us going into the frigid waters and picking it up by hand – Kerri volunteered (whew!). Unfortunately, she could not find it before the cold took her over, so she returned to shore. I grew impatient with the whole ordeal, now hours old, stripped down to my underwear and jumped into the cold waters. I spotted the anchor chain, grabbed it, and followed it under a boulder thrice my size. The anchor was peacefully at rest under said boulder, just full on spooning that big guy… it was an awkward scene to walk/wade into. A bit of under water persuasion was used to convince it loose before clamoring back to shore. I would find out later that the bottoms of my feet were shredded from the barnacle infested rocks that I just walked all over. Lesson #2 – wear shoes in these waters

By the time we got back to Meriwether, it was clear we needed to re-anchor once again. That buoy was within our circle, and it was within certainty of us hitting it. So we did, for what seemed like the fifth time anchoring in less then 24 hours. Then we set about repairing the stern anchor line and getting that guy back out there – not as close to shore this time – and avoid (hopefully) the rocks.

Within an hour of it all ending, two things happened; 1) the tug left, freeing up the entire cove (so we re-anchored one more time with better scope and positioning), and 2) a crew came out to remove the buoy from the bay. Seriously?! And not long after we had six more boats in this tiny cove, all stern anchored, for a family-fun weekend. At least that whole ordeal didn’t go down with that audience. 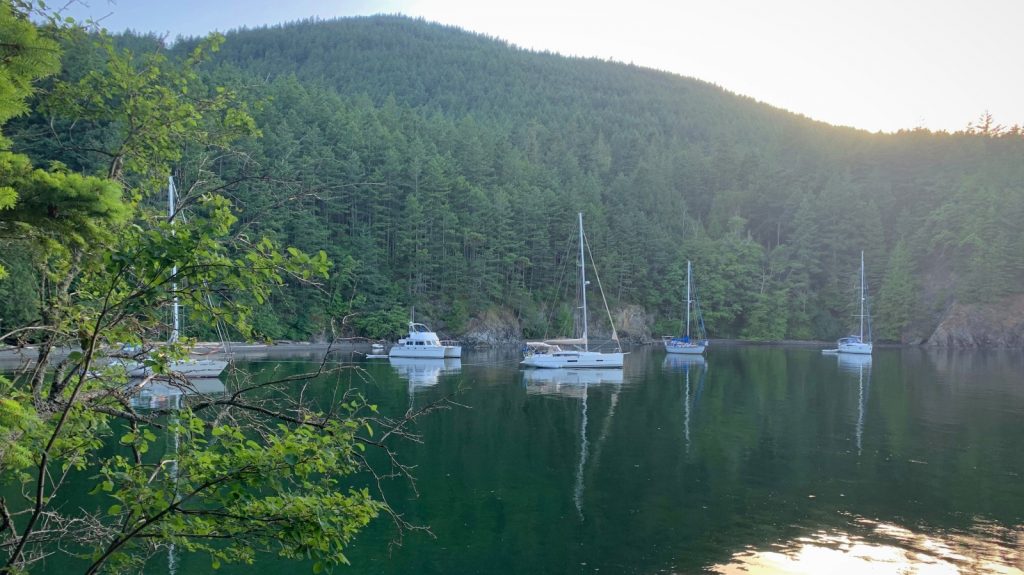 Talking about it later, we both agreed that the real solution to what nearly caused us to run aground would/should have been to cut the anchor line immediately. Before Kerri went off in the dinghy, I did ask her to being me a knife for that very reason but did not make the move. I spent way too long – in peril – trying to save a $20 anchor while putting our entire boat at risk. Next time, that anchor is being donated to the sea much, much faster. Lesson #3 – save the boat dummy, not an anchor. One thing we did do right was to have our headsets on. We were able to communicate clearly with each other during the whole thing, which made a huge difference. 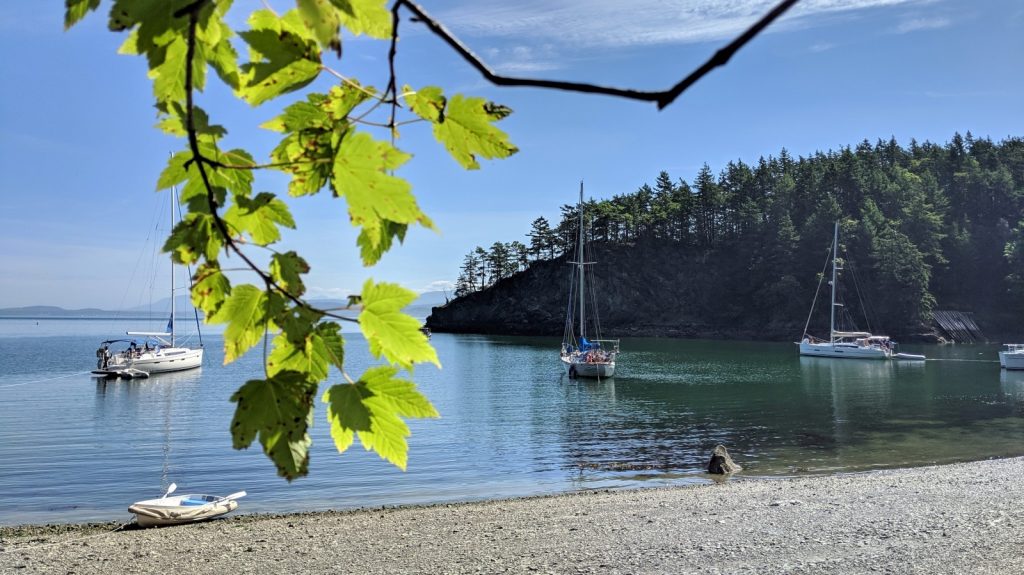